Good afternoon!
I spent the vast majority of this past week tucked away under a blanket in my big comfy chair with Annie Girl, meds, Puffs, and nasal spray--LOL!   (Yes--clinic Tuesday--raging sinus infection.)  But the big news this week was the snowstorm that lasted from Friday night through Sunday morning.
****
I LOVE the snow!  I know...I know...I don't have to shovel it anymore...but I have always loved it.  Been playing Christmas music and got too lovey, cuddly with my autistic Annie Cat so that she went and slept under the bed all afternoon--LOL
****
Anyways, Leah and the boys came over with her brother, Aaron, on Tuesday after they picked up Ian from Preschool.  I stayed in the car with the boys while Leah and Aaron hauled in the IKEA furniture boxes--tada!  Stacked them inside the bedroom by the door there.  Leah brought those bathroom shelf organizers later that night, too, when she came over for craft nite. 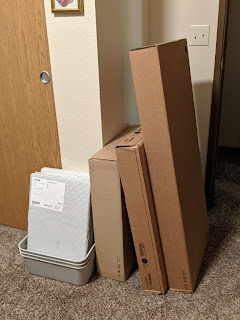 Leah then dropped Aaron off at McFamily's to finish off the cleaning of his old room while she came back to pick me up and bring me to the walk-in clinic.  The nice lady doctor said I was totally inflamed and put me on antibiotics and Prednisone to try to "knock this back".  After that I am to continue with over-the-counter nasal spray and cold medications.  They don't like to give out antibiotics anymore.
****
Leah is still suffering with her sinus infection plugged head and they said the same thing to her.  Basically, they tell you if you are still sick to just go to the drugstore--LOL!  Since they told me ahead of time before I even got any medication that sounded to me like they expect this to hang on and on, so it must be going around.  I googled it and a viral sinus infection is contagious but a bacterial one isn't.  Must be a viral one going around.  And aren't the viral ones resistant to antibiotics, anyways?  What do I know.
****
Regardless, Prednisone and I have spent a week of sleepless nights together.  I could never stay on Prednisone for any length of time--good grief!  I'm totally body tired and brain awake on this stuff.  This is a different steroid than I took for my leg and KT situation...and I thought that one kept me up quite a bit.  Ha!  Try being awake till 4-7am and dozing for 3-4 hours and unable to nap all day.  So glad I took the last of it yesterday morning.  Maybe can get back to sleeping soon.
****
Leah got over here really late on Tuesday night (getting Aaron finally and completely moved out), so we didn't work on the bullet pages or anything.  Gabbed and discussed diet stuff and what the doctor said--health stuff.  And realized that Annie must be around 13 years old!  Leah is planning to try to make it over on Tuesday and Thursday nights for a while so we can get the bullet pages done.  :)
****
On Wednesday Dagan stopped by after work to fill my bird seed bin in the pantry.  Good thing he decided to do that before Thanksgiving because the critters could sense the storm coming and were chowing down like crazy!
****
During the storm even a jackrabbit showed up!!  Several times! 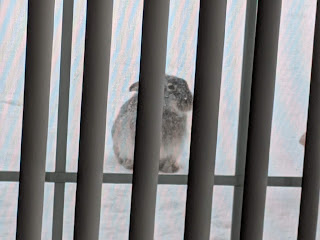 The Bird Cafe was very busy... 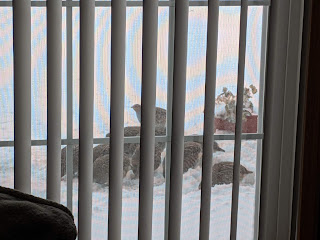 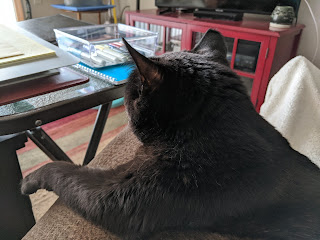 Well, I did get some things done.  Spent a lot of time catching up on letters, watching videos about the new COPPA YouTube rules, learning about oxylates, did my banking/bills/budgeting, washed clothes, watched The Irishman on Netflix and some other shows...and used up a half a box of Puffs tissues.  Not because of the shows--LOL! 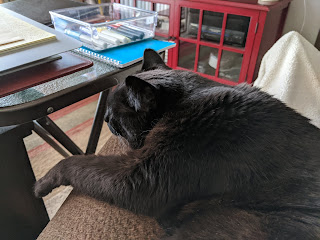 I made a couple of short, silent videos but since I said my videos are for kids (because if I say they are for adults their bot can decide that kids might like cats or partridges or birthday parties and fine me over $42,500 per video) YT apparently won't let me embed the videos like I used to.  So we'll try a link and see if that works.  Let me know, okay?
****
Partridges as the storm was dying down Sunday morning. 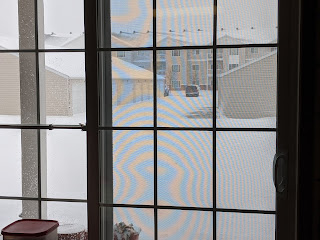 Was really windy--might have reached blizzard speeds. The usual whirlwind outside my patio made some deep 2-3 foot drifts... 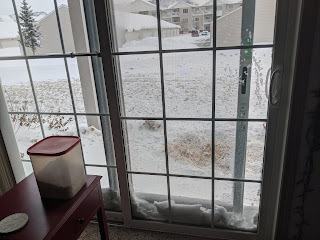 ...yet left that big patch of grass tufts to be seen. 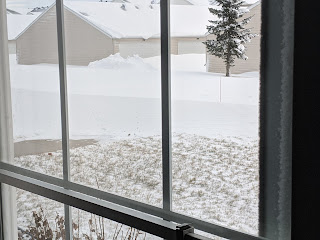 That is another reason my patio area can be popular in the winter.  The rabbits and birds can still get to the grass...the ground. 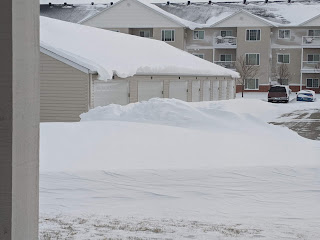 Even when there are drifts several feet high they can eat a little brown grass. 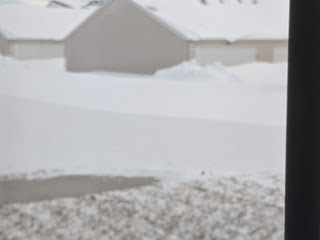 Of course, stopping by the Bird Cafe is a preferred option when it is below freezing. 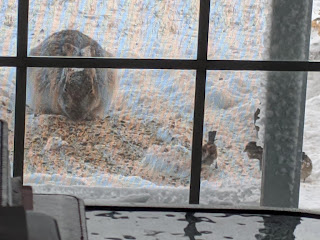 Jackrabbits are always welcome, too. 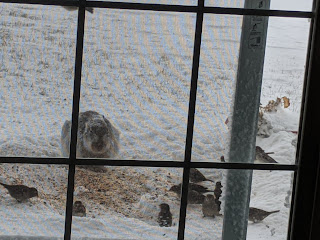 When the wind got especially fierce on Saturday was the only time the cafe was empty.  They were all willing to dig through the snow for a meal during the storm until the wind threatened to blow them over. 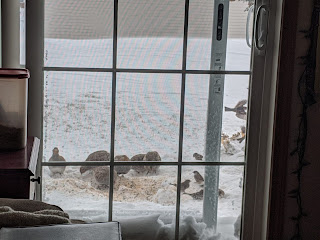 Sunday morning--ahh!  I love the evidence of the wind sculpted across the banks. 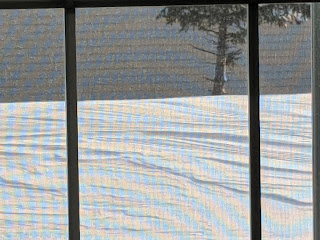 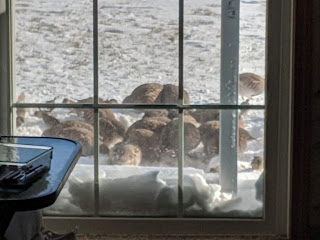 That round furry ball is our friend the lone jackrabbit. 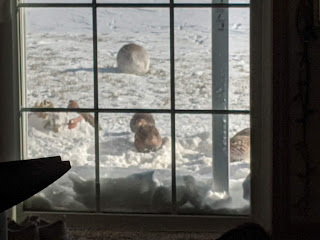 They were all so hungry that they paid no attention to Annie trying to scare them off the patio.  She raced about the apartment in frustration and then zeroed in on her spinner toy...beating it violently until... 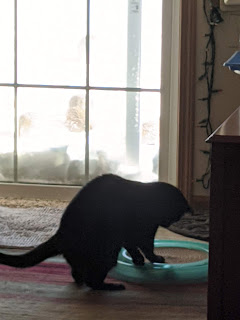 ...she collapsed in exhaustion. 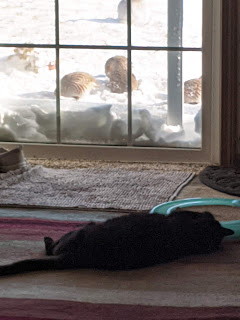 Plows came through a second time on the parking lot across the way and the snow bank is already almost as high as the top of the garage doors. 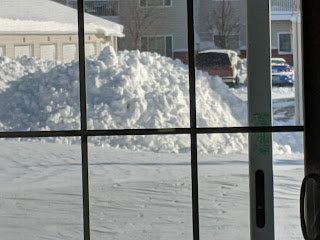 I had to leave the screen door cracked open because it almost froze shut. 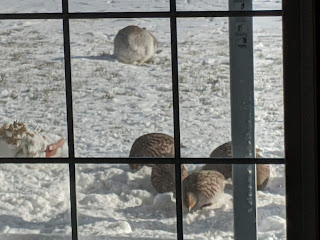 Hard enough time just getting the patio door open--LOL!
****
I have missed the jackrabbits. 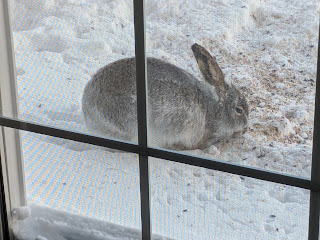 Anyways, that's it from here.  Just planning on trying to get well, keep handing out bird seed, answering more letters, and working on the bullet pages with Leah.  I hope it is a fantastic week for everybody!  Till next time...
****
"We don't have to wait for some grand utopian future.  The future is an infinite succession of presents, and to live now as we think human beings should live, in defiance of all that is bad around us, is itself a marvelous victory."
Howard Zinn
Posted by Rita at 2:47 PM