Good afternoon!
I've already been at this since noon going through my photos, Leah's photos, uploading a couple of short videos (second one isn't finished yet) and trying to get them all on to the blog--LOL!  A bit trickier than it used to be but I am getting the hang of it...I think.
****
Myself, I didn't take many pictures at all this week, as you will see--but I got you kind of caught up on some of Leah's pics since July.
****
Caught a flock of sparrows and didn't even get a shot of the big family of partridges--even though they've been here every day. 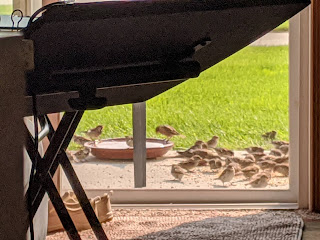 Just been either busy or too tired--LOL!
****
Before I forget, though!  For those of you devoted letter writers, I have to warn you that something has changed besides just the mail being slower.  Remember when if you had a letter that was too fat (over 1/4 inch thick), too rigid, or an odd shape it was 70 cents?  You could stick an extra stamp on there and have covered more than enough for the hand sorting--no problem? 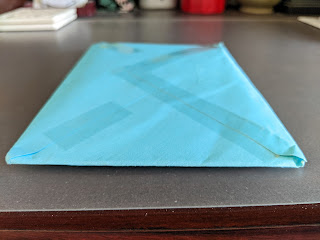 Well, I mailed a couple of pen refills I had ordered for Leah a bit ago (when we were isolating)...put on two stamps because it was rigid with the refills in their little container.  Leah had to pay several dollars before they would deliver the envelope!?
****
Well, I thought that must have been a fluke and some cranky person in the post office made a mistake.
****
Not so, apparently.
****
This envelope that came to me had an extra stamp on it, just as I had done with Leah's envelope and have been doing for YEARS.  With two stamps that is $1.10...but I got a notice that I had postage due of $3.30 before they would deliver my "parcel". 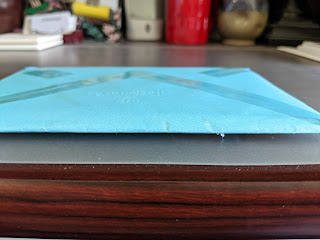 This envelope was that parcel.  ?? 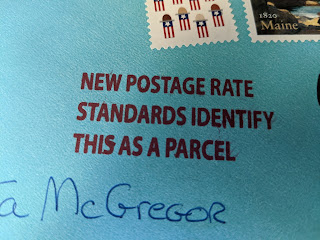 I went to the USPS website online and it still says that an envelope that is rigid, square, or odd shaped is supposed to be 70 cents.  Didn't mention about the being over 1/4 inch thick, though, under the regular envelopes.  So I looked under large envelopes (even though this was regular size as you can see and so was mine to Leah).  Well, they did have a category for over 1/4 inch thick under large envelopes--but still that was $3.80...so how did they come up with a total of  $4.40??  What a mess!
****
Therefore--my days of adding in little goodies in the mail are over--unless they are perfectly flat and bendable--LOL!  Things are changing at USPS so I thought I'd give you all a heads up.  Makes me wonder if anything hand-sorted is now considered a parcel?  And are they just randomly making up prices?
****
Anyways...
Monday I baked.
Tuesday was Ian's first day of kindergarten--from home.  Even so, they took their traditional picture on the front steps of Ian... 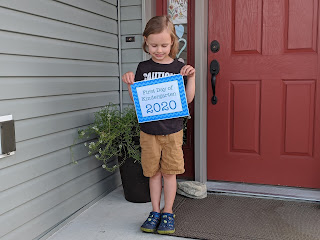 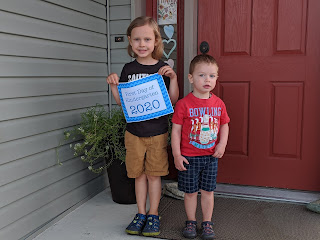 No backpack needed this year.
****
Ian has his school area upstairs in the hallway--cleared out so no distractions. 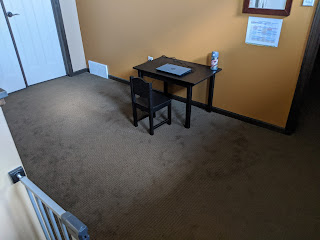 Little table and chair with his laptop that the school district gave him to use. 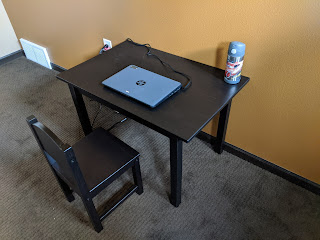 Since then Leah's added some satchels, etc, that I sent over from my place.
****
I did a video chat with Ian after his first day.  He met his new teacher and was learning on the laptop how to mute, raise his hand, and stop the picture but leave the voice on...and demonstrated everything for me.  :)
****
Here's pictures of the McFamily vehicles.  The big burgundy one and the new-to-them little black one... 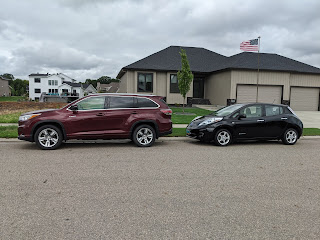 ...which is an electric car!  Nissan Leaf, I believe.  Really cute and spunky! 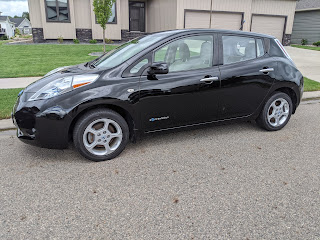 ****
McFamily has been working a lot on landscaping this summer. 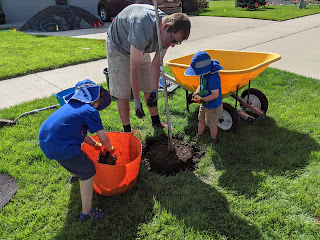 The boys help, too. 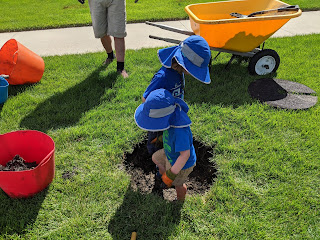 They planted trees in the front yard. 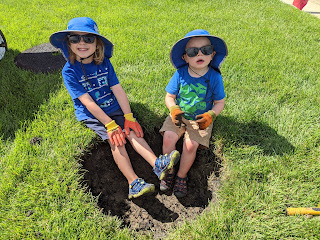 This was back in July, I believe.


Ian took over videoing.  Going to be funny to show this to him when he's older.
****
They've been getting rid of weeds and putting down rocks.  This is one side of the house. 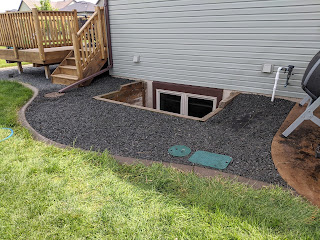 Here is pre-planting after hauling rocks along the back of the house by the deck. 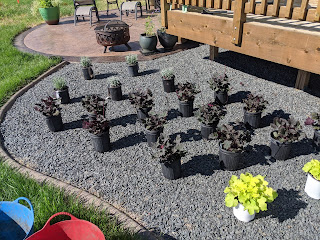 Planning where all the plants will go. 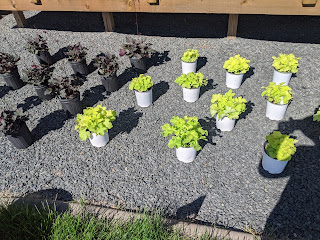 Going to be so nice when they are finished to watch it all take hold and grow. 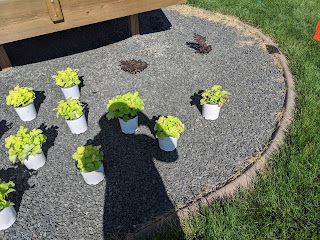 The boys are always such good helpers. 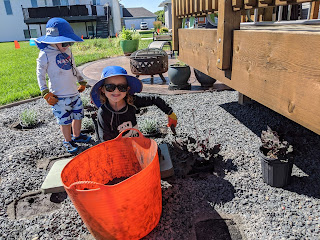 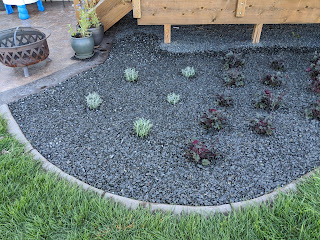 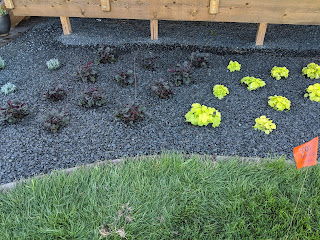 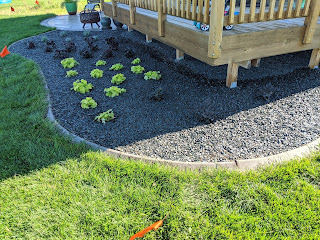 I would like a video of a walk around the house and yard when they are all done. 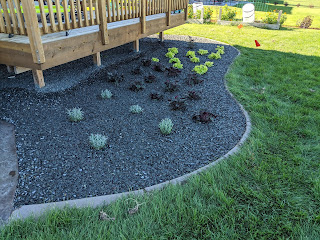 ****
The boys have had a couple of visits with their cousins. 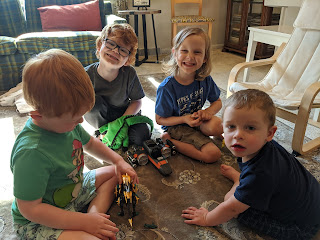 Harder to do the bubble with them since school has started and their parents are teachers.  More quarantining now. 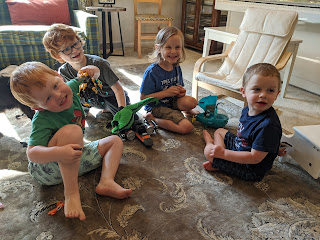 ****
Back to my week...
****
Thursday Leah dropped off a few groceries from Cashwise.  She's been doing the drive up now every week or two.  Looks quite stark at the waiting area. 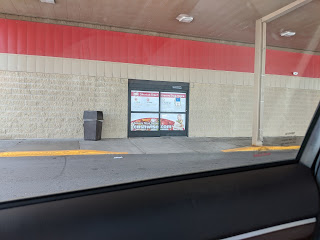 But wonderful that they bring it out and put it in your trunk.  She'd go less if we got everything she asks for--LOL!  Still shortages.
****
On Friday the maintenance man came with the part and spent a long time fixing my dryer.  I was praying he could fix it as I realized that I would be in deep doo-doo if he couldn't...as you can see! 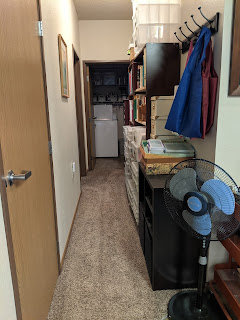 I'd have to remove all those bookcases in order for him to get the dryer out of here!  Never thought about that before.  Gulp!  I hope they never have to be replaced as long as I live here.  Five years and counting...
****
So, of course, I spent most of the day Saturday washing clothes and towels.  I thought I was going to go to visit McFamily on Sunday but Dagan got called in to work for a little while and Leah was doing the last day of an online weekend seminar...so we switched to tomorrow.  Ian doesn't have any classes after lunch.
****
Today...blogging (good 4 1/2 hours again) and making more bean soup.  Am watching Scott & Bailey on BritBox and finally have been back to writing letters.
****
Still feel kind of on a mental/emotional vacation, spending less time online, and plan to keep it up as long as possible.  So much better than being all stressed out over things I have no control over.  Now, sending out positive energy...spreading the love...that is something I can do.  I hope you can feel it!  Won't be long and we can vote!  I'm expecting to get a ballot in the mail fairly soon.  Meanwhile...take good care of yourselves and have a good week--come what may.  Till next time, my dear friends...
****
"We have a responsibility to hold to the power of love that we know to be true, and to not allow the world around us to deaden that in ourselves."
Lucas Johnson