Good afternoon!
What a week and what a time I had trying to get photos on to the blog.  Suddenly this time I had to load one picture at a time because otherwise they popped up in reverse order...and occasionally, even when I was doing one at a time, they would pop up in random other spots like at the beginning or before the last one I posted!  How can it get even worse from week to week--LOL!  Good grief!
****
Regardless I am here.  I bit later again.  I think I find myself procrastinating because of the new format, to be perfectly honest.  I have been busy making soup, sweeping the patio, puttering about...but it was time to tackle the new blogger again...and then I find out it's worse than last week--ROFL!
****
Anyways, I think I told you we had some super windy days.  Blew all the red leaves off the tree to the right. 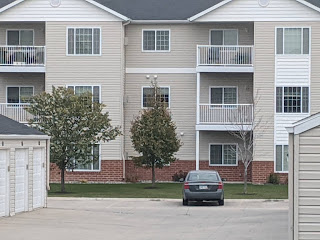 Also blew over both my coleus planters.
****
Really been one of those weeks.  I had taken several pictures of the partridges but discovered only one worked. 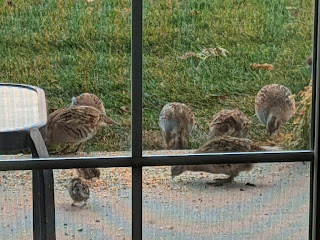 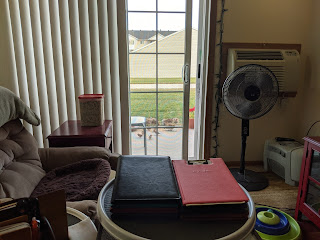 My camera on my cell phone is starting to have a mind of its own lie to me.  Even when you enlarge and the picture you can see on the screen IS enlarged--that means nothing to my cell phone.  Even when I manually make sure it says 7X and touch the screen to focus the enlarged picture...truth means nothing to my cell phone.  Lying has become a pastime as it loses it's circuit brains.  So now I don't know what I will end up with for pictures.  Wasting time is fine when I am taking pictures of a stationery object, but photos of critters and little boys are fleeting moments.  They just don't make things to last in the tech world.  Why would they?  They make more money this way.  *sigh*
****
Tuesday I finished switching over to winter clothes and packing up the summer stuff.
****
Wednesday I woke up with this mysterious rash on my left forearm. 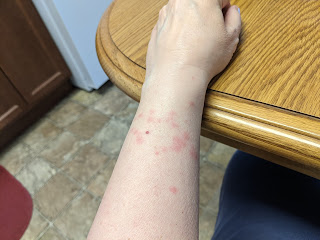 ****
I did a video call with Ian.  Went through the personal plan from Dr. Kessler and the general plan she has for people with fibro/autoimmune diseases.  That night Leah and I had a long video call.  I hadn't had the chance to tell her about the appointment and the plan.  Made an order for the supplements and vitamins I'll need to try.
****
Even though I ordered them all at once, I plan to introduce them slowly--one or two at a time--to see how I react to them.  I often do have reactions so I want to be able to track down any culprits.  ;)
****
I am going to be shifting over to this new Kessler Plan over the next month or so.  Eliminating dairy is something I have never been able to do altogether.  That will be difficult, but I am going to gradually cut back until I am dairy free in the next few weeks.  There are other things, too, of course.  I go back in four months to see her and check in.
****
Then I had hauled out all the leftover cards we've accumulated over the years.  Leah wanted a few birthday and Christmas cards so we went through the cards, too, on our video call.  :)
****
Here's all the birthday cards. 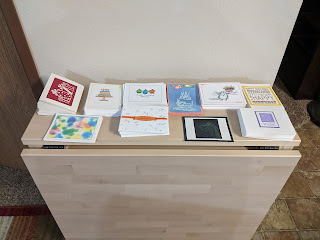 I decided that I had enough leftover from several of the years that if I combined two sets I'd have enough for a year.  They wouldn't all be the same, but they would be handmade, anyways. 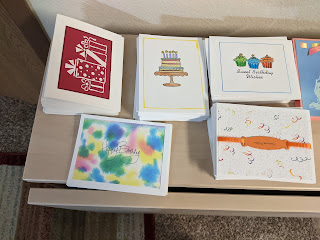 And Leah wanted just a few to have around because she doesn't regularly send out birthday cards. 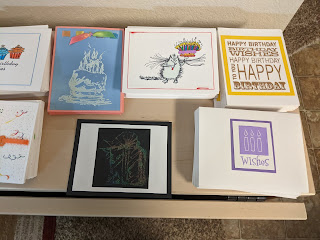 Then--Christmas cards.
I had decided that, even though they are Christmas cards, there are quite a few of them I could just use for just winter cards to send letters, you know? 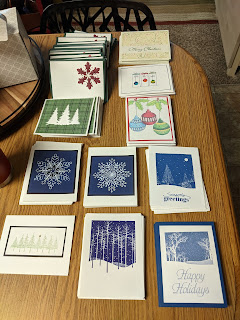 So, my snail mail pals, you may be getting letters tucked inside of past Christmas cards. 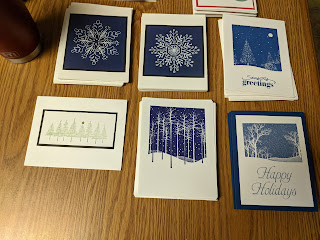 If ever there was a year to spread around some extra holiday cheer 2020 is the one, right? 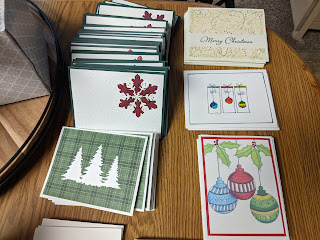 Then I bagged up all the birthday and Christmas cards we didn't want to use, added envelopes, wrote "free" on the zip lock bags, and walked them down to the entryway of the building that night before I went to bed. 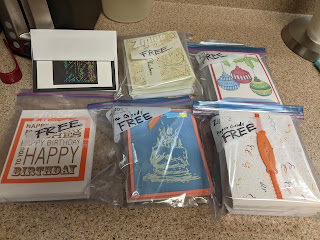 They were all gone the following day.  :)
****
Meanwhile--the rash got worse and bumpier. 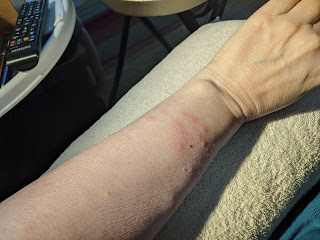 I wasn't sure if it was from the coleus bushes because that's the arm I stuck inside of them to right the planters...or it was something I picked up from when they drew blood at the clinic a few days before because that is where he held my arm...or if it was shingles...or some odd thing I was allergic to and only managed to touch on one arm?  But it was red, bumpy, swollen, and itchy.
****
Thursday I did some laundry.  (Was washing towels, etc, a lot in case this could spread--but it hasn't.)
****
We've had a bit of sun here and there but it has been cold.  We had snow on both Friday and Saturday morning, but it melted by the afternoon.  I wondered how it could melt when it was only in the 30s--LOL! 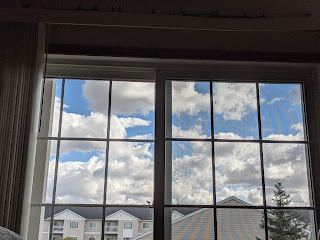 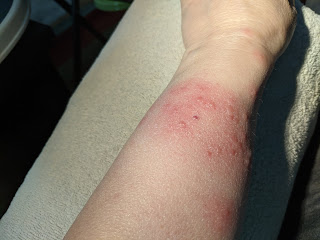 I have been using aloe vera gel, anti-itch cream, diaper rash cream, and apple cider vinegar.  All of those have helped so that it hasn't itched so much. 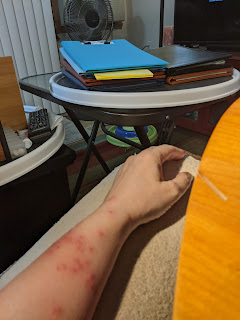 ****
Leah came over Friday afternoon and trimmed the bushes next to my patio better on the back and sides next to my planters. (A man had come around but he didn't do a great job.)  Since she was coming over with gardening supplies she cut back my planters for me, too, because they were all dying due to it being in the 20s at night.
****
Leah carried my patio chair, I hauled the little tables and hose pot on my cart, and we walked them around the building and to my garage.  Then Leah left to go do a Cashwise grocery pickup.  I hauled the bins of summer clothes and the big watering can out to the garage and then pulled back a 45# bag of bird seed.  A little while later Leah was here with groceries and I met her in the parking lot with my trusty cart.  Leah and I had stayed away from each other all day because I am still in quarantine from going to the long doctor visit with Kessler.
****
Looks pretty bare out on the patio now. 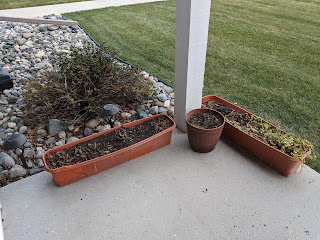 But the birds still come to the less lush Critter Cafe. 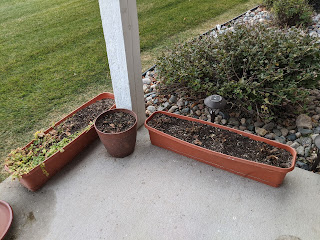 They are all trying to fatten up for the winter.  Looks like it could be a long, cold one, too!
****
Saturday got an email from my brother.  Mom is now officially in hospice...mainly because she has fallen a couple times and she is having trouble with the swollen legs.  If those issues come up their requirement is a trip to the hospital to see a doctor...unless a person is on hospice.  Then they have a nurse right there for emergencies and Mom wouldn't have to go to the hospital anymore...or to a doctor's office for appointments.  She hates to be rushed off in an ambulance and that has happened twice, I think.
****
So she is happy about that.  And she should qualify to get a lift chair, rails for the toilet, and a hospital bed.  Mom is getting so frail and her balance isn't as good anymore, so she sounded like she really appreciates that she could get more help.  I think she'll get regular visits from a nurse and I know she already has an occupational therapist come to help with her strength and balance.  I'm just glad that she is glad to get the extra help.  :)
****
Mom and I chatted about how hard the holidays are going to be for so many people.  She isn't used to being alone for Thanksgiving or Christmas.  She's used to being with friends when she was in Florida or family since she moved back to Minnesota.  I think it is going to be hard for her.
****
Myself, I have been used to being alone for the holidays for over 20 years.  BUT--McFamily and I have always had our own private little Christmas get together sometime after the holidays.  Hopefully we'll be able to do that in our bubble this year, but you never know.  Regardless, things won't be really any different for me.  But I do remember the first few years after I moved up here to Fargo/Moorhead and how different it felt to be alone.  I told Dagan to go visit his dad's side on the holidays since Dagan got to see me all the time and he didn't see them very often.  It was weird not to see him at first.  And then when Leah came into the picture they had his dad's side and her family's side.  I had spent years doing all that running and switching and driving...
****
I am so used to my peaceful, non-bustle, quiet, solitary holidays now that it would feel really strange to have a big Thanksgiving or Christmas on the actual day.  (We don't always do a Thanksgiving after, but we have always eventually had our own little laid back Christmas.)
****
So there will be no change for me.  I feel so badly for people who have never spent Christmas alone if this pandemic year will be the first time for them.  Be sure to call them, write to them, zoom them or whatever.  It will be lonely for people who are not used to being without the big family gatherings.  Spread the love.  :)
****
Can you tell that seeing snow has got me thinking winter--LOL!  ;)
****
Well, another week flew by.  If the rash has not disappeared by Thursday I won't be over to catch a bubble visit with McFamily before my BP check on Friday and more quarantine time.  It has gotten better, but not sure it will disappear in just a few days.  In fact, I will take a picture right now to show you.  Might be hard to tell but it is less bumpy than it was.  Let's see... 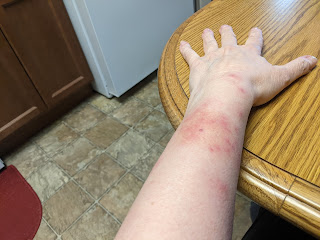 Yah--hard to tell, but less bumpy.  Has anyone ever had anything like this before or seen it before?   I am really tired of mysterious stuff happening to my body, I tell you.  Enough already--LOL!
****
Well, the soup is smelling good.  The dishwasher is churning away.  Annie is hiding somewhere taking her afternoon siesta.  It's only 35 degrees (1.7C) and they say 100% chance of snow again tomorrow.   I don't think we will get that much, though.  Seems to be dumping more to the south of us and even to the west.  Critter Cafe has been busy...and probably will be till spring--LOL!
****
Stay safe out there!
(What cop show was that from?  It's on the tip of my tongue!)
Till next week...
****
"How we treat each other is the only thing that matters."
Samite Mulondo
Posted by Rita at 5:50 PM