On the cusp of the day, I guess, when I started.
Blogger did not allow one single comment to my email box this week.  I do comment on your blogs, though, when I can and read every one of your comments before I post them.  This may be the way it is from now on, I guess.  Also the videos seem to be smaller in size no matter what I do.  Oh well.  Adjustments and adaptations are forced upon us.  Nothing much we can do about it.
****
Well, we had a dusting of snow early in the week.  So windy that it blew the dry snow down into the grass and caught it along the edges. 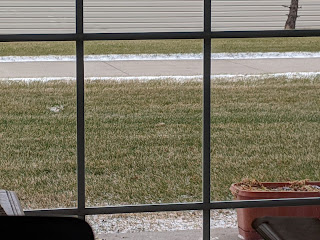 ****
Big news!  Caroline is going to a new job with a different company come the new year.  Since she has two jobs at her present company (office and cleaner) she is asking if she can keep me as a cleaning client.  After she was promoted, they kind of bent the rules and let her keep a couple of clients she had for personal help visits.  But they might not let her keep me when she leaves her main job there.  Both Leah and I wrote letters asking to keep her, but who knows?  She's been with me since around 2006!  She'll let me know as soon as she hears something.
****
Annie doesn't like any visitors whatsoever so she doesn't care. 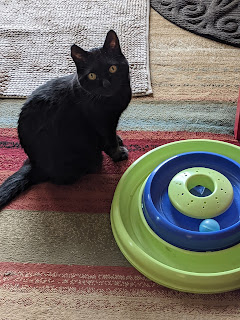 I do, though.
****
Partridges were coming regularly, but visits have dropped way down the past several days and I have no clue why. 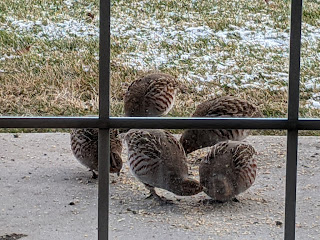 They should be here more often as it has been so cold.  Maybe because I have been gone a bit I just haven't seen them...I hope.
****
I've been working on Christmas cards the past week.  It's taking me longer than normal as I have had some really sharp back pains--kinks, I call them.  So I work a while and rest a while.  My back is the boss of me.
****
I started out trying the circular die we wanted for the fronts of the cards...but it was really hard to get it out of the die...even using waxed paper. 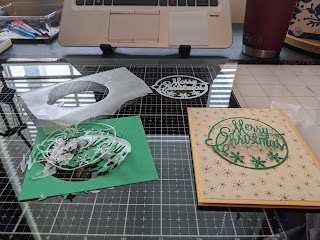 So I switched up to another Merry Christmas die that was much easier to pop out and will be easier to glue, too, because the font is wider. 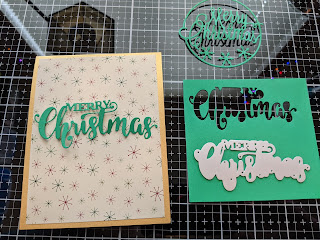 That's been my big project for this week. 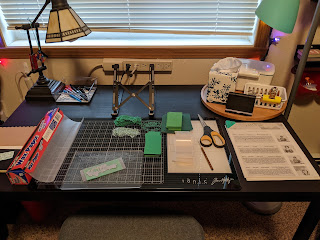 The Vagabond has been getting a good working out--LOL! 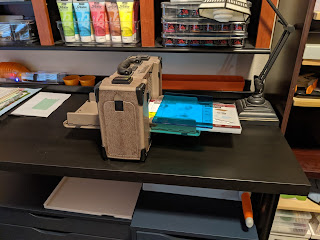 Got 80 out of 100 of them cut out so far.
****
On Thursday I went for my first bubble visit in 5 1/2 weeks!  Ian was still working on my surprise.  I took a short video.
Gramma usually uses the recliner when I am visiting.
****
Mama put a halt to the masking tape beginning platform--this was plenty--LOL! 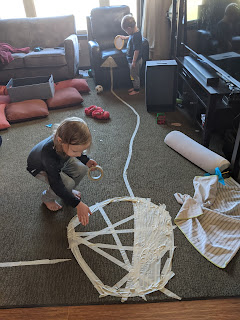 BTW--Ian bundles up all the used tape into a ball and uses it to aim at a masking tape target he made on the wall.  Always thinking of something!
****
Ian showed me his big drawing of all the characters from Guess How Much I Love You that he made! 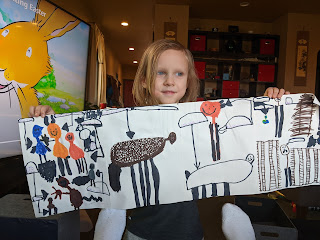 Wanted me to be sure and get the whole thing in the picture.  It's four sheets taped together to make a kind of mural. 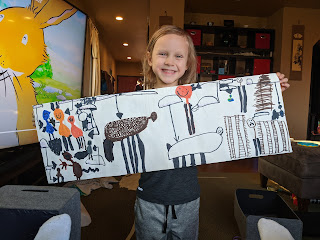 And you can see, that's exactly what we were watching--LOL! 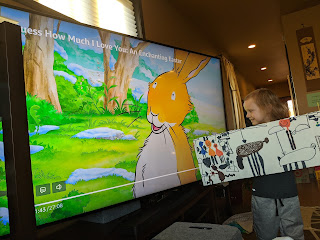 I also got to be there for a second Halloween!  Due to USPS being slow with the mail lately half the sugar free candies hadn't arrived in time so the boys got to have a second candy search in the dark with flashlights and glow sticks.  Then it was time to divide the goodies evenly.
Ian was in such a generous mood!  He gave Gramma a peanut butter cup right off the bat!  And he shared with Mama and Daddy...and even Ian got an extra goodie--LOL!
****
Annie wants me to settle down in my chair ASAP when I have been gone.  Follows me around until I do and then hops up between my legs to sleep.  Here she wondered what the heck I was doing, though, taking her picture.  She was worried I wanted to get up again--LOL! 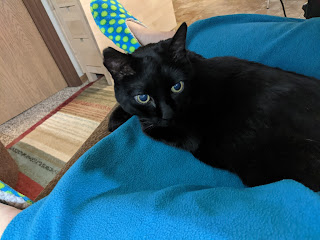 Otherwise, did the usual--laundry and cooking and such.  Back has been in a really bitchy mood lately...so instead of finishing the die cutting I sat and cut down the front papers that were bad.
****
I think I showed you how only some of the fronts I had pre-taped the backs with the double-sided tape (last year, I think) had the glue soak through to the front side.  Yuck! 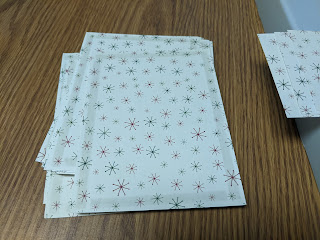 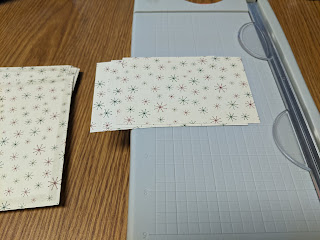 So 70 of them will look like this.  The Merry Christmas isn't glued down but other wise these are done. 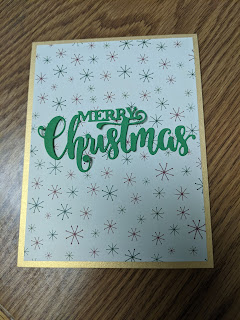 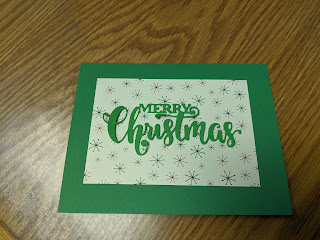 I cut down, creased, and folded the green card bases.  Still have to put double-sided tape on the back of the front background paper and tape them down...and we need to glue down the 100 die cuts on the fronts, too.  So a ways to go.
****
Luckily, Leah is planning to come over on Tuesday night for a Craft Night!!  The first in months and months!  I hope to get done enough that all we have to do is glue on the die cuts to them all.  They won't all match this year, but them's the breaks--LOL!  ;)
****
I went back for another bubble visit yesterday so I could spend time with the boys while Dagan and Leah worked on stuff.  Liam and Ian were supposed to work on making paper turkeys from their handprints, color them, and then Ian cut them out.  Liam didn't last long after the hand tracing.  He always seems to need to go find Mama, so I wasn't able to keep him out of their hair the whole time when they were working upstairs.  (Sorry, guys!)
****
But Ian worked on the turkeys, finished them, and then did a little writing on and signing his name to the cards.  They were making cards to thank Uncle Aaron and his Great Grandma and Grandpa for all quarantining for two weeks so they could come over for Thanksgiving...and plus a hope you have a good Thanksgiving card for his cousin's family since they can't come (because they can't quarantine for two weeks as they teach school).
****
Yes, I forgot to take pictures.
We were so busy.  ;)
****
This afternoon Leah is picking up Cashwise groceries--and not only some for me, but her grandparents and brother so they can stay quarantined till Thanksgiving.  She does the drive up thing where they just stick it in the trunk.  I'm meeting her at my garage because I have a couple things to bring out anyways and I try to leave the apartment as little as possible.  Two birds with one stone.  We do masks, etc.  Leah washes up well when she gets home--me, too, after I put my groceries away.  Life is just like this now.  It is routine.  :)
****
Woke up to a little more snow again.  It's 24 degrees right now (-4.4 C just asked Alexa) and supposed to get down to 16 tonight (-8.9 C). 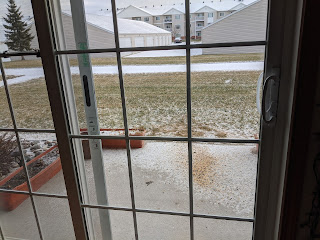 ****
Three residents and one employee have tested positive where Mom lives now.  That's the most residents there have been.  I hope they nip it in the bud again.  They've been so strict there, but the virus is running rampant everywhere.  Fingers crossed and saying a prayer.
****
Meanwhile...I shall be working on the Christmas cards and looking forward to a Craft Night with Leah tomorrow!  Stay safe everyone!  :)
****
"Life appears to me too short to be spent in nursing animosity or registering wrongs."
Charlotte Bronte
Posted by Rita at 2:25 PM