Good afternoon!
It is snowing very lightly.  For a while it switched to light rain.  I took a final picture of the three trees.  The early, heavy snowstorm did change things this year.  The center and left tree both turned at the same time for once.  Even though the right one changed first it is still clinging to the most leaves. 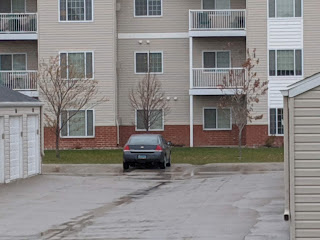 Been a quick week, for some reason.  I've still been draggy with the allergies, but they might be letting up some.  Not sneezing as much, anyways.  :)
****
Between our usual feathered guests... 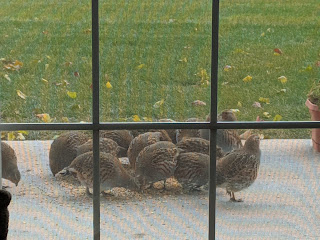 ...Caroline came to clean on Tuesday... 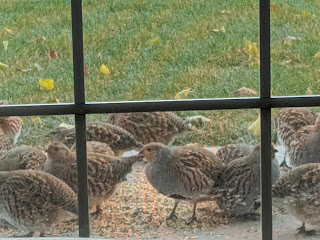 ...and was back on Friday with groceries. 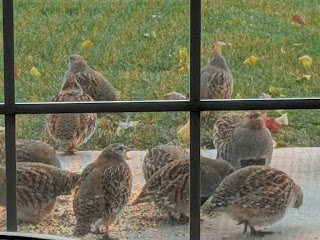 I got these closer shots one afternoon because I was in my chair and not in the kitchen.  ;)
****
Another small package came from overseas.
This set of dies you layer for a 3D effect.
Only one die left to arrive. 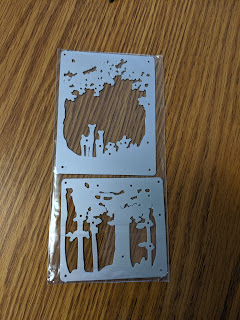 ****
On Thursday Leah picked me up after she picked Ian up from School.  I handed out the treats (Play Doh, Halloween pencils, and glow sticks) while they took the boys around. 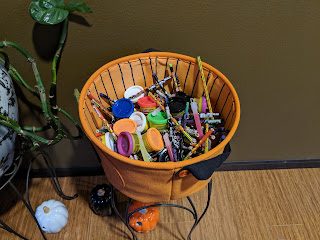 The boys just fit into their dragon costumes--without having to wear a coat over them! 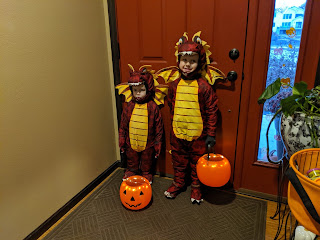 Liam had snow pants under his and Ian had two pair of pants on.  They had layers and hoodies on, too, I believe.  It was only 38 degrees (3 C).  There weren't as many kids as last year, but close, despite the weather.
****
Tired boys got to pick a candy after all that trudging through the neighborhood. 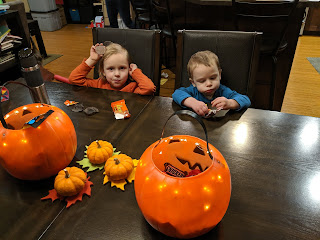 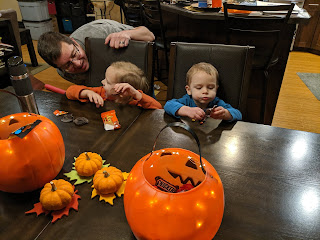 Gramma got to read Ian a story downstairs before bed (the stairs are harder for me as my hip and knees get worse).  Dagan surprised me with The Enormous Egg!!!  I should have taken a picture of the actual book, but I found this picture of the original book online (selling for $20, no less). 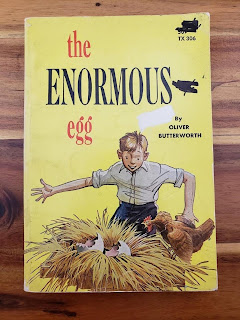 I had saved many of my books I bought in fifth grade though the school weekly reader program.  Dagan read them when he was little...and now he is reading them to Ian!  That paperback book is 60 years old!!  Yes, I was delighted to read the next chapter to Ian.  (Liam isn't interested because it's not a picture book, of course.)  Ian sounded excited about when he will be able to read books like that all by himself.  Nice!  :)
****
Since I had chicken livers with my grocery order, on Saturday I chopped up some raw for Annie instead of her usual canned food.  At first she seemed confused, but she went back and little by little she ate every last bite!  I also bought some no-grain canned food that she has had since then and she seems to really like it.  Annie doesn't usually get overly excited about her morning canned food but she sure has been the past couple of days--LOL!
****
Today I plan to make some pate cat food for her using the chicken livers, beef liver, and bone broth in the food processor.  I got some small baby food containers to put her food in.  I should leave a few of them just diced up meat like she got the first time, too, to see what she prefers.  They were out of chicken gizzards or I would be putting those in the processor, too.  I'll let you know how it goes.  Leah is planning to start Blink on some homemade foods, too.  Blink and Annie also still always have their Origin dry food.
****
Today I'm doing a load of clothes...and making raw cat food.  It's grey with occasional tiny snowflakes.  The birds have been so hungry now that the weather has changed.  I do love seeing them several times a day.
****
Was snapping some pictures... 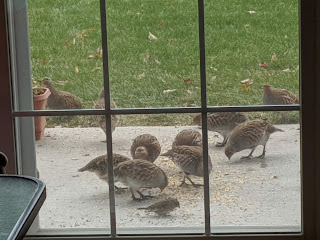 ...when I caught them go on alert. 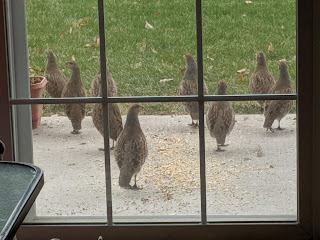 They all stand tall together...when someone is coming down the walkway or there's a loud noise or something startles them.  They either settle back into eating or they all take off in a big flurry of feathers.
****
I'll leave you this week with a few minutes at Rita's Bird Cafe.
****
Until next week!
****
"Food for the body is not enough.
There must be food for the soul."
Dorothy Day
Posted by Rita at 3:21 PM