Good afternoon.
Seems like I am always posting later in the day now.  One reason is I try to do all my catching up online in the mornings to avoid the laptop more the rest of the day because it's best for me to take the news in morning doses.  Definitely not before bedtime.  I certainly want to know what is going on, but not all day long, you know?  Plus this morning I realized I had forgotten to set up June in my bullet so I needed to do that.
****
This past weekend was like flashbacks to the 60s protests and riots.  We thought we had brought about huge changes.  Sadly, prejudice can live quite easily beneath the surface.
****
It was weird to see the riots around where I had lived in Uptown for a couple of years in the early 90s--was an assistant manager at a pet shop on Lake Street.  I actually moved away because of the violence after the Rodney King incident.  It is shocking to find out what lingers right below the surface.  Even then, after a couple of decades little had changed with the police and how they treat people of color.
****
There was a lot of unrest all over the US after Rodney King, too. The next day in the afternoon in the parking ramp next to my work I saw two black men walking and peeing on the parked cars--talking loudly about them being rich white people's cars.  I'm anything but a rich white person and pee wouldn't hurt my used car--but I just stood still and quietly waited until they were out of urine and out of the ramp--LOL!)  Seemed to me like disgusting but minor mischief.
****
The next night I had been visiting a friend and was on my way home...came off the highway 35 ramp to the stoplight.  A car with 5 or 6 young black guys pulled up to the light, but in the left hand turn lane so we had one lane empty between us.  They appeared to be quite drunk so that effected the aim--thank goodness--because they were very close to me and my window was open!  I actually felt my little car shudder as there was a loud crack and glass shattering while they shouted "white b****".  No traffic--so I ran the red light, they didn't follow, was very close to my apartment, quickly home--a bit shaken.  He put quite a dent in my car door.
****
I decided to move back to the suburbs right after that--two years in the big city was quite enough for me.  The sirens at night, the boss distrusting her workers more than the customers who were regularly shoplifting, and soooo many people crammed together they were normally a bit distant.  I thought I was very adaptable, but I needed some space.  I am not a downtown girl, I guess.  I wanted to get back to friendlier, less tense, suburban folk, to be honest.
****
Anyways, that all came back to me.  It is such a shame.  I waited on people of all colors at Uptown Pets and they were all very nice people.  I would smile and laugh with everyone.  I do hope we learn more this time.  I pray we can create real change in this country.  See each other as the people we are and not as symbols.  I got a small taste of what it feels like to be a hated symbol and not a person...and it is horrible.  No wonder so many are so angry.
****
Anyways, I spend my mornings lately catching up on the good and the bad (remember I don't have regular TV and can only get information online) and then try to keep busy with other things and watching interesting shows the rest of the day.  Stress and fibro just make for additional pain and exhaustion so I try to stay as positive as possible...on day 82 of my isolation.  :)
****
On a happier note...there's good news!  As of the 30th of May there have been no new cases of the virus at my mom's complex!!  Hurray!  She's doing okay.  Really sick of isolation, though.  No surprise.
****
I was kept very busy this week.  On Tuesday I finally hauled out all the bins of winter clothes and made a trip to the dumpster, too.  (Funny how minor tasks become bigger ones when your lower back is disintegrating--LOL!)
****
[Side Note:  There's a notice now on Blogger that there will be a "new Blogger interface" by late June.  Awk!  Now I will have to wait and see if I can find my way around on here once they change it up again.  *sigh*]
****
On Thursday I started on the patio.  Huge project for me that I haven't done alone so I am thrilled that I managed to plant all the Costco starter plants by Sunday--mostly what I had to take pictures of so bear with me--LOL!
****
My marigolds are still very much babies. 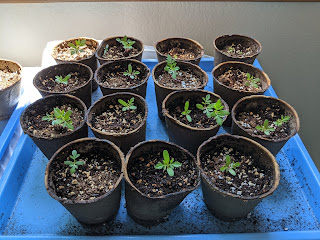 The teeny, tiny coleus seeds have barely grown at all--LOL! 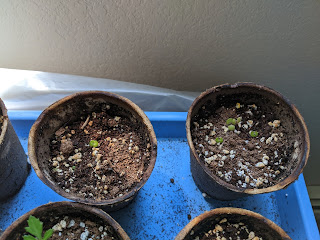 These are my largest marigolds. 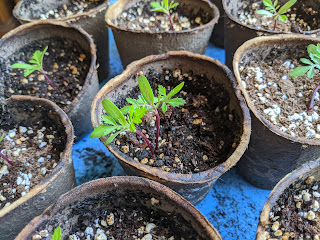 So, I haven't moved them yet, but I do have a plan.
****
Thursday I worked away and got this far.  I know--looks like nothing whatsoever--LOL! 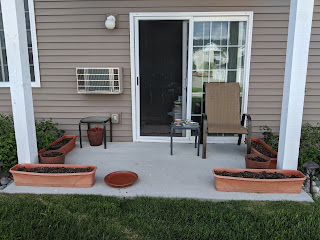 I dug, chopped, and raked to get all the root balls and old stems out of the planters and two pots.  Half a garbage bag worth. 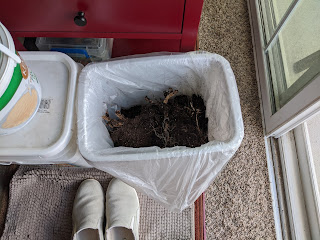 I had to do that one at a time--and go in and rest my back.  Then I took the terra cotta colored duct tape to the huge crack that ran down the side of the one planter.  Not a very good job but I got it done well enough, I guess. 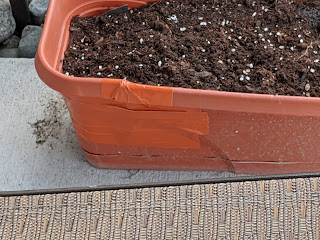 Next I raked & stirred everything up, sprinkled some fertilizer over the top of all of them...and added a thin layer of potting soil over that to keep the fertilizer from blowing away. 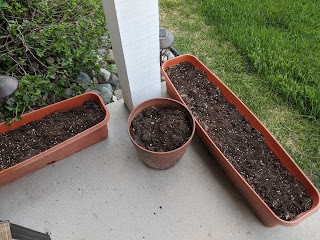 That was all she wrote.  Collapse-in-my-chair time with memory foam pillows for my back.  Leah called that night and we talked till 1:30 am!!  (I really miss her--miss them all!)
****
On Friday I needed to wash a load of clothes so I figured that would be the back-test.  It was.  No planting for me on Friday.  Was an R&R day.
***
The robins really love to bathe. 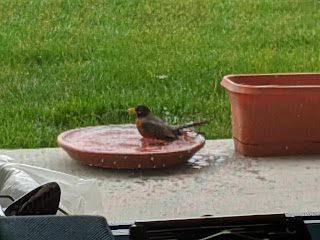 They are the most frequent visitors to the water dish. 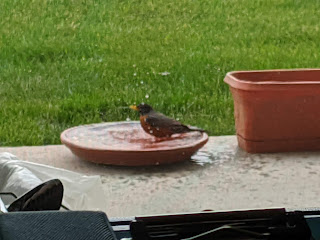 I love to watch them.  :)
****
Saturday was Gramma Day, so no planting then, either.  We had a different kind of day.  Ian was set up on one end of the big table in their gaming room upstairs and Mama was set up on the other end for sewing face masks.  They hadn't informed me that this was the plan.  I'm sure Leah figured watching Ian paint was easier than reading to him when I was so shot...but I decided it was a perfect time for me to construct Ian's book.  So I gathered up the supplies and at least got the book together while Ian painted a golden bird with a blue wing and a purple eye and Leah was trying out a pattern for a face mask using some old burgundy sheets.  Was a productive afternoon.   I got the book together--TaDa! 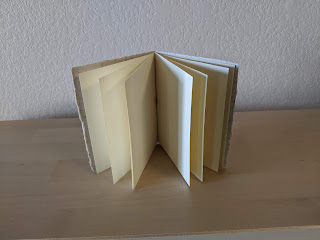 Ian picked gold embroidery thread for sewing it together as gold is his current favorite color. 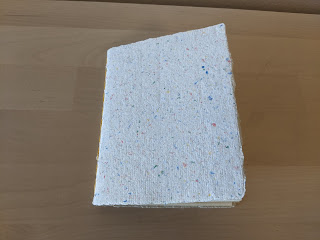 Now "all" I have to do is write the story inside.  LOL!  I will show it to you when I finally finish it.  Ian is aware that Gramma is very slow getting things done--thank goodness--LOL!
****
Yesterday was a beautiful day--just very windy. 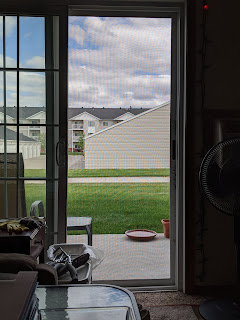 I had to work on the planters one at a time and rest in-between.  I took some pictures before I watered...because I didn't think I could manage to do any more.  The poor plants kind of went into shock--well, especially the coleus. 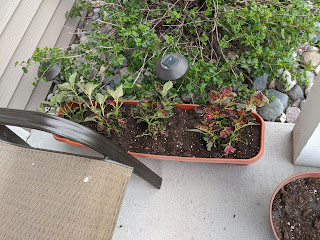 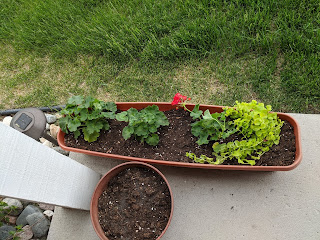 The geraniums are a bit tougher against the wind. 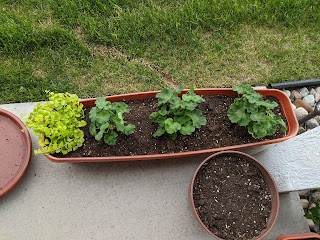 On the side planters I have four coleus in each one. 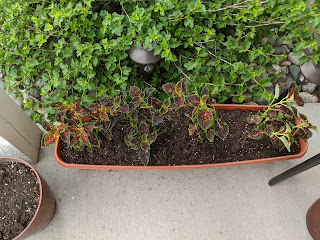 But I knew that once I sat down I would't be able to get up again...so I figured I'd give them some water while I was still able to be up and moving.  And it was a good decision.  ;)
****
This was the patio this morning. 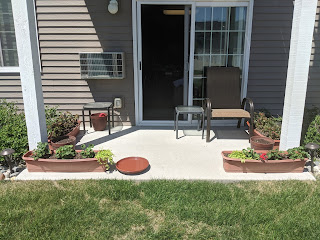 The coleus seem to have bounced back a bit now that the wind died down a little. 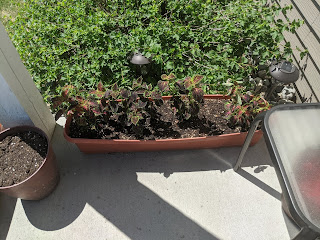 Everything was bone dry again, though. 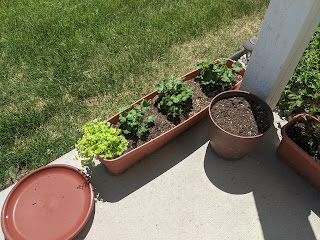 I tried to pull the goldilocks fronds over the edge again, but I have no doubt they will be blown about in the wind all the time.  Pretty, though. 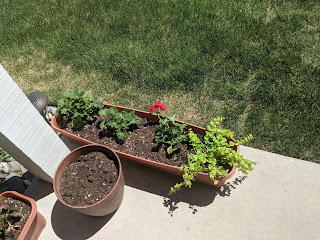 The side bushes in the landscaping are trying to take over my patio--LOL! 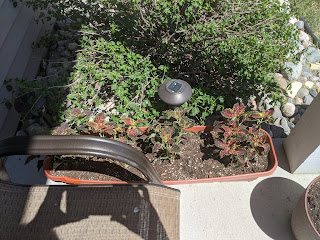 Anyways, truth be told--it is 94 degrees right now (34 C).  While I was writing to you I had to stop, go outside to water the poor flowers when they finally had shade, close the place up, and turn on the AC for the first time this year.  Whew!
****
Oh!  Oh!  On a crazy note...I heard that some of the people waiting for actual stimulus paper checks are getting prepaid debit cards in plain white envelopes from Money Network Cardholder Services!!  How stupid is that?!  People think they are some kind of advertisement for a credit card (because they have been known to send fake cards inside of those) and people have cut them up and or thrown them away!!  There's nothing on the envelope that says anything about it being from the government--good grief!!  So if you are waiting for a paper check--keep your eyes peeled for a pre-paid debit card!  How dumb is that?  Looks like junk mail!!
****
Well, that's it from here for this week.  I have to manage to try to tidy up a bit for an apartment inspection tomorrow morning.  This will be the messiest he has ever seen it having gone without my cleaning girl for almost three months.  You can write your name on a lot of my furniture, the carpet is not the cleanest, and he better not look closely at my bathroom--LOL!  I can only do so much and then only so much at a time of what I am able to do--LOL!  He knows that, though.  If I will have the same guy.  I wonder if he'll wear a mask and I should wear mine while he is here?  I would expect so--and for us to keep our distance, of course.  He doesn't usually touch anything except the smoke alarms--to set them off and terrorize Annie.  (Karma hated it even more than Annie does.)  I expect he'll be in and out in a matter of minutes.  I'll tidy up as much as I can as my back allows.
****
I am soooo happy to have the Costco flowers in the planters.  Oh, and my plan is to transfer the little marigolds into those two big round pots.  They are more used to the wind as I have been able to open the bedroom window often.  I couldn't get the leverage to open the studio window up from a stool with the wider table there now and all the plants in the way...so they are having the most extreme adjustment to our ND winds.  There's no rush to transplant the marigold babies, thank goodness.  I will need a few days to recover, anyways--maybe a week--LOL!
****
Good grief!  It is almost time for dinner.  Yup--Gramma is slow doing almost everything.  ;)  Until next week...light and love to everyone.  :) :)
****
"Be joyful, though you have considered all the facts."
Wendell Berry
Posted by Rita at 4:53 PM