Been almost three weeks since I posted so I thought I should let you know I am still alive and kickin'.  Well, alive, anyways.  Been sick over a month now.  Still blowing my nose and tired as hell, but I've never been as sick as other people I've heard about.  Mine has mostly been a sinus thing and hasn't moved into my chest, thank goodness.  More exhausting and annoying...enough that I'm not getting much of anything done beyond what I absolutely have to (or yearn to get my hands on for even a few minutes).  Haven't been online much.  Mostly watching TV shows with Annie.  Totally erratic hours, but we're fine.
****
The critters keep us company, too. 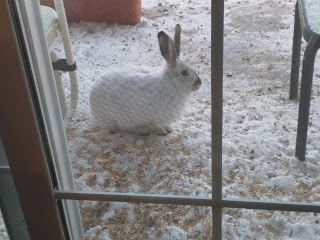 This one didn't seem bothered by my walking right up to the glass. 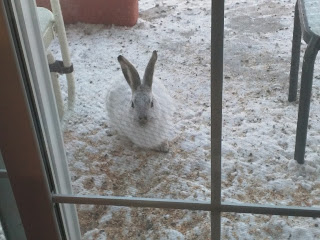 They are really elegant... 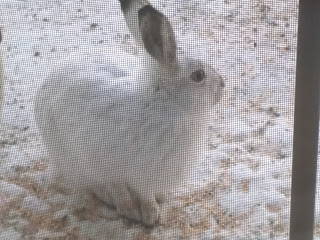 ...in their winter white. 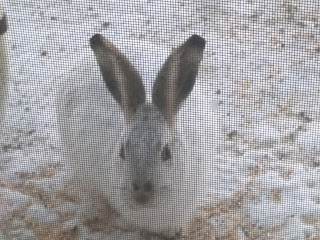 Never been this close to a prairie hare or jackrabbit... 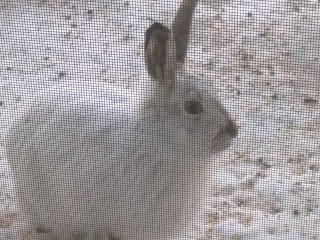 ...but Annie is--regularly.
They pay her little mind--LOL!
****
Dagan has come over about once a week to help me out with trash and getting bird seed from the garage (even using a pail so I don't run out).  He picked up kitty litter for me from the Natural Pet Store, too, on Friday Jan  26th.  They didn't have my usual brand so he called me from the store and I'm going to be trying one that says it has less dust.  Well, Annie is--LOL!  Don't mind me--been sick so long I am slaphappy silly.  ;)
****
While he was on the phone he told me there were a couple of tiger striped kittens there.  Obviously caught his eye.
****
They have talked about getting another cat (Leah wanted two) ever since I took Annie.  Dagan grew up with cats and dogs.  He learned how to be gentle with them and could play with them...and we all wanted that for Ian who loves animals...and now there's Liam, too.  They have looked but hadn't found the right fit.
****
Sunday January 28th I got a text from Dagan that they were on their way over to look at the kittens.
****
One of the sisters was being sold when they got there.  They were from a no-kill shelter in town called Cat's Cradle and were about 4 months old.  (Cat's Cradle was the place I had thought I would go if I ever got another cat.  It's even got rooms where the cats who get along stay together--no cages.)
****
The sisters were named after X-Men characters (seems appropriate--lol!) and Blink got along great with Ian.  So Blink is now the newest member of the McFamily household!! 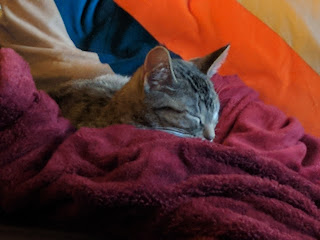 Okay--now I have to upload the short videos of Ian and Blink.  Leah sent me a variety of pictures and some short videos but I have had zero energy to do anything but peek at them all.  Be back...
****
These are all really short (19-53 seconds).
Blink arrives at her new home.
Ian carrying Blink for the first time.  He wanted to move her to the couch so Mama explained how to carefully pick her up.
Ian practicing petting the right direction--lol!  Blink is pretty easy going about little boys, it seems.  ;)
Ian and Blink.  Looks like there's potential for them to be best buds.
I have a few other pictures to share from McFamily when I feel better.  :)
****
Note: in this blog--these are all the pictures I had for you in almost three weeks--no lie!  So you know I have not been moving much--LOL!
****
I did slowly work on the bullet journal. 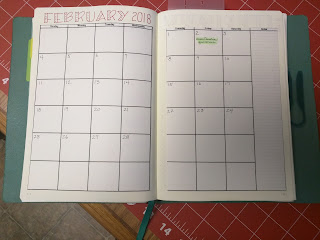 Got it all set up for February. 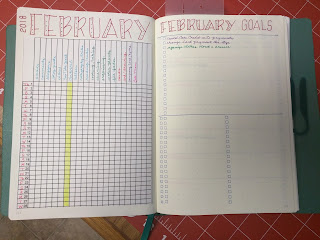 My way of bulleting is super simple. 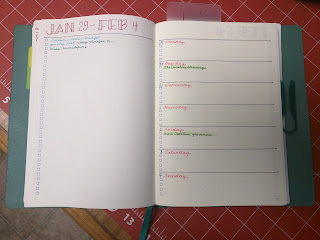 Been working for me for over a year now. 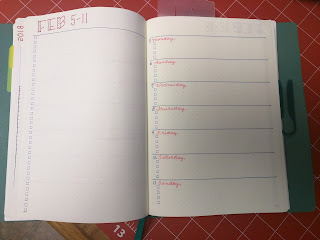 I've slowly, slowly been working at setting up the skeletal foundations for the rest of this journal--through October... 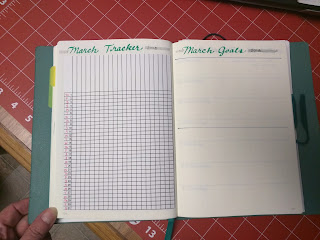 ...and even have a new Leuchtturm journal I will be setting up the basics into 2019!  Now that I have my new cover that holds the inserts I can use for all the "collections" (lists of stuff) my actual bullet will just be for monthly and weekly spreads.  Cool! 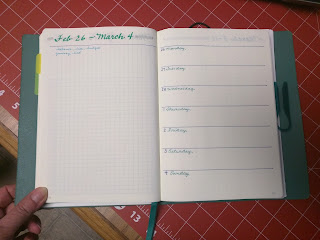 Some months (like being sick almost all of January) look more sparse. 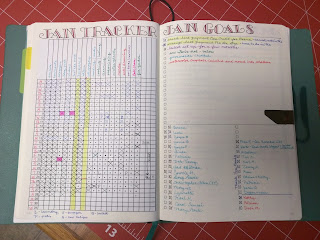 But I can fill in blank spots with drawings, washi tape, doodles, whatever if I want to--or just leave it.  Who cares?  I am more concerned about having enough room if I need it and not worried about a bit too much.  My days and weeks (and sometimes months) can vary wildly as to what I am able to accomplish so I need to have an adaptable form for me.  :)
****
The big purchase this month--been thinking about since the distress oxides came out about two years ago--the first set of colors they came out with--and re-inkers. 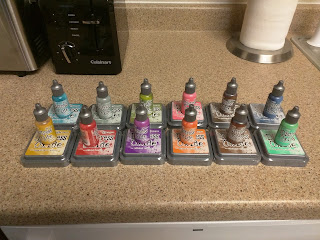 Too bad both Leah and I are not yet up to snuff because we both want to play with them.  You know I haven't been feeling great if I haven't even made it over to see the boys and meet Blink.
****
I get done what I need to: laundry and cooking.  Made up some pesto pasta and a big vat of soup--yummy! 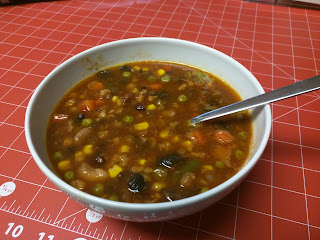 Caroline came with groceries.  This last Tuesday a new lady came (pulled out of retirement to help out while they train in new people) to do my at home review for keeping Caroline for cleaning and groceries.  (BTW--I did warn them both I've been sick with a bouncing low temp for a month, but they decided to come regardless.)  While the lady was here--I spotted an eagle on the apartment rooftop across the way!!  AN EAGLE!!  It was eating something I couldn't see from this side with its back to us.
****
No, I didn't get a picture.  I have terrible zoom anyways, but by the time I got over the shock and we had quit ooing and awing...the eagle was done and flew away.  (It looked like a couple of sassy crows were waiting for it to finish--LOL!)  They are huge!  It was totally awesome!!
****
[And BTW--this lady said she really had such a good time and enjoyed meeting me.  Commented on how upbeat I was despite being housebound, in chronic pain, and having been sick for a month.  So there, Mary from senior companions--ROFL!!]
****
Anyways, my guess is a rabbit would have been the eagle's first choice, but a grouse might have been a mouthful.  I wouldn't know anymore if one of the girls was gone.  When Dagan was here a couple weeks ago there were grouse all over the place out there!  We counted 16 of them!!  And since then they have shown up on my patio in various groups sizes: 2, 5, 6, 7, 9, and 10!!  I'm glad I don't know for sure what the eagle caught.  ;)
****
Then a couple days later it looked pretty much like this out there--grouse and a big flock of little birds--when wham!! 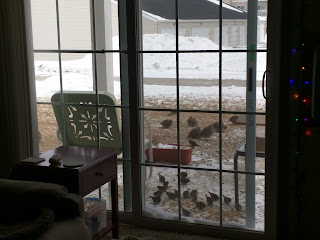 Birds were hitting the glass and small wings flapping everywhere!  A very small hawk-like bird had dove in to try to catch a sparrow or junco.  Missed.  I watched it fly away empty-clawed.
****
But the funniest part was the grouse just stood there wide-eyed and watched the whole frantic event!  That predator was way to small to be a threat to them, I guess.  But after a few minutes of them gazing about in disbelief they decided it might be best for them to disappear also--hehe!  Another reason I doubted they had seen any recent eagle activity.  At least not that particular covey, anyways.
****
This day there were nine grouse. 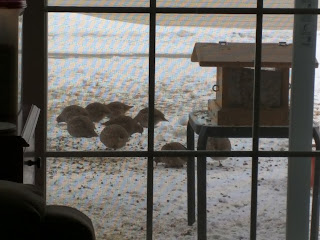 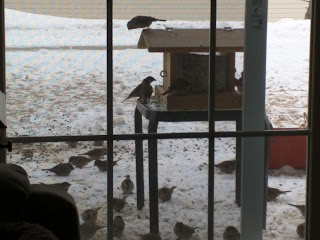 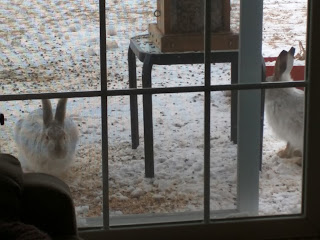 So it's not that common for me to see more than one out there at a time grazing away at the seed on the ground. 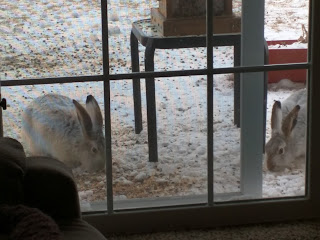 I sure hope all that rabbit poop out there will help fertilize the grass come spring!
****
Anyways, too tired to even search out a quote today, folks.  Hope to be in better shape by the time I post next time.  And here I had planned to post more often in 2018--LOL!  Best laid plans, right?
****
There are six girls out there pecking away at the moment surrounded by sparrows.  Annie retreated to the bedroom due to a random attack of violent sneezes that hit me a while ago.  Once again, another pajama day with my box of Puffs tissues.  So many people need prayers for accidents or illnesses.  Send them their way.  Me--I'm really doing fine.  For me--just waiting it out--patience...patience.  And I am lucky I only have Annie to take care of and am not disturbing anyone by being up till dawn or sleeping half the day away.  My cats have always been very adaptable about sleep and routines.  And Netflix is available day and night--hehe!
Till next time.  :) :)
Posted by Rita at 2:20 PM 28 comments: