Good morning!
Got a few things done last week--whoohoo!  I am slowly regaining control of my home.  At least the surface areas that have all become dumping grounds along the way since my diagnosis in June.  First I got my kitchen counters back and was able to maintain them at my normal level of clean.  Then it was my kitchen table.  Been able to maintain control of it, too.  Last week it was my desk.
Tuesday
First I had to purge my file cabinet (down on the right hand side) because I had no more room to squeeze any more paperwork down there.  This is the before picture.  These were the stacks that had been growing for the last six months. 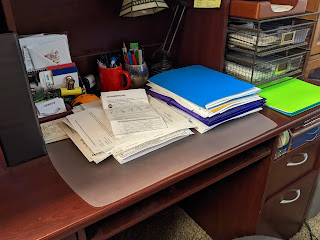 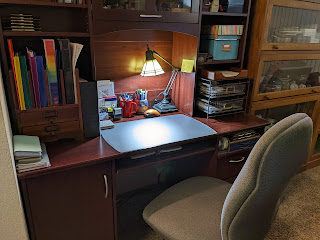 I have a lot of papers to shred.  I had everything from since I moved here in 2015.  I know--I don't need to save every electric bill, etc--LOL! 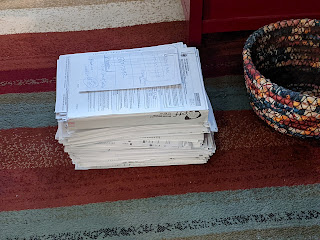 Leah said she has boxes of papers from back when her mom died that need to be shredded so she'll just add mine to it because she found a company that will shred them for you.  That's marvelous!  I have them packed up and ready to go! 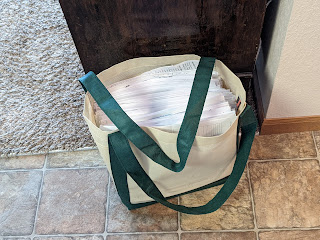 Don't even have to worry about staples or paper clips!  Nice!  Would have taken me hours and hours.
Wednesday
Leah and her brother, Aaron, made the Costco grocery trip.  First time in I can't remember how long that I was able to bring the cart out to the parking lot for my drop off groceries.  :)  I did laundry and ordered my free at-home covid tests from the government.
Thursday
Leah came over in the evening.  She changed the batteries in my smoke alarms for me, brought out trash, watered my plants...the things I still have trouble with.  We had a good gab session.  I never know where the topics will end up--LOL!  I told her a story I don't think I've even told Dagan about how senior year some kids planted marijuana seeds in the empty lot right behind the police station.  My boyfriend, Alan, took me over there to see it.  Was a good sized patch that had grown way above my 5' 1" head.  Was hysterically funny to Alan and all his friends who smoked grass that it was growing wildly right behind the police station.  They finally discovered it, cut it down, put it in a big pile and burned it.  Alan told me he and his friends gathered around the empty lot making a big point of sniffing the air while the cops were watching.
They had been sampling it, of course, over the summer and he said it was really crap grass--LOL!  So none of them cared that they burned it.  In the Fridley paper the police valued it some ridiculous amount of money--hundreds of thousands of dollars--but, in reality, they couldn't give it away.  People would ask--this isn't the stuff from behind the police station, is it?
BTW--I did try grass later on after I graduated high school but at that time I was still quite the odd but clean-cut honor student.  Alan's so-called "druggie" friends called me Sunshine and apologized when they swore.  Were like big brothers to me.
I digress...
Friday--well, all week long... 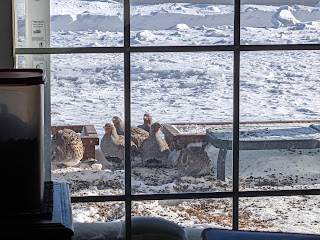 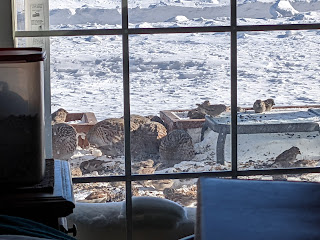 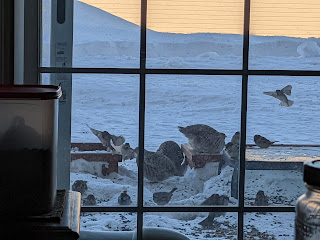 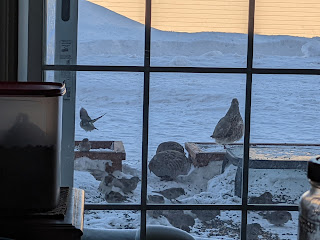 But often this is what I actually see. 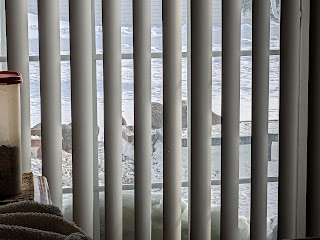 I usually keep the blinds partially open.  I don't want the critters to actually get used to me--a human--as a good thing, you know?  For their own safety.  If I keep the blinds partially open like that they can't see me as well when I am getting up and down inside the apartment so I don't scare them away as easily.
Since Friday the nighttime visitors have been coming earlier. 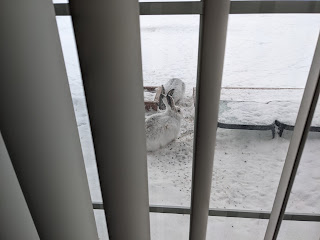 They're a little braver than the birds so I walked very slowly over and twisted the blinds open farther so I could get some pictures. 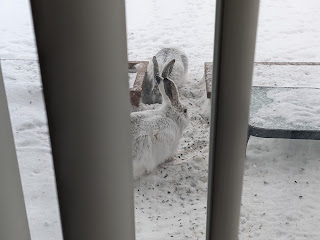 I even took a video--I'll try to add below. 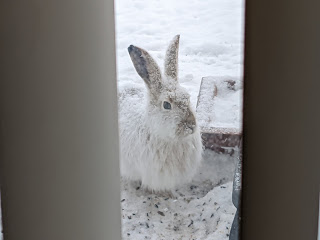 But I must apologize that I still keep calling them jackrabbits.  I grew up hearing that but they are actually arctic hares.
I'll try to put the video of the hares and partridges below.  If you don't want to hear me gabbing and giggling the whole time feel free to turn the sound off--LOL!
Well, I can't figure out how to embed anymore since Blogger changed things.  I've tried Blogger's direct way and the old way I used to do it--no luck.  So I will just put a link.  Let me know if it works please.
arctic hare video
https://www.youtube.com/watch?v=phGLHkjWuv0
I don't think it worked so I tried a direct link too.  Now it won't let me update.  ???
Grrrr!
Anyways, the arctic hares are really huge... 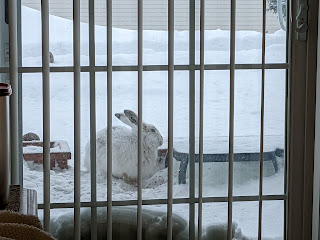 ...compared to the cottontail rabbits. 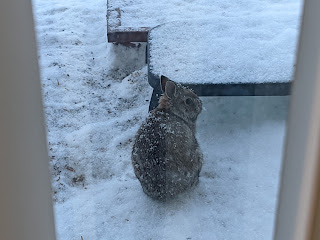 One cottontail stopped by after the hares were gone. 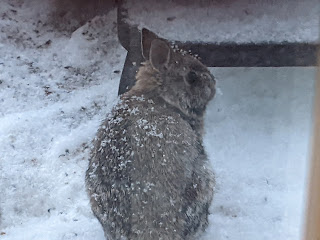 Saturday
Why would this countertop make me so happy? 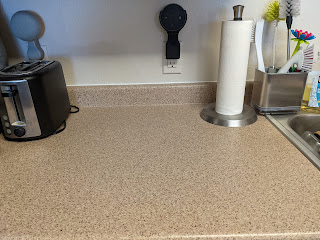 [And--yes--I have an Alexa and a Hey Google--both from McFamily.  I use them both and still wonder if they get jealous when I use the other one--LOL!)
Anyways, I had all kinds of fountain pen supplies for cleaning and filling trays on that counter for some time.  Well, I finally finished FP tray #5! 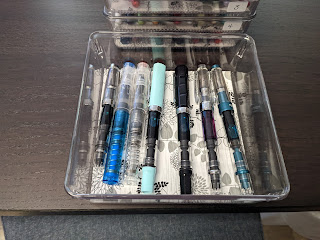 Now I am finally back to cleaning and refilling as needed as I make my way through the rotation.   Ahhh! 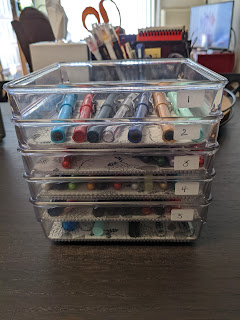 I still have the bedroom, pantry, and studio to reclaim.  Here are the studio "before" pictures. 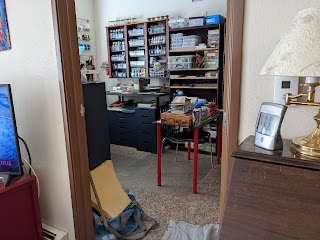 Sadly, I have already been in here working a little bit on clearing off this table... 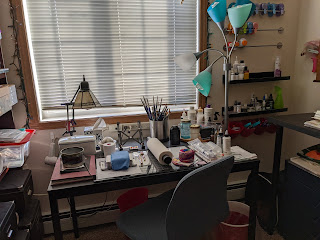 ...and this die cut machine table, too, but they still are this messy.  So much for being organized, eh?  LOL! 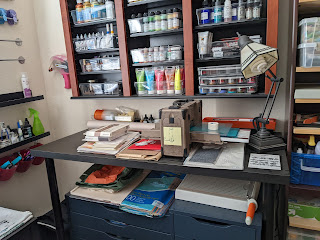 Pretty obvious I haven't gotten near the little red-legged table.  Quite the dumping ground. 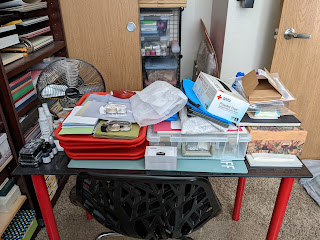 I don't even care if the bookcases and all the rest are organized or not in there.  I just need the three tables cleared off enough so that I can PLAY in here again.  ;)  Leah helped me get most of my gessoes and gel mediums in one box for the first seven Wanderlust classes so that is at least one step closer.
Anyways, my infusion got switched to this Thursday instead of Friday.  Covid has really been bad up here recently so we plan for Leah to just drop me off and pick me up--and we will keep our masks on in the car.  I want to reduce her exposure--for the boys, you know?  We're back to isolation and quarantining when we have exposure, like before.  Not that we got far from that ever.
The hospitals are near capacity.  Schools don't have enough staff to stay open in places.  We have more cases now than we have had since the beginning of the pandemic.  So, until next time--please stay safe and well!  :)
Posted by Rita at 1:42 PM 16 comments: