Good Morning!
I'll be going over to Dagan and Leah's later.  Took this picture Wednesday when I was there.  Baby seems to be a bit lower.  Any time now.  :) 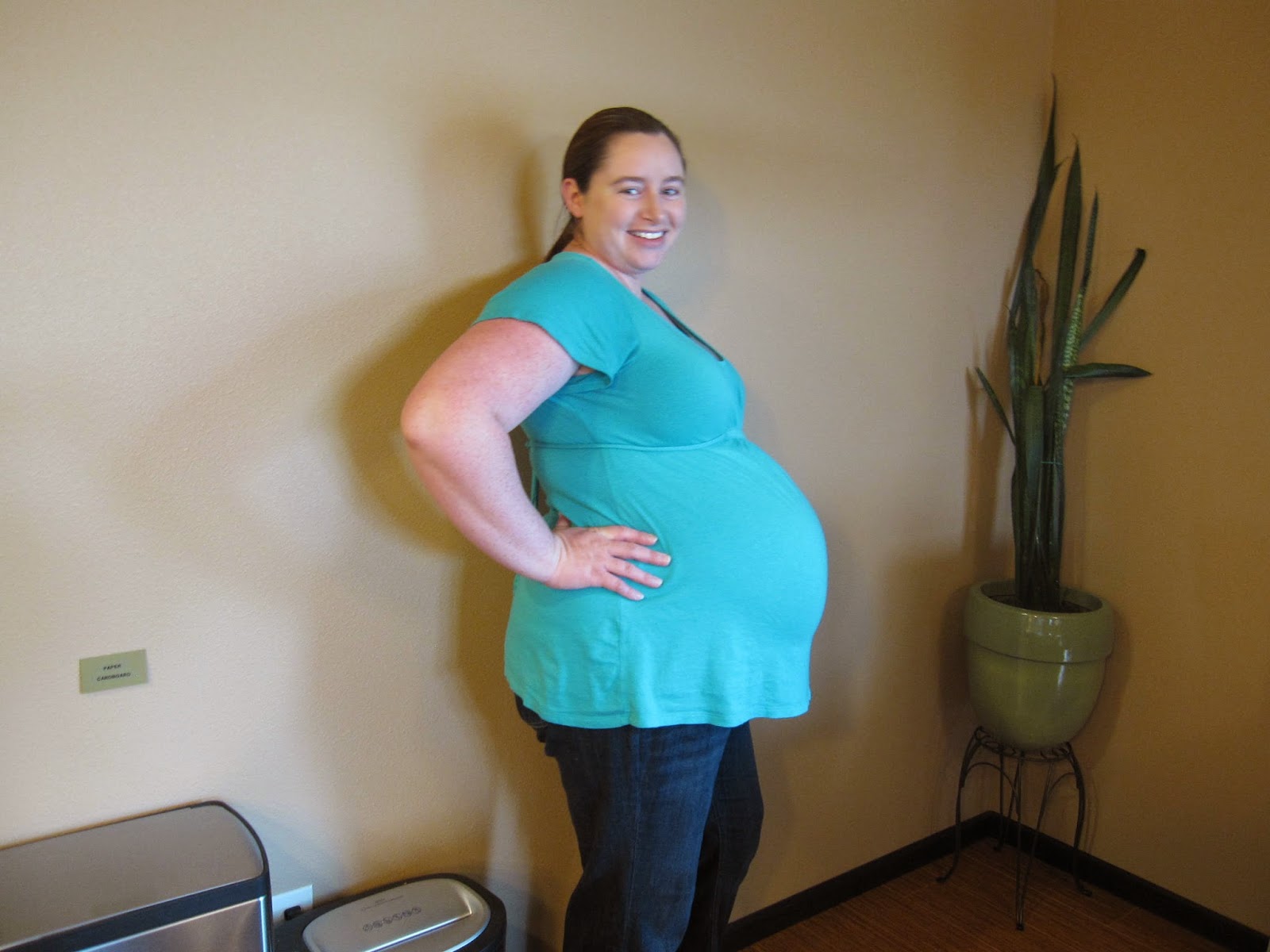 Leah and I tackled the toys last time.  Leah ran a bunch through the dishwasher and I washed these by hand.  Some new, some from sister & friend, and some from garage sales. I told them I never remember to take pictures...ran around taking shots of baby stuff as proof I left the apartment--LOL!  Like the new stroller... 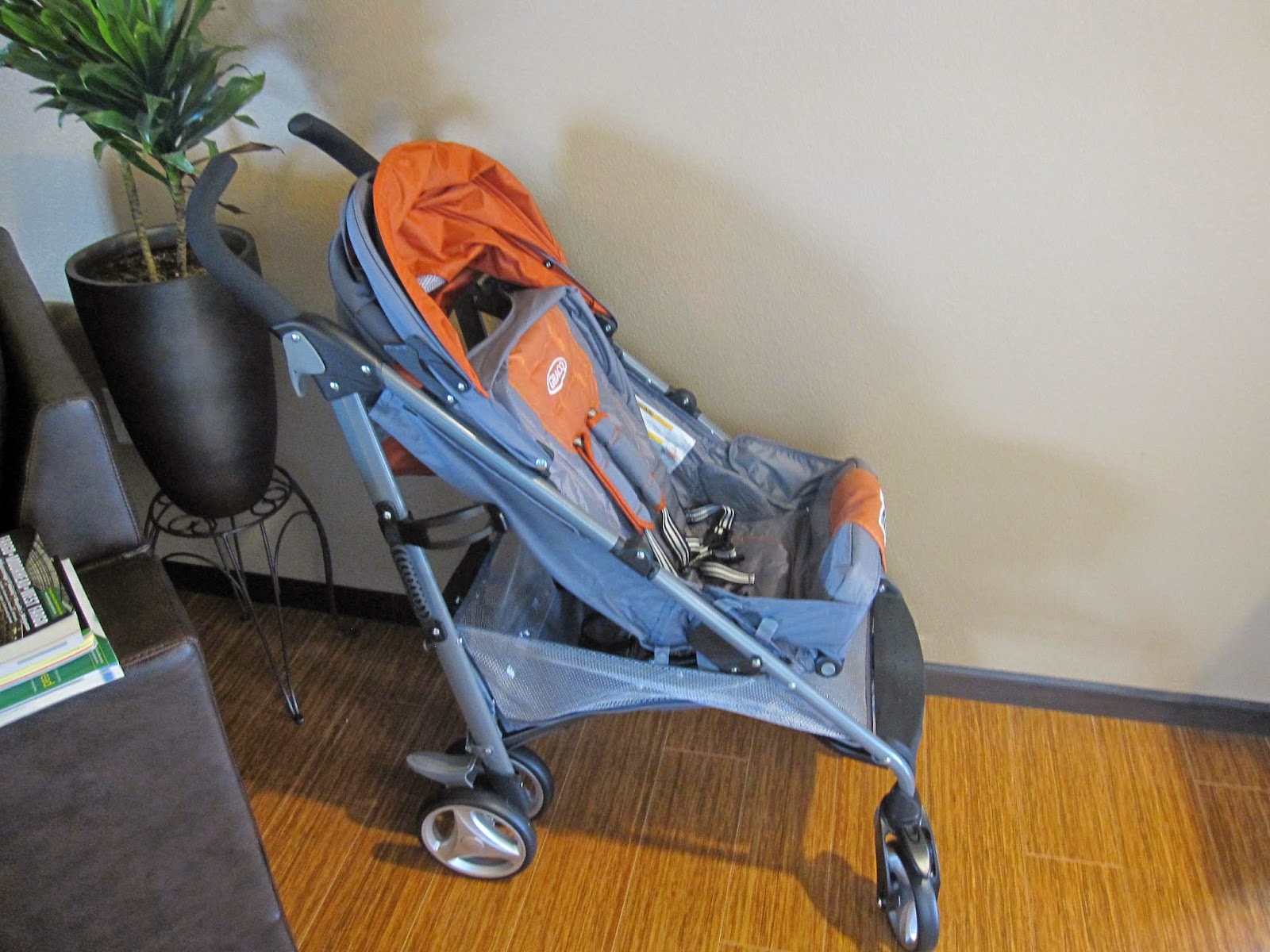 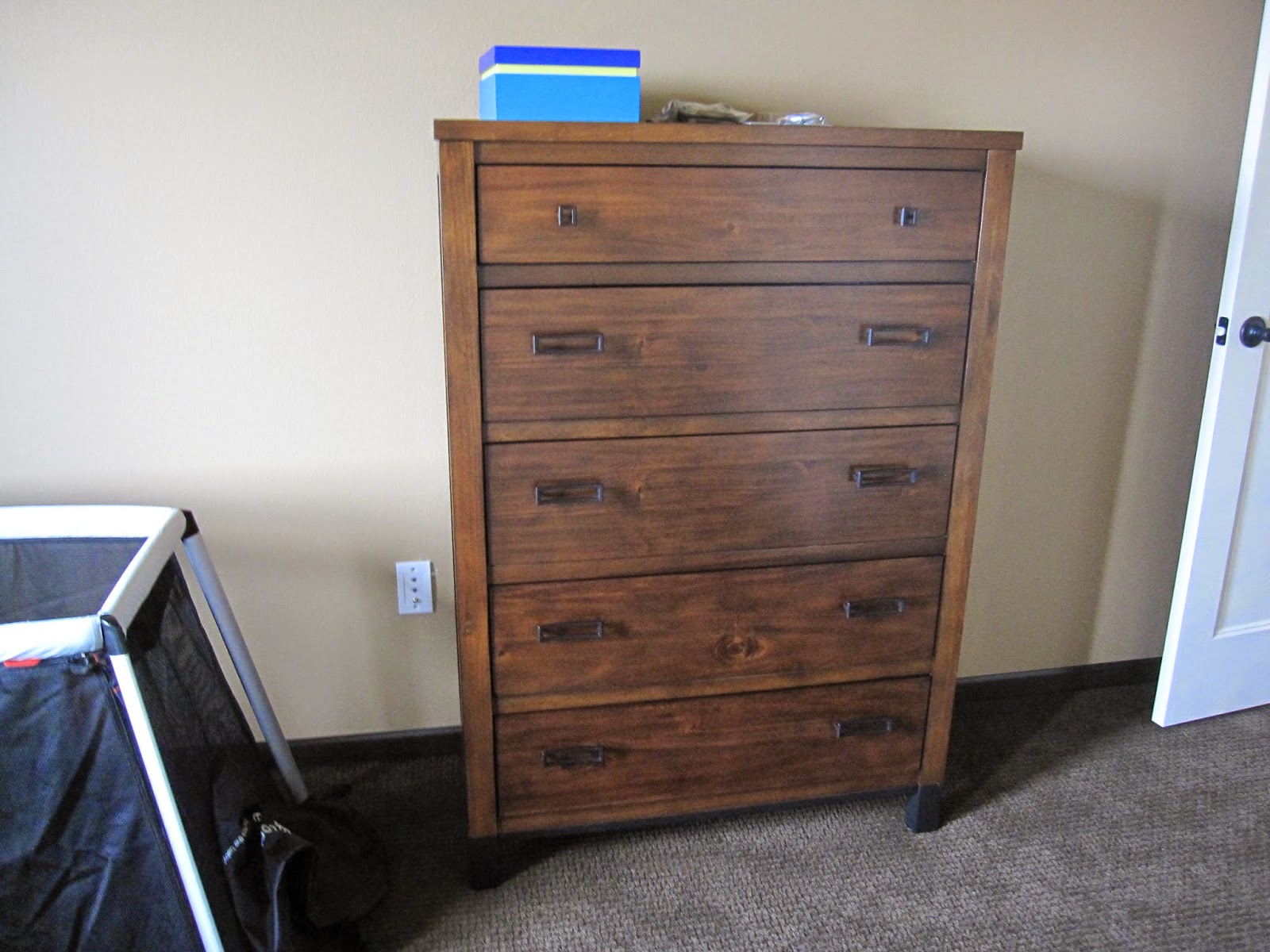 ...and playpen (but it's not called a playpen) in his room. 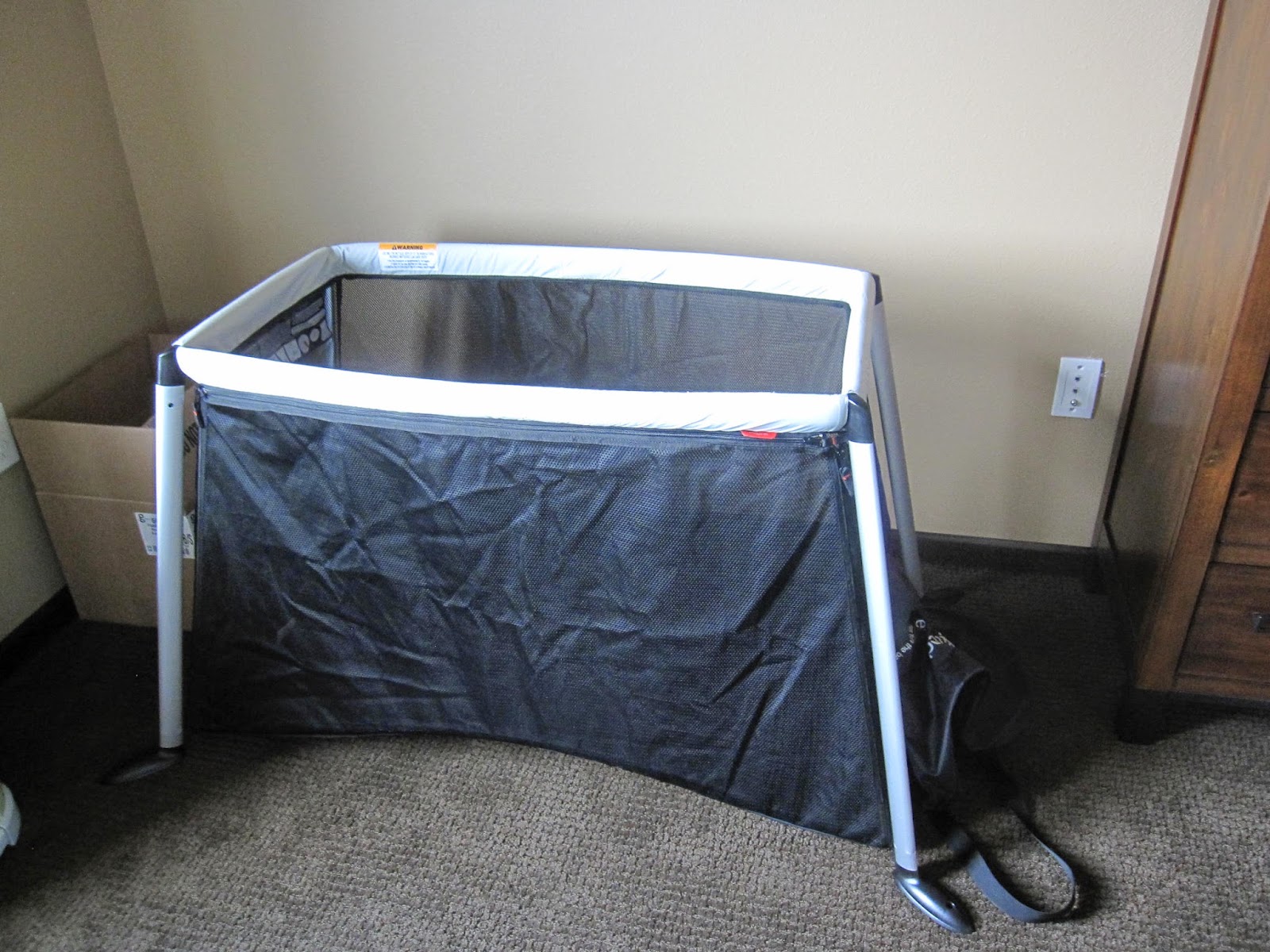 The crib is set up temporarily in their bedroom (darker in there because they have black out shades/curtains). 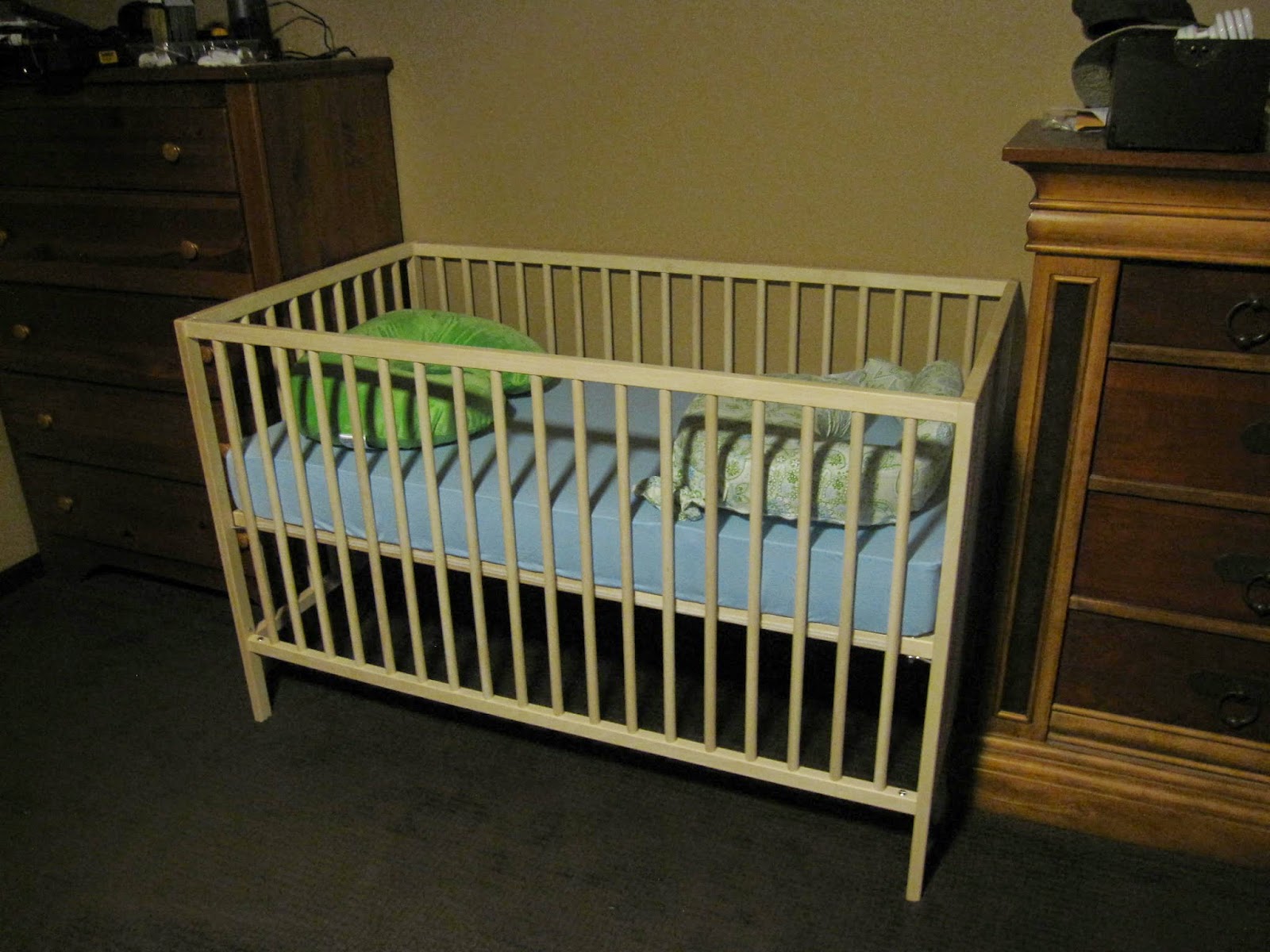 Sammy was lounging up on their bed.  Annie was up there, too, but ran away.  (She's always been quite the timid, shy one.) 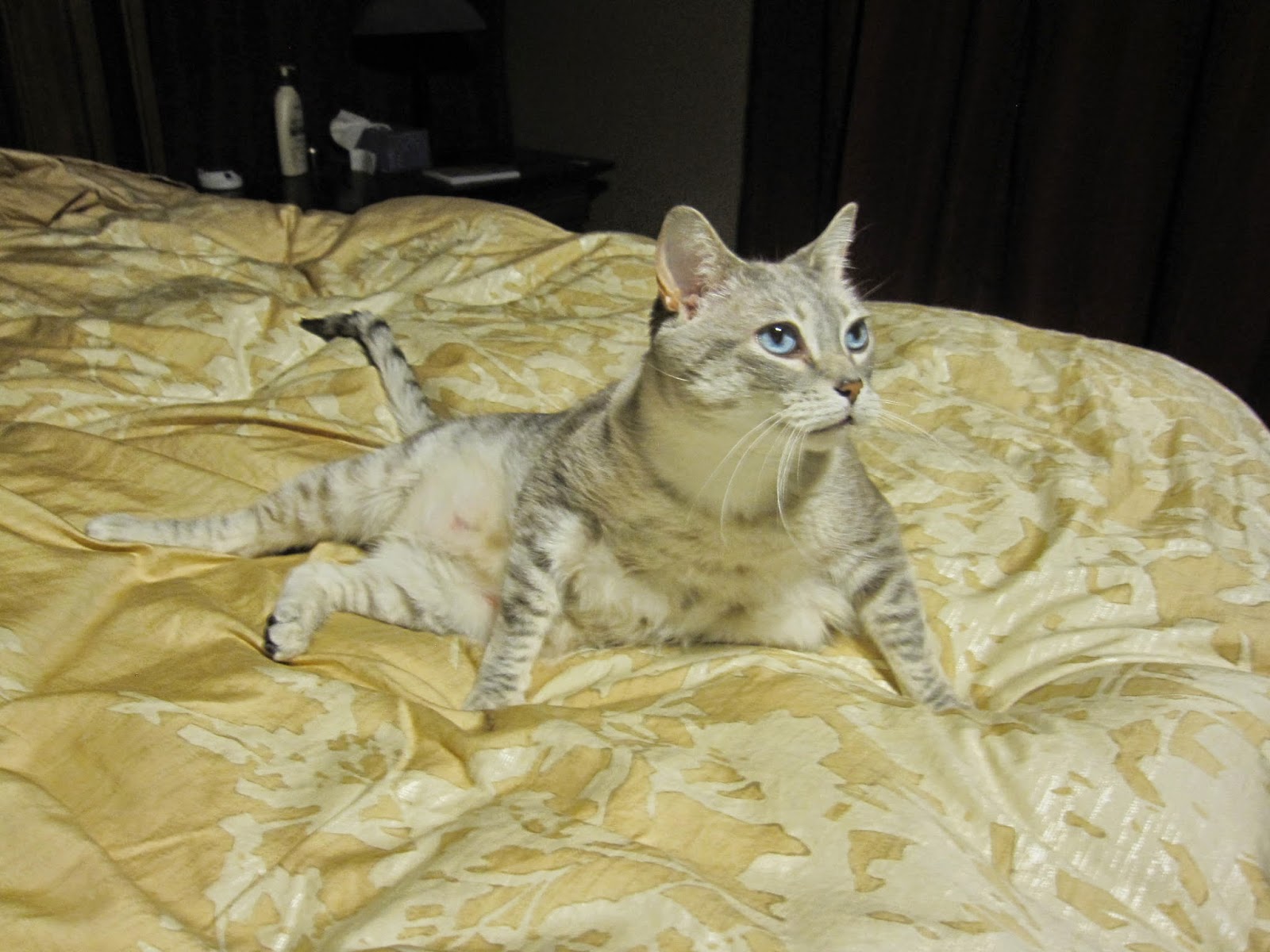 Things are pretty much ready for McBaby.  :) :)
****
Oh, I shouldn't have spoken too soon about Miss Karma being okay with me being gone regularly--LOL!  We have had barfing issues a couple different days.
****
For example--here I was sneaking a picture of her almost snoozing next to me while I was journaling in the morning.  She just looks cranky, doesn't she? 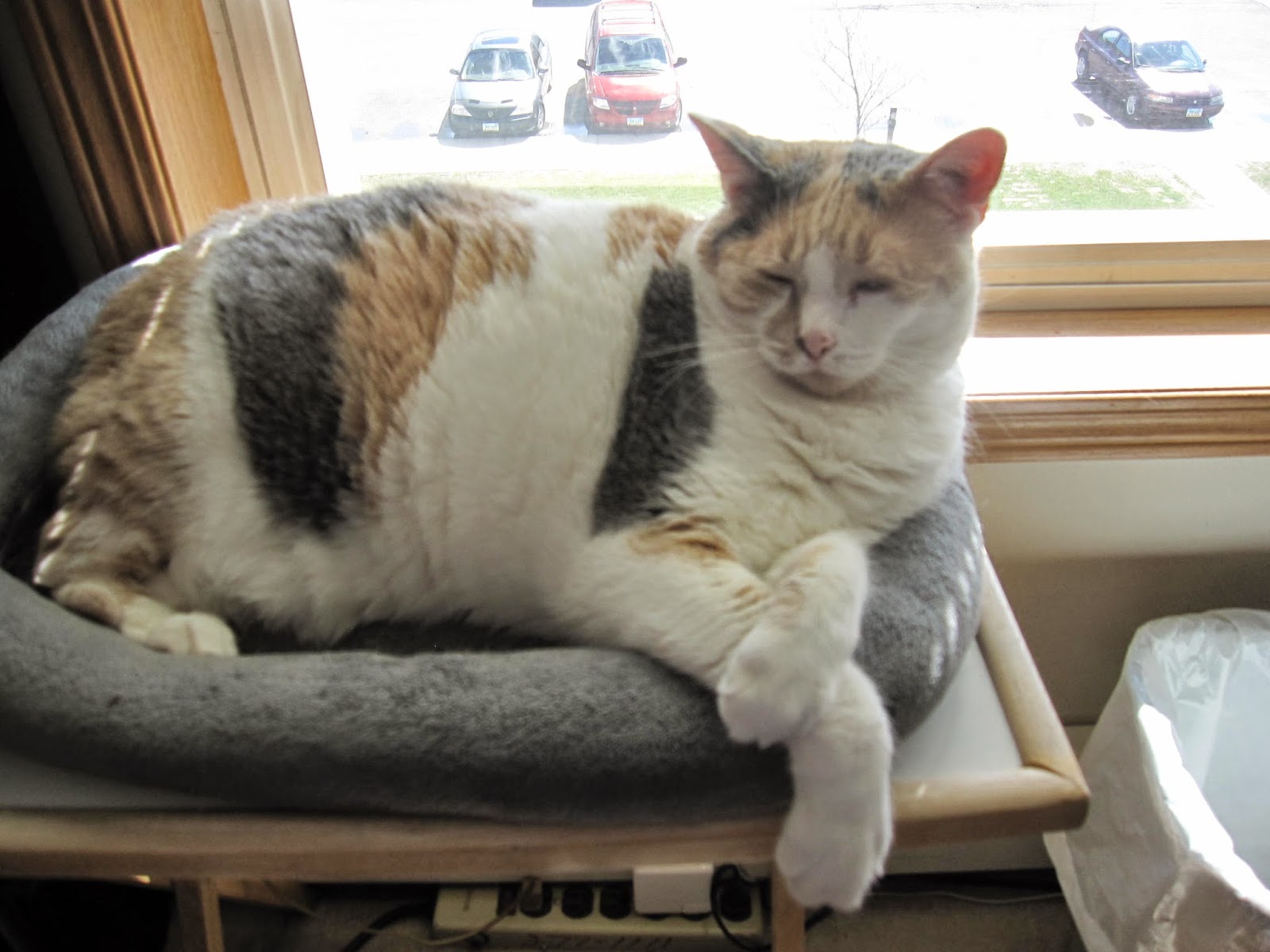 Then she noticed I wasn't writing (ignoring her). 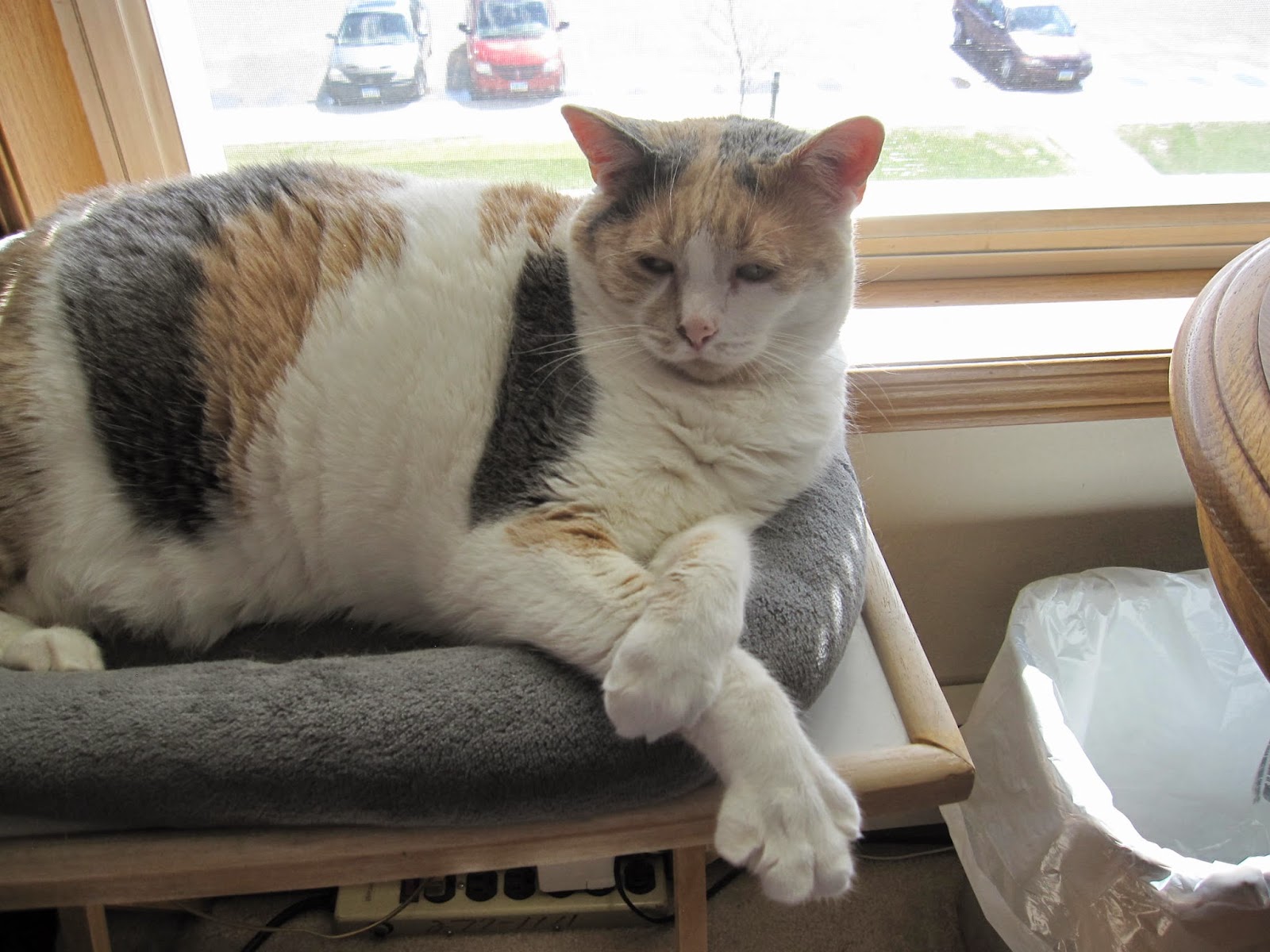 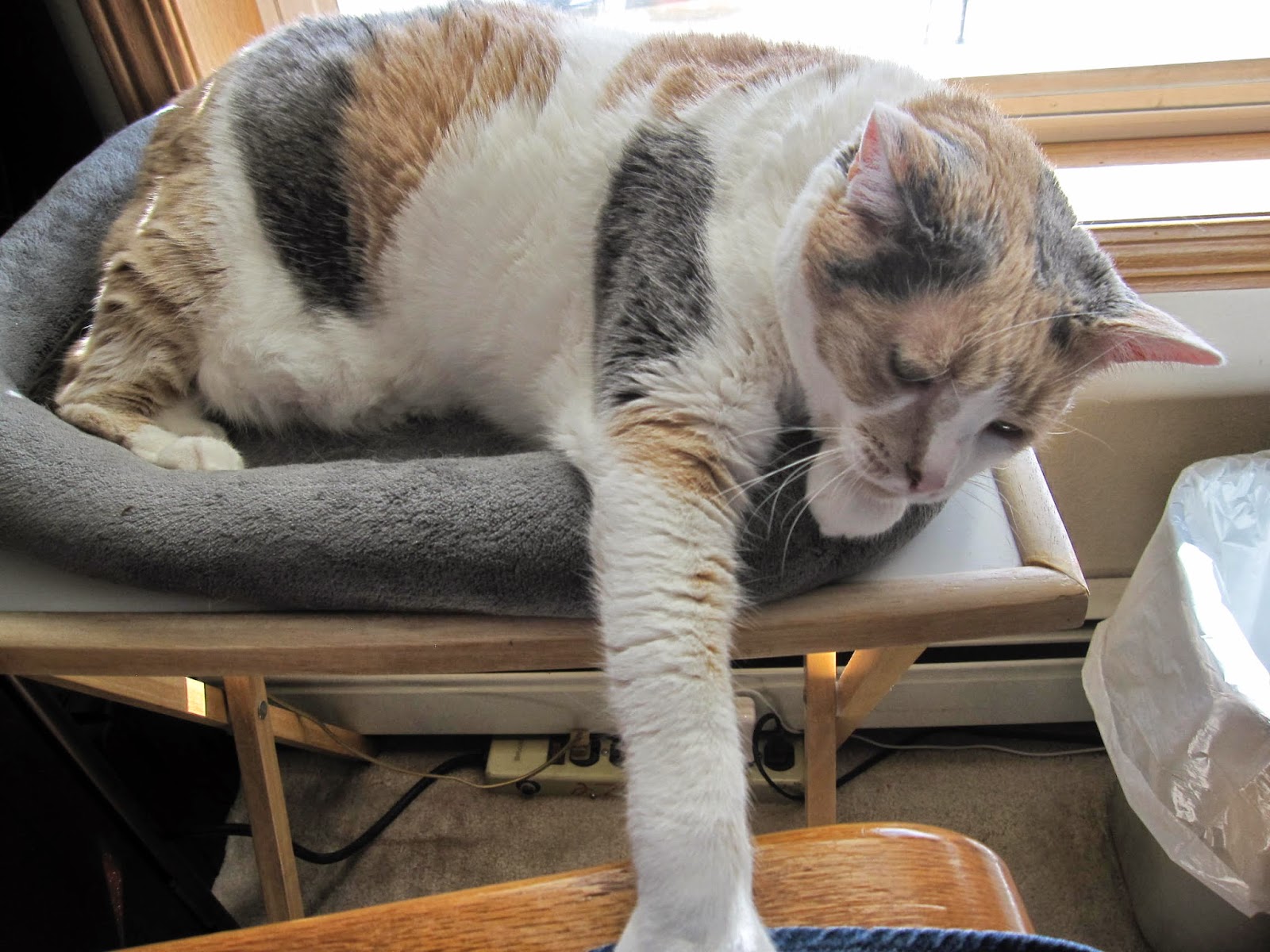 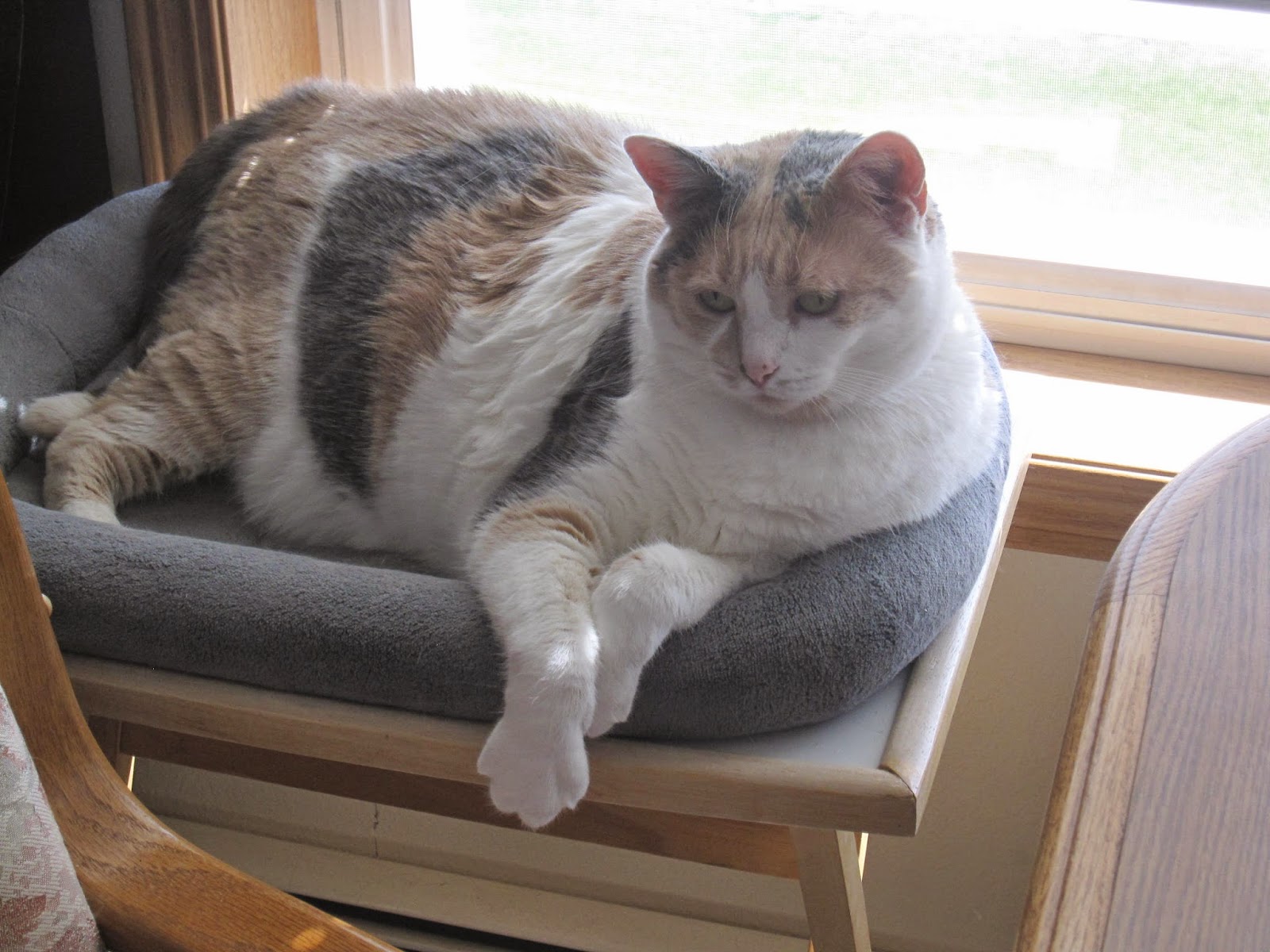 Yup!  Things are already changing up here for everybody--LOL!
****
I seem to be doing okay scooting over on M-W-F so far.  I am more sore and tired--fully expected, of course--but SO worth it.  :)  I'm still having computer issues, but I think it might be related more to my internet service (Century Link-sigh) and losing connection.  I'll have to call them next week.  Blogger has been a royal pain lately--and not just to me--LOL!  The days are just zipping along.  Been warmer--around 80-ish--and still raining regularly.  I don't think I want to watch that new movie Noah any time soon--LOL!  You will definitely get a post right away as soon as McBaby arrives, that's for sure!  Meanwhile, I have to slowly pack up for the scoot over today.  I think we might be cooking up meals to freeze, but I never know until I get there.  Whatever she wants me to do.  :)
****
Well, have an industrious, satisfying day--rain or shine.  I'll be back probably on Tuesday.  :) :)
****
"For after all, the best thing one can do when it is raining is to let it rain."
Henry Wadsworth Longfellow
Posted by Rita at 9:40 AM

Dagan and Leah are sure ready for that sweet little one. Any day now...Have a good weekend. Regards to Karma. Hope her tummy troubles are clearing up.

Hi, dear Rita! I love that Longfellow quote. It's very wise indeed. I can't wait to see the first images of McBaby! I wish I could be there to give Karma all the attention she craves. I've been petless close to a year now and miss petting, scratching and massaging an appreciative animal.

I gave you a blog award in my new post today, dear friend. If you don't have time to deal with the award rules, the list of questions etc. then please just accept it as a token of friendship and support. I hope to see you there, dear Rita!

i had terrible connectivity issues with google, blogger and gmail yesterday and this morning. i could access other sites like msn or wordpress blogs without issue, but anything google crapped out. hoping it is better and less cranky, now.

Came by to check for baby news. I see we are still waiting. Everything is ready, you've all got it organized.

Good luck any time now, oh such joy ahead. Karma is beautiful love the paws crossed Yoda does that too. Paw pats and hugs

Looks like McBaby is nearly ready to meet the world, and Leah looks like she is ready to get it over.

Annie sounds like Bleubeard, who simply refuses to allow me to take his photo. The older he gets, the worse he gets. I want a Karma, one who will allow me to photograph him/her. Well, actually, I'm one who only likes male cats, so I guess I'd want a him.

Leah and Dagan sure have accumulated lots of toys. They can put about half of them away and give them to McBaby at Christmas (grin).

Have a great weekend. It's hot, hot, hot, and muggy south of you in my neck of the woods.

Lots of wonderful toys and things for the new baby. I know you all are eagerly awaiting the new arrival.

It's not just Century Link, because Blogger has been acting up on me for days, losing my comments, or duplicating them. I'm sure they are aware of the headaches we have been having over it all. Leah does look ready to pop any minute now! I can't wait to hear how it all turns out. :-)

Good luck and maybe next time you post McBaby will have arrived! :D

I can feel your excitement for baby's pending arrival. I'm quite excited myself!

Baby stuff is certainly worth all the aches and pains. I'm babysitting Mikayla and Maddy again today...so looking forward to having them here. :)

Is the playpen actually a travel cot?

A lovely photo of Annie!

Poor Miss Karma...I feel her pain. She's missing her Mum big-time but I'm sure she will adapt as your absence becomes more regular.

Love and hugs to all ~ xo

Leah looks like she is more than ready for the baby to get here :) Adorable shots of Miss Karma. Have a good weekend and take of yourself.

You are the best mother-in-law in the entire world, but you shouldn't neglect poor little Karma. If the playpen isn't called a playpen, then what is it?

I am sure Karma knows you are visiting those other kittys:)

Leah is looking ready to go. I hope all goes well with the birth. :)

Playpen = play yard, pack-n-play, and a few other words these days. My daughter bought a "pack-n-play". They are pretty portable, but then so were playpens.

Karma misses you when you're gone. Maybe you'll have to take her over to visit Sammy and Annie? ;)

Have a great weekend!

Stopped by thinking this might be "the post", but I see we are still in a holding pattern! Leah look radiant!

I wonder what the cats will think of the new addition?

Wow you guys have been so busy! She will be so organized when baby comes! I bet she appreciates all your help! Karma is such a movie star.....She does love the paparazzi!

Hello my friend...wonderful pictures..and I always am awed by your fantastical cat capers and pictures..they steal my heart every time!!So exciting ...enjoy the baby when it comes..it will be a magical time! enjoy!Yay!
Happy Summer!!

Miss Karma, you come right over to be with Miss Katie and me, her mommy. I fell in love with those crossed paws. xoxo

You seem to definitely have your finger on the pulse there Rita...how exciting waiting for the new arrival.
Princess Karma just doesn't seem to be bothered with all the preparations does she? Hehe
I'll wish you all the best of luck and hope everything goes to plan.
I'll be coming back to check with the stork has been ;)
xoxo

Ooo - a baby on the way! How exciting.

Oh my goodness! I remember the days of being that pregnant. I bet she can't wait to get it done with!

Just wait until Ian Mc starts pulling your tail or ears Karma... then you will have something to take issue with!!!!