A quick hello.
This was the last time I had the patio door opened up...must be four days ago now at least.  The weather has turned hot and humid--most days 80 or higher. 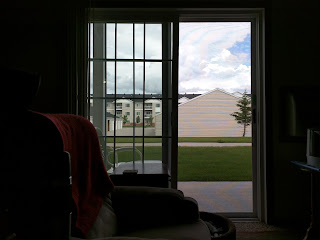 Except for a couple of days this next week (Tues &Weds) in the mid-70s, the predictions are for it to be in the 80s and even 90s for quite a while.  That's the end of the glorious spring days, I guess.  There will be reprieves, I'm sure, over the summer.
****
You have not heard from me for a couple of reasons.  This past week I have had internet issues--and I don't think they're gone yet.  Long story, but from Monday till Wednesday afternoon the tech guy who was here told me I had over 3700 "flaps" (internet drops).  He exchanged the modem and a splitter in the wall--but I still have had issues.  They seem to be a bit better the last couple days, but I still have had some disconnect issues.  He's supposed to follow-up-call me this coming week before he goes on vacation on Thursday.  So, I hope I can post this okay.
****
I have also been sick again for over a week.  Kind of like a relapse of that awful flu with some other stuff thrown in for good measure--awk!  So I am drinking lots of fluids and watching Netflix and reading.  :)  Got my fingers crossed that I might be past the worst of it now.
****
A dear blogger friend, Iggy, sent me a Cat Who trio-story book he found at a used book store!  It had the last book I read (and had wanted to re-read because it has been so long--how perfect is that!) and the next two (that the Fargo library didn't have)--all in one book!  Thanks, Karl!!! 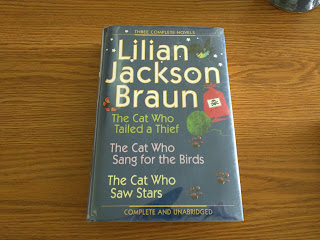 I just found out a few days ago that our volunteer, Kirsten, got a summer job in California!  So she won't be back until August.  Which means, we won't have Library Outreach until then unless Pam can find another volunteer.  So they are just sending someone by to pick up the books people took out on Tuesday.
****
But they are also still bringing me the paperwork to fill out for a new card, though, so that I can order interlibrary books in the future and I guess they have e-books now through the library.  Pam said she'd even come over after they mail me my card to show me how to navigate the library website.  Plus, she said she found me some Anne Tyler books at a used book store I can just have that she's sending along, too, on Tuesday!!  She is such a sweetheart.
****
I also rummaged through my TBR shelf and found a couple more books to read soon.  I will have plenty to keep my busy till August--LOL!
****
You may notice that I only have two pictures.
****
Well, another change has occurred.  Dagan and Leah have switched me over to a new cell phone and new company.  Hang on to your hats--it's Google!  Yes, they most certainly are trying to take over the world!  Trouble is, they are doing a pretty good job of it.  ;)
****
It's called Project Fi.  Leah's been on it since October--being the guinea pig for all the rest of us.  She hasn't had any issues and so now Dagan, myself, and a lot of their friends are switching over when their contracts are up.  I don't use up much of the units (can't remember what they are called right now) so I should pay the minimum--which will be around $25-30 a month.  Awesome!
****
You'll have to search for Project Fi because I can't link it for you now because no matter what I do it brings me to my own account--LOL!
****
Anyways, new cell phone...and it's not set up so that my pics go automatically to DropBox.  Leah thought she had set it up for that when she was here last week, but no new pics have showed up--just these two she moved over.  Not that I have taken many pics in the first place because I haven't been feeling well.  But if I am up to Craft Night Monday night and Leah is, too (I think they have been staining the deck in this heat all weekend and Leah melts like I do)--then Leah might be able to get it working.  Eventually I'll have pictures again.
****
I know--I could get out my old camera but I haven't been using it for so long and I have this new ElCapitan on McLap where I can't seem to find anything now, so I'm not sure I could figure the old camera method out anymore, either--ROFL!
****
So, that's it from my corner of the world.  Karma's sleeping in the chair next to me.  I am hopeful that I will feel up to crafts tomorrow night with Leah...and Tuesday they are picking up library books and Caroline comes to clean.  We'll see how I hold up.  Better than I expect, I hope, because I really, really want to see Little Ian!!  Been weeks!!  Gramma needs her Ian fix--LOL!
****
Have a good week, everybody!!  :)
****
"Be happy for this moment. This moment is your life."
Omar Khayyam
Posted by Rita at 2:15 PM