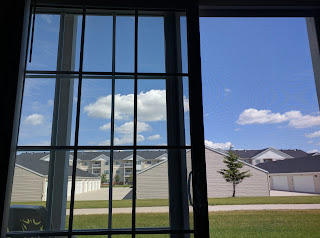 I can't believe it's already been over a week since I posted anything.  The time has flown.  Been too hot and/or too damp to have the patio door open very often.  I change the water and put food out for the critters on non-rainy mornings. 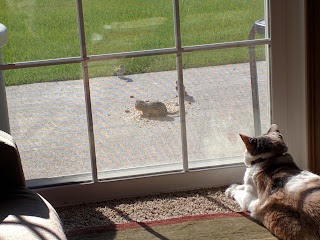 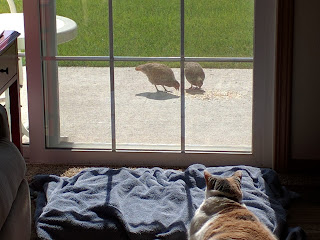 ...but they are always a delight to see. 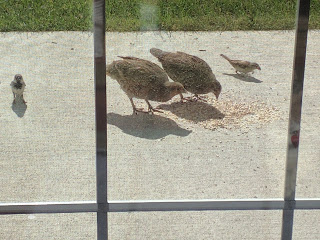 A few days ago I saw this little fellow! 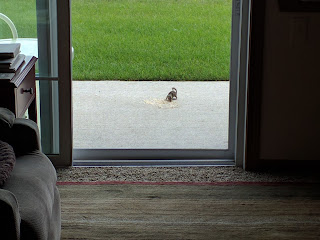 A young ground squirrel!  He's quite feisty and likes to chase the birds away.  Ground squirrels do not like to share, apparently.  Once in a while you will hear a skirmish as a new one wants to take over eating and will drive off the former muncher.  As you can see this little fellow isn't much larger than a sparrow! 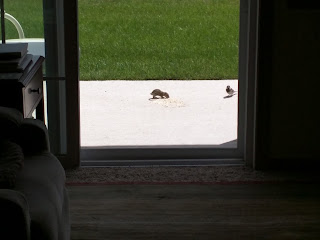 I tried to get a video of the grouse, but by the time I figured out how to switch from photos to video on this new cell phone they were gone.  I will try to catch them one nice day when the door can be open because they sound so much like chickens when they eat!!  They cluck away! 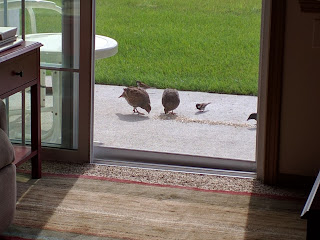 I have been putting down a line of food rather than one big pile so there would maybe be no squabbling.  Well, there's still squabbling, but less of it--LOL! 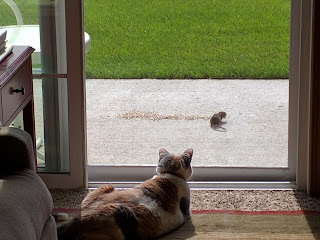 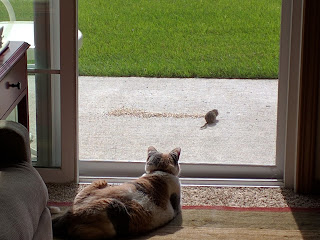 ...and she obviously noticed the difference.  She wanted to just jump right through the screen at this little guy! 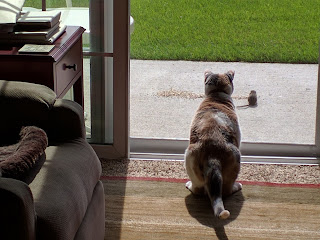 But of course, she can't.  Good thing because the tiny guy certainly didn't pay any heed to the feline licking her chops behind him--LOL! 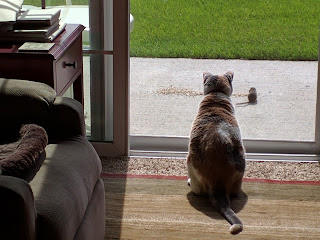 I have been busy with cards.  Trimming down the card fronts. 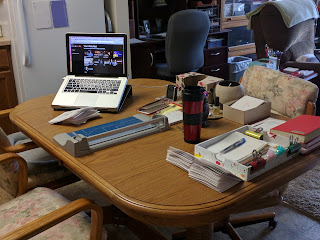 Here I had three sets trimmed down. 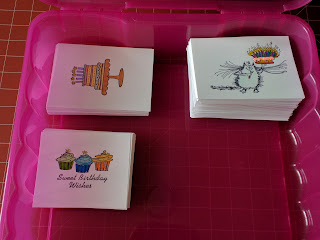 Just kept plugging away at the table while I watched shows on McLap and Karma lazily watched her CatTV Nature Shows. 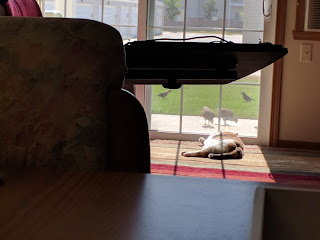 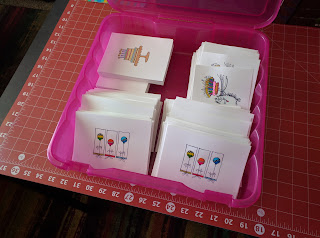 Then McFamily came over and Ian finally got to open his presents from me.  Ian pushed his new lawnmower around in the apartment and outside on the grass.  Then we all went for a walk down the walking path as far as a couple of cottonwood trees that are right past the third building (will be the last one) that is under construction.  It was so windy that the cottonwoods made such a racket that they kind of scared Ian...well, along with the ragged, poky trunk--LOL!  (He was going to hug the tree like Gramma did and I think he thought it might have bit him--definitely dangerous in his mind.)   I am so glad they didn't cut these two cottonwoods down for the construction of buildings.  I wish they were closer so I could hear them singing and chatting in the wind.  :)
****
Dagan took a video of Ian opening his presents but I haven't gotten it from him yet.  If I can figure out how to get it on to the blog, I will.  :)
****
Oh, and I have been in seventh heaven watching AcornTV thanks to Dianne!  (Who just met a brand new granddaughter, BTW.)  I am surprised I never heard of AcornTV since I love my PBS, British detective shows, and any British period pieces.  So, I signed up and now have a bunch of British shows for $4.99 a month (first month free).  Not that I don't love American TV (especially cable shows), but sometimes I am just in the mood for a bit less sex & gore and want things slowed down a tad with more focus on plot and character.  ;)
****
Anyways, that's what's been happening up here in Karmaland.  Today I am doing laundry and making some meals to last me all week.  Of course, bean soup is on the menu.  I'm sure I'll get tired of it one day, but it's been a favorite for a while.  I think I make it every month!  Plan to make some pesto veggies and pasta, too.  Taking a break from cards for the day, but will get back on the next step in the assembly-line tomorrow.  Dagan and Leah have out-of-town company so Leah might not make it for Monday night crafts this week.  I'm still hoping to get these hundreds of cards done in the next few weeks so that we can get going on some other projects.  At least I am able to consistently accomplish more as I am feeling more myself--ahhh!  Nice!
****
Have a fulfilling week!  Hope it's not too hot or too cold, as the case may be.  If you are able, hug a tree!  Been a long time since I have hugged a tree and it was soul lifting.  :) :)
****
"Be content to progress in slow steps until you have legs to run and wings with which to fly."
Padre Pio
Posted by Rita at 12:14 PM

Looks like a beautiful day out in your neck of the woods. It's very hot here but the humidity has lessened a bit from what it was. The other day was unbearable.

Karma has quite a show to see thru that door. I bet it keeps her busy for hours when the critters are entertaining.

I'm sure Ian loved his presents. :)

I'm glad you're feeling better. Have a great week.

Your post hasn't shown up in my news feed yet, but I saw you over here on Facebook. You are getting better, I can tell. So very glad to hear it, and love your wildlife! And Karma, of course. :-)

It's fun to see the photos you take of the wildlife there as we don't have those animals here at all. Thx!

Glad to hear you are felling better and getting more of the things you love to do done ♥ Love seeing Karma and her wild kingdom show :)

Back in the Land of the Living? Good for you!!

So glad you're feeling better :) And so glad you're enjoying AcornTV. Be sure to let me know when you hit on a series you especially like. I've watched several and am always looking for more.

Glad Ian got his presents and (almost) got to hug a tree!

I am a big fan of British shows too!
What a clever idea to put the food in a line Rita.
Karma must get tired from all the excitement and frustration of being behind glass with nature teasing him all day. LOL
Our youngest son was in Love with his plastic mower and would look very serious walking around the yard. We never put bubbles in it. I guess he thought it was real ;-)
Imagining your little tree hugger Ian makes me smile.
oxo

Stay cool! Karma seems to like her TV, I figured she would:)
I have cooked ahead for the warm week too. I hope the warm spell doesn't last too long. :)

Tree hugging IS good! It sounds like you have been having a very productive time lately.. it's good to hear that you're enjoying all that surrounds you. I do owe you an email and will get onto that before too much longer! <3

It sounds like word is getting around amongst the wildlife that there's a free feed at Rita's place. hehe Love the pics!

The cards look awesome! You are a busy girl.

Congratulations to Dianne on the birth of her new Granddaughter. Grandchildren are such a blessing.

I quite enjoy the British detective shows too but, unfortunately for me, it looks like AcornTV is only available to the US and Canada. :( Have you seen The Fall? It's set in Northern Ireland and Gillian Anderson who played Scully in The X-Files is in it. She speaks with an English accent which took a bit of getting used to after I was used to her in X-files. She's a detective on the trail of a serial killer. Only two seasons so far on Netflix but I can't wait for season 3.

Karma certainly has a great show at that window!

I love that tiny ground squirrel!! And it's about a bazillion degrees here today. Good day to stay inside, but I don't have any cute critters to watch! Even Eddie can only wander so far and has to be carried back home it's so hot!

I'm glad you were able to hug a tree. A life affirming thing to do.

When I looked at the photos of Karma, I thought what a lucky cat to have so much to look at without stirring from her favourite spot! lol.

Lovely weather and such nice visitors. Karma is looking well. Hope you are feeling good too.