Good afternoon.
This was an unusual sight!  Three of the jackrabbits sharing seed so close together! 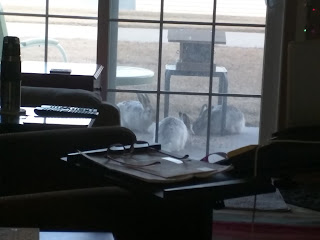 They are not usually good at sharing.  First time I have ever seen this generosity of spirit...and haven't seen it since--LOL!
****
Caught a shot of a jackrabbit, the two grouse, and some sparrows all visiting at the same time.  Note--no snow. 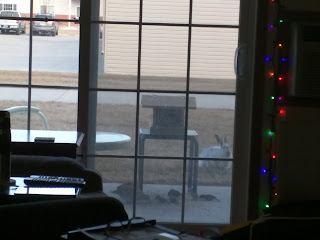 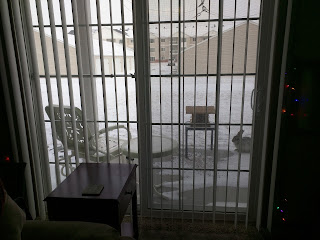 Lots of paw prints the next morning. 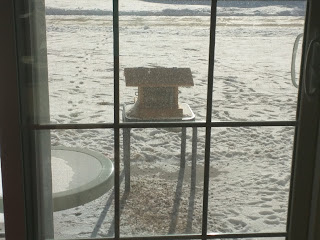 It all melted again.  We then had below zero weather for fun and supposed to pop up close to 60 on Sunday before it gets cold again.  Sounds like there's been see-saw weather all over the place--and blizzards out east with tons of snow.  Just nutty!
****
Well, I want to apologize and explain why I still have blog comments and emails I haven't responded to for over a month.  It is because I still can't see very well close up even with the reading glasses.  The few comments or responses I have made are done when the eye strain isn't as bad and are usually brief.  I am not online much.  When I am--I mostly skim blogs or watch youtube videos.  Watching videos is easier, so you know what I've been doing more of--LOL!  Sorry.
****
It's hard to explain but trying to read on paper or on a screen...well, the words dance, jerk and kind of crisscross each other.  It is hard to focus for any length of time and that gets harder as the day goes on with tired eyes and the perpetual headache.  I tried to draw a kind of example.  If I close one eye and try to read the lines have waves in them.  But the wavy lines don't match up from eye to eye--so they are constantly fighting each other. 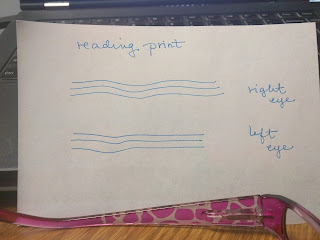 I have a set of three Costco 2.5 reading glasses and the pair of 1.5 pink ones borrowed from Dr. Dye.  Trying all four pairs--none of the waves are exactly the same from one pair to the next or from one eye to the other--LOL!  This is good news, I think, because he did say there were special lenses to correct double vision, right?  And with some of these various lenses I can almost see a straight line of print in one eye...and with one pair the usually worse (right) eye even went to the other (left) eye and the right eye could almost see a straight line of print.  So I think it is hopefully just that I need prescription lenses.  Which I won't have till probably in April.
****
But not being able to read or see close up has put a definite crimp in my days, I can tell you.
****
Leah and Ian were sick.  Ian had/has an ear infection.  I was feeling sick with a cold for a week, too, but nothing as bad as they had.  So Leah and I didn't have a craft night this last week.  I did make an extensive "baby steps" list for clearing off and organizing in the studio...which extended into the hallway and my bedroom, too--LOL!  You know how that goes.  Took a couple of days working 10-15 minutes at a time (hence the baby steps list), but I got things shuffled about and the tables cleared off in the studio so we are ready to set up the sewing machine for the next project. 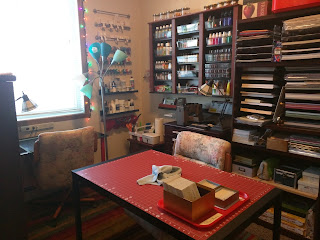 Nothing left but the Christmas cards which are almost done (and a dust cloth) on the black table.  I suppose I should call it the red table since that huge red cutting mat is always on top--LOL! 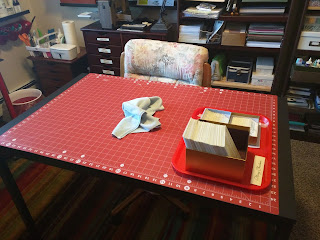 I got the little art table cleared off, too. 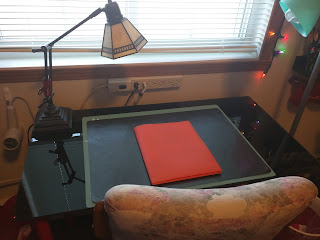 Removed the lazy susan from the taboret, filled the new handled plastic tote, and found spots for the rest of the stuff we had on the lazy susan all these years. 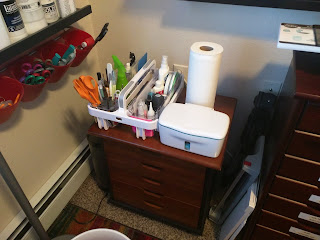 Moved some things around up on top of these two bookcases... 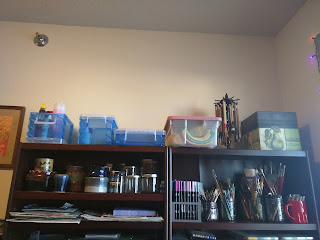 ...so I could clear off the top of the tall skinny cherrywood drawers.  I want to buy another handled plastic tote for on top here. 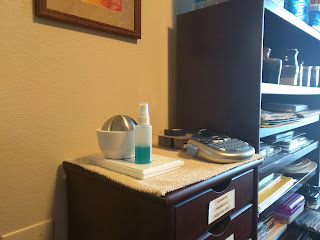 These satchels were on top of the one bookcase in the studio...now moved out onto the top of a hallway bookcase.  (And that stuff was moved into the top of my bedroom closet...the domino theory of cleaning, eh?  LOL!) 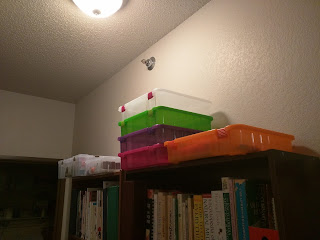 I even cleaned out and rearranged the two Ikea carts.  Notice one empty shelf!  Whoohoo! 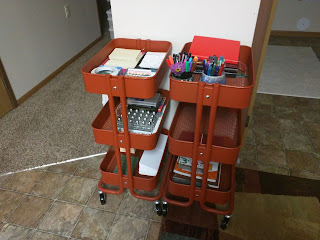 Easier for me to do bigger things like this than to work on cards or type or read or write...
*sigh*
****
I have been managing to write letters a little here and there.  Mainly because, even though it is still quite blurry, my hand can write automatically by memory.  ;)   Plus I am bored and restless...anxious to be able to do all the things I am so used to doing.  As I said before, just sitting and watching TV gets sooooo boring to me.  *sigh*  I am trying to be patient.  Sorry to the people I have managed to write to because I was probably cranky and whining to them, too--LOL!
****
But this is why you haven't heard much from me.  Which is probably a good thing, you know.  Between not feeling great at all, not being able to see that well within a foot of my eyeballs so unable to do hardly any of the things I love to be busy with, the constant headaches, internet issues I haven't felt well enough to call about, getting forms in the mail telling me I might be charged co-pays of over $700 for the eye stuff (more coming), the eight girls (grouse) have never returned since the first faux-spring, haven't seen Chester for a couple months, and I do miss my Karma...well, I am not very good company, anyways.
****
But I will end with some pictures Leah's sister, Ariel, took of McFamily at the big aquarium at the Mega Mall when they went down for Dagan's heart checkup. 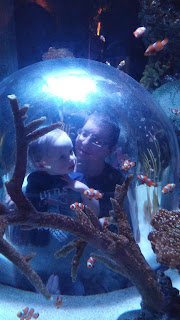 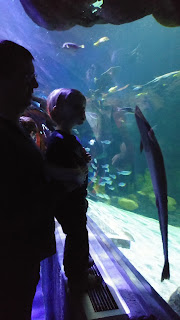 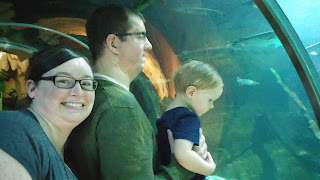 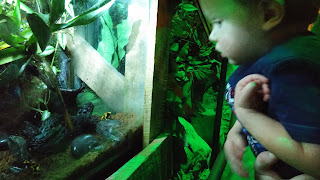 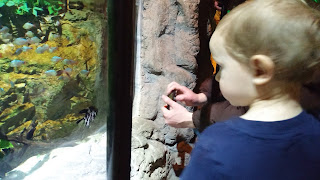 Looks like Ian had a fun time!
****
So--for now--don't be surprised if you still don't hear from me for a few more weeks.  But I am loving each and every comment and email...even if I haven't answered all of them yet.  Well, most of them.  I can enlarge the print on the screen to read them cause Leah showed me how on Mr. Rusty.  ;)  And every letter and card are treasured (and more likely to get a response these blurry-eye-days).  Bye for now from this cranky old lady in Fargo--LOL!  I'll be better when I can freely be online and work on crafts and see to hook my bra--ROFL!!  ;)
****
"Patience is bitter, but its fruit is sweet."
Jean-Jacques Rousseau
Posted by Rita at 5:29 PM