Been a long time.
Just looked--been five weeks!
When I felt decent I was busy...and then recovering from being busy--LOL!  The energy yo-yo.  Dagan was over on the 4th to help me take the snow shovel and broken chair out and bring in the fans.  We had already hit the 80s by the beginning of May.
****
I scrubbed down the fans, humidifiers, and the metal chair & table (you can see the metal glider chair on the left side of this photo) that have been out there since I moved in. 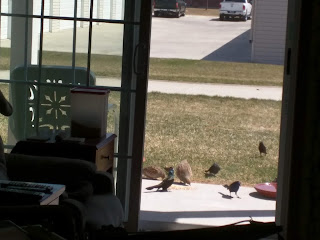 I decided to move them to the garage for now.  Well, let's be honest--Dagan moved them for me--LOL!  Love them, but my patio is small and I wanted to try it with just the two brown lawn chairs this year.
****
I had Ian on Saturday April 28th and Sunday May 6th while they went to look at the Parade of Homes both weekends.  Gramma Days!!  They brought dinner over afterwards both days--so nice!  On Sunday Ian even helped Dagan and I as we switched out the chairs and brought out the humidifiers.  Ian got to push the cart out and then get a ride on the way back. 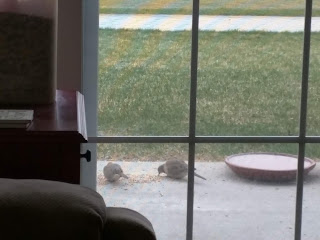 As you can see from the first couple pictures, the grouse, grackles, sparrows, and mourning doves are around every day to entertain Annie and me.
****
Leah came on the 1st and the 8th for crafts.
She also cut my hair for me.   :)
I love our craft times!!
****
Leah picked up a small table for me on sale at Target that pretty much matches the one I already had for the brown chairs--tada!  And she also picked up some flowers from Costco for my planters. 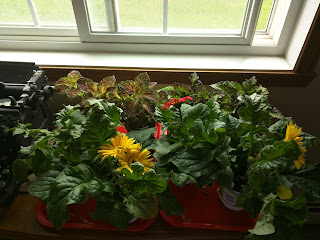 Have had them next to my bedroom window.
Coleus and some kind of daisies--red and yellow ones. 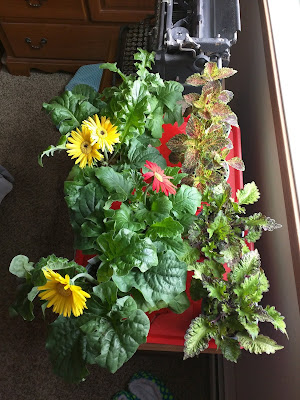 We are going to try and make it to Baker Nursery and do the planting tomorrow!  (I'm the questionable part more so than the boys--LOL!)  I will show you the patio when it is all put together.  Maybe I should get a before and after!
****
I ordered a Hippo journal in December.  Was a kickstarter project.  I was late into the final orders and they said it should be ready to ship in January.  Well, it finally arrived...May 16th...two days after it said it was "out for delivery".  Mangled much!  Maybe it was delivered by hippos--LOL! 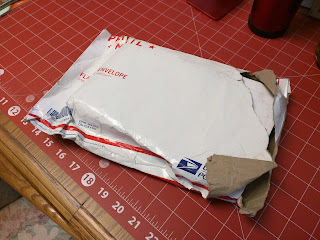 But amazingly the journal was in perfect shape because it was packaged inside the thick white cardboard sleeve. 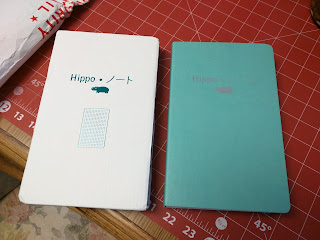 Because it took so long they had sent out an email saying they were sending along various gift items to all the people who had been waiting for all these months--so that was nice.  There was a pen holder you could attach, but I think that comes with it.  I think my gift was the plastic page protector on the right. 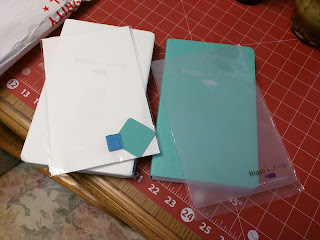 You slip it behind the page you are writing on to protect the one underneath.  Useful if you have thin pages like this Hippo has and a heavy hand--then it won't dent the next page.
****
My turquoise Hippo came with two bookmarks in blue and green. 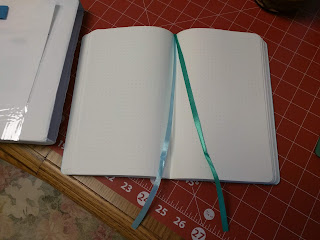 It's smaller than a Leuchtturm but fatter.  No index or numbered pages.  Has a pocket in the back--kind of thin paper so I don't know how well it would hold up.  Cover is floppy--not a hard cover.  500 pages of, I believe, Tomoe River paper--fountain pen friendly.  But now I wish I would have ordered a blank one and not a dot grid.  I can't write on dot grid that well with my wonky eye and I'm not sure I would use this after all for a bullet journal because I'd have so much less space on each page.
****
They are the same height. 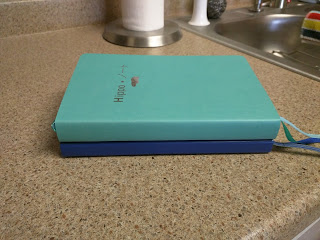 But the Hippos are 3/4 inch shorter in the width of each page! 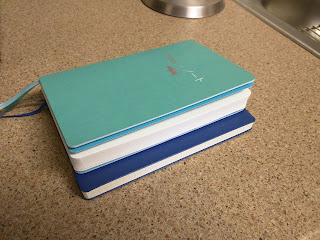 More pages, but you lose a lot of real estate.  ;)  It's a family company and I bought one for the $33.00 pre-order because the Leuchtturm runs around 250 pages for about $20.00.  But now they're going up to $40.00 and I wouldn't ever pay that much for one.  Sorry.  Not really a thumbs up from me--unless I change my mind in the actual use.
****
We have had some beautiful cooler days, too.  (My favorite, of course.)  Unlike this 80s day where I was closed up with the AC on trying to take pictures of the fluffy white clouds that almost looked fake--scattered loosely about.  Couldn't get one that didn't have the rings showing from the light hitting the screen.  Oh well, I tried.  I am easily impressed by small things.  ;) 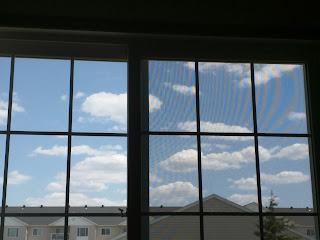 I ordered a whole bunch of art supplies for Ian for his birthday next month...and a few things for Christmas...and some that might have to wait till his next birthday--LOL!  Can't tell Gramma is excited to be able to do crafty-arty things with Ian on Gramma Days, eh? 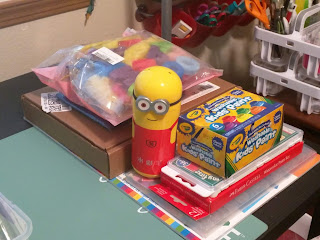 I know he's old enough for some of them--like finger painting with a new smock.  ;)  Eventually little brother Liam will be using some of these, too.
****
Took pictures of some of the new goodies Leah and I have purchased this year because I realized when we got a big order we went in on together that I haven't shared pictures for a long time of the new craft stuff.
****
These are stamp sets. 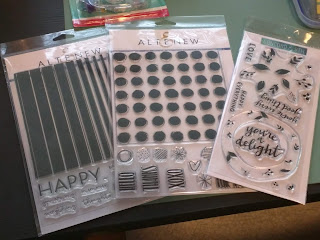 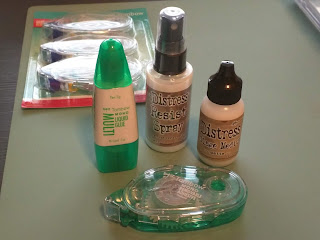 Leah has plans for these heart dies.  She used the one of the left for Mother's Day cards when she was here. 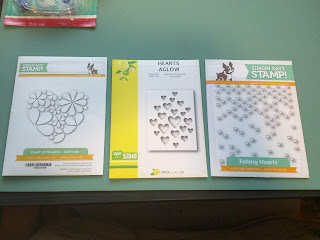 Leah said this one is for gift card holders. 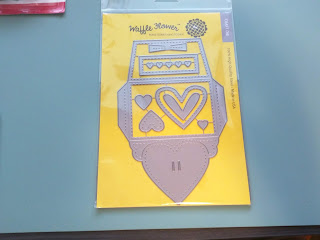 We have some plans for these dies... 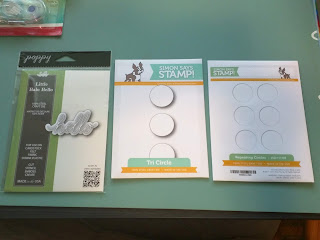 ...and here are Christmas dies. 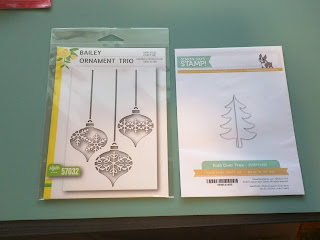 Yes, we are always on the lookout for Christmas card ideas.  ;)
****
I also packed up three big bins with winter clothes and hauled them to the garage for the summer.  Proof I truly believe summer is on the way.  Had an apartment inspection on the 8th so I had done an extra good dusting, cleaned up the place, and cleaned off the patio.  I was so glad to finally have some energy again!  Was really getting a lot done...maybe too much.
****
Got sick again on the 9th.  Had to cancel Craft Nights and Gramma Days for a while.  Seemed like a relapse of what I had for two months--but, at least, this time I started to feel better after about a week instead of two months.  :) :)
****
Funny--I think Annie prefers me being sick.  She loves the peace and quiet here soooo much that she already doesn't like it when I am buzzing about--even if my buzz is not as fast moving as it used to be--LOL! 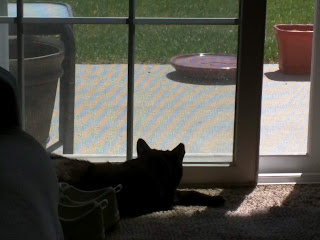 So that's why it has been so long since you've heard from me.  But Annie and I are doing fine.  I'm getting back into being functional again.  Had a wonderful afternoon with Ian on Gramma Day.  He is practicing with real brushes and a bowl of water in his Paint With Water books.  Gramma was playing with watercolors.  If he gets the hang of how to use and hold a paintbrush...Gramma has a kids paint palette he could get on his birthday next month.  If not--Christmas is coming--LOL!  Don't want to give him supplies he can't handle and end up not being able to use them, you know?  We have plenty of time and tons of things to learn and play with.  :):)
****
I have pictures and videos from Leah to go through and there will be more to show you.  Hopefully I will stay well AND not overdo it so much this time.  ;)  My tentative plan is to attempt to post once a week on Mondays.  No promises.  My whole life is tentative--LOL!  But maybe I will see you next Monday.
****
I'll leave you with pictures of Annie who likes to watch for the jackrabbits toward dusk. 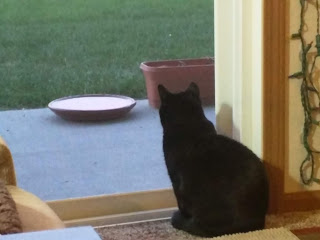 We don't see them as often since it got warmer out. 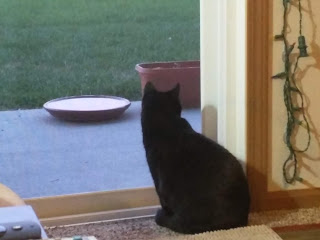 There are also only two pairs of grouse who come around since it got nice out.  The duos come separately and do not like each other...which means we get to watch some rapid-footwork-chasing back and forth on occasion.  They never hurt each other...just race about chasing each other.  Silly grouse.
****
That's it for now.  You're basically all caught up with the big stuff.  :)  I have been around to read blogs even if I haven't commented all the time.  I hope you are having as lovely an afternoon as we are here.  Till next time!  :) :)
****
"For happiness, how little suffices for happiness! ...the least little thing precisely, the gentlest thing, the lightest thing, a lizard's rustling, a breath, a whisper, an eye glance--little maketh up the best happiness.  Be still."
Friedrich Nietzsche
Posted by Rita at 4:29 PM