Good afternoon!
Was 12 years yesterday since I started blogging.  Wow!  Time flies.  :)  I haven't been the best blogger so far this year, but I am trying to get back to regular posts.  Thanks to all of you who have hung in there and stuck with me.  I have met some of the best people, made new pen pal friends, and met people from all around the globe.  We really do live in the best time!  :)
*****
Well, I found out something this week.  Annie is afraid of thunderstorms.  Makes sense, I suppose, as she hates loud noises.  Last Tuesday night she was sleeping on my chair while I was watching the end of an episode of Poldark when suddenly lightning lit up the living room even with the blinds closed.  A crack of thunder ejected Annie from the chair like an explosion of black fur!  Out of the corner of my eye I caught a black streak darting into the pantry.
****
I thought that since there had been no warning and it was like the storm had developed right over us that probably the surprise had caused the extreme reaction.  I finished the Poldark episode to flashes of light, snapping thunder, and the pelting of rain on the air conditioner.  When I was ready I went and found Annie huddled in a corner of the pantry--thinking she might want to cuddle with me on the bed for comfort.  I carried her trembly body into the bedroom but the second I set her on the bed she raced into the bathroom and hid behind the toilet.  I am no comfort to Annie when she's afraid.
****
But the next morning the sun was shining and Annie was taking in the rays. 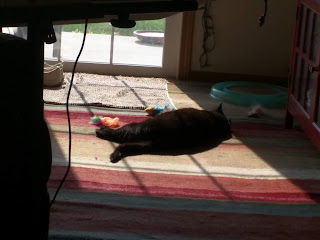 I wonder if her fear of thunderstorms has something to do with being abandoned on the street when she was a young thing?  I imagine her being outside trying to find shelter in a bad storm...she had to have scary times.
****
This morning I woke up to rain and I thought I heard some distant thunder.  While I got ready for the day Annie hid behind the toilet in the bathroom.  Apparently the thunder doesn't have to be right overhead.  Annie did manage to slink down the hallway and into the pantry so she could get her morning bit of canned food.  But then she wouldn't come out of the pantry long after it quit raining.  Finally she must have realized the danger was past (my telling her so had no effect whatsoever) and she finally made her way back out into the world...our world--LOL!
****
So Annie is very afraid of thunder.  I learned something new about her this week.
****
Right now she is sleeping in the chair next to me at the table here.  I think she had an exhausting night hiding in the bathroom, poor thing.
****
Meanwhile, we've had critter visitors, of course.  You'd probably have to enlarge this to see the newest visitor--a red-winged blackbird.  Or orange-winged blackbird.  I grew up with them as a kid and heard them called by both names so I am not sure which is correct. 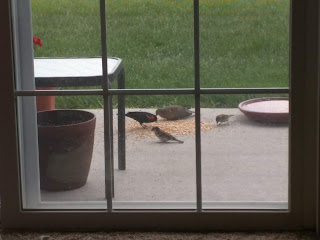 And this past week or so the ground squirrels have discovered the bird seed on my patio. 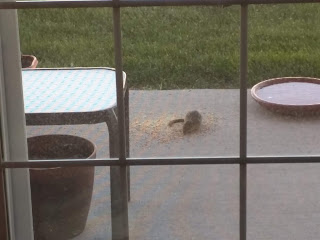 I had Gramma Day all day on Saturday and Ian and I saw a ground squirrel out there every time we turned around.  We waited until it filled it's pouches and left before we went out to pull weeds around the patio (some of the bird seed had germinated).  Low 90s and about the same in humidity--awk! 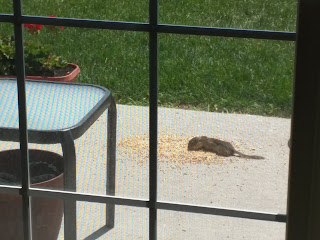 Turned out yesterday I saw one ground squirrel waiting for the other one to leave so it could get seed--so there are at least two of them!  I was just about thinking to stop putting out seed for the summer...and now I won't, of course.  I do love those thirteen-striped ground squirrels!!
****
Ian and I were busy all day.  We watched the movie WallE, ate lunch, checked my mail, watched the ground squirrel(s), picked weeds, looked at old Bubbles laying about... 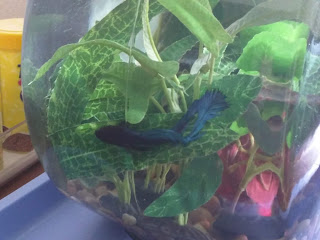 ...and then, since Ian didn't want to paint, we tackled another project.  I took a picture in a text for Leah--not knowing that I could never get ahold of it to show you...and believe me I tried.  Even when I figured out how to download it to my laptop it will not let me open it.  *sigh*  Lesson learned.
****
Anyways, we misted 25 sheets of white cardstock for Christmas cards.  We used the red trays to dry them--stacked crosswise.  Ian couldn't manage the misting bottle (tried) so he was in charge of stacking the red trays crosswise.  He had to get a stool to he could reach high enough to stack them.  Did a great job!  So--one step done on the assembly-line and Ian can say he helped!  He was very pleased.
****
I had Ian on Saturday because Leah's good friend, Amber, is moving back to Fargo and drove up from southern Minnesota to look for a place to rent.  She wanted Dagan and Leah with for a second opinion and Gramma was more than happy to take Ian for the day.  :)  I'll take him next Saturday, too, because they plan to clean house for Ian's birthday party the following Sunday.  (I volunteered!)
****
When Dagan came to pick up Ian he helped me empty the big, old litter box.  He took out trash while I sprayed down the litter box.  Then--I decided to take the risk and have Dagan bring the old litter box out to the garage.  Annie would suddenly have no choice and we'd see how she did.
****
She's doing just fine with it!! 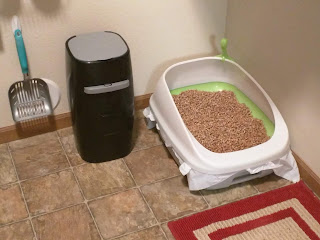 I think it really did help adding more and more pellets to her old box so she got used to the chunky feel of the wood pellets first.  Anyways, I am delighted!  Good for Annie, the environment, and my pocketbook.  :)
****
Speaking of Annie.  I went to take a picture of her sleeping on my leg last night... 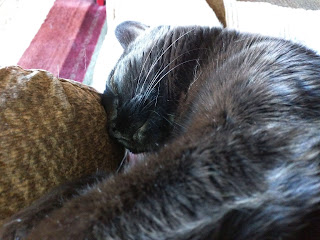 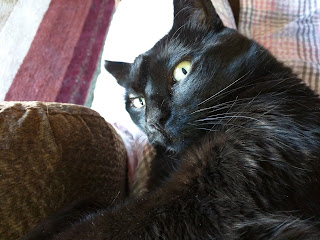 I had removed my hand to take the picture.  As soon as the hand went back on her tummy she conked out again. 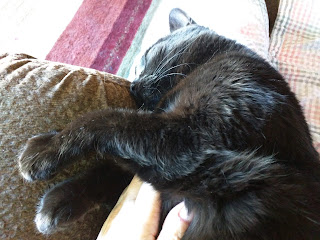 I may not be a comfort to her during a thunderstorm, but she does like my company now.  ;)  So much so that she often makes it difficult for me to write letters in my chair.  Her feelings get so hurt because she takes it as personal rejection...and I am a soft touch.  LOL!  :)
****
Well, this week I am hoping I can go with Leah to a craft store (or two, if need be) on Wednesday.  We want to find 25 sheets of green card stock in a green we like.  It's been such a long time since we've been out shopping together!  I'm praying for a good day so I can go with.  :):)
****
In the meantime, I have written another Monday blog and am doing laundry.  Even though it quit raining, it's a dark day--but the rain did cool it off.  Nice!   I hope you are having a positive day and it will be a really sweet week for you and yours.  Feels nice to be getting back into regular blogging again.
****
Life is good.  :) :)
****
"May you embrace this day, not just as any old day, but as this day.  Your day.  Held in trust by you, in a singular place, called now."
Carrie Newcomer
Posted by Rita at 3:11 PM