Good afternoon!
Was not a productive week, shall we say.  I'm not that sick anymore, but being sick wears the spoons right out of me--LOL!  I got all the usual stuff done but nothing on the Never Too Late To Begin Again book.  Ironic, don't you think?  LOL!  Anyways, fresh start this week.  Wish me luck.  :)
****
There's been grouse upheaval.  Another covey of grouse arrived beginning of the week and massive chasing ensued.  [Note: I may have been feeding two coveys all along but they avoided each other successfully before it got so cold that they were more desperate, you never know.]  Anyways, I rarely see the eight together since then.  Three.  Six. 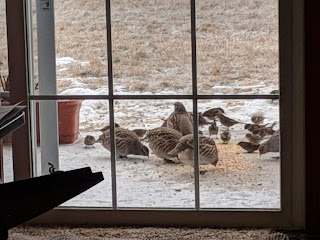 I am visited more frequently, so I figure they are all hanging about nearby and have learned to time share.  One often keeps watch while they eat, though. 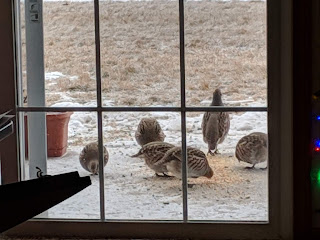 Apparently some have made new friends and relationships have shifted.  But they are all looking good...and I put out extra seed.
****
I told you I did order a few more frivolous items this month.  Not that they won't be used and treasured, mind you.  :)  From JetPens I got this roll of washi tape that is actually layered individual cacti.  So cute! 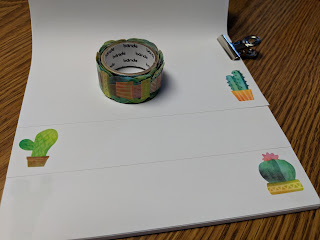 I often use washi tape on my writing tablets to pretty them up.
****
I've been into multi-pens recently.  Never thought I would like them, honestly.  I started with Frixion because I use those all the time in my bullet (erasable).  Actually, now that I think about it, I have been using these for several years.  Funny how when you get old enough only a few years feels like recently--LOL! 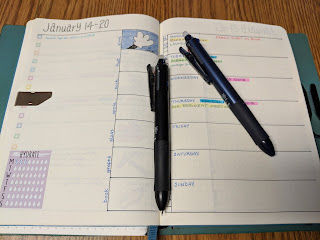 The only thing I don''t like about them is the buttons are pre-colored so if you like to color-code and love variety you need a scratch paper nearby to check which color is which.
****
But I liked using those so much...well, I do love the needle point nibs on the Pilot Hi-Tec-C pens and discovered they had multi-pens.  Their buttons are built right into the refills in the appropriate color!! 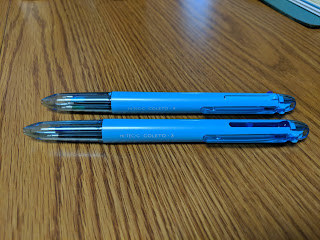 I've been using these for over a year now.
****
I also have always loved the Uni-ball Signo UM-151 Gel Pens and have been buying those for many years.  Well, they have a Uni Style Fit Multi Pen.  Okay--I went wild!  There's a rainbow pack of 16 refills you can buy...and I got the three dotted holders that hold five refills each!
Whoohoo! 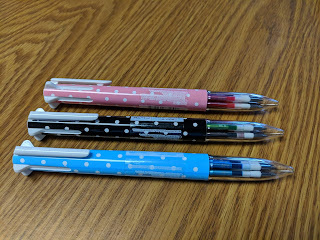 So the one refill I left out was the yellow one.  But when one of these refills is empty I'll pop in the yellow one.  You can see that these holders have a clear end where you can see the refills.  That is how you know what color you are using.
****
I know.  I am a pen nut and am like a little kid when it comes to new pens, but...what fun!  :)
****
The last item I got was from Amazon.  They do sell these at Office Max in town so I figured if I liked it I could get refills from there, too.  Anyways, many years ago when I first saw disc notebooks I tried to flip the pages and they were just terrible!  Stuck and were so difficult to use.  That was so long ago I don't even remember where I was...a little shop in Minneapolis, I believe.  But I thought who would like these disc notebooks?
****
But they've been around now for decades.  I finally took a chance and ordered this TUL Office Max one.  Nice cover. 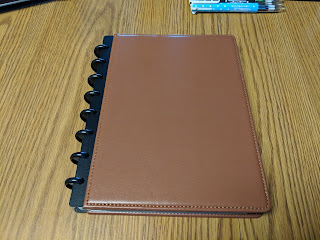 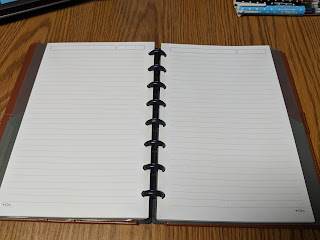 I ordered a couple of pocket folders, too, because they were inexpensive and popped one in the front and one in the back.  It has flat pockets built into the cover in the front. 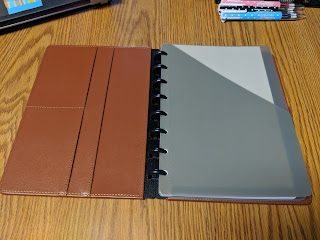 The back of the cover has a pen holder. I was shocked at how smoothly the pages turn! 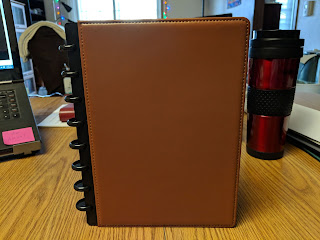 Some of you may have been using disc notebooks for years, but these are brand new to me.  I hope the pages can be taken in and out a few times without them getting too bent up.  Time will tell, eh?  Anyways, I was pleasantly surprised.  Now I see why people like them.
****
Was a very quiet week.  Had some winter weather--wind advisories (30-50 mph gusts), wind chill advisories (not even sure--maybe 30 below or more), frost, fog, freezing drizzle/mist.  Did see the sun a couple of times.  The patio door was frozen shut on Wednesday.  The girls had to scrounge for one day, but I had put out extra the day before so there was still a little out there.
****
This fitness tracker Leah had gotten as a present (she already had one) that she set up for me...well, three strikes and you're out.  I don't know what it is with me and fitness trackers but I did have trouble with stopping watches even with new batteries, so maybe it's my electric personality--ROFL!  Anyways, this one also never knew when I was awake or asleep.  I am up and down--say I was up three times during the night it would only report that I slept one of those sessions out of four.  And I would wake up with 700-900 steps already!?  Sorry.  I have never been known to sleepwalk and I don't think I was marching around my apartment during the night.  Straight trip to the bathroom and back--LOL!  Yes, I'm stiff and do take smaller, hobbly steps, but I am not Tim Conway!  Give me a break--ROFL!  So, I have given up completely on fitness trackers.  Unless they come out with some kind of geriatric version--LOL!  So funny!
****
I had to get a picture of this.  I have only seen Annie in the little recliner maybe 3 or 4 times since she's lived with me.  I was surprised she had given up her memory foam spot that day (but where she is right now--out like a light). 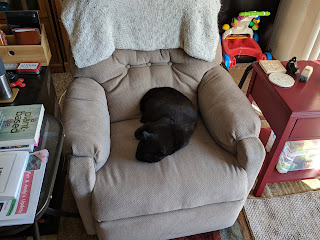 Leah dropped off this holder thingie that goes over the back of my pantry door to hold... 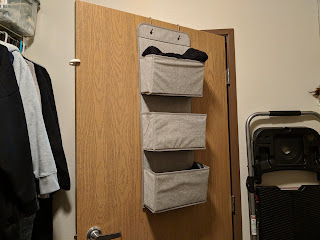 ...the set of attachments she got me for my Dyson!!! 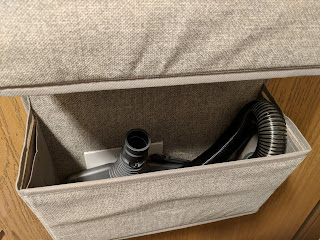 And she brought me my new (red of course) instant filter water pitcher! 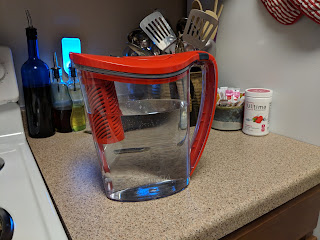 Easier for me to lift than the huge one I had--that was starting to leak.  It had been Dagan and Leah's before they gave it to me, so it was well used.
****
The wheel on the cart is doing fine so far, too.  :) 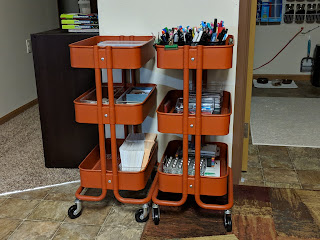 ****
Well, I may have been tuckered but I wasn't going to miss Gramma Day on Saturday.  :)  Leah brought with Subway for Ian and I for lunch!  Ian was tired from swimming lessons that morning.  Since we were both tired we curled up in the chair after lunch and watched three episodes of Mighty Machines!  Then we had our Subway cookies for a snack and I got out something fun I have had tucked away for months.
****
It's a set of blank puzzles for you to color or draw on.  They came with envelopes, too.  We got out his minion markers and I told him he could go wild and scribble to his heart's content.  Gramma joined in, too! 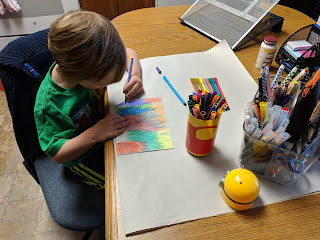 Ian didn't notice I was taking pictures.  Asked him to look up--got his "huh?  what?  I was concentrating" face--LOL! 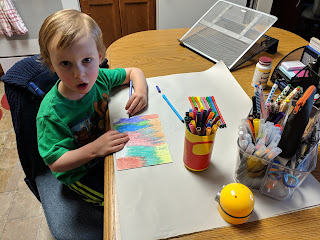 He made a puzzle for Mama, Daddy, Aaron, Gramma, and himself.  Blue is his favorite color he told me, so you can guess which one was his.  Then we had to take them apart and put them in the envelopes. 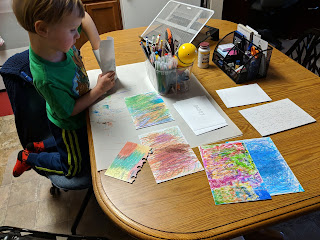 I got a really big envelope to put all the little labelled envelopes in so they would have no idea what the surprise was.  We sealed them all with washi tape to they can be resealed. 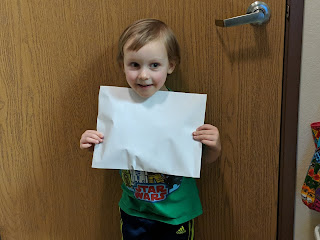 Ian was so excited!  He loves puzzles. 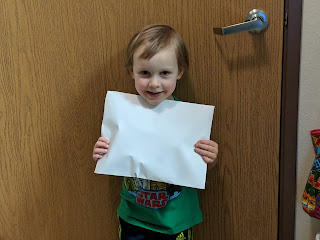 Daddy came to pick him up.
Gramma morphed back into zombie-woman--LOL!
****
This past week I finished watching DCI Banks on Prime.  Watched the new season of Murdoch Mysteries and started on the new season of Brokenwood Mysteries both on Acorn TV.  Watched season three of Frontier on Netflix streaming (dark show) and rented Book Club and Masterpiece Theater's The Miniaturist.  A lot of down time this past week.  I am so grateful I have so many pain/cruddy day escape options!!  :)
****
Four of The Girls are here to peck away.  One is the window peeper!  :)  Have loads going in the washer and dryer...one more to go.  I just asked Alexa and it's 22 degrees right now.  My colored lights are twinkling on this dark, grey day.  I am hopeful that I will be able to actually start on the book now this week.  I knew I would have some bad days/weeks during the 12 week course but I hadn't expected the whole first week to go by the wayside--so funny!  Such is my life.  I will get through it--even if it takes me till this summer--ROFL!!  It was a really good week, regardless.  A really good week.
****
OMGosh!  Grouse wars!  There were at least a dozen grouse racing, screeching, and chasing back and forth out there--LOL!  It was all over in a few minutes and right now there are eight...yes, eight--just counted them...eating on my patio!  Maybe the original eight?  They are so funny!
****
See you next Monday.  :) :)
****
Oh, and I saw this quote and thought and knew I had to post it today.  This has been my goal my entire life.  Not easy, but worth every effort and every moment's focus one can muster.  Maybe one day I will get there.  Never give up, right?
****
"I swear I will not dishonor my soul with hatred, but offer myself humbly as a guardian of nature, as a healer of misery, as a messenger of wonder, as an architect of peace."
Diane Ackerman
Posted by Rita at 2:49 PM