Good morning.
Well, I went to the walk-in clinic to get the x-rays on my foot and knuckle. 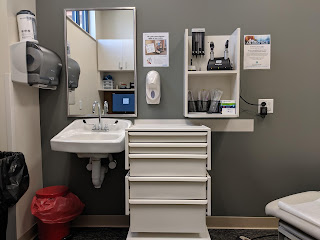 Didn't show any obvious fractures or osteoarthritis problems.  So, he thought it was likely gout because that doesn't show up on x-rays. 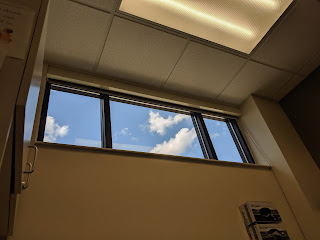 Usually starts in the big toe where mine was all three middle toes and a knuckle.  I also had some swelling in that ankle and knee--edema?  So he told me to stay off my feet, take ibuprofen, and use ice packs for ten days.
****
Leah stopped by a CVS to pick me up some ibuprofen.  (Mine had expired in 2004--LOL!) 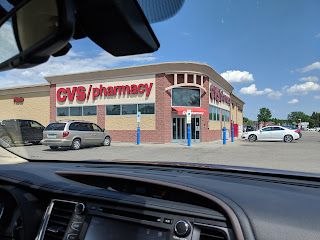 So, I've basically been trapped in my chair since--with the burning, painful foot and then adding a swollen knee that also makes it hurt like hell to walk. 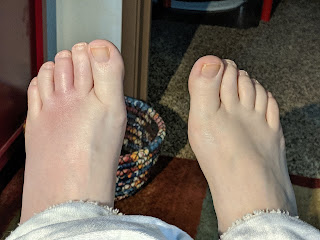 I'm not sure what I did to make the knee worse.  Could have been just the awkward, painful positions they put you in for the x-rays and I twisted it?  Leah lent me some ice packs--one larger, heavier one.  When I saw my knee was more swollen (makes me think twisting it getting x-rays as it was already more swollen and painful) I put that heavier ice pack on it and fell asleep.  Woke up to it being much worse.  Annie might have laid on the knee, too.  I forgot to put a pillow over my leg to keep her off of me.  Regardless, I am hobbling about and mostly in my recliner with ice packs or the heating pad.  (He did mention I could try heat, too--neither of them are doing much but they both feel good--LOL!)
****
On Friday Leah and Ian went to Baker Nursery for me and sent me pictures of flowers to choose from.  Then they came back here to plant my patio for me.  :)  Ian has new duck garden gloves I wanted to get a picture of. 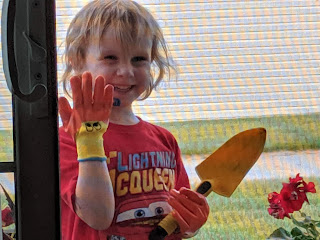 He said I needed to get the back of them, too. 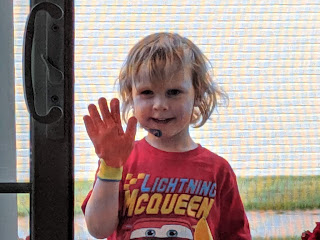 They planted, set up the new hose (old one broke late last fall), and lastly Leah sprayed for voles. 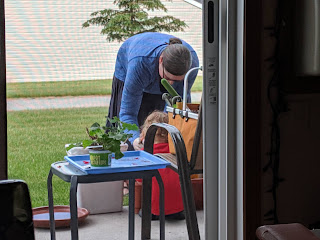 McFamily has them, too, a mile away.  Vole population explosion around here.  They're digging up lawns something awful.  The spray is a repellent made from castor oil and soap.
****
Anyways, I filmed a little of Leah and Ian working out there...wishing I could have been more a part of it.
Next year.  :)
****
Leah took pictures for me for the blog when they were done, 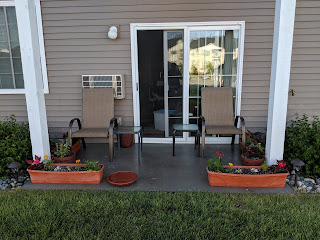 My new hose is red and came with a new sprayer. 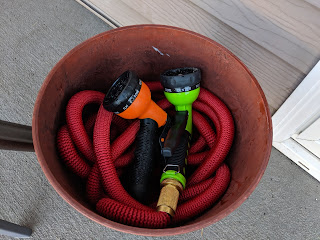 Not that I've been able to go out and use it.  I don't dare try to walk across the big rocks out there to get to the faucet, to be honest.  Just getting to the bathroom or the kitchen is an ordeal.  I haven't even been able to make it down for mail. 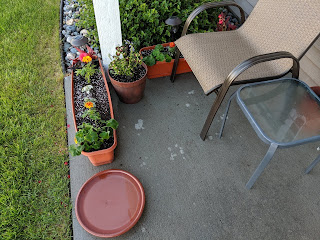 Thank goodness it has been cloudy and drizzly off and on ever since Friday... 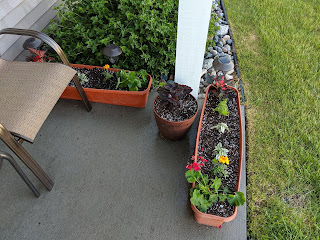 ...but I will need to have Leah come over to water them. 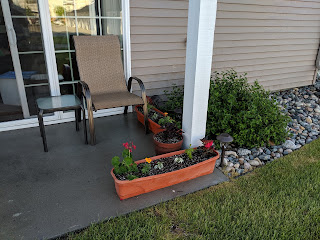 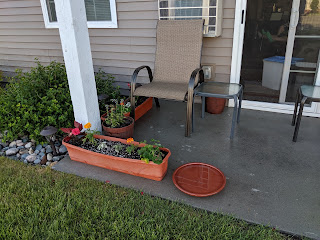 Looks so nice!!
****
You may recall Leah had picked me up some red geraniums and these begonias that I had in the bedroom for a few weeks. 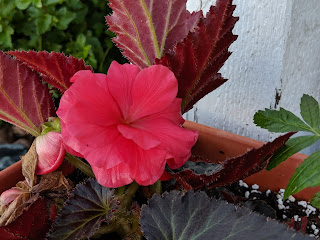 In the four longer planter boxes we also added some marigolds (Ian picked out)... 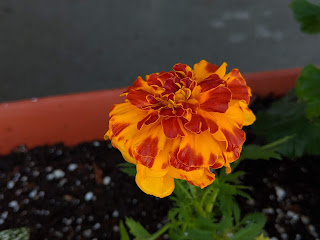 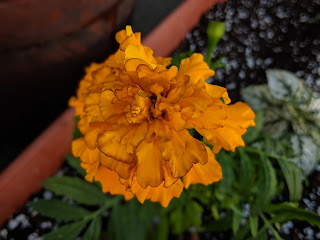 ,,,and some "Hypoestes" or White Splash? (Never had these before) 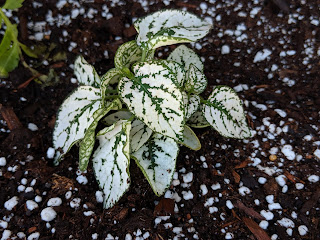 Then in my two round pots I planted two different kinds of coleus. 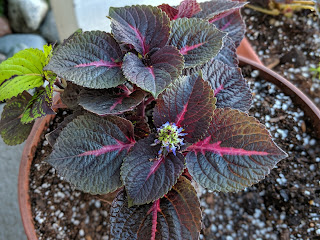 This one is wild looking, eh?  LOL! 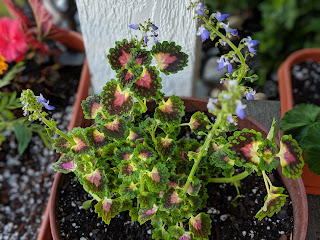 ****
Leah made it over to work on cards earlier in the week.  She got the red card stock cut and folded for card bases...which I thought I might work on last week--but, honestly, it hurts too much to move around any more than I have to.  Maybe this week...
****
So that's it from Fargo.  I think my words for the week have been patience and endurance. I do so hope to be feeling better by next week.  :) :)
****
"Even a happy life cannot be without a measure of darkness, and the word happy would lose its meaning if it were not balanced by sadness.  It is far better to take things as they come along with patience and equanimity."
Carl Jung
Posted by Rita at 10:38 AM

I'm glad there's nothing broken. I knew someone once with gout, and diet was a big part of his treatment. I hope the ice/heat helps after a while and that you're up and about soon.

Those gloves are wonderful! The patio arrangement looks inviting. I know you'll be glad when you can more fully take advantage of it. "Patience and equanimity" are powerful words to remember.

Patience and Endurance. I am adding that to my brain today.

Well Rita, very sorry to see you in pain, good you did the x-ray checks for any broke bones (none, whew) but very sorry the x-ray positions made your knee area so very painful. Hope the ice/heat/rest for your knee and feet pain settles down more each day.

Cute gloves for a cute little gardener boy. So glad you have your wonderful family near by and that Leah and you share so many artistic activities. Your patio is now very inviting (neat hose too).

Thank goodness nothing was broken but I am sorry to hear you are having so much pain. I hope the medication and rest help and it improves soon. I hurt my knee a few weeks ago and I am finding it takes time more than anything else for it to improve. So yes, patience is important for us all and not always easy!

How wonderful that Leah and Ian could get your flowers and plant them for you! Such loving help and now you can enjoy watching them grow and flourish! Ian looks so cute with his new garden gloves!

Good thing it isn't broken, I have heard gout is painful not something I have ever had

I sure hope that all heals up quickly. It sure does look painful! Your flowers are so lovely, and I know it will help you to rest now for getting better sooner. Patience is the watchword, it seems. :-)

oh, gout. Husband has gout (feet and right hand knuckle on an old injury). He has a med they give him that keeps it from happening (but its preventative, not during), and straight cherry juice is really good for it too. If he's good about keeping up with both (and he's been slacking on cherry juice but meds seem to keep the other away even through chemo/radiation/other crap from cancer). Otherwise it always seems you just have to wait it out, and that sucks. Hope it goes away quickly. Love your flowers! Marigolds are favorites of mine for summer (daffodils for spring).

OUCH on the gout....hope you will heal up from it sooner than later. Looks painful. I've been having to implement patience and endurance these past weeks since my surgery.

Ian would have loved helping plant the patio. I know how you felt not being able to help. The end result looked lovely...well done to Leah and Ian!

Cherry juice and pills might help , my Dad gets gout frequently. Drink lots of fluids. Hope you feel better soon. Cute gloves that Ian has! :)

Oh Rita, I am sorry you are in so much pain. I have heard that gout is extremely painful because of little crystals in the joint. The patio looks beautiful and as always I think what a gem Leah is, and how lovely dear little Ian is. He's just at the most adorable age. Although I think I might have been saying that almost since he was born! I hope you are feeling better enough to water the plants by the next time you post.

Oh my...your left foot does look so painful. I hope it has gotten better. Sorry to hear you're knee too is causing problems. Your patio looks lovely. Leah and Ian did a nice job with all the flowers. The coleus is so colorful and cheerful!