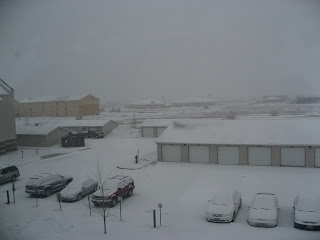 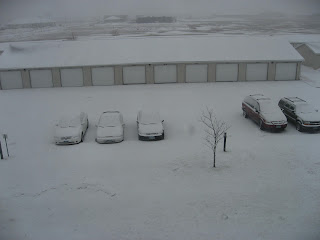 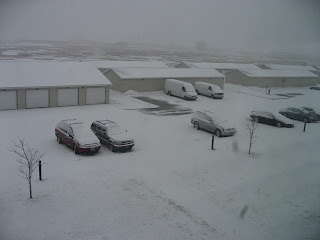 Spring obviously took off for the south for a while longer.  Winter can be such a pushy, dramatic sort.  I can't really blame her.  ;)
****
Here's a picture of Karma standing for Djan.  ;)  Yes, she does stand.  Mostly to get from one place to another--much like her roommate... 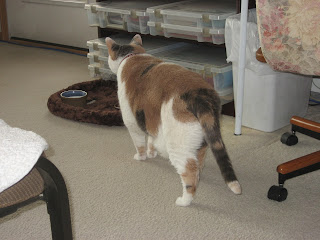 ...but the last few days, if you can believe it, Karma's actually been leaping in the air!!  When I went shopping with Dagan and Leah Monday night they had to make a stop over at the Natural Pet Store...and I couldn't resist this bug on a string toy that D&L said their cats are crazy over.  I didn't buy it with the stick because I already have several around here that I could attach the string and bug to. 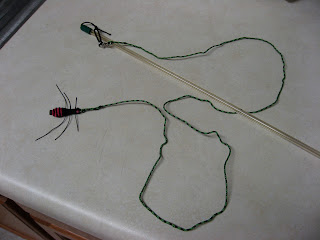 Sammy and Annie have a much longer green bug with more legs, but they were out of those.  So I got the black and red bug.  Karma LOVES it!!  I have to make sure she doesn't keep it for very long because when she catches it she immediately wants to bite the thin rubbery legs off--and I do believe that is the main attraction.  ;) 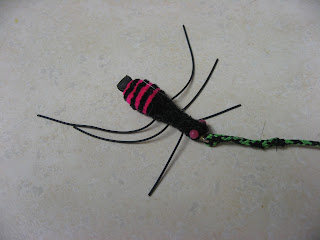 I called and asked the store to hold one of the green ones when they come back in.  Anything that can get Karma leaping in the air is definitely worth the money--ROFL!
****
Myself--I'll pass on the leaping.  ;)  After shopping and walking for 2 1/2 hours on Monday night--well, I have been in recovery since then.  Doesn't take much and I am totally shot.  Been sleeping 9 to almost 10 hours at night and could hardly move Tuesday--but it was soooo worth every minute!  I haven't been out shopping for such a long time.  Target even had new shopping carts--well, new to me.  Leah said they've had them for at least a couple of years.  We couldn't remember the last time I'd been to Target...2 years...maybe 3??  I get to Tochi's around once every year or so, but that is a small store with much less walking.  My back held up surprisingly well--so the new recliner has truly been working its magic!  I am all stocked up again on Charmin, Puffs, and all those dry good essentials--and got to spend time out and about with D&L.  :)
****
The rest of my Amazon order arrived.  Some cotton twine and Martha Stewart stencils. 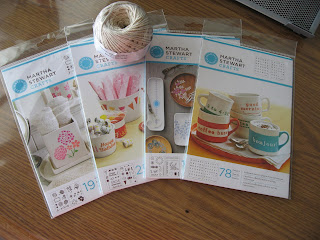 These are small stencils that can stick to glass or smooth surfaces. 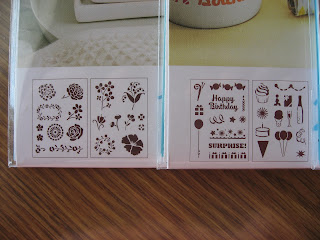 But I think I will be able to use them for cards and mixed media...even if I have to tape them down along the edges. 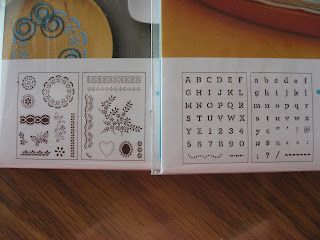 Oh, and after we were done shopping D&L came up and Leah drilled the holes for me in the davy board covers! 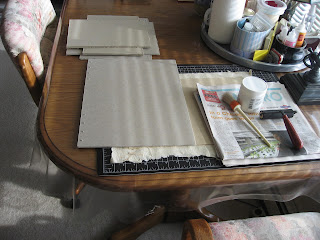 I'm trying some of them with a different pattern. 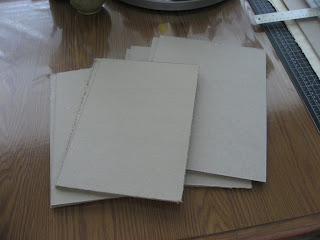 Now I have to sand down the holes and around all the edges of the smaller ones.  You can see how ragged they look in a lot of places. 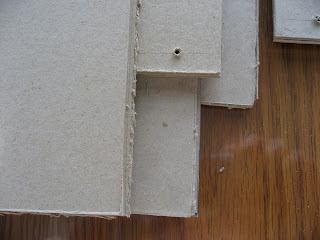 Davy board doesn't come with nice clean edges in the first place--at least not the davy board I purchased.  It is hard to cut it cleanly.  Even though it will be covered with paper, I just can't leave it like that--have to sand it down and smooth it out.  I was hoping I'd be up to that by now, but I am still quite sore from shopping and now I already need to try to get to the license bureau again tomorrow...so I am not going to push my luck.  I'll wait.  I hope we don't have this kind of weather tomorrow afternoon.  I really should watch the news once in a while--LOL!
****
Caroline came yesterday.  She's switching over to Tuesdays next time because of changes at work.  She got another position part-time (same company--promotion!) but is keeping some of her clients--including me!  I'm so glad!  She's been coming here for around seven years, I think.  I am so happy for her taking another step up the ladder, as they say.  :)
****
I have both Life of Pi and Hitchcock coming from Netflix tomorrow, so you know what I'll be watching this weekend.  I read Life of Pi several years ago and cannot imagine how they could bring this story to the screen, so I am anxious to see it.  (Maybe it's a good thing I read it long enough ago that I won't remember all the details--LOL!)
****
From the wintery wonderland of Fargo...have a marvelous day!!
****
"The way is not in the sky.  The way is in the heart."
Buddha
Posted by Rita at 12:39 PM