Good Tuesday Morning!
At least I started this when it was still morning--LOL!  I had begun this post much earlier--showing my coffee mug for T Stands For Tuesday and that I had been working on getting Christmas cards ready to mail since we last spoke--but FedEx arrived and I got sidetracked--LOL!  (There are some pictures toward the end.) 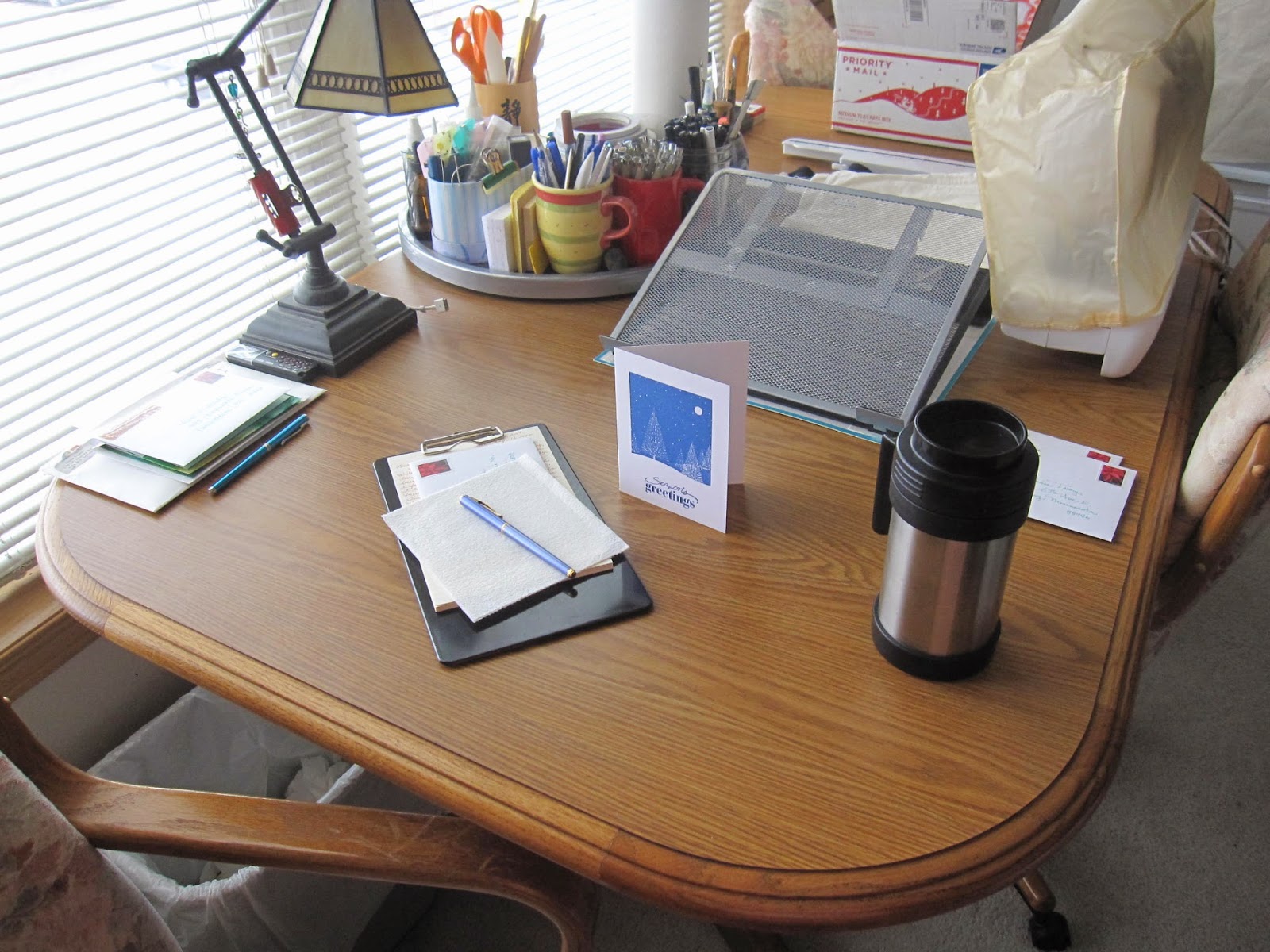 Anyways, our Christmas cards this year are super simple. 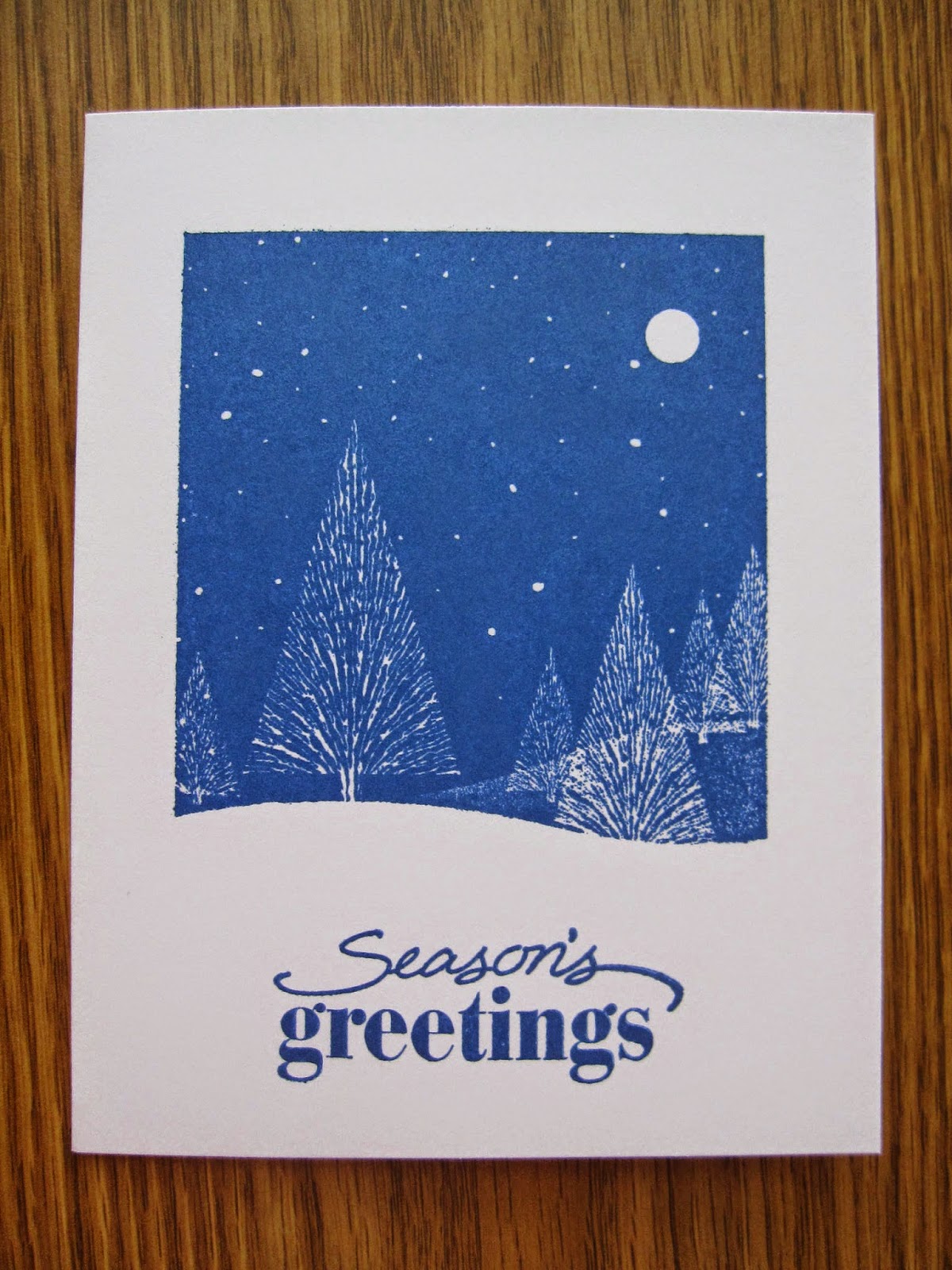 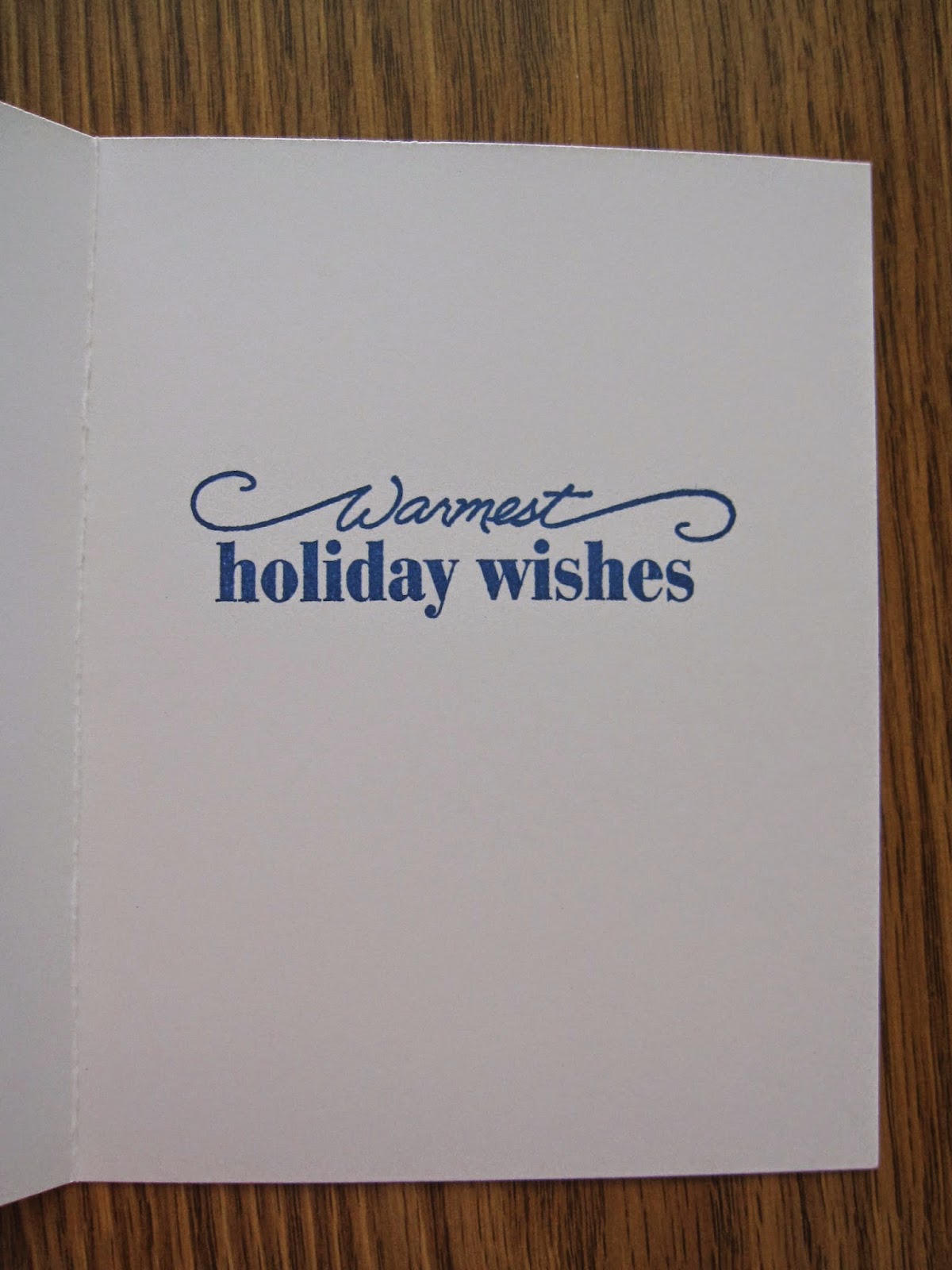 You may remember I bought four different scenery stamps for simple cards like this.  We just love them and will be doing sets of the other three scenery stamps this winter to keep as handy back ups if we get too busy to make any other Christmas cards.
****
I got them all finished this weekend so that the last ones went out in the mail Monday.  Earlier than some years--LOL!
****
It's been cold.  Karma is usually either on "her" ottoman... 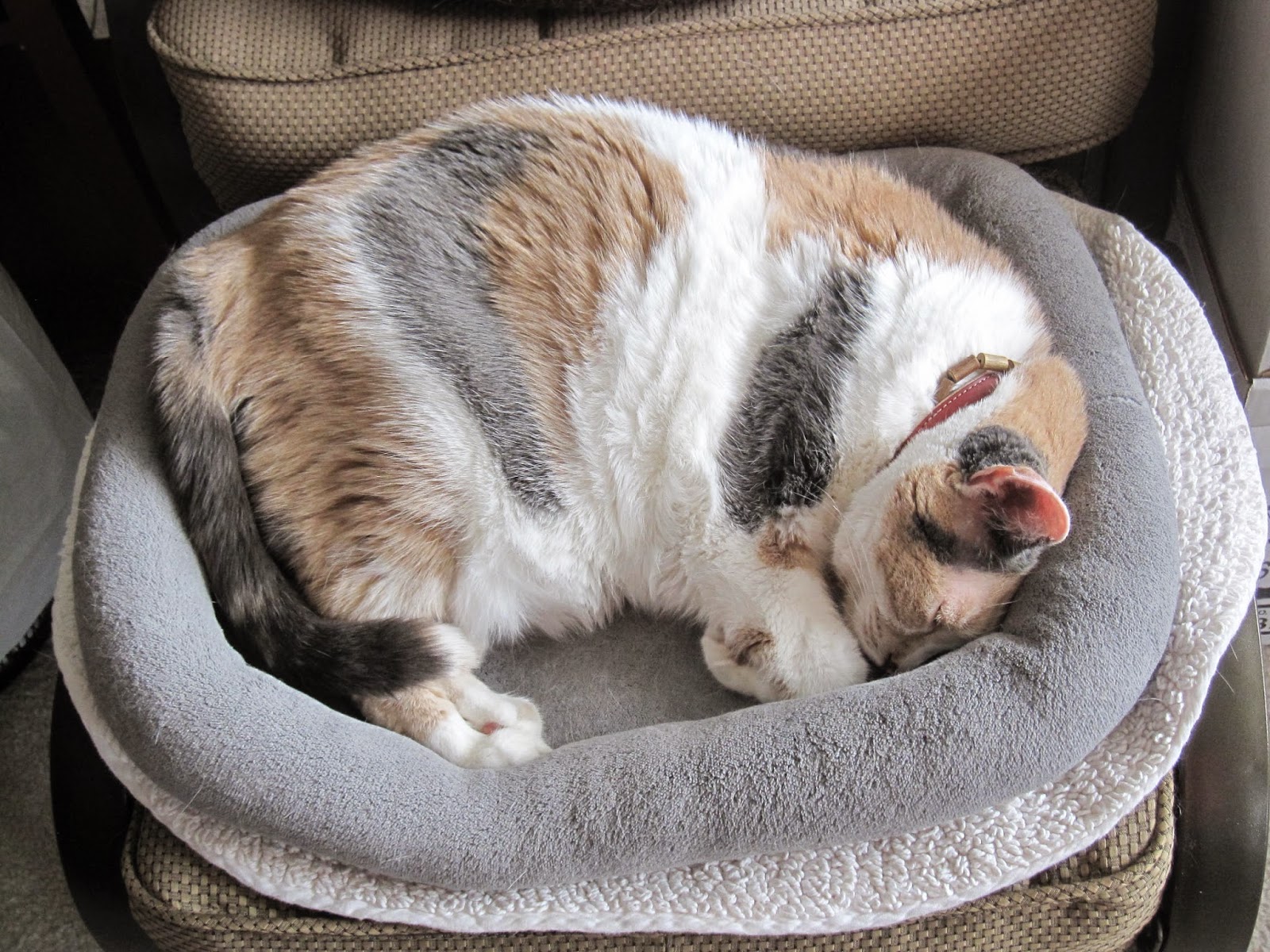 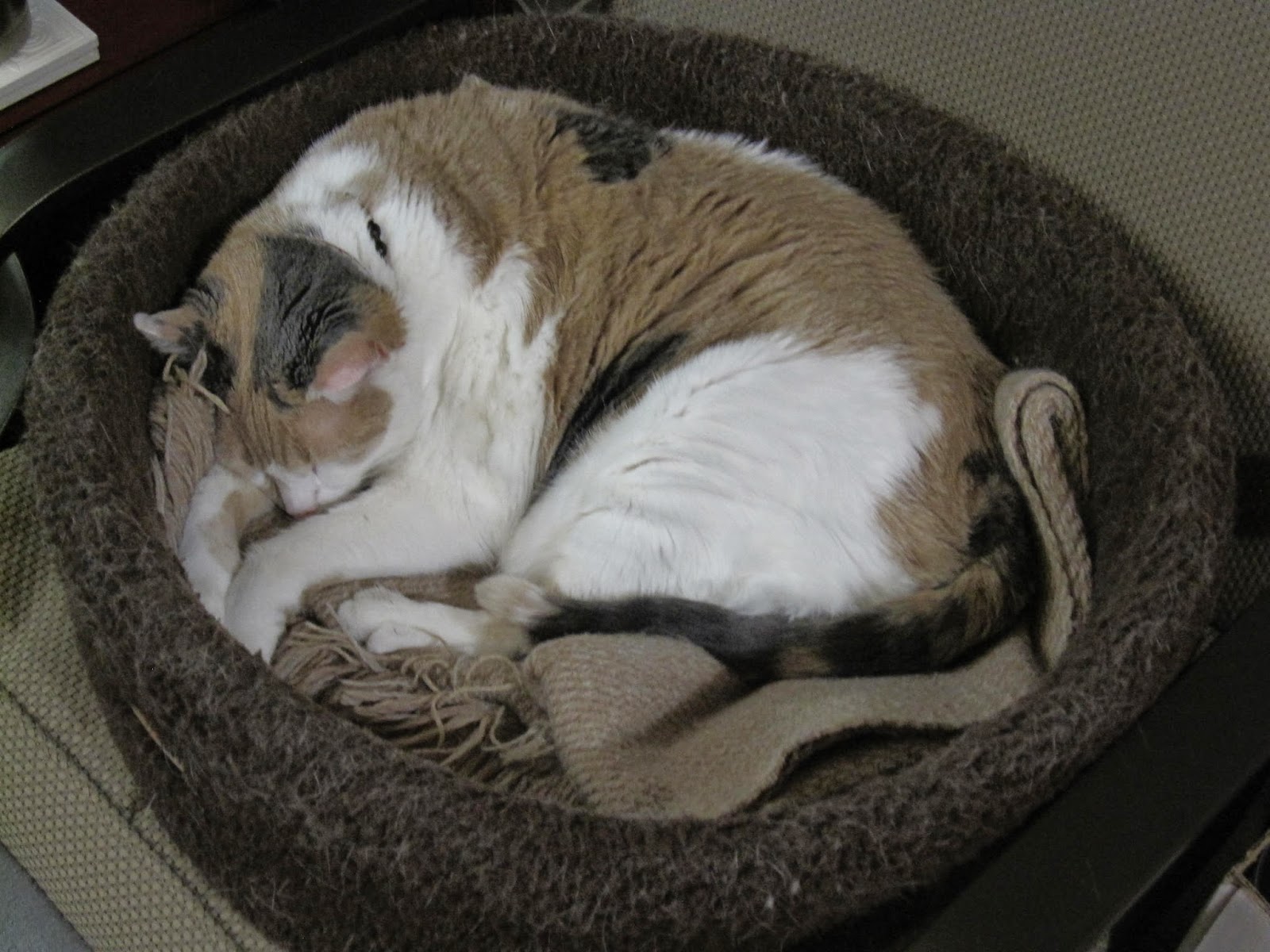 Okay--as I said, FedEx arrived this morning--with some more RED for my apartment facelift!  These have been my bathroom rugs since 1990.  Since I plan to throw them away...well, I decided to stick them out on the porch just to see what Karma would do. 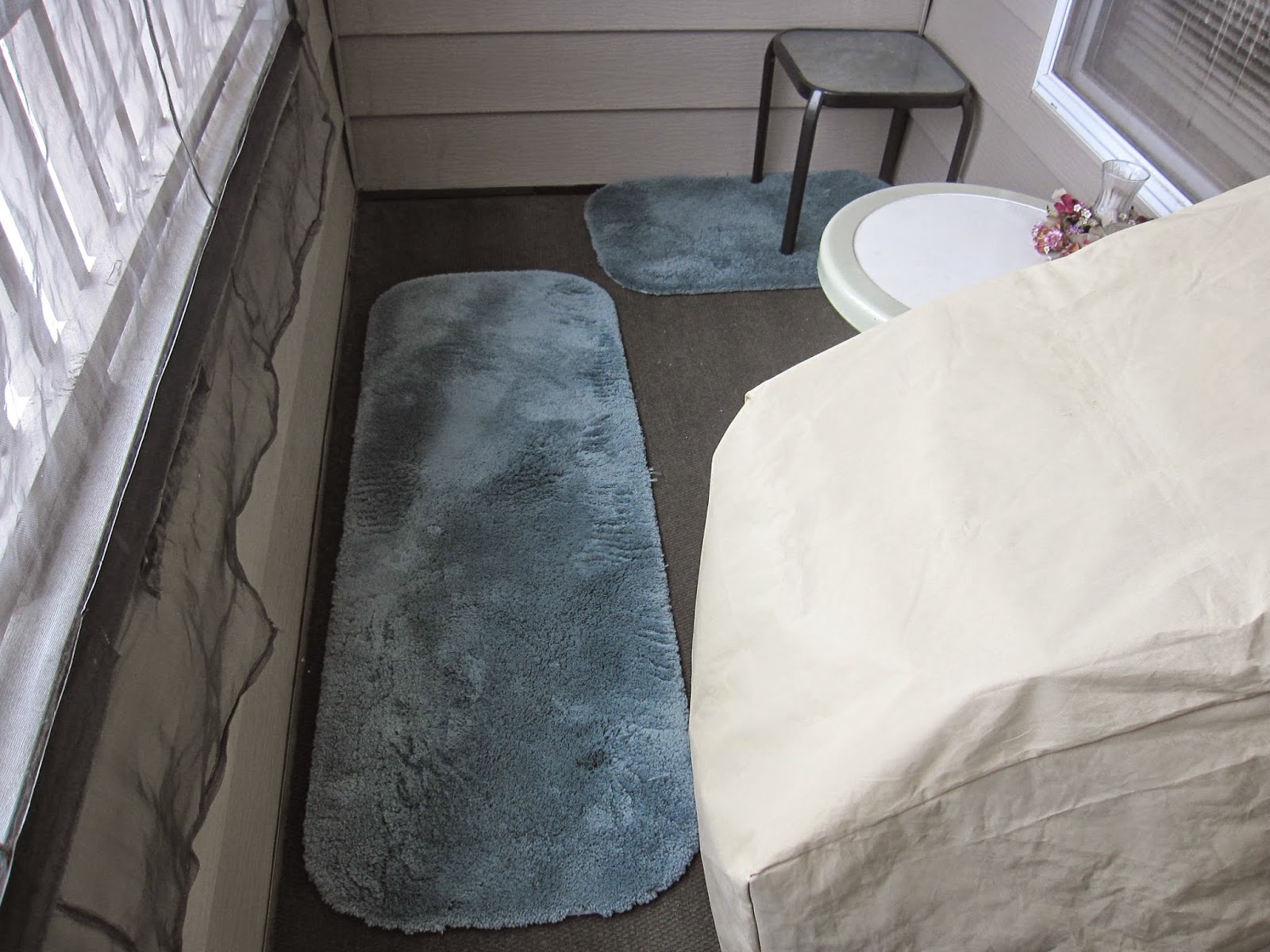 Karma just slays me!  She has walked on them and even taken naps on them all these years, right?  But put them out on the porch and she was afraid to step on them--scared of them--LOL!  She was trying to walk on that narrow strip to the left of the long rug--ROFL!
****
But she loves the new squishy-soft deep-red rugs.  So do I!! 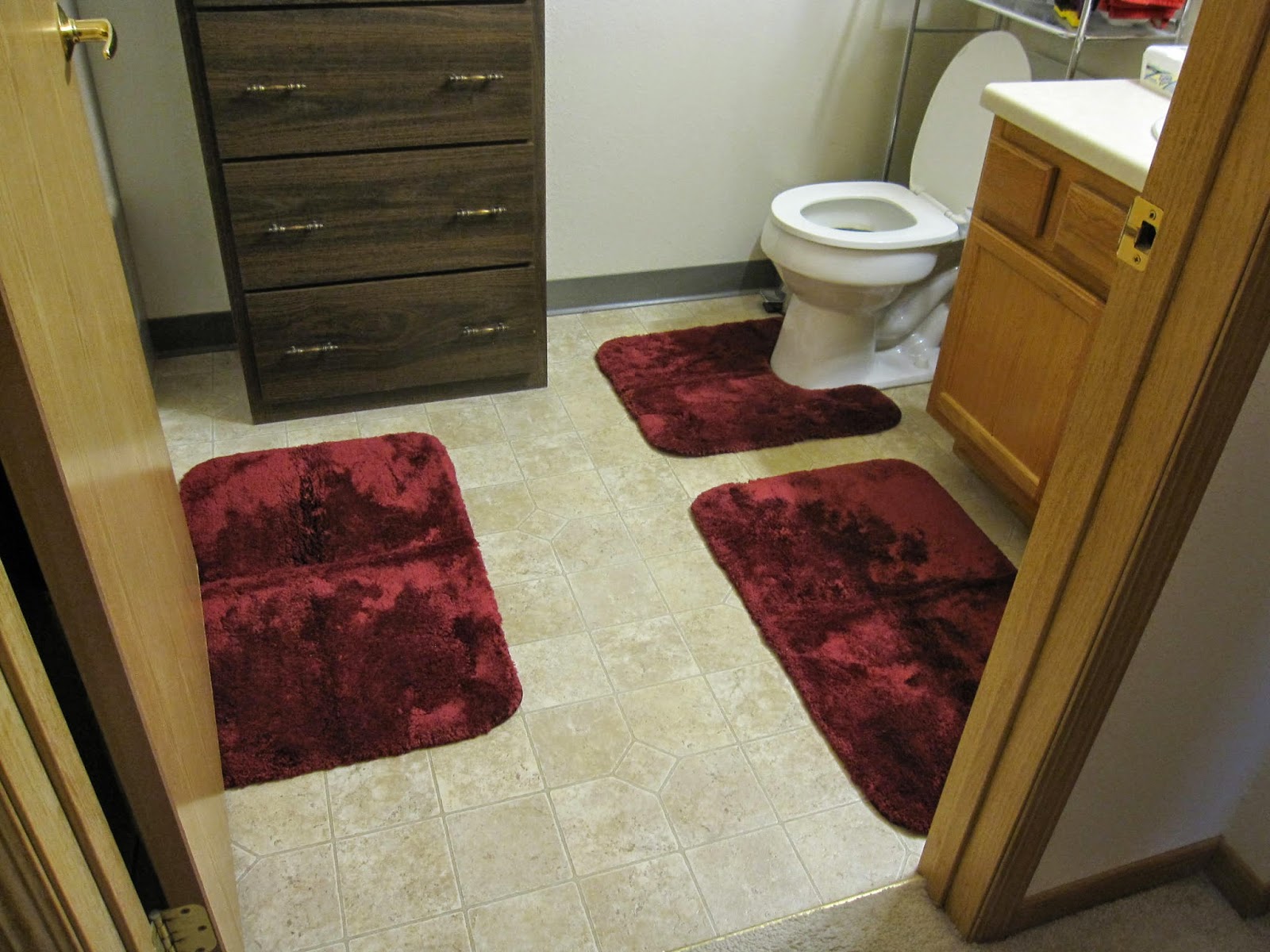 This is the entryway rug.  The last one of three that still has rubber backing on it and doesn't slip out from under me.  There was a slippery one in the kitchen--which will now head for the dumpster, also. 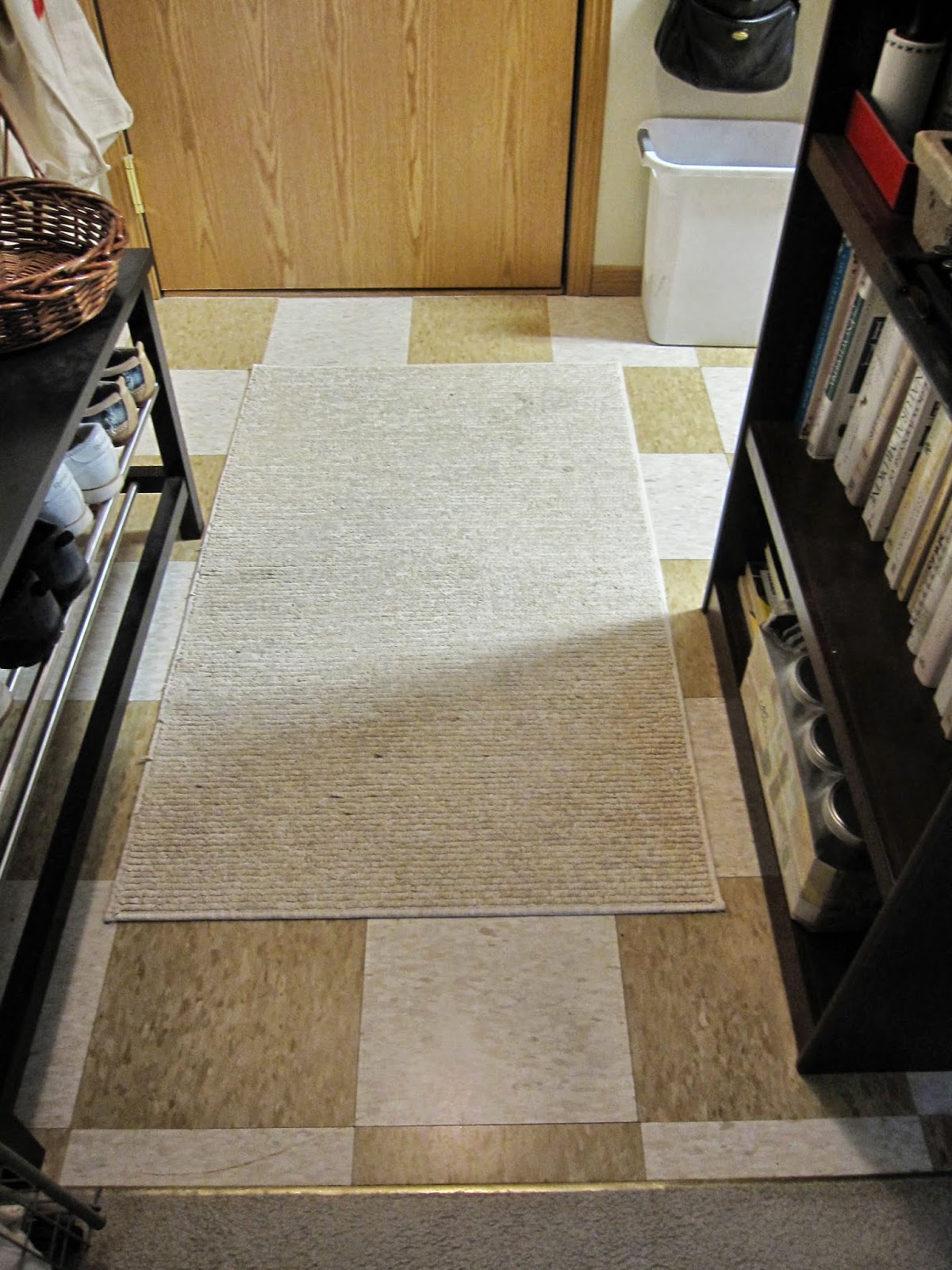 Here are two little red berber rugs that (hopefully) won't slip around...and Karma loves these, too.  She doesn't know where to sprawl--LOL! 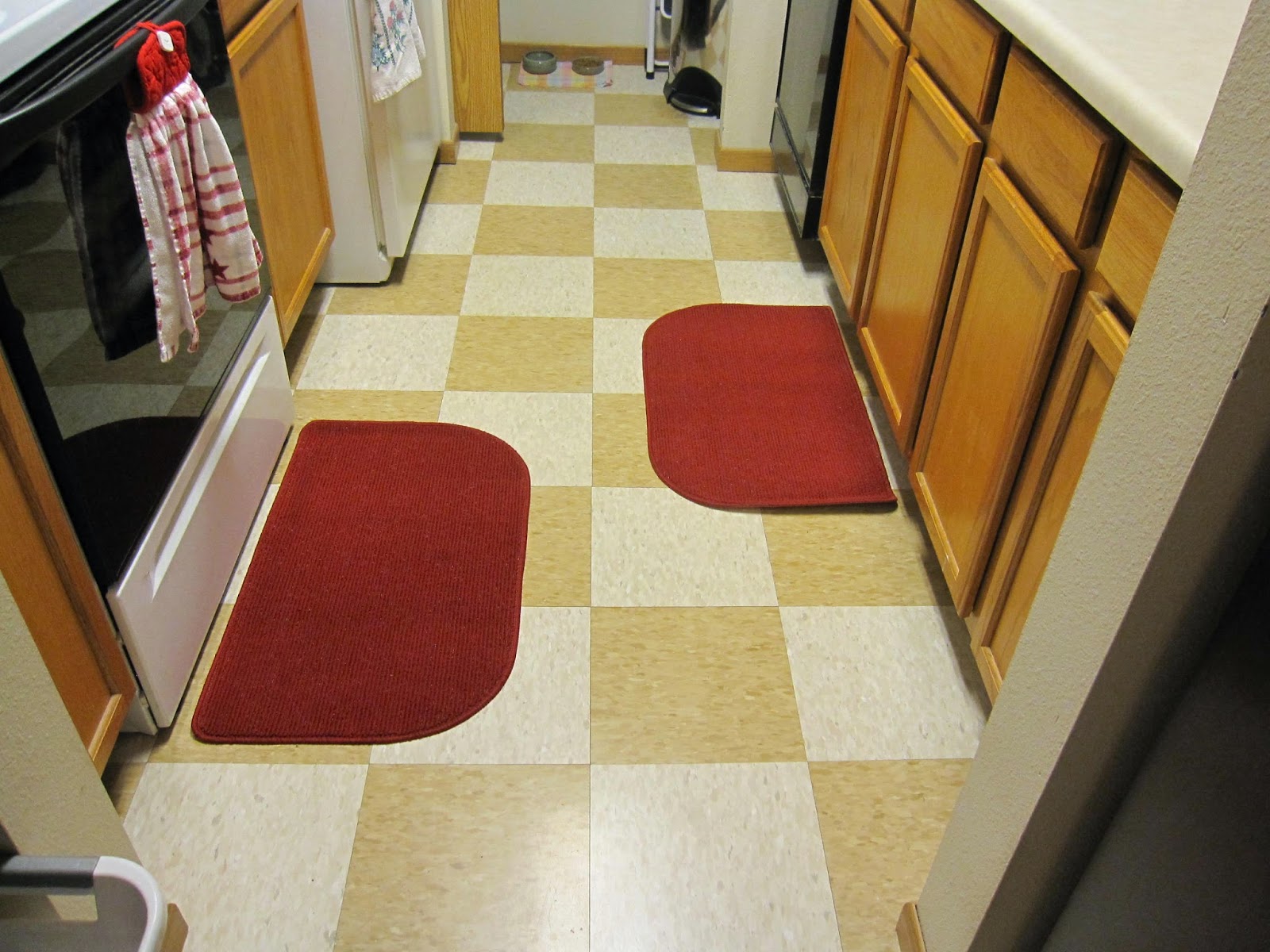 The red towels and dishcloths and shower curtain are already in the washer.  Too excited to remember to take pictures first.  What fun!  Like a party over here!  ;)
****
I'll close today with some pictures Leah took of our happy Ian.  These are all taken on Mom and Dad's soft comforter on their bed. 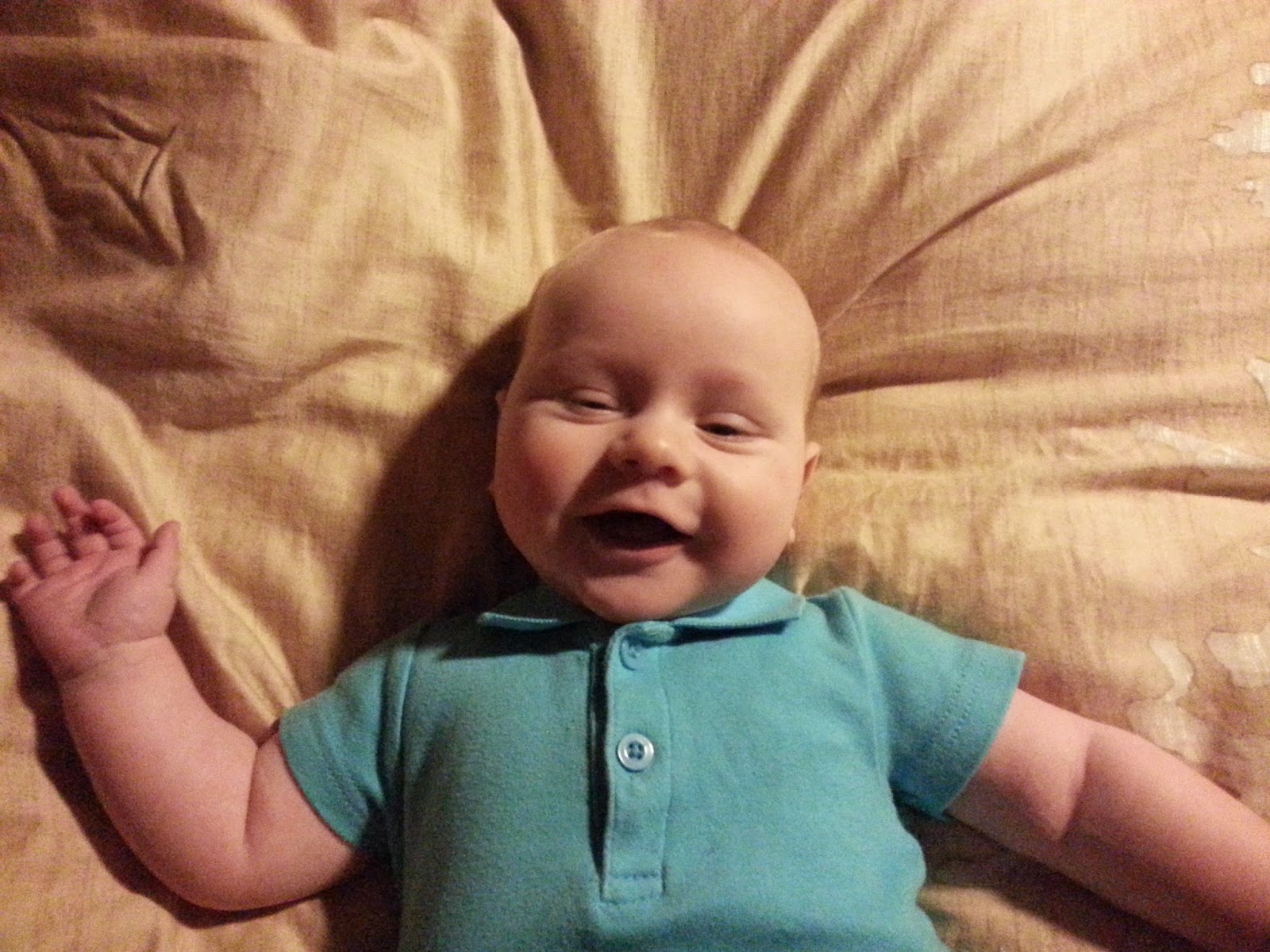 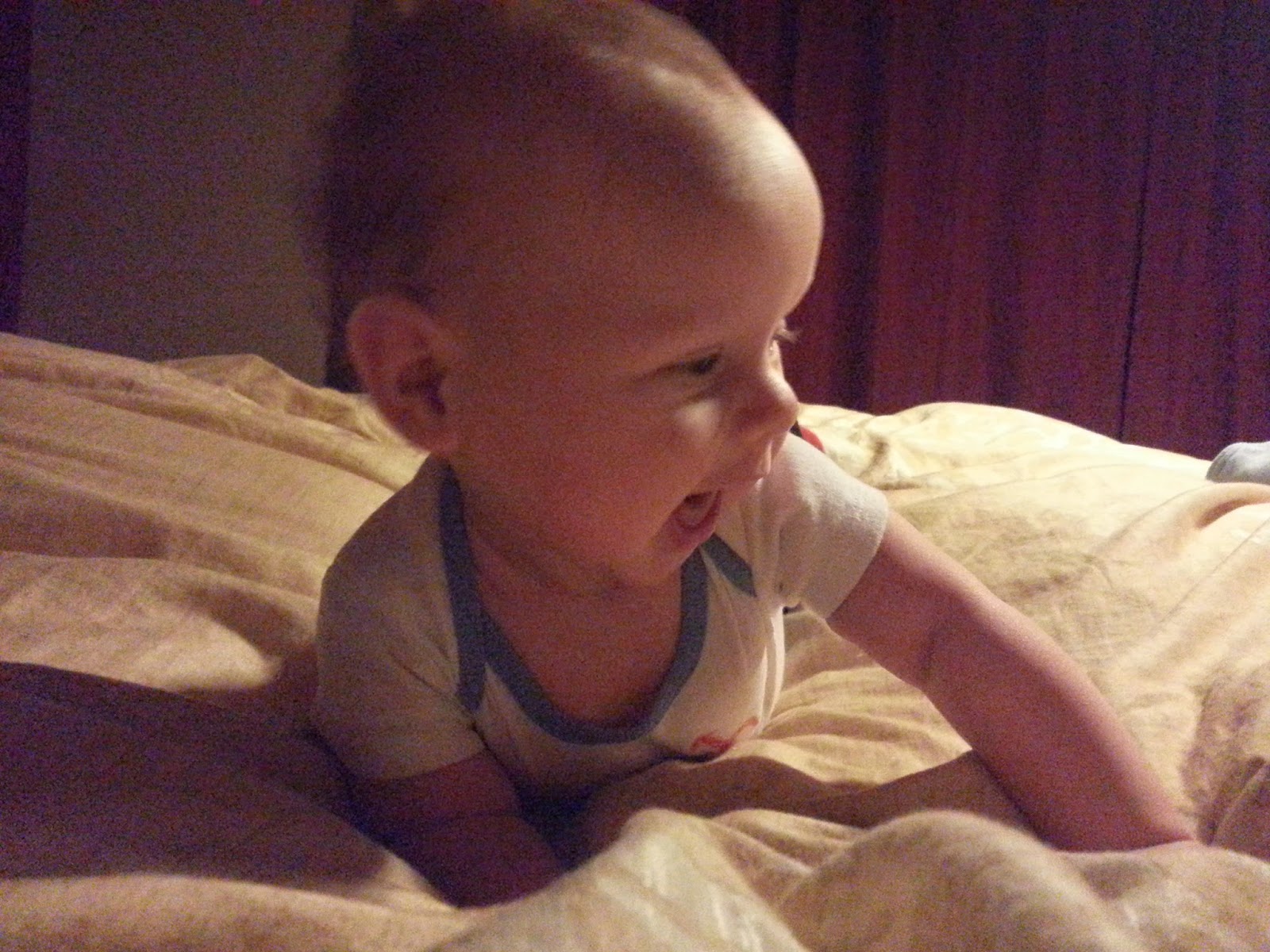 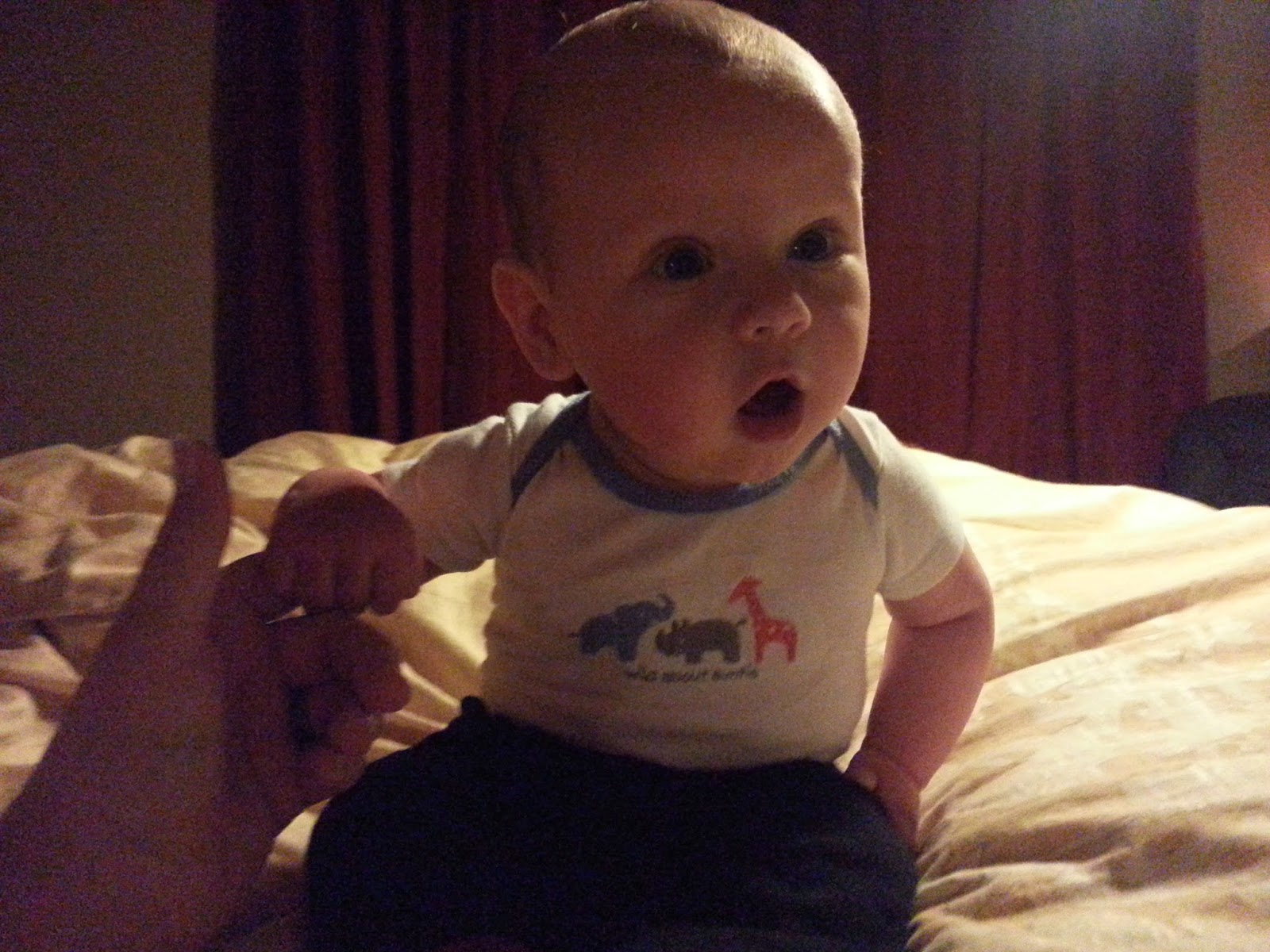 I swear that most of the time when Ian is on his back he has those legs in the air--even when he's not laughing or squealing. 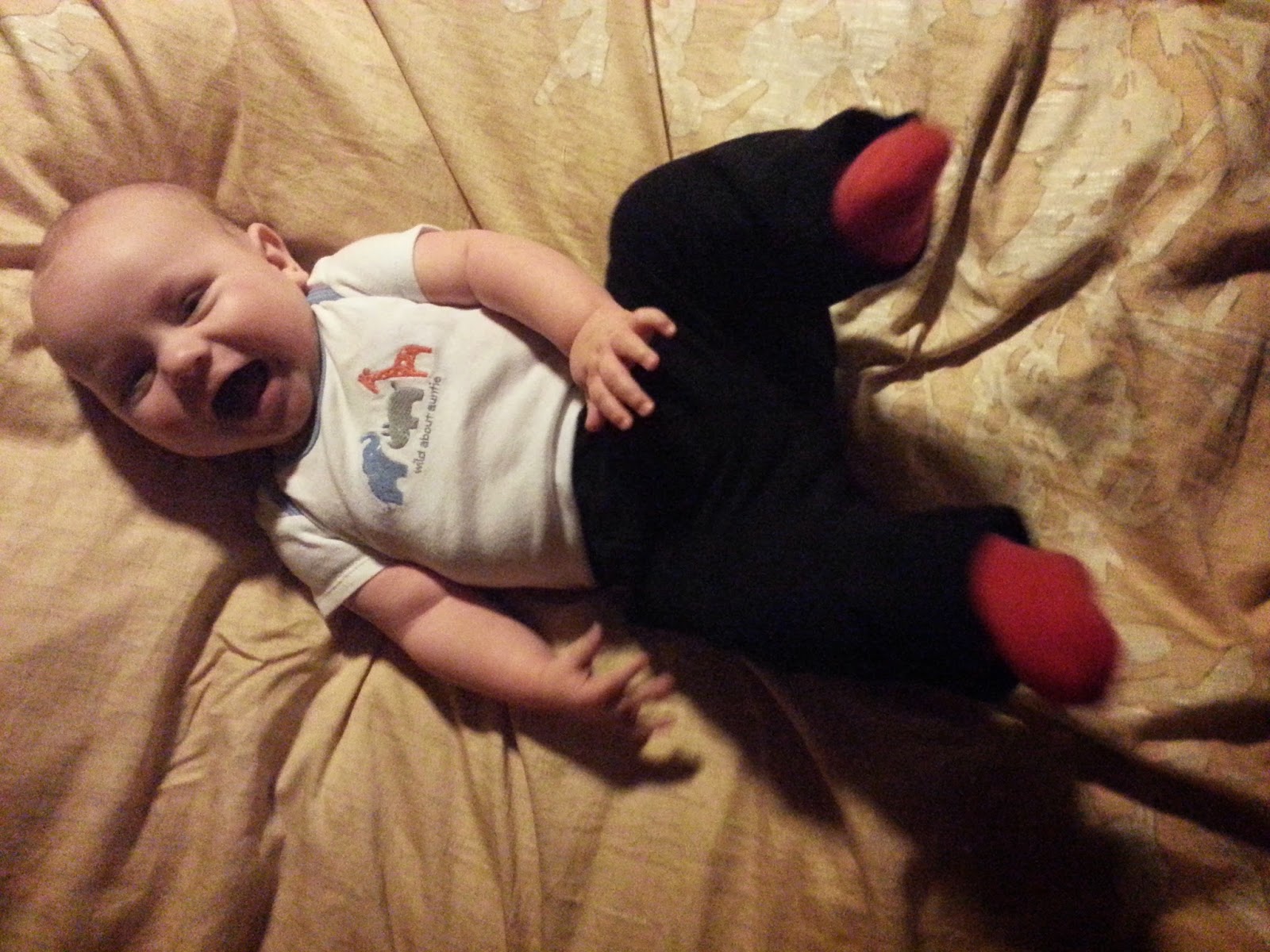 I won't see Ian till this weekend, probably.  Leah's Grandpa died (not unexpectedly) and they are off to the funeral tomorrow.  Leah's brother Aaron is on leave this month from the service and staying with McFamily so he is even home to pay his respects and be a pall bearer.  Next I see them they will probably be coming over here to switch furniture around for me.
****
Oh, just a funny thing.  After google stole all those emails from blog posts and slapped them in spam...now I am getting an email for Pakistani Clothes and Fashion every single day.  I make it "Spam" and yet every single day I get another email.  I find that very amusing.  When I want spam to work... LOL!
****
We are supposed to warm up to above freezing later this week...for several days maybe!  Which means what tiny bit of snow we have will be gone.  I sure don't want a brown Christmas.  Isn't that the way it goes?  Other people have had so much snow they don't know what to do with it.  Crazy weather.  Anyways, have a great week!!  :):)
****
"Laughter is carbonated holiness."
Anne Lamott
****
Note: if you see the prove you're not a robot box when you go to comment you can try hitting publish without filling in the box and it will usually work regardless.  I double-checked and I have definitely got no word verification checked--grrr!  So please--try just ignoring it.  That has worked for me on other blogs.  Google has been adding this without permission to a LOT of blogs.  If anyone knows how to get rid of it, please let me know.
Posted by Rita at 12:10 PM