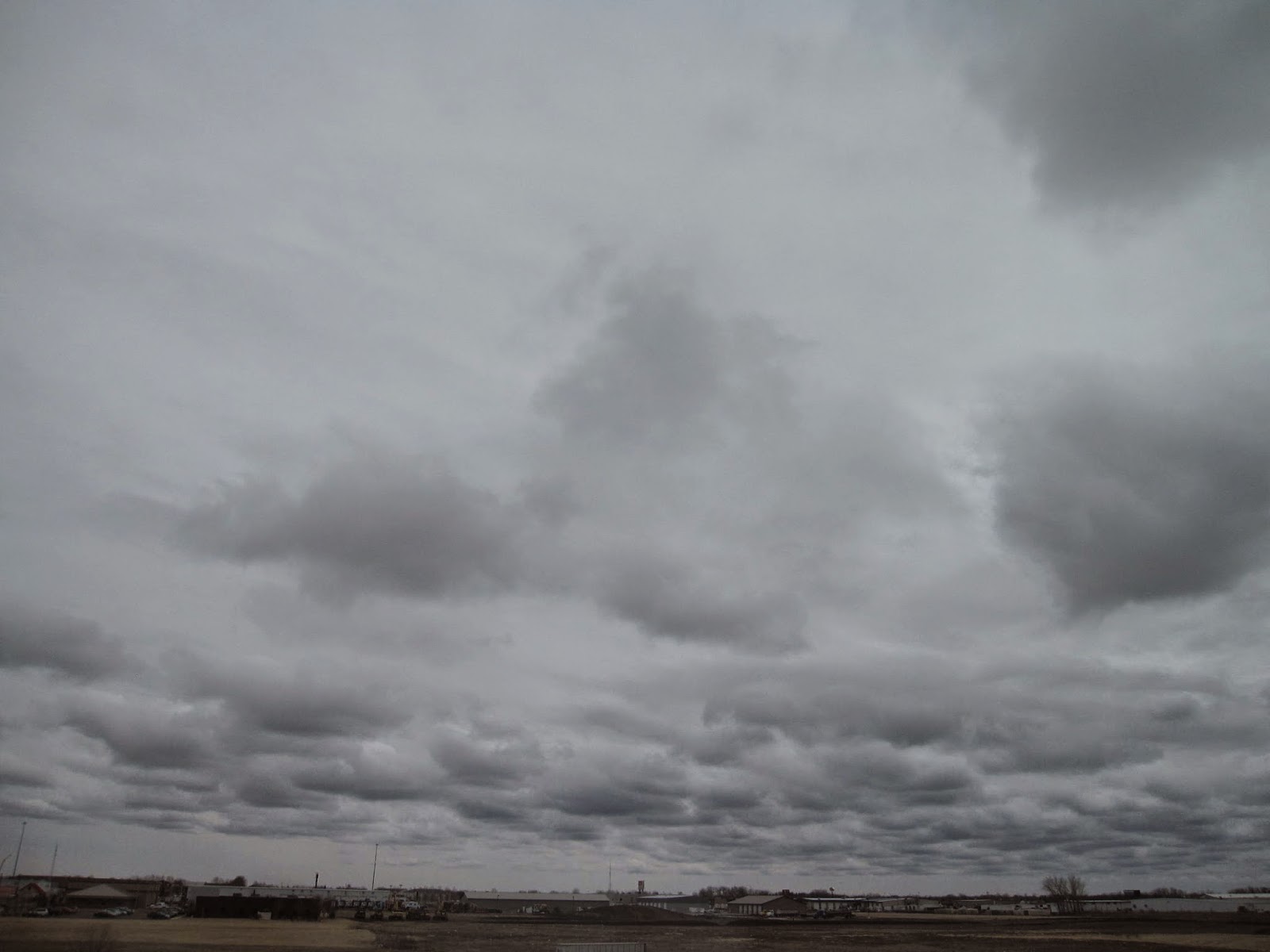 It's 32F (says it feels like 19), dark, damp, very windy, and looks like it rained during the night a little. 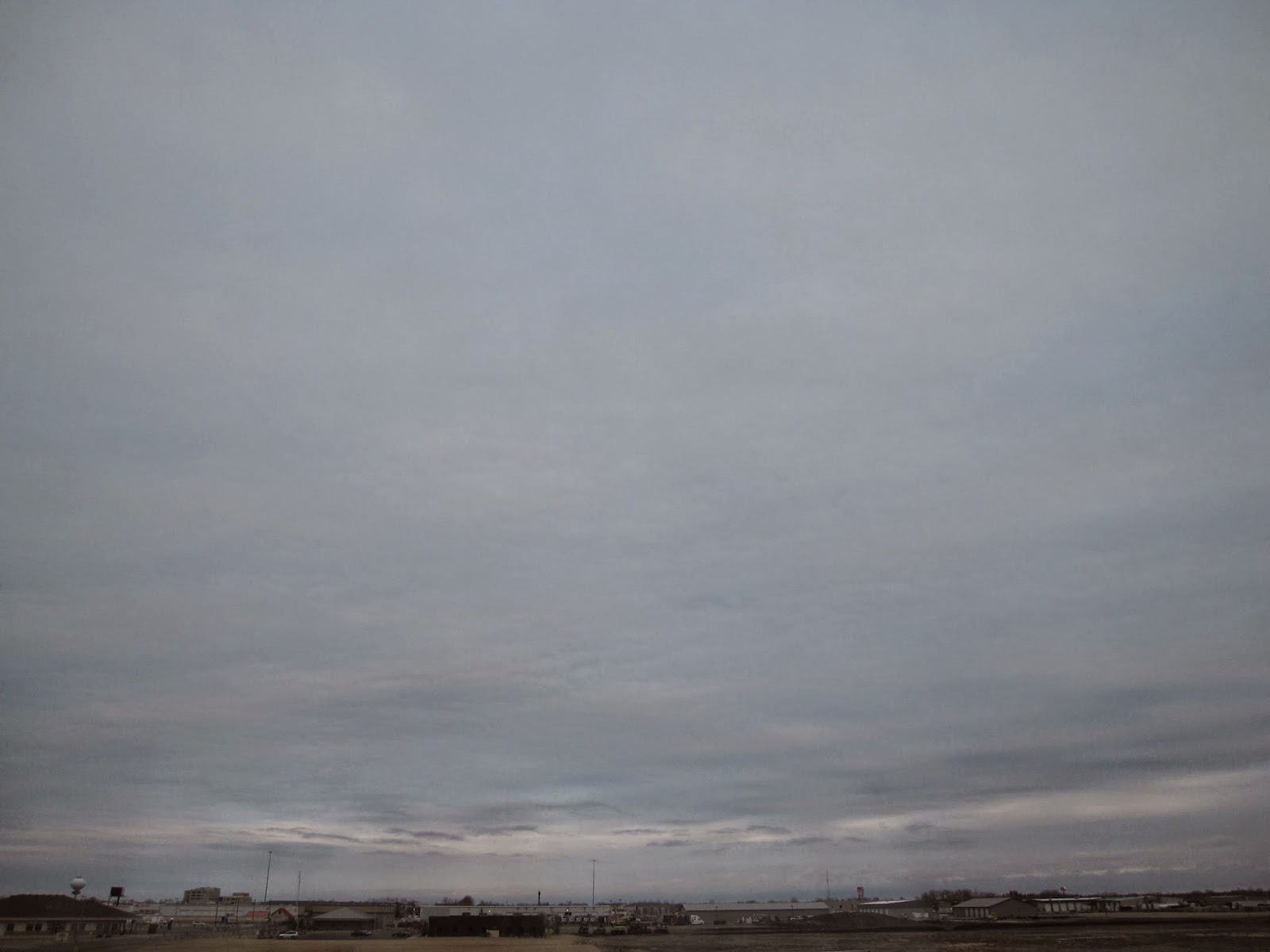 The wind has been pounding against the building and rattling the windows all night.  But I finally slept long and better (10 hours!).  Been sick since last Thursday.  Of course, I wasn't sure I was sick-sick until Saturday--LOL!  I finally realized I seem to have caught some kind of stomach flu bug (possibly combined with spring allergies) because it got so much worse than my normal bad days stuff.  ;)  Started feeling quite a bit better yesterday--for part of the day--and am hopeful for today.  Was bound to pick up something, I suppose.  I have been lucky all winter with all the crud being passed around.
****
Meanwhile...I had a big flat box arrive last week (maybe with stomach bug germs on it--LOL!--you never think of packages and mail). 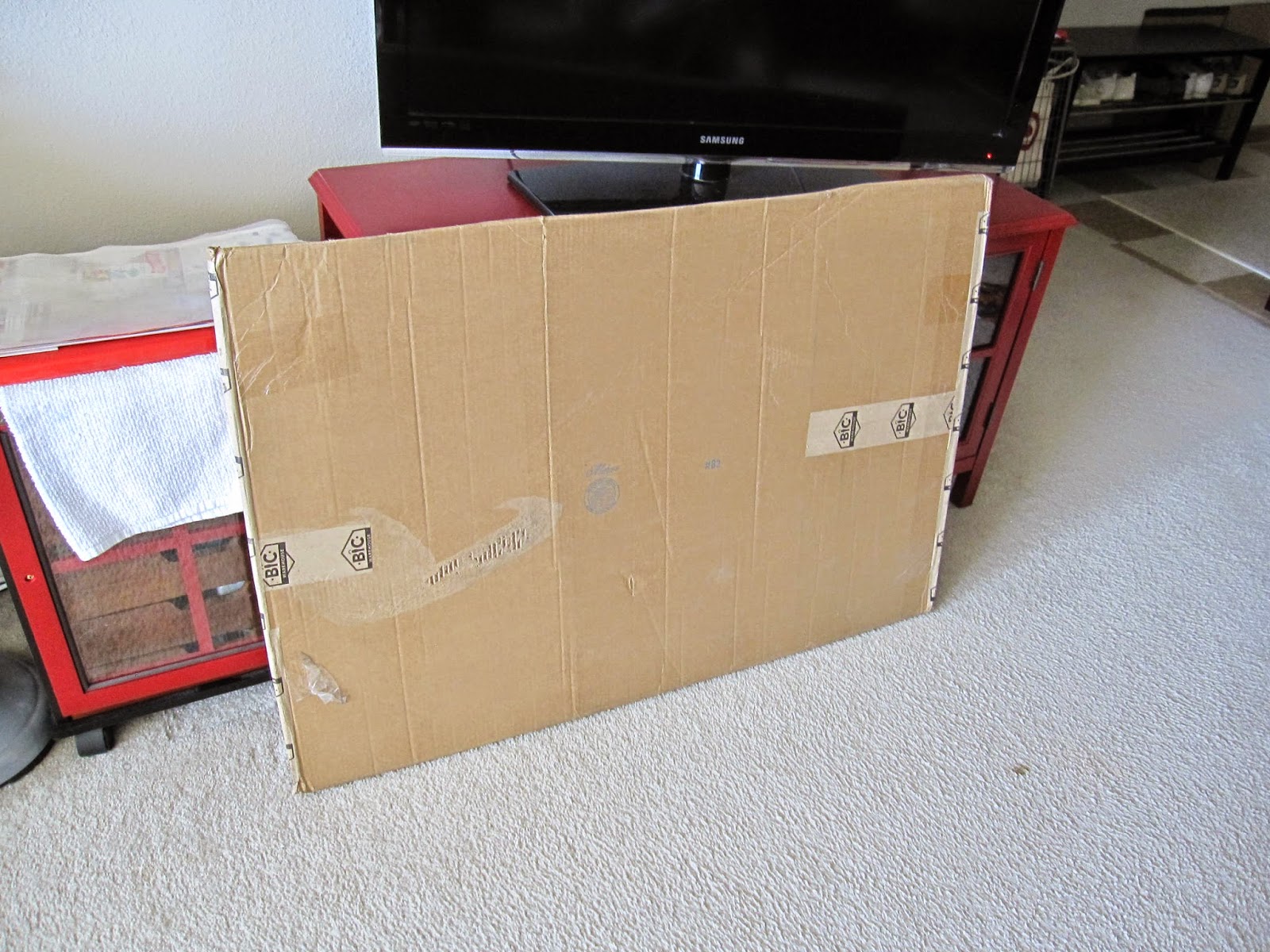 Here's the new large red cutting mat on the table.  It's orange on the other side, too.  Quite flashy...and good for sewing and bookbinding projects. 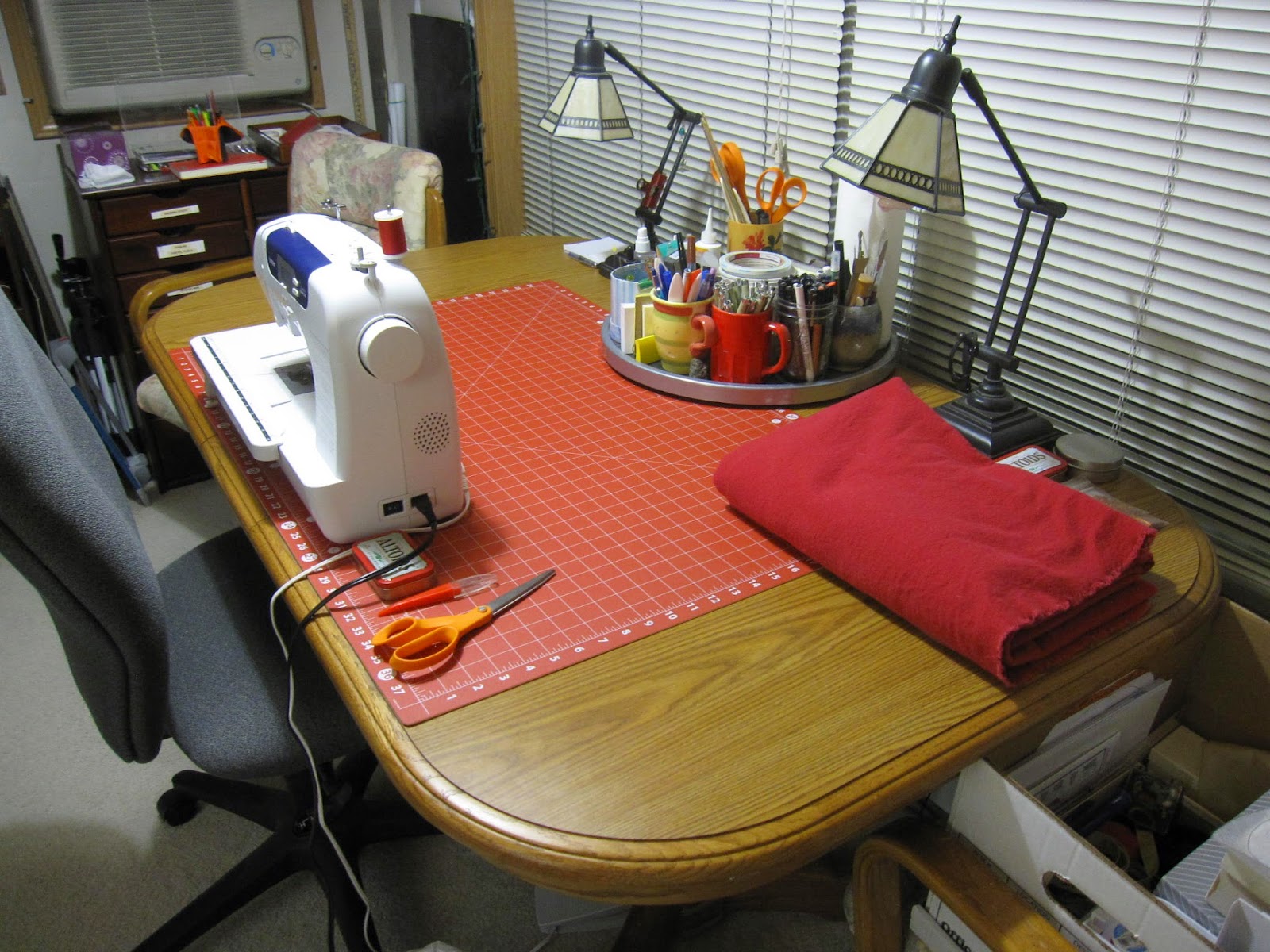 Dagan dropped off that additional red flannel Leah picked up because Leah and Ian had caught colds...and later Dagan caught it.  But I think mine was different, either that or combined with something else, as they were only running from one end--ROFL!
****
I also got a large acrylic block so I can stick the smallest gelli plate (3" X 5") on it--like you see here--and use it like a stamp. 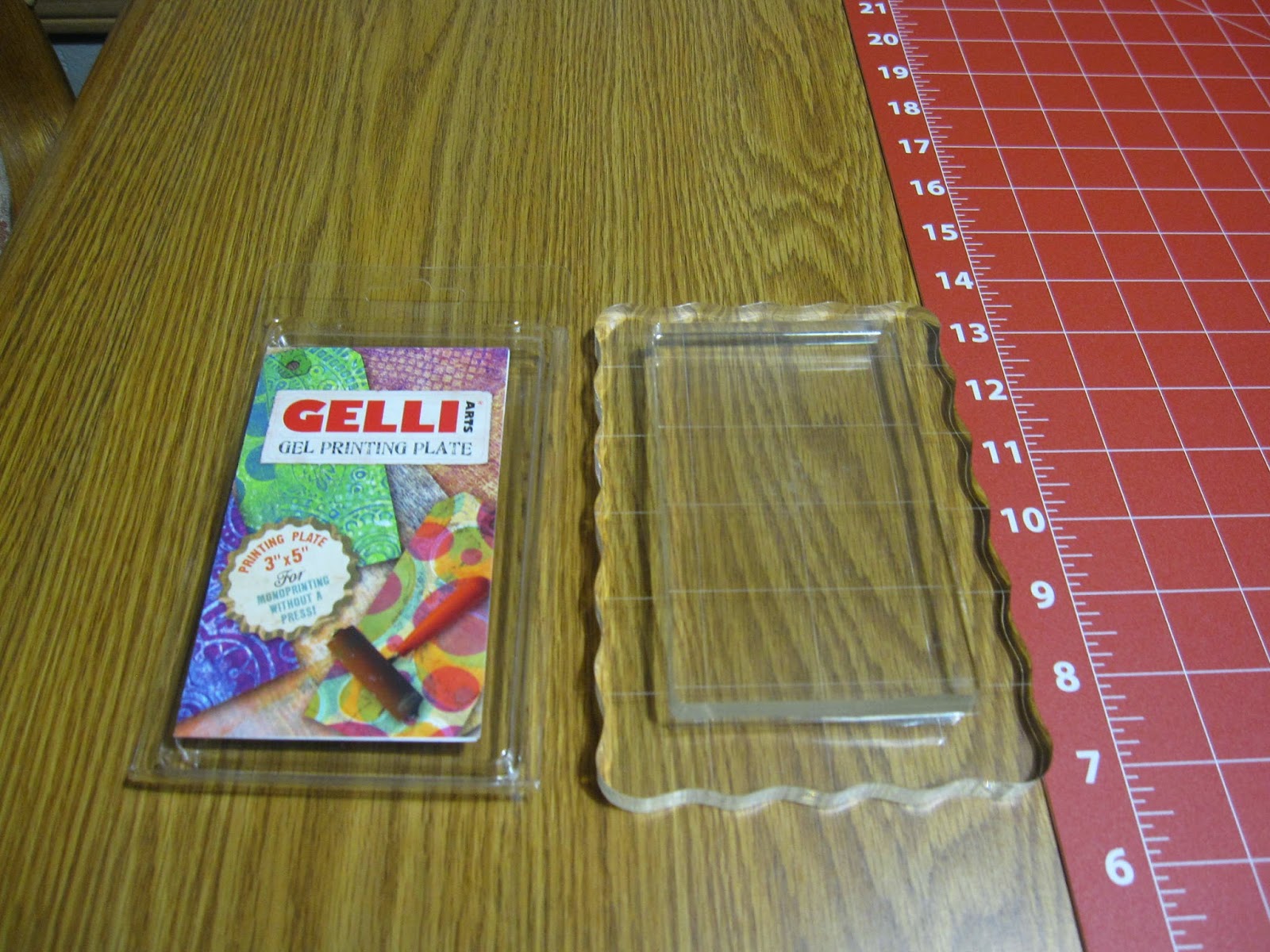 Before I got too sick, I was cutting and cutting fabric.  This is the stack of the backside of the pad flannels paired off with the waterproof (PUL) fabrics. 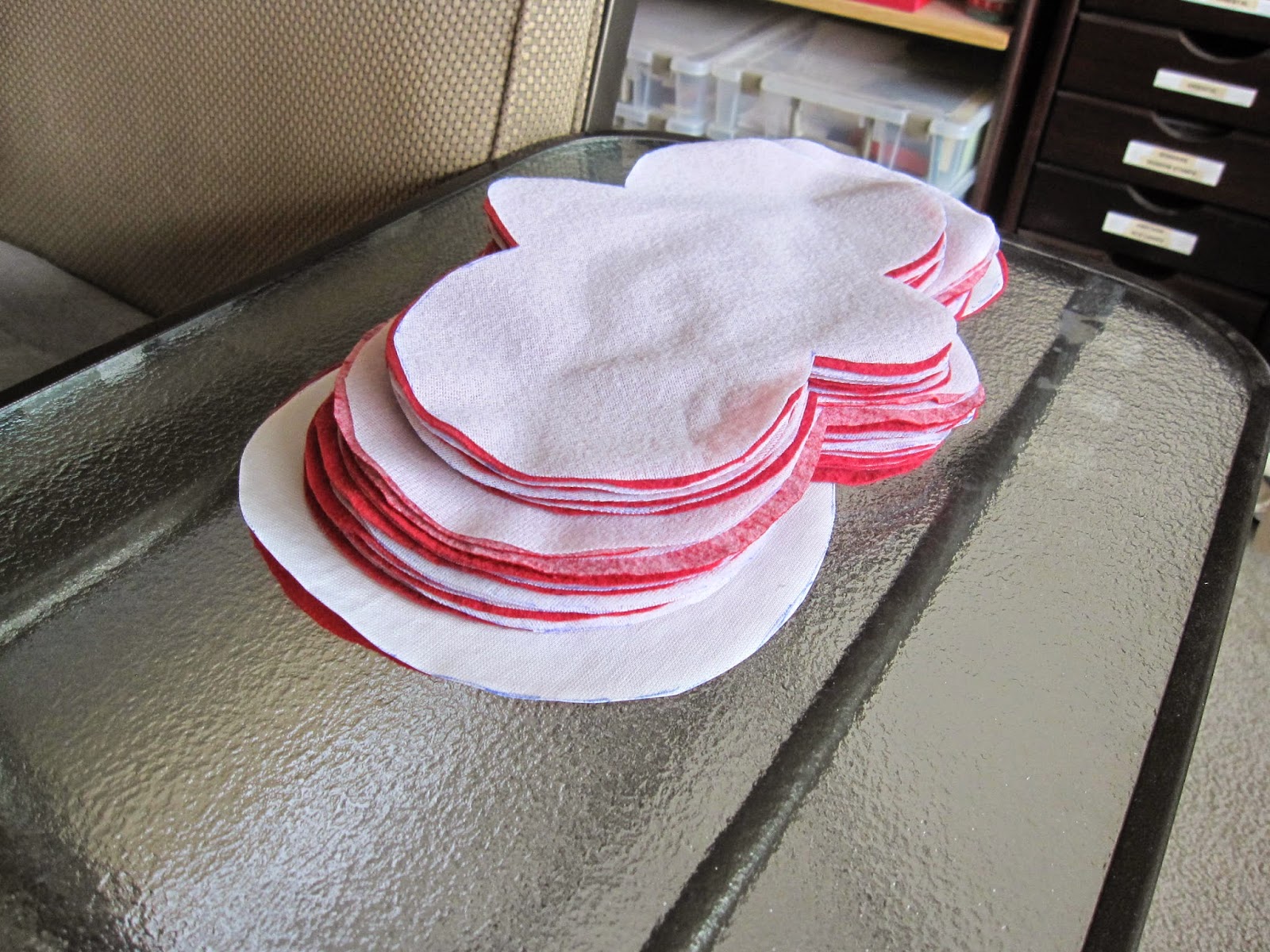 This is the stack of tops with the core (zorb) fabrics pinned on and ready to sew. 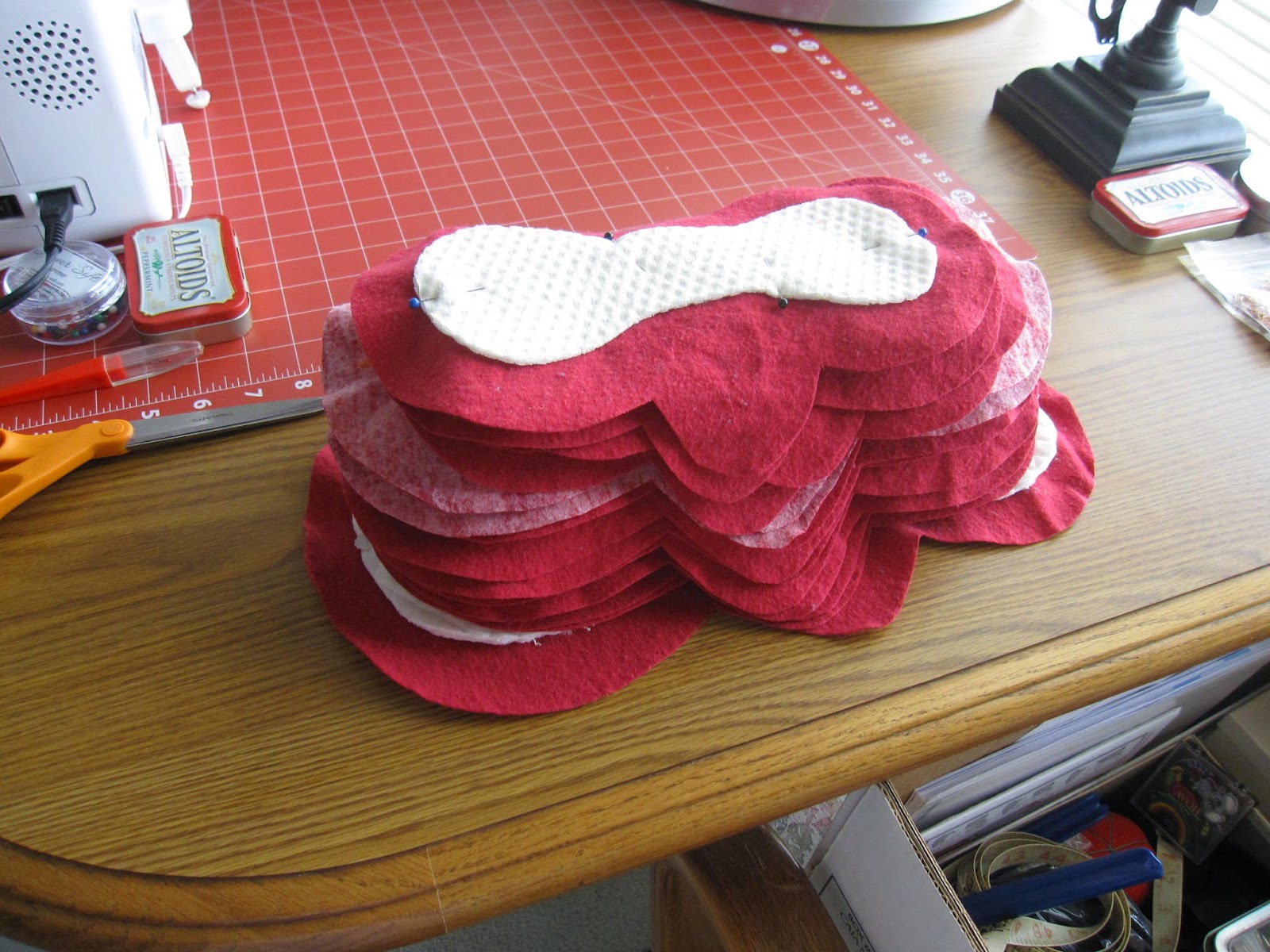 That's as far as I got before I had to take a sick break.
****
I did putter for a couple days on this project, though.  Something I could do while blowing my nose or drop easily to run to the commode.  ;)  I wondered if I even had a shot of a cup of coffee for T Stands For Tuesday...well, there it is.  :):) 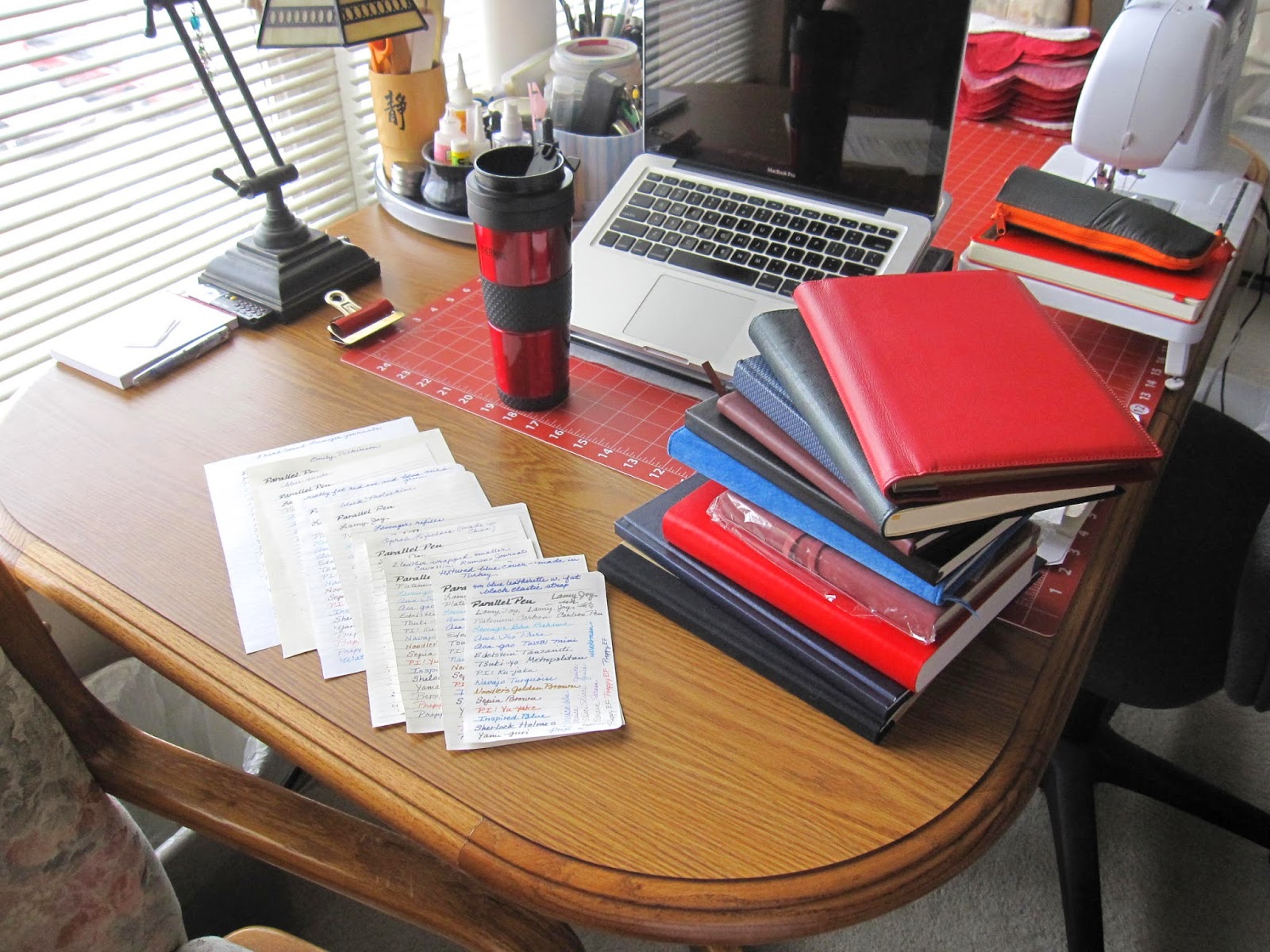 Anyways, I am down to the last page in my daily journal today--the turquoise QuoVadis has been my current one.  I have part of a drawer filled with journals that have remained untouched for years and years.  I'd already tested a few of them (and they weren't good for fountain pens) and decided to test the rest of them. 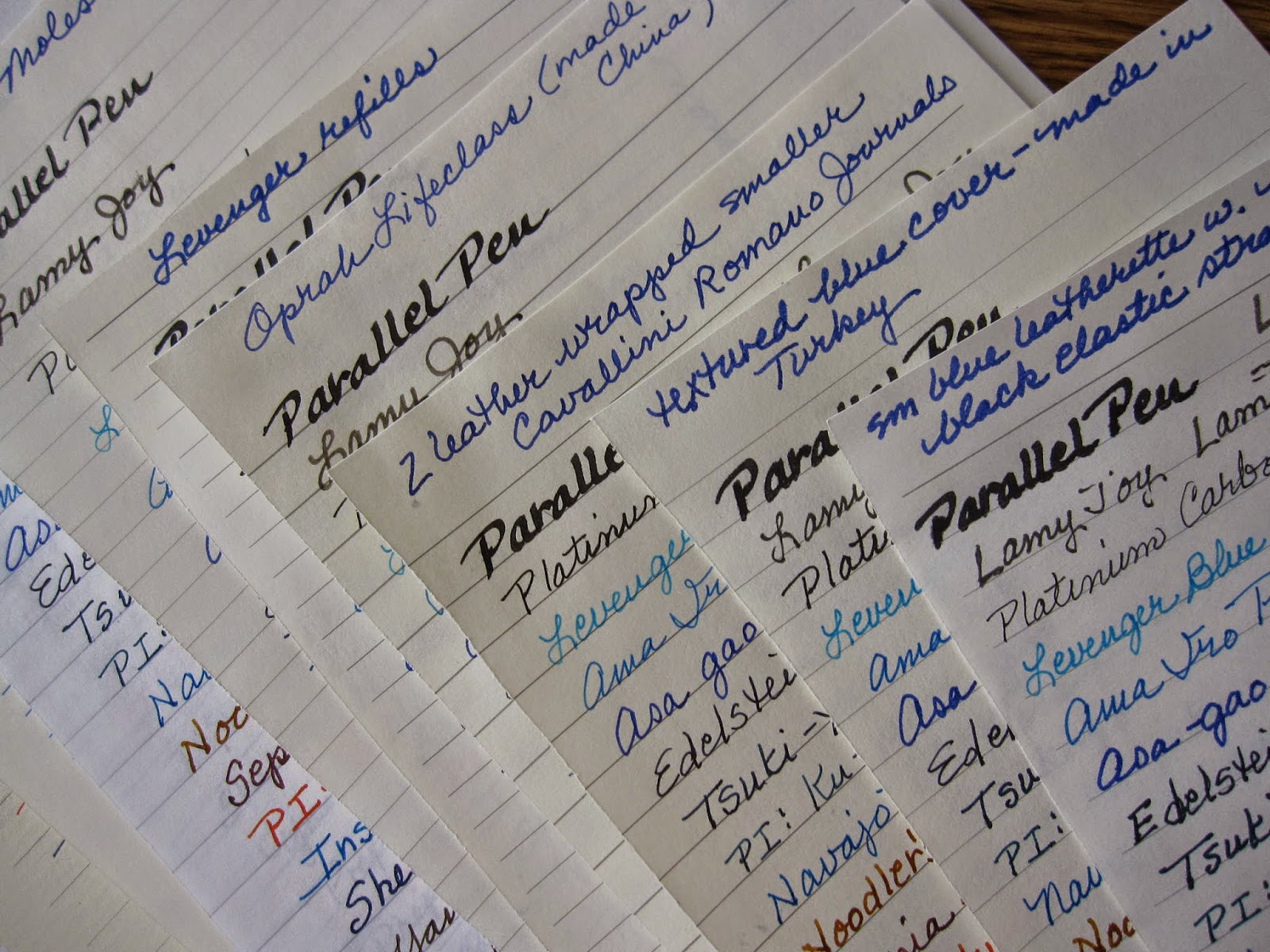 I gathered up all my currently inked fountain pens plus a few gel pens, too.  I cut out the back page that is usually glued funny anyways and used that as the test page.  Out of that whole stack you saw on the table there were only two of them that did okay (not good) with FP ink.  Most of them failed partially or totally...as you can see here where the ink would bleed right through the page. 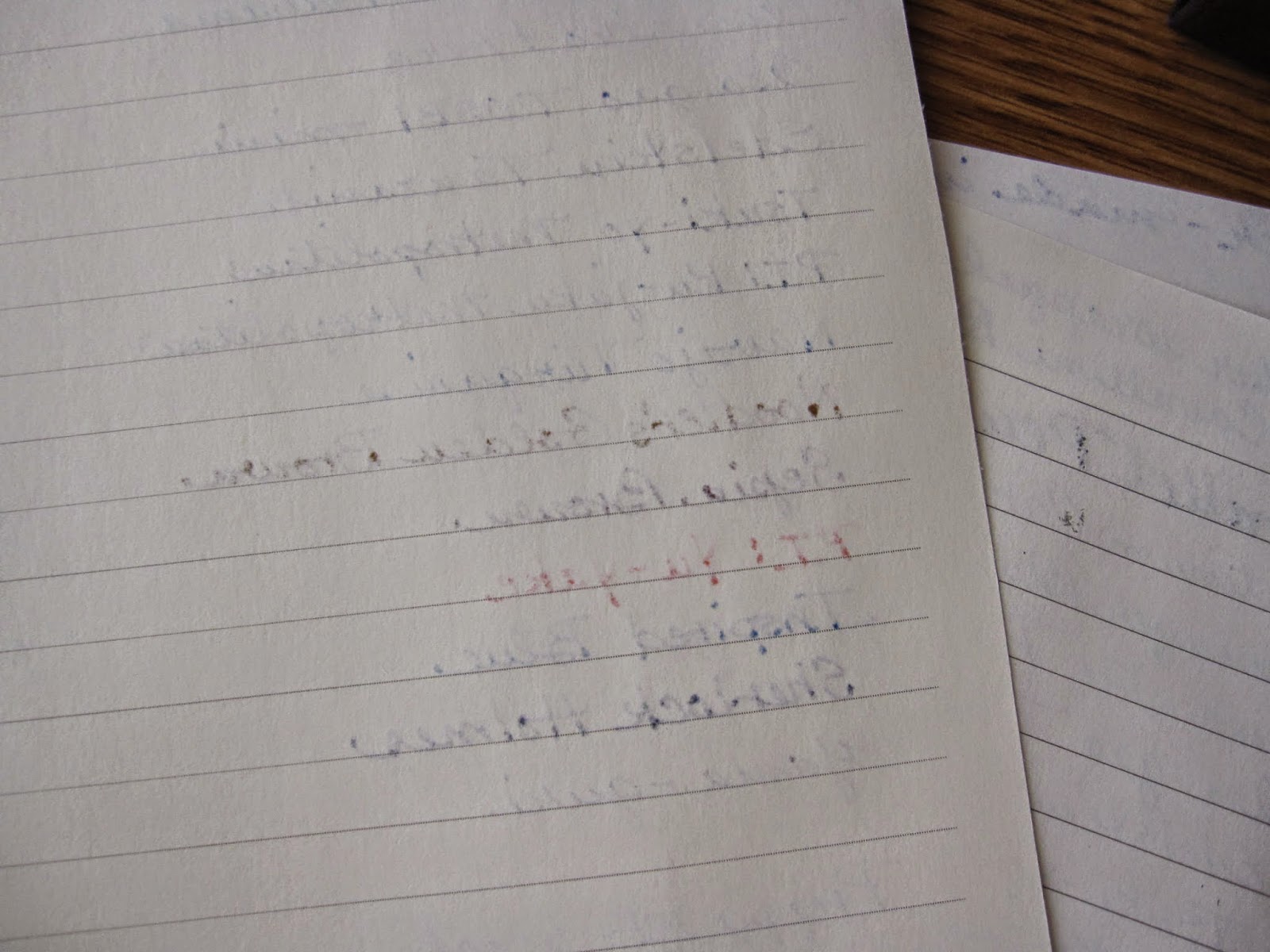 These two were the best of the lot... 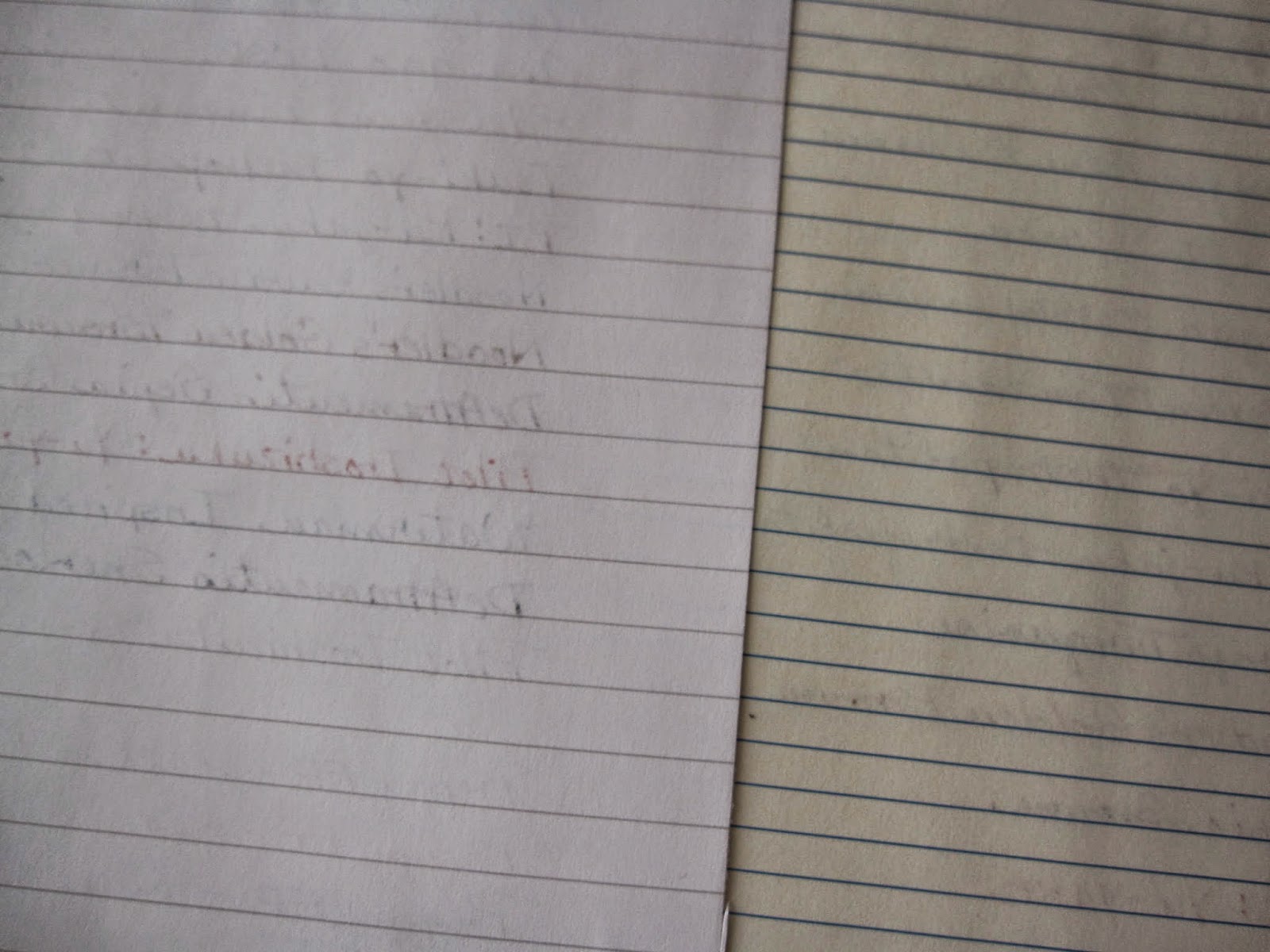 ...and that is why all these have been sitting in a drawer for years.  Some of these have been waiting to be used for over 20 years!  Why?  Because I love using my fountain pens for journaling in the mornings and for writing most of my letters...and you don't know until you try to write in them if they are going to be horrible or not. 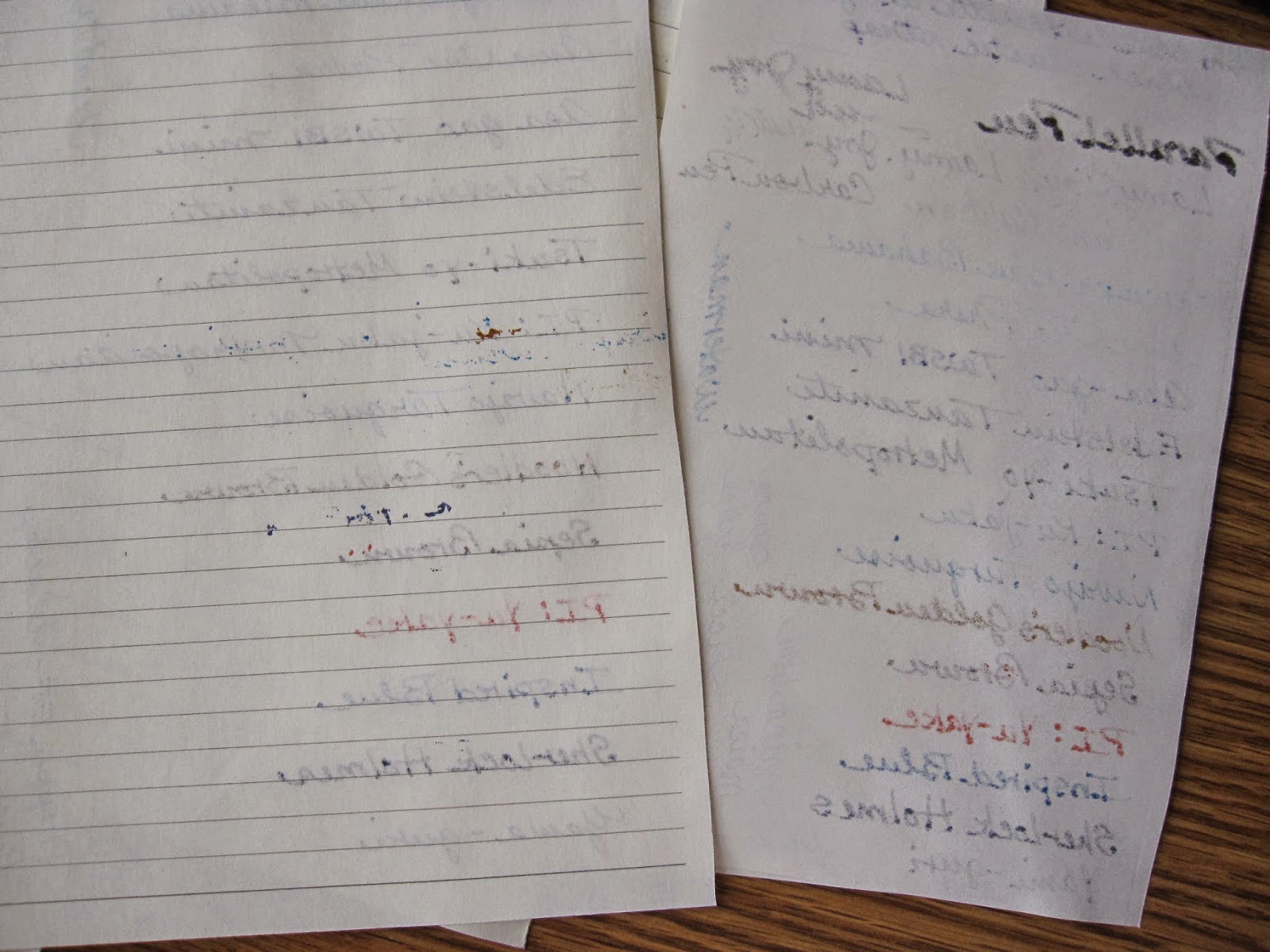 Luckily we have the internet now.  I have a really decent shot at finding FPfriendly paper...like QuoVadis, Rhodia, Clairfontaine...ahhh!  But I really, really do need to use up all these rejects.  *sigh*
****
Anyways, I fold the page and tuck it inside the cover...adding a post-it note reminder in case the sheet falls out or gets misplaced.  They've all been tested now. 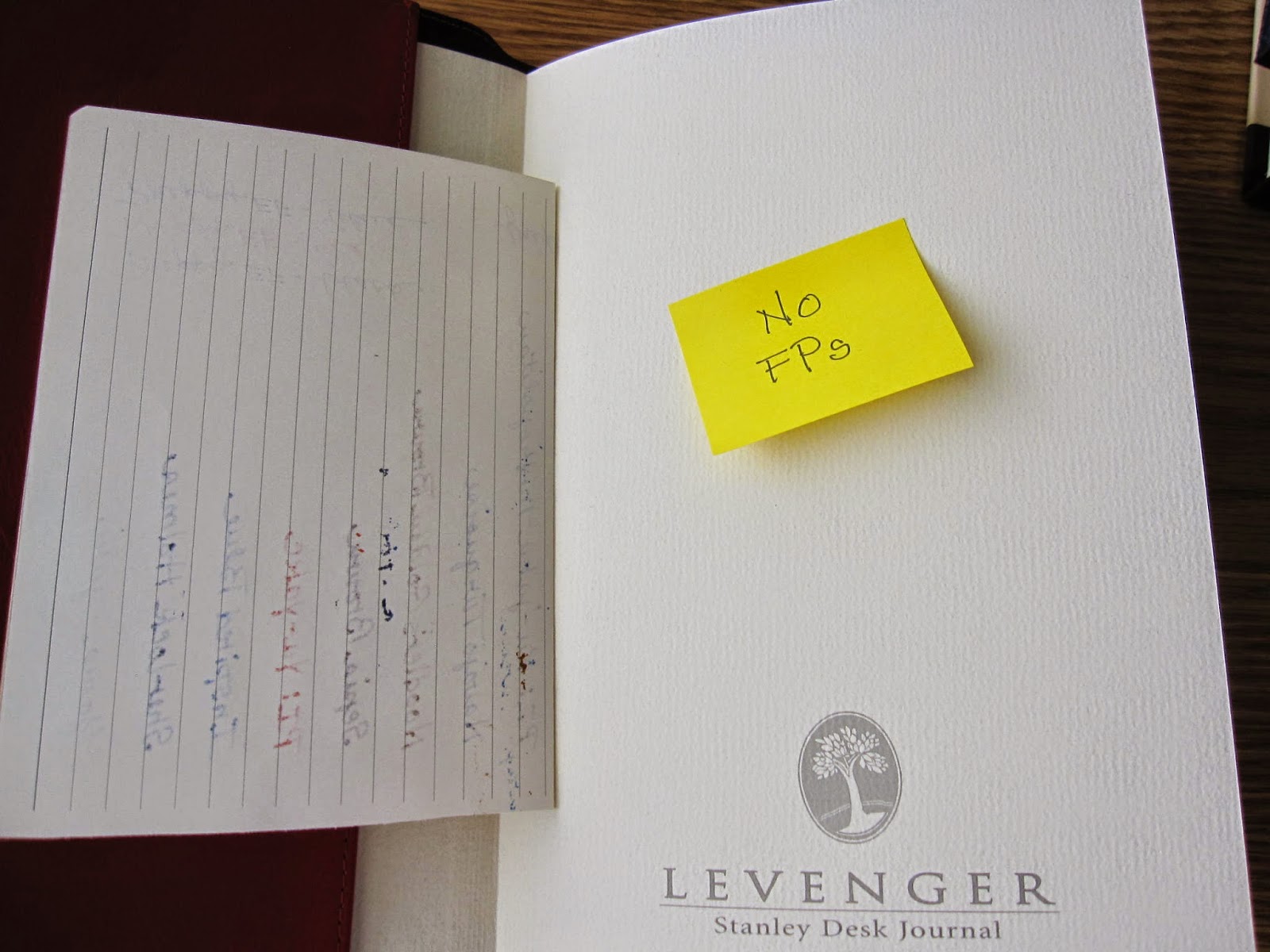 I told myself that I HAD to use these journals up.  That I couldn't buy another quality FPfriendly journal until I had used at least one reject.  I foresee being much chummier with my gel pens in the very near future--LOL!  But I can still use my fountain pens to write letters.  :)
****
BTW--I am still not getting some of my blog comment email alerts so I cannot respond to some of you.  Beginning to wonder if they are ever going to fix that issue.  If a few of you don't hear back from me, that's why.  :(
****
I did watch The Theory of Everything and Birdman while I was sick.  I was fascinated by The Theory of Everything because I didn't know much of anything about Stephen Hawking's personal life and Eddie Redmayne's oscar-winning performance really was amazing.  Excellent movie. 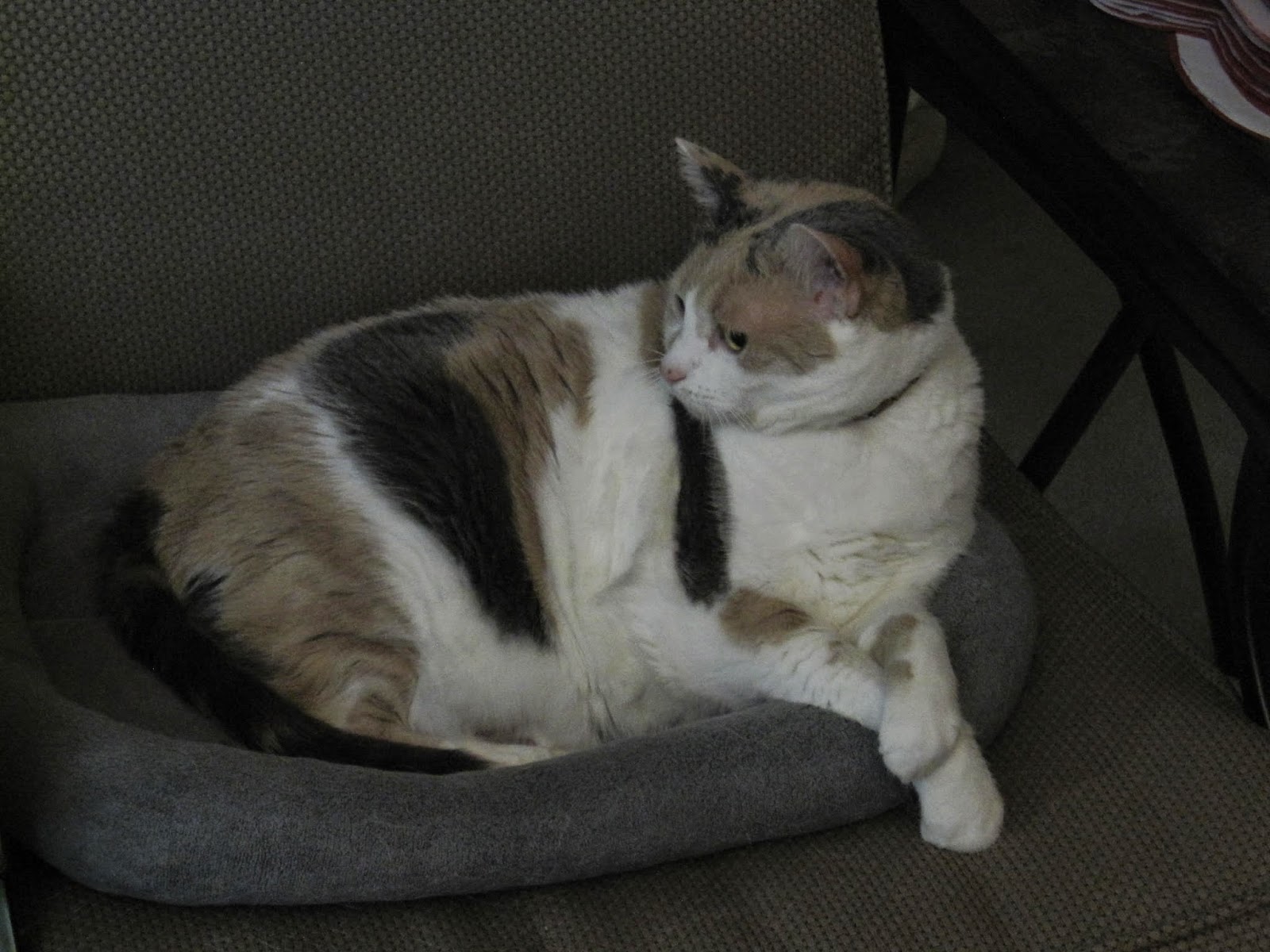 Birdman, on the other hand, I didn't care for at all.  Comedy?  Won best picture?  Well, that only makes sense because it appeared to be a picture made for all the people in the industry...and they were the voters.  Watching it felt kind of like going to a class reunion with a spouse who went to a different school...one long evening of private jokes, everyone else having a good time, and you sitting on the outside, politely smiling, but not really getting any of it, you know? 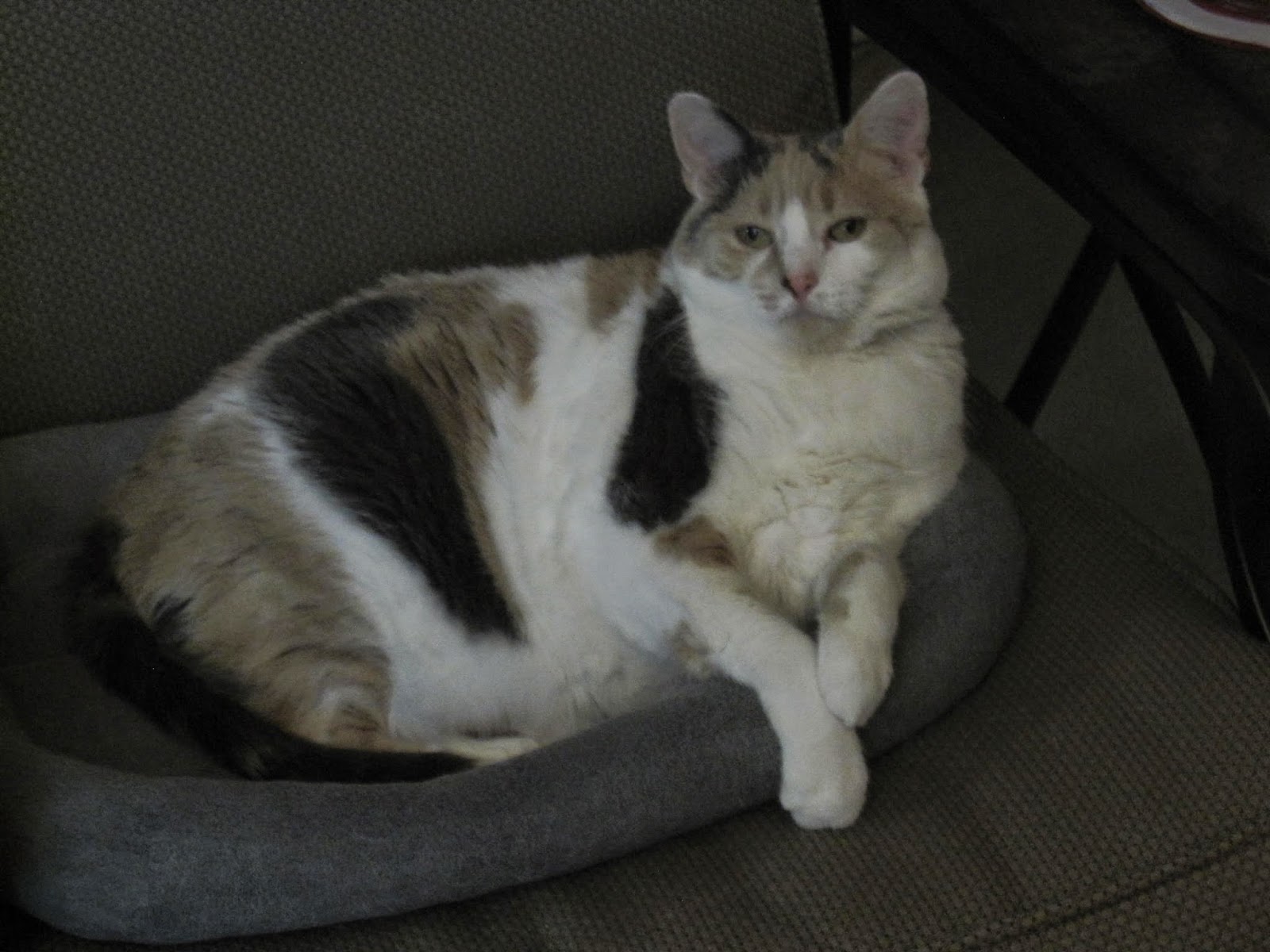 Was anything but funny to me.  Depressing, disjointed, and one big, long downer...with a crazy, ambiguous, unsatisfying ending.  I really enjoy dark humor...but this one totally missed the mark for me altogether.  I still can't believe it got best picture.
****
Sorry.  I usually figure if I don't have anything good to say...well, you know.  But best picture?!  I am still totally baffled by that.  Did anyone else see it and love it?  I am mystified.  Except for knowing who the voters were.
****
I did love The Theory of Everything and am looking forward to seeing The Imitation Game which is coming out the end of the month on Netflix.  I haven't even watched the latest season of House of Cards yet and the newest season of Mad Men just showed up on Netflix, too.  Always plenty to watch.  :)
****
I hope this is a better day and I can get back to the sewing machine.  That's the plan.  (But that was the plan yesterday--LOL!)  I am on the mend now, though.  Today is bound to be better than yesterday.
Have a great week!!
****
"I have noticed even people who claim everything is predestined, and that we can do nothing to change it, look before they cross the road."
Stephen Hawking
Posted by Rita at 11:22 AM