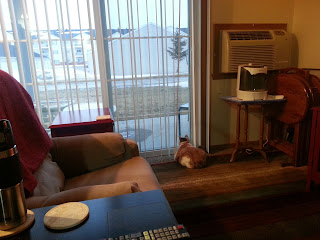 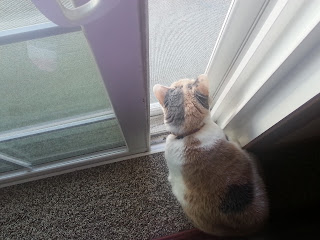 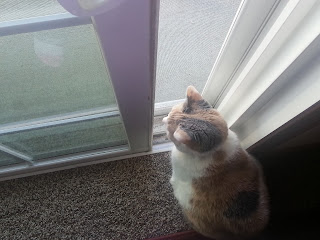 ...laced with a hint of rabbit poop. 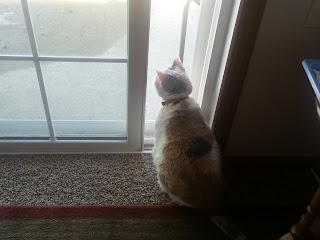 It was warm for three days last week--30s and even got up to 47 one day.  Lots of melting going on and it felt like spring.  And now it has been above freezing again for a couple of days--whoohoo!  :)  It's nice when the February thaw comes around to give us a short break.
****
I ordered a clear cover for my big cast iron skillet and a couple more utensils to match the new ones I got from McFamily for Christmas (because I love them and everybody needs more than one big spoon or turner--and I need more soup ladles, for sure).  Luckily for Karma, Amazon sent them in ridiculously large boxes so she's claimed them. 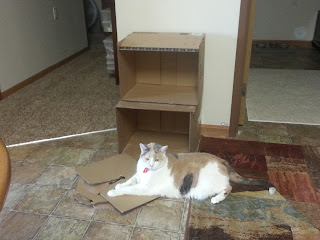 We have seen the sun a couple of times--honest.  LOL!  Sometimes only for a peek in the morning. 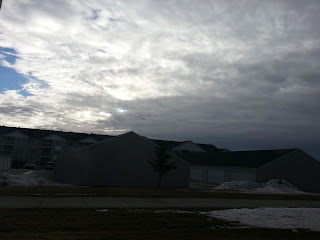 Yesterday morning Karma wondered why I was acting all frustrated and was getting up and down messing with the modem and McLap instead of allowing her her precious snoozy morning next to me at the table. 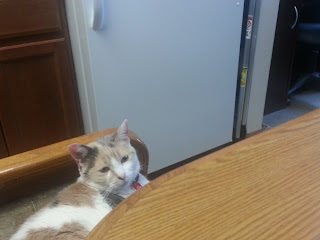 I had no internet.
Even when I restarted the modem and McLap. 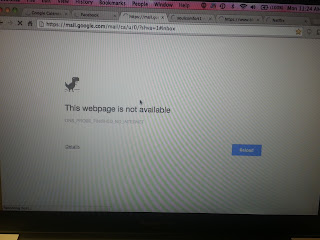 So I got a hold of Leah to see if they had internet (now that we have the same company) but hers was fine.  She wondered if it might have something to do with the big funeral at Scheel's Arena which is less than two blocks from me.  We had a policeman killed on duty up here--first one in 130 years.  Even some Canadian mounties were coming down for the funeral yesterday and they expected around 6,000 people to attend.  (Remember I don't have TV anymore.)  It's been all over TV up here since it happened and they were going to televise the funeral and stream it online yesterday, too, Leah thought.
****
Yup, she was right.  The internet came and went during the day several times--overloaded by the influx of thousands of people along the procession route--and probably more people watching online at one time than ever--but service was all back to normal after the funeral.  You can't be annoyed when it was because of something of such import.  I kind of felt badly that I didn't know and had been annoyed, you know?
****
It was a dark day but above freezing, at least--so no ice.  There was a 21 mile procession through town.  You can read about him here and see the funeral here.  (I haven't had the time to watch the whole two hours yet, but I will finish the last half today.)  I do admire those brave human beings who put their lives on the line for others.
Rest in peace.
****
On a lighter note, Leah changed Craft Night from Sunday to Monday so she was over last night--earlier.  (Dagan put Ian to bed so that she wasn't here till all hours--LOL!)  We had a long list of things to do--from fixing the hinge on Karma's cat box to watching some card videos to filling a box of goodies to send off to Donn in Florida.  She brought me over some cupcakes, too!  We always have a great time.  :)  And we never even got around to working on cards and tags last night--LOL!  Next week.
****
Karma is snoring next to me in her chair.  All is right with her world today.  It's another dark, cloudy day--about the same as yesterday--35 degrees right now.  Just above freezing.  But we had some rain or something during the night and the sidewalks and parking lot looked coated with ice when I first got up.  Melting slowly now that it's above freezing.  The grouse are around actually grazing once in a while instead of constantly racing past.  Maybe it's been this false sense of early spring that has them all riled up?  Who knows?
****
I've still been spending most of my time writing/answering letters.  Sent off number 48 today!!  Whoohoo!!  I've almost completed my master list that I wrote up the beginning of the month.  Now am just continuing to respond to letters I am getting in the mail, so the letter writing has slowed way down.
****
My knee is better.  Still blowing my nose, but feeling pretty decent again.  And I can have a cupcake for dessert at lunch!  Life is good.  :) :)
****
Oh no!  I totally forgot the drink pic for T-Stands For Tuesday!  Well, you know my red thermal mug is right next to McLap here.  ;)  Happy Tuesday!!  Have a really good week.  :) :)
****
“In the end, though, maybe we must all give up trying to pay back the people in this world who sustain our lives. In the end, maybe it's wiser to surrender before the miraculous scope of human generosity and to just keep saying thank you, forever and sincerely, for as long as we have voices.”
Elizabeth Gilbert
Posted by Rita at 12:01 PM