Good Morning!
This past week I had two really good days (head cold-wise) and then it was right back--LOL!  Not quite as bad, but enough to mess up my sleep half the week.  Besides that, though--there's some really good news!  Mom decided she didn't need to stay in Florida for the winter and she wanted to take the next apartment that opened up at Chandler Place.  And she got one!  She'll be moving in after Thanksgiving!!
****
I'm so happy for her.  She will love it there.  There will be something going on every day of the week, which she'll love.  My mother is a social butterfly unlike her happily hermit daughter--LOL!
****
This weekend, though, I actually went to something here.  I know.  Don't fall over.  Besides the big resident meetings for the management takeover, I haven't been to anything since last November.
****
Sunday was going to be a Gramma Day and they just so happened to have the first "Family Fun Day" here in the Community Room.  Dagan, Leah, and Liam were planning to come, too, but Leah had a birthday party to go to on Saturday and when she woke up Sunday she could hardly walk (sciatica).  I sure know how your health can change plans and how bad sciatica can be.  Poor Leah.  So Dagan dropped Ian off and Leah rested as much as possible all day long while Dagan tended to Liam.  I hope she feels better today.
****
Ian and I had a little while before the Family Fun Day started at 2pm.  Ian was in the cat toy box picking out which toys to have out for Annie...and he came across Karma's old collars.  (Yes, I kept them.)  Next thing I know he was wearing her old leather collar--ROFL! 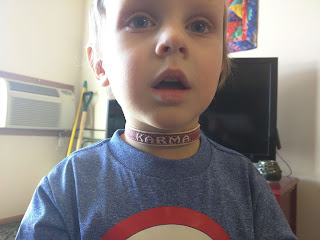 Looks snug but there was a good inch to spare--just like when Karma wore it--LOL!  So funny to think Ian's neck is the same size as Karma's was.
****
I said he was so silly.  So when he wanted to try on Karma's summer collar he wanted me to take a silly picture. 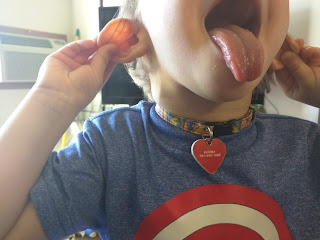 Then he found the collar we ordered for Annie that she hated with a passion--never having had worn one her entire life. 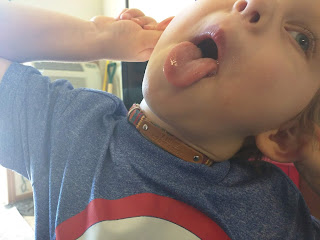 These are the silly things we do.  ;)
****
Then at 2pm we went down for the "party" for close to two hours.  I think this is our new activity coordinator (can't remember her name--and when I thought about it I suppose she could also maybe be the office manager).  Anyways--new lady. 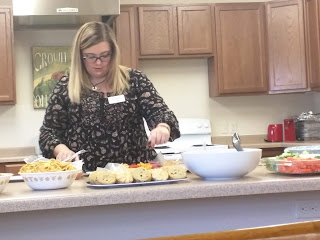 Her oldest son (7) was fascinating to Ian.  Not only because he could work the paddle ball but his name was Liam!! 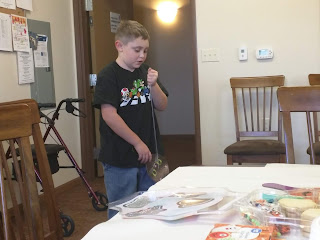 Liam has two younger brothers and you could tell he's a good brother by the way he was with Ian.
****
Ian just watched him intently as he worked at that paddle ball. 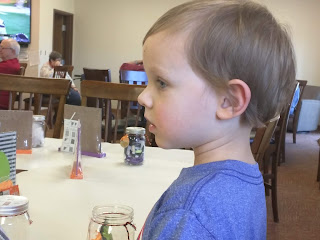 When we came in we got settled in at an end corner of the kids' craft area tables.  There weren't a lot of people at first. 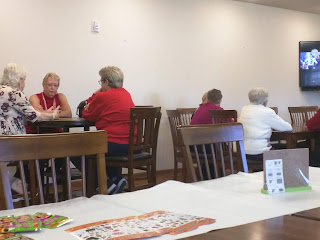 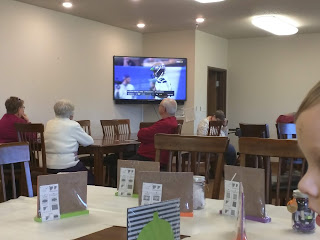 ...but there were no kids for about half an hour. 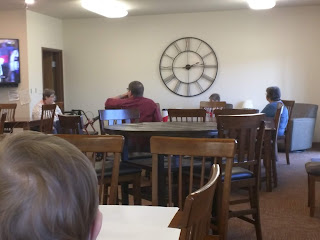 We opened up one of the activity books and found this cat mask that Ian loved. 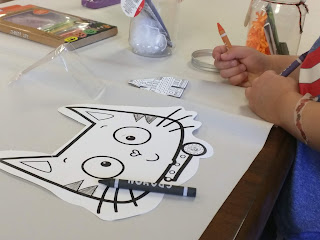 But when he found out he could decorate a cookie...forget it!  The cat mask had to wait. 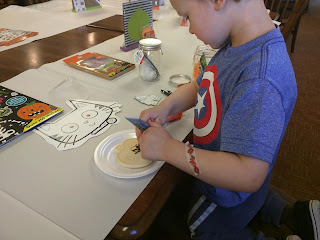 The cookies were pre-made and there were tubes of colored icing and a variety of sprinkles to choose from. 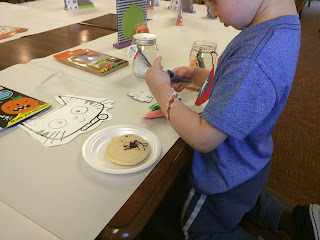 The icing didn't come out easily, but Ian worked at it and didn't want any help. 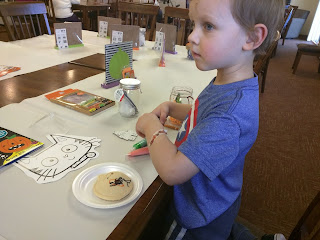 I took this picture, but he did add a little more icing and some sprinkles. 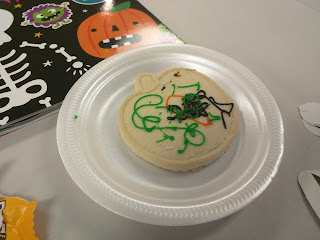 By the time I thought of another picture of the final product most of it was in his stomach already--LOL!
****
People started flocking in. 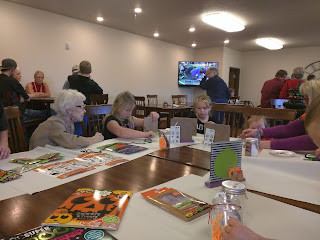 More kids around the table. 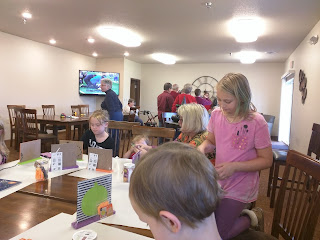 At one point the room was packed!
****
Ian also worked on one of these plastic jar kits you have to put together.  His had a haunted house with orange paper inside.  He added stickers all around the outside of the jar.  I think they glow in the dark. 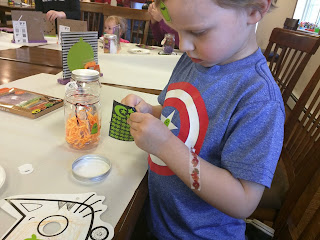 He had a plate of snacks--bugles, chex mix, cheese, some kind of luncheon meat, and lemonade.  He didn't want raw veggies, he said.
****
People didn't stay long.  They were clearing out by about 3:30pm (supposed to be 2-5).  Ian and I had been working on all the tons of stickers in the activity book where he got the mask.  Nobody else has touched the other activity books...so I asked the new activity director lady if Ian could take the booklet with him he was working on.  She said yes.  Ian showed her his cat mask with great enthusiasm.  She sat down to chat with him for a while--saw that his mask needed some string--went to go find something--came back with ribbon--and cut and attached it so he could wear the mask home.  He wouldn't take it off till we went to watch the movie Ice Age...and then wore it home with Daddy, too.
The sweetest thing of all was when we were leaving he stopped, turned, waved to the whole room, said goodbye and "thank you for the visit".
****
We watched half of Ice Age.  Then I made some goulash for dinner (one of the things he loves to eat at Gramma's).  While I made dinner he watched a Mighty Machines episode on YouTube.  We ate--he refused broccoli.  Watched the other half of Ice Age.  Daddy came to pick him up right as the credits were rolling.  We had totally forgotten about bringing the trash out, so Dagan offered to dump it on the way to the car and off they went.
****
But then they came back a few minutes later.  Ian didn't think we had a proper goodbye.  He likes to run down to the end of the hallway by the little front door hall and we have to blow kisses and say "goodbye, I love you" many times and we hadn't done that with him going out the other door closer to the dumpster.  Plus he wanted to thank me for his Gramma Day and get more hugs.  :)
****
Can't get much better than that.
****
So I hugged the cat-boy and we blew kisses and he was finally on his way home around 7pm.
****
And Gramma was falling asleep in her chair by 9pm--LOL!  I got up and went to bed before 10pm--woke up the last time at 3:15am and couldn't get back to sleep.  My hours have been all goofed up from the plugged head, anyways, but I have been up since then.
****
So it's an earlier than usual blog today.  Annie is confused and waiting for her canned food.  The birds need seed.  Oh--and, sadly, I haven't seen The Girls in about a week.  :(  I haven't done my morning journaling.  My entire morning routine is out of whack--LOL!  So, I am off to actually start my day.  Should be a good one.  Possibly including a nap.  ;)  Till next week.  Have a good one!!  :) :)
****
"The more I wonder, the more I love."
Alice Walker
Posted by Rita at 8:44 AM