Moving slowly today, but here I am.
First of all, before I forget, even though I replied to blog comments (since I wasn't feeling well and could use the laptop while in my chair)...wouldn't you know it!  I had a few of them returned as unable to be delivered.  What?!  So now if you don't hear back from me it might not even be because I didn't try--LOL!  It's like Blogger is plotting against me...either that or I've been hearing too much about conspiracy theories on the news for far too long--ROFL!!
****
I wasn't up to much at all this past week.  Running the reverse temp, achy, and was happy watching all six episodes of the Swedish version of The Girl With The Dragon Tattoo trilogy (with subtitles) before it disappears on Netflix streaming beginning of January.  Since that's so dark, intense, and compelling, interspersing it with episodes of Lark Rise To Candleford on Prime has been refreshing.  I do enjoy my British period shows.
****
Monday after we chatted the big box from Amazon arrived via UPS.  Leah had told me to let her know when they got here... 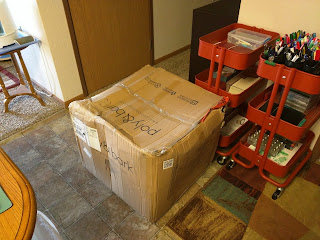 ...but I didn't expect her to come over so quickly right after she picked Ian up from preschool! 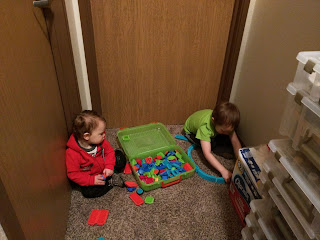 While the boys played with the bristle blocks (and Liam cried a lot because he hates coming to Gramma's where he gets corralled in the hallway) Leah put together the first chair so we could try it out. 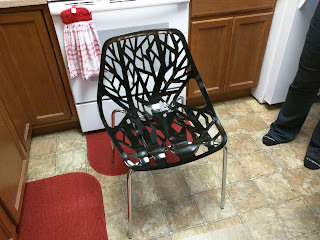 They weren't difficult to put together.  I just don't have the gripping strength to tighten the screws well.  Aren't they a hoot?!  Bird's Nest chairs. 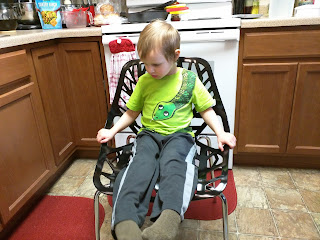 I took a short video of the boys testing out the chair.
Liam seemed fascinated by all the holes in them--LOL!
****
I may not have been up to much all week but McFamily made a trip down to Minneapolis Thursday through Saturday.  Dagan needed his post surgery new pacemaker checkup (tweaking) on Friday.  That night they went to see Great Grandma's new apartment and took her out for dinner to Baker's Square.  I forgot to ask Leah if she took any pictures.  If she did I can post them next week.
****
Before they left Dagan popped by to pick up the warped chair mats from my garage.  On Saturday they stopped at IKEA on the way home and IKEA did take back the awful chair mats!  That night on their way home Dagan ran in quick and we put down the chair mats in the studio! 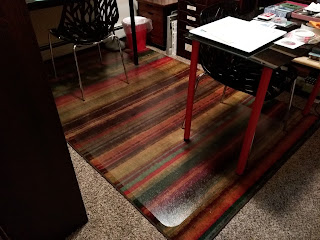 Flat as pancakes!  Can hardly tell they are there at all!! 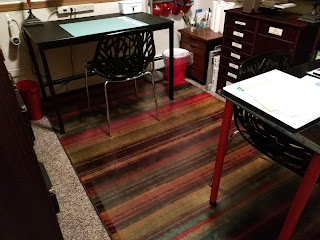 AWESOME!!
****
Leah also found me some rolling desk chairs at IKEA that will fit the bill, too.  I wanted one for where I sit every day at the table and one for in the studio by the window there.  Plain, simple, no arms.  They couldn't fit them in the car with the boys' cat seats but Leah said her sister Ariel (lives in Mpls) is coming up for Christmas and will see if she can fit one or two of them in her car.  So that's really exciting!
****
Yesterday Dagan agreed to come with for Gramma Day because I wanted to paint up some packing paper to use for wrapping presents.  Wanted to do that the weekend before, but I had to cancel.  I knew I wasn't up to doing it all alone (lots of cleaning up involved and lots of standing over the table) and I was thrilled Dagan said he'd come with and help out.
****
The first thing we did, though, was push out the other three chairs to leave by the dumpster.  One had a broken wheel a while ago and already made that trip, as you may recall.  None of them push well unless you are very forceful and all of them are now broken at the base and tilt either forward or to the side.  Hence the new bird's nest chairs (cheap and stackable for this small space) and the wanting a couple cheaper desk chairs that will be more comfy for my old bones.
****
I took a pretty sorry video of us rolling the chairs out to the dumpster (couldn't stop laughing) and saying the last goodbyes to my old flowered chairs.
Then we came in and painted and painted for several hours.  Was really fun!  We used Ian's foam rollers and alphabet painting kit... 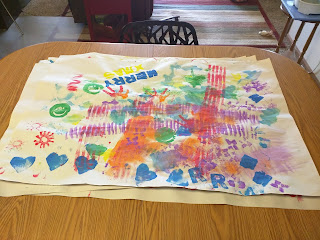 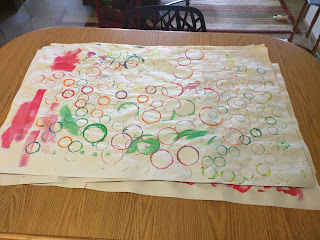 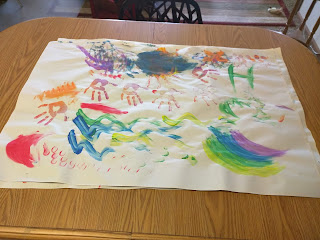 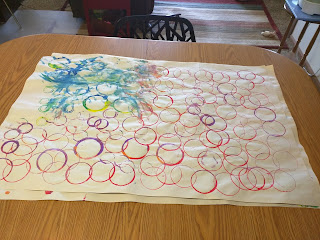 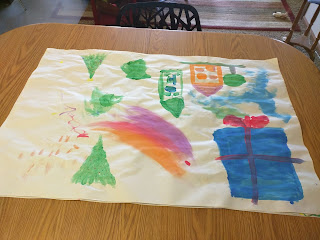 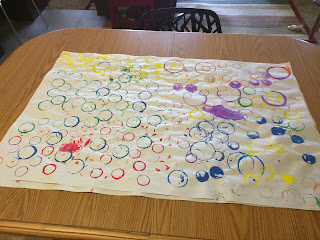 ...and finally hands and fingers for a massive use of the last of the paint! 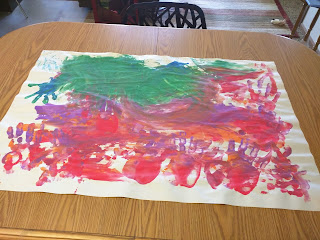 Ian gets a kick out of the mark making where we recycle trash.  (Except for a few items I do wash and save--like the biscuit cutter.)  He'll print a bit and then hold whatever he's using up in a painty hand and say--"Done!  In the garbage."  It is such fun not to have to clean things and just toss them out.
****
We had some snow early in the week. 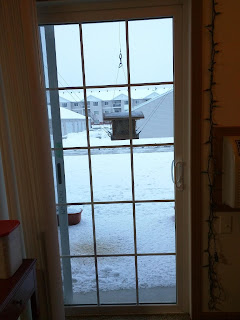 Note: The sparrows are not eating out of the bird feeder. 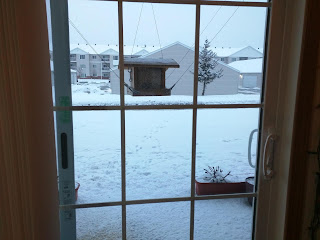 They come in big flocks so as long as I am putting out food on the patio for The Girls, they prefer to eat together down there.  Can't say as I blame them.  Also--notice how much it has melted this week.  Been in the 30s!  I hope all the snow isn't gone for Christmas!  :( 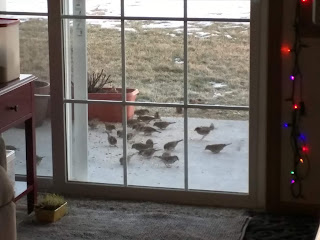 Oh, and that small hawk made a surprise visit several days ago when my patio was packed with grouse and sparrows.  It missed and landed in a planter box, but I haven't seen The Girls for days and the sparrows are quite jumpy.  The hawk must still be in the area.
****
I bought myself a Christmas present.  A new red thermos mug.  I love mine so much but it is getting old and I have been afraid that they might discontinue it, you know? 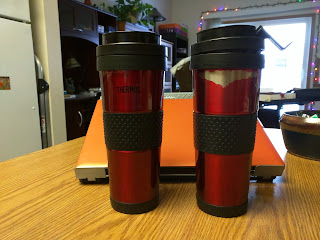 You can easily tell which one is the old one I finally ran through the dishwasher.  It peeled.  That is why I have hand washed it all these years and will certainly hand wash the new one, too.  Maybe I need a third one--LOL!  These mugs are so perfect for me.  Easy to open with my poor grip.  Even if you fill them a little too full you can get the cover on without any spillage or dripping.  Ahhh!  Anyways, was a nice present to myself.  ;)
****
And how does Annie like the new chairs?
****
Well, at first she was afraid of them.  She jumped up and the cat bed slid on the slippery surface.  She was having none of it.  But she'd stand by my chair and cry in despair.
****
So I got out a piece of the old memory foam mattress pad that I had saved and cut up to make cat beds for Karma years ago but never covered them.  (Good thing because they kind of stick to the chair!)  First I tried the round piece.  It stuck out from the front of the chair and Annie was afraid to jump over it.  If I picked her up and put her in the cat bed she was delighted with the new extra comfy bed, but she would not jump up on it. 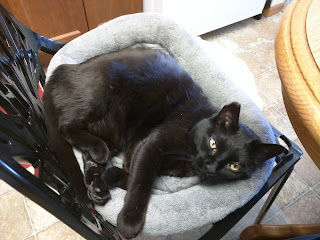 So I tried a little square piece.  Nothing juts out over the edge in the front so she will jump over that, no problem. 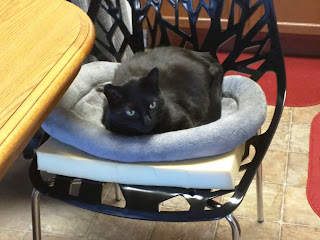 Annie is LOVING the memory foam!!  She settles in and sleeps so soundly that she didn't even hear the key in the door when Dagan and Ian came yesterday!  It is normally very difficult to catch Annie unawares.  She normally hears them as they are coming down the hallway!  But she was out like a light.
****
Her body language--right this very moment--reveals that she is super relaxed and enjoying the new sleeping spot. 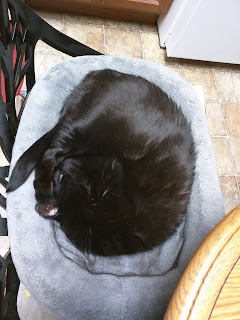 Annie's normally much jumpier and quick to leave if I am up and down or walking past the chair to get coffee or open the frig, etc.  I have even left to get mail and come back and she hasn't moved--LOL!  Maybe her old bones appreciate something super comfy, too.  ;)
****
Anyways, that's it for this past week.  I plan to go over to McFamily's for Christmas next Saturday.  I know!  Do you believe it?!  Before Christmas!  We usually are having our Christmas in January.  Nice!  (That's also why I wanted the paper painted for wrapping done so that I asked Dagan for help.)
****
So--wrapping presents this week.  Since the past two weeks were kind of a bust as far as the new added weekly things, we'll see how this coming week goes.  So far so good...but it's only Monday--ROFL!  I knew this would happen as my health is always on a roller coaster ride--but the thing is--not to give up.  When I start the 12 weeks of Cameron's book come January I do not plan to skip anything.  It might take me longer to get through it, but I will.  However long it takes me, I will get through it.  More time than money, right?  LOL!
****
Okay.  I'll be back on Christmas Eve!  Hasn't this year flown by!  I am praying for snow and listening to Christmas music.  See you in a week!  :) :)
****
"For myself, I am an optimist - it does not seem to be much use being anything else."
Winston Churchill
Posted by Rita at 5:42 PM