Good afternoon, everybody!
We've had quite a few days that looked like this with light rain or without.  The sun has peeked out here and there, too, but been a lot of chilly damp days. 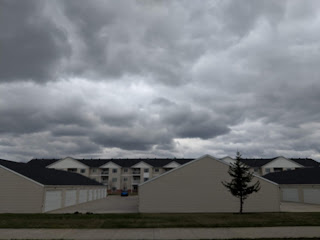 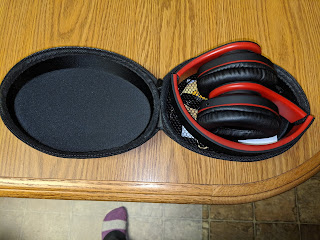 ...but I haven't figured out how to use it yet. 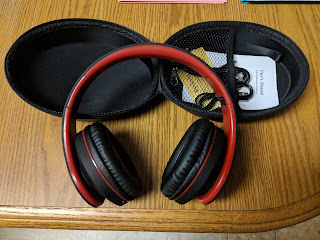 Been either wet or cold out, anyways, so I haven't been out on the patio.  Been busy, though.  I worked on the Christmas cards while re-watching Game of Thrones from the beginning before I see the final season.  (Yes, am really doing that.) 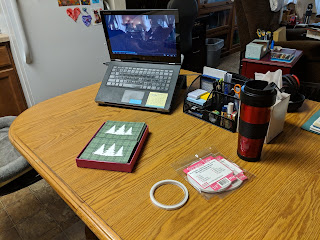 I finished setting in the trees using the wide carpet tape... 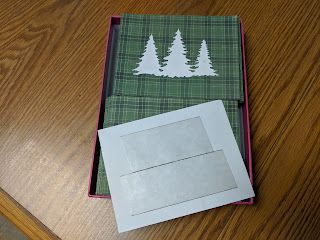 ...and then put double-sided narrow tape around the outside edges. 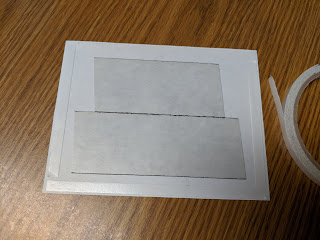 And I finished them all!!
Next is taping them onto the card base.
****
On Thursday I went down the the Community Room for a Coloring group.  Yup!  Even though it was at 10am, I made it.  (Mornings are generally my thawing out time so I got up early.)  Was only the activity director, Kari (not sure how she spells it) and one other lady, but the place got busy due to Meals on Wheels people showing up for lunch.  I ended up chatting with Kari for quite a bit and really like her.
****
I was impressed that they have some events I actually want to go to this month.  Coloring group three more times, two historical presentations, a DNA activity (?), a Do Something Nice Day, a day to bring in donations (like a give-away for anyone here and anything left over is going to somewhere like Goodwill) followed by Drink a Coke time, and a Creativity Day.  I will check out any of those I can.
****
They also have the usual Bingo, Birthday Party Day, morning coffee group, movies a couple of days (I have already seen every one of them so far--LOL!), our two regular library days, and a senior walk day.  They made May baskets and dog treats last week.
****
I am really surprised that this is all coming from Goldmark.  Shocked, actually.  Their reputation has been soooo bad up here in the Fargo-Moorhead area for decades...but I have to admit I am impressed that they are really trying.  Managing apartments for old people must be lucrative--LOL!  ;)  I'll let you know how it goes as I check some of these things out when I am able to go down.
****
Speaking of old people--ROFL!--my mom is doing really well in her new apartment.  She loves walking around the pond outside.  They have mallards (likely nesting) and she can buy corn at the front desk to feed them.  She can hardly wait until they plant flowers.  We have a couple more weeks before we can do that up here.
****
Caroline brought my groceries on Friday so the larder is full again.  Always nice.  :)
****
Dagan had his checkup (heart/pacemaker) in Minneapolis last week and everything checked out fine!  They have to order for delivery on a bed for Liam because it won't fit in the car, so they'll order mine at the same time.
Nope--not telling.  ;)
****
Ian was over for a longer Gramma Day Saturday.  He wanted to eat dinner here, too.  :)  At lunch he showed me his spork and spork holder he uses for school.  There's a smaller kids' one and an "adult" one inside the holder.  This one in his right hand is the adult spork, he told me, because it has a small serrated "knife" on a side tine of the fork end. 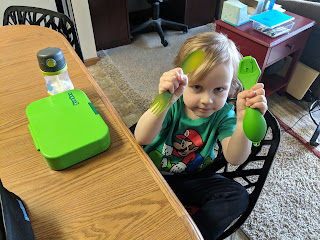 After lunch we opened up one of the three craft kits Tori sent Ian from England months ago.  (Yup--was a long winter and, believe it or not, Ian and Mama are sick again, too!) 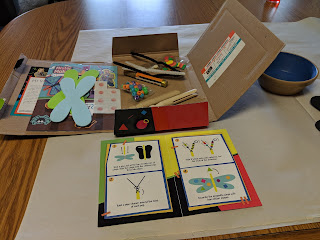 With this kit there were two dragonflies and a bee to make from clothespins, foam, beads, pipe cleaners, etc.  Ian really enjoyed it! 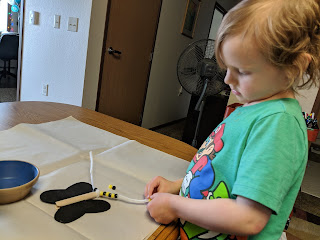 Working on the bee antennas.


Finished, but still wet, bee.
(Still think it looks more like a butterfly.) 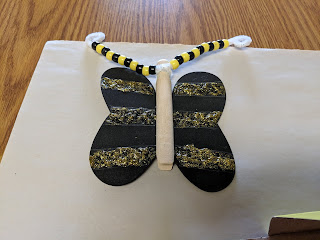 I drew in some white lines for Ian so he'd have something to follow to make the glitter glue stripes.  We used an old paintbrush dipped in water to spread around the glitter glue better because it was harder to do with just the plastic nozzle.
****
Then he worked on the dragonflies.  Decoration for those was easier--just foam stickers in shapes. 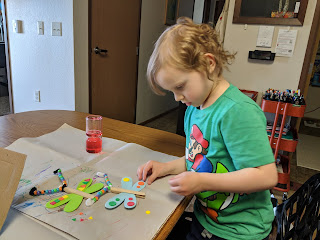 Ian...confessing to me he could only watch nature shows with me and not any PJMasks because he had a temper tantrum in IKEA. 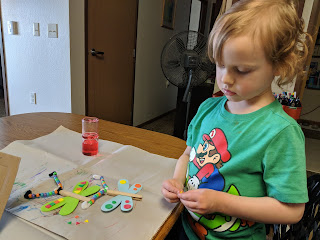 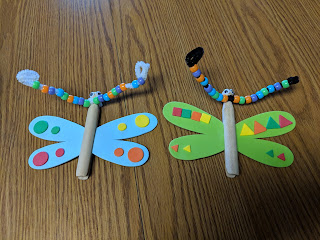 We split a blueberry bagel after we finished crafting, but Ian wanted me to take a video of the finished dragonflies.


You can hear that cough again.  Mama doesn't sound good, either.  When will it warm up here and they can all get well and stay well!  Good grief!  :(
****
Anyways, we had a great time.  Thanks Tori!
****
Didn't finish the crafting till 4pm, watched the last episode of the The Deep Ocean, had dinner, and when Dagan came to pick him up it was already bedtime!
****
Okay--this is something really silly!  I was watching a video from Jerry's Artarama where this guy, Mikey, was trying to paint along with Bob Ross...and, since I had done this once myself, I was cracking up through the entire video!  If any of you have ever tried following Bob Ross you would really get a kick out of this video.

Bob Ross makes it all look so easy!  It's not.  He is much more talented than people give him credit.  I had all the right supplies, but not his easel.  I would watch a little, pause the VHS (yes, it was back in 2001, I think), and try to do what Bob did (which I couldn't, either).  Very frustrating, yes.  I was laughing and giggling--sent the link to Dagan and Leah because we have tried painting together with acrylics (not Bob Ross, but acrylics are almost as difficult for me as oils).
****
Leah sent me a photo of the Bob Ross painting I did!  I was going to throw it away and I forgot that Dagan wanted to keep it. 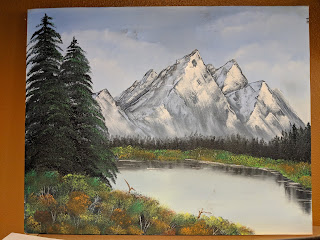 So, that's my Bob Ross attempt--LOL!  It resides at McFamily's in a hallway upstairs, I believe.  Rigid triangle mountains and sad trees, not happy trees--ROFL!  Maybe some day I will try again.  It was frustrating but it was still fun.
****
Earlier this morning Leah was texting me because Costco had flowers for sale again--8 for $27.99!    I wanted red ones!  She dropped them off for me and I have them on the curio cabinet in my bedroom like I did last year.  Got four red geraniums and four red begonias.  Whoohoo! 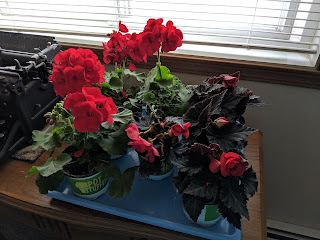 So nice to see flowers...even if it is still too cold to plant them.  I will tend to them the next 2-3 weeks until we can plant them on the patio.
****
I'll leave you with Annie checking out her new cat toys.
****
Fact--I can't get down on the floor and dig out the toys from under the chairs, cabinets, and end tables so I have to wait for someone to come over who can do the hunt for me.  I put out a few at a time and when they disappear I put out a few more...but when they have all disappeared and there are no more Annie gets upset with me.  I end up trying to swipe out what I can with a yard stick and usually only get one or two.  (She plays very aggressively and they end up way in the back.)
****
So, I finally ordered a bunch of new cat toys.


Four more new toys came on Sunday!  Annie is one happy cat.  :)  She hunkers over them so that I can almost imagine her saying--"My Precious!"  She's exhausted herself this weekend.  Is snoring away next to me right now.  Didn't even wake up when I went to finish laundry.
****
Well, that's it for this week.
♭ ♭ Happy trails to you...
till we meet again.  :) :)
****
"The greatest surprise is that there is anything at all--that we are here."
Br. David Steindl-Rast
Posted by Rita at 4:00 PM