Well, I had planned to post after seeing the new GP, Dr. Lien, but I turned out I had to cancel and am rescheduled for Monday the 26th.  Embarrassing explanation to follow.
****
Warning:
Ugly knuckle pictures.
But it's better than pictures of my uglier toes--LOL!
****
Sorry.
You guys are probably so sick of hearing about all of this, but I can guarantee you not as sick as I am of living with it--LOL!  The infamous knuckle and toe have been gradually getting worse over the last week or so.  The huge, painful knuckle is why I am not online as much as normal and comments are usually brief if I make any.  For quite a while it had been easier to hand write because of not having to hardly move the knuckle. 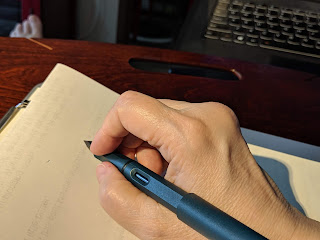 But over time since I quit the steroids it has slowly become more swollen...and the swelling was spreading.
****
Dagan came over on Wednesday to take out a heavy trash bag for me.  I had promised them because of my back, but my hand couldn't have handled it, either.
****
Thursday Leah came over again for a Craft Nite--tada!  She had planned to work on Liam's invites for his birthday, but she hadn't gotten all the okays on the date yet.  So we started working on the other set of three-tree cards.  Leah started taping the fronts on (removing all the two-sided tape is a project)... 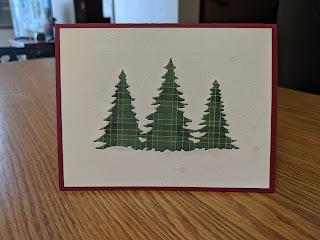 ...and I used a tape runner (much easier) to put on the inside piece. 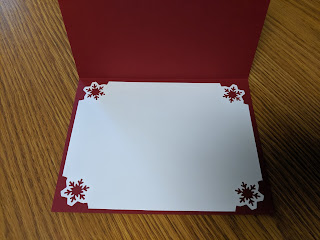 Sadly, that is the one card I managed to finish.  My hand was too sore to even use the tape runner.  Leah took a picture of how much the swelling was spreading--other knuckles, was going up my finder next to the knuckle, and it even looks like my hand and wrist might have been swelling. 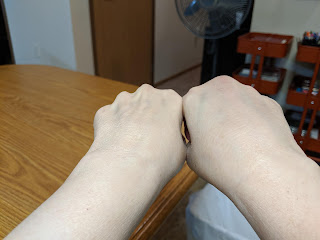 So, I reluctantly decided to start that last steroid refill I had on Friday.  Thinking I would be seeing the new GP today on Monday, right?
****
I am so tired of this knuckle business interfering with my life. 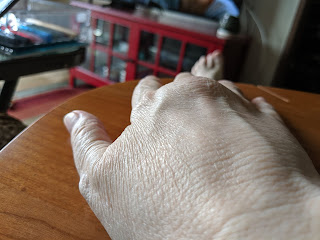 The toe was getting worse, too.  The swelling was spreading into my foot and neighboring toes at the bases--but your toe isn't as much of a hindrance to daily life, you know.  You don't brush your teeth with your toes.
****
Anyways, I decided to try the last of the steroids to see if they would do anything.
****
Meanwhile, Annie has been very attentive and--dare I say--cuddlier.  I think she's worried about her food source--LOL!  ;)  That clump next to her is a flower from the catnip plant that went to seed that she bats around. 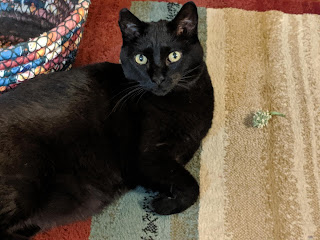 She's even been coming up to sit next to me on the arm of the chair while I was slowly writing letters.  Normally she didn't want to come up if my lap was occupied. 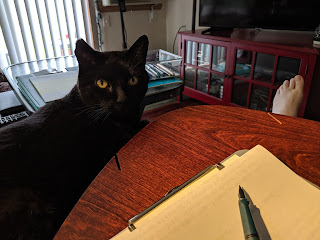 Anyways, after a couple of days on the steroids I could hand write again with less pain because of less swelling coming up that finger, too. 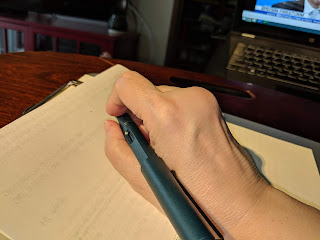 I know it's not that easy to tell but the rest of the hand swelling around the knuckle had gone down some... 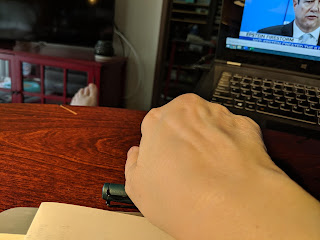 ...even if that darn knuckle remains a small, hard mountain. 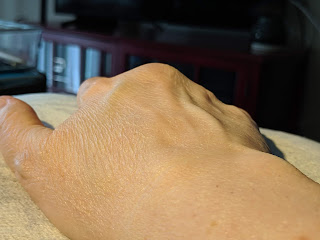 ****
The steroids effect my ability to sleep very long but make me really tired--so in no time I was napping around the clock.  I had to cancel Gramma Day on Saturday.
****
On Sunday I did make soup.  Completely new combination for me.  Trying to stay closer to Keto but needing less broth-y and more my usual stew-y, filling soup.  I put in a few beans, all kinds of veggies, some of my Gardein fake hamburger (got to get the rest out of the freezer), and mushrooms.  Really delicious!  And so much more filling than broth with cabbage and carrots--LOL! 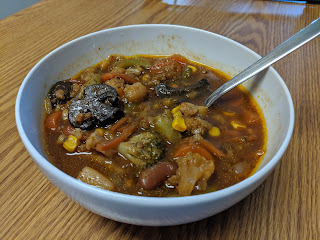 ****
Leah got the date okayed and wanted to pop over on Sunday to finish up Liam's birthday invites.  She asked if Ian could come with since we didn't have a Gramma Day.  Sure!  (Neither of them mind if it's a house dress day.) 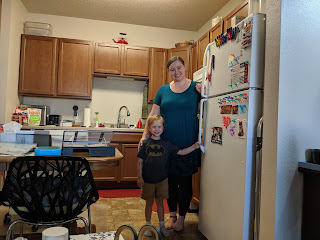 I had purchased the ingredients for a meatloaf back when Caroline got groceries for me on the first.  Have been thinking about meatloaf ever since because it's been over a decade since I've had any and I used to love it--maybe even has been 15 years?  But my hand hurts to grip or squeeze--well, do anything really--and hasn't gotten well enough to be able to put it together.  Leah said she'd do that for me--whoohoo! 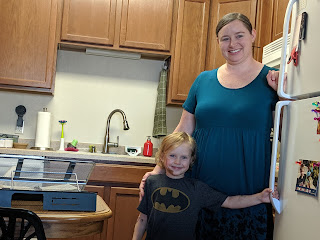 So, I thawed out the meat and Leah mixed it all up for me and popped it in the oven before they left.  Was absolutely delicious, I have to admit.  :)
****
BUT--I totally blanked!  My own fault.  I know better.  The steroids make me quite hungry and extremely thirsty, but that's no excuse.  Because of the IBS with the fibro I usually am so careful about what I eat the day or two before I have to go anywhere and I usually don't eat after lunch the day before...plus the steroids have given me the very same issues, too...well, duh!!
****
Let's just say that is why I had to reschedule Dr. Lien's appointment and why I am also writing the blog so late in the day--LOL!  I am finally finished with throne time.  Good grief!
****
I do have enough BP pills, though.  I counted.  Feel so silly.
****
Well, Dr. Ryan, the orthopedic doctor, wanted me to email him to let him know how I was doing in a month.  So probably tomorrow I shall do just that.  And let him know it's not gone, etc.  He may want to see me again or prescribe more steroids...who knows?  Anyways, I'll let him know.
****
Besides all that health stuff...and despite the swelling flaring up worse in the knuckle and toe game over here...I have been in pretty good spirits and enjoying the cooler weather so much!  So has Annie.  I have the patio cracked or wide open as much as possible.  This doesn't feel like August weather.  But I love it!
****
When I do get dressed I am often, like I said I would, wearing things I don't normally wear.  Long, flowing, crinkle dresses do surprisingly lift my spirits.  And for some reason Annie likes to lay on them between my legs on the chair.  Maybe they make her feel a little glamorous, too?  ROFL!
****
Anyways, I am fairly confident that Dr. Ryan will probably either have me come in or call in a prescription for more steroids.  (I can send him the pictures--LOL!)  Meanwhile, Annie is parked between my legs but keeping her eyes peeled for any critter visitors.  I think she really misses me feeding them every day so that they were around here all day long.  Fall is coming soon enough.  ;)  I miss them, too.  I may start again earlier than I think.  I just hate to think I am feeding those voles.  But I haven't seen one for a while now.  They may be trapping them.
****
Okay--time to go.  Knuckle is not as happy as I am--LOL!  I'll rest my hand a while and then it's time for dinner.  I think I hear meatloaf calling me.  Have a great week!  :) :)
****
"Just to be is a blessing.
Just to live is holy."
Rabbi Abraham Joshua Heschel
Posted by Rita at 5:32 PM