Deliberate late start today.  Thought I might as well wait until I had been to see the new GP, Dr. Lien.
****
Anyways, today was Ian's first day back for his second year at preschool. 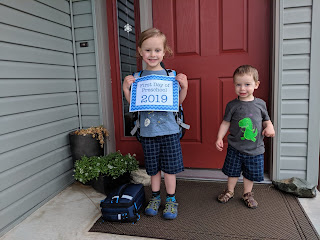 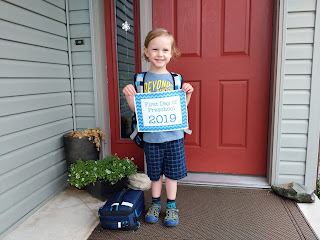 ****
Was a pretty quiet week.  Caroline came to clean on Tuesday.  Thursday night Leah came over.  We didn't work on cards, but she cut my hair for me and we had a really nice visit.  :)
****
Notice Annie's ears?  LOL! 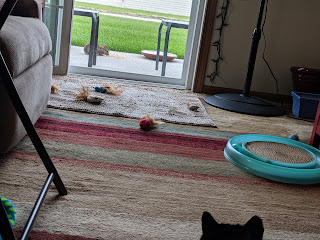 She was watching the now teenage cottontail. 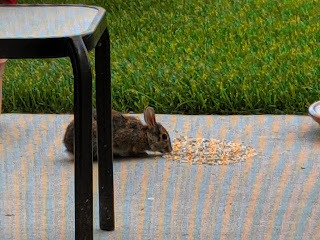 Sorry about the weird screen stripes.  Can't seem to avoid them.
****
Saturday Ian and I had a quiet, cuddly Gramma Day mostly watching Dino Trucks and Mighty Machines.  But when Leah dropped off Ian she had Liam with and they stayed for a little while.  Was the first time Liam interacted with me.  He handed me bristle blocks and talked to me a little!!  Been patiently waiting for him to come around to strangers.  (He doesn't see me too often.)  I even got a bye-bye! 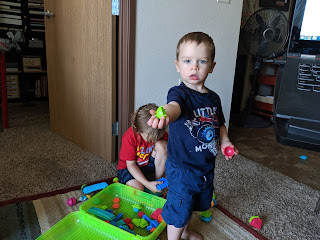 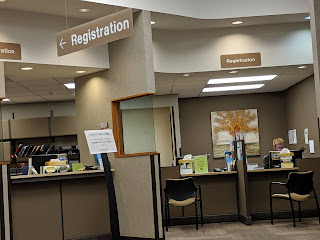 I thought it was funny how everyone in the waiting room was glued to their cell phones.  This was only one corner.  There were half a dozen people behind me...all on cell phones--LOL! 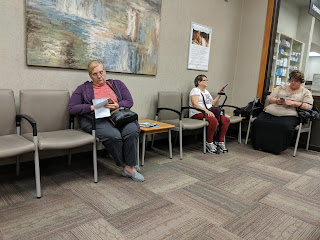 When Leah and Liam picked me up we made a quick trip to the Natural Grocery.  Leah picked me up a few things--aww!  Then they came over here until it was time to go pick up Ian from school.
****
There's quite a shift with Liam all of a sudden.  He's acting more like himself around me.  Talking up a storm (even if I don't understand half of it--LOL!).  A hug was too much, but I did get a bye-bye.  ;) 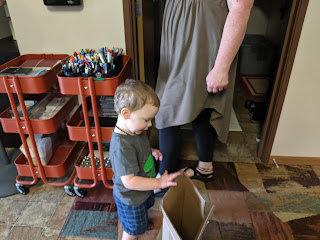 Here's the boys after Ian got home from school on this windy day. 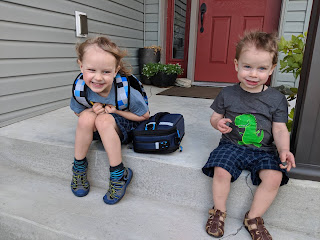 ****
Rained most of the night last night.
We've had clouds rolling through... 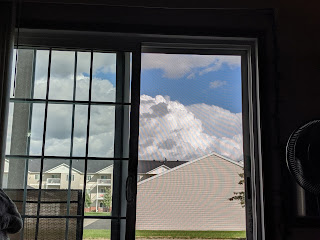 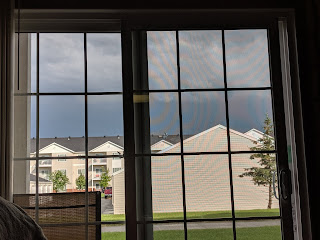 Goodness!  While I was typing this we had horizontal rain blasting down for like ten minutes and then it stopped.  Makes life interesting, I guess--LOL!  Scared Annie, though.
****
Oh, and what did the new GP say?  Dr. Lien put me on a different blood pressure medication that protects the kidneys--or was it the liver?  The only side effect some people get is a dry cough.  I hope I don't.  Anyways, she wants me to come in just for a blood pressure check after I have been on them for a week or two.  She also thinks that I might find out more what's going on with the knuckle-toe mystery when I see the rheumatologist.  Told me that Dr. Blom (I think that's her name) is really smart and a good doctor.  Nice to hear.
****
For my chronic sinus issues Dr. Lien wanted me to use Flonase at night.  But Leah already got me Nasacort which has the same ingredients.  I had been using it for a while but then with all this craziness I got out of the habit of using it before I went to bed.  So, got to start that again, too.
****
Did I like her?
Yup.  She seems like a keeper.  :)
****
Dagan had to go back in to work late and surprised me last night by popping in on his way there to deliver some chocolate mousse type fat bombs and some meatloaf slices where Leah tried tweaking the recipe.  I am so spoiled!!
****
Dagan told me he is now trying Keto, too, as of a few days ago.  The boys aren't on Keto, though.  But they aren't getting as much sugar/carbs as they were.  :)
****
Oh, and I think I lost 8 pounds.
That's a nice side effect.  ;)
****
Other than that, been dealing with getting billing straightened out for all these doctor visits.  Lots of phone time, but things are now fine with my medicaid.  Whew!  Always something, right?
****
I am trying some other things for pain and/or swelling.  Aleve did nothing for me when I was really bad, but now that I'm back down to toe and knuckle it does help a little when the swelling starts to spread.  Using an anica gel for pain and have some anica tablets coming and little round balls you let dissolve under your tongue.  Still using the CBD oil.
****
Both Leah and I have been doing research online for supplements...for inflammation, fibro, arthritis, etc.  Needless to say, I am taking more supplements, too--LOL!  I do like to take natural supplements vs. chemical stuff...but Aleve will probably stay in my arsenal as well as Nasacort and my blood pressure pills, of course.
****
So exciting that Liam doesn't clam up and avoid looking at me or speaking at all around me--whoohoo!  Not that there couldn't be a relapse, of course.  But  looks like he's finally outgrowing that.  He'll be two on September 3rd!  Eight days.  Goodness they grow so fast.  And if he is more comfortable with me then I will finally get to know him!!  Hurray!  Hard to get to know a frozen, silent toddler who won't look at you--ROFL!
****
Well, Annie has ventured out from behind the toilet after the storm whipped up and she ran for the hills.  At least that's where she usually hides for some reason when there's a storm.  The sun is trying to peek through once again and it is time for dinner.  Till next week!  :):)
****
"Let us be grateful to people who make us happy; they are the charming gardeners who make our souls blossom."
Marcel Proust
Posted by Rita at 6:09 PM