Good Morning!
Rita's Bird Cafe has been open all week--LOL!  Loads of partridges... 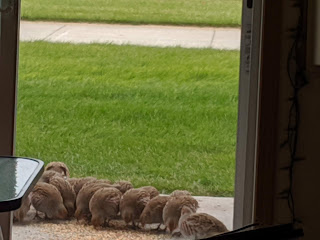 ...and many hungry sparrows as well. 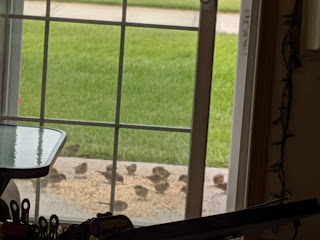 I'm not hanging the bird feeder because nobody really used it last year.  The small birds are the only ones that can use it and they prefer eating on the ground en masse rather than only a few at a time squabbling over perches at the bird feeder.  That's fine with me.  :)
****
Leah dropped off the IKEA table with the adjustable taller legs... 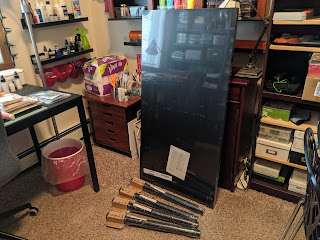 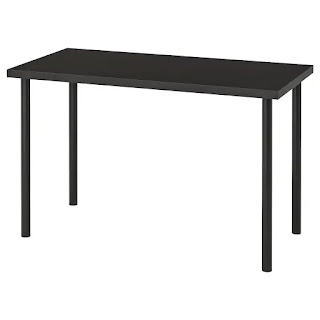 ...and four sets of dividers for the cabinet drawers... 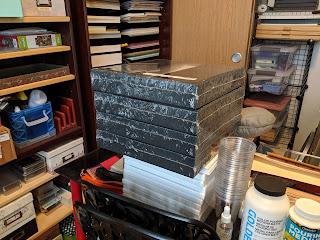 ....that will fit perfectly in the Alex cabinets when we get them. 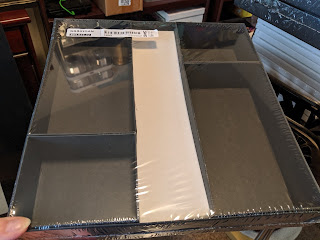 And she brought in the gatefold table... 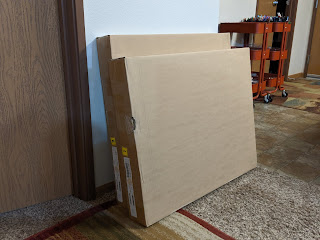 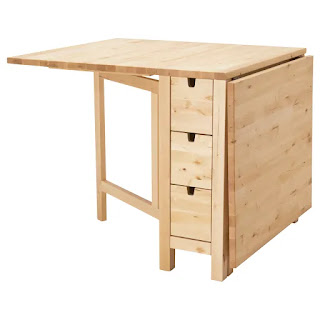 ...and will sit right where those boxes are now.
Whoohoo!!
****
It could be a while until they are actually put together because they've been busy moving her brother, Aaron, to an apartment near downtown Fargo this past weekend.  No rush.  Just getting these pieces here from Minneapolis is something exciting.  Leah said they are planning to try to get back down before the snow flies to pick up all the cabinets for me.  They think they will all fit in the next trip!!
Awesome!!!
****
Been chilly to downright cold (right now it is 29 degrees) so I can only crack open the patio door here and there.  Any time I do Annie is right there to check out the Bird Cafe--LOL! 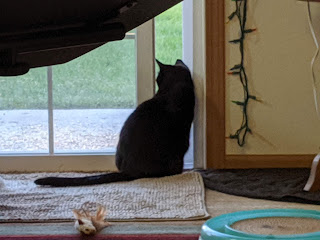 I'm still amazed to see such a huge number of partridges at once. 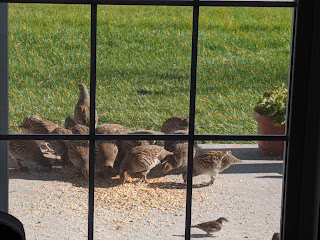 Remember when I saw all those babies running across the lawn this summer?  Maybe these are those very babies?  Those sets of parents seemed to be raising them all in one big group so who knows, right?  And there's a smaller covey of around eight that come by.  They may be larger...or it's an optical illusion.  Could be I am feeding two coveys (was last year and didn't know it till I saw both at once)...or there's a group that splits off to come by themselves.  Regardless, I welcome them all.  :)
****
The early snow has thrown off those three trees. 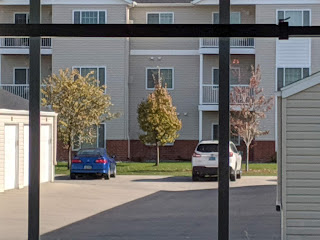 No casual leaf turning one at a time right to left this year.  For the first time the other two are turning together.  In fact the one on the far left seems to be winning the race.  I guess being dumped on by early heavy snow has changed the routine this year for the first time in the four years I've been here.
****
I ordered a little Dash waffle maker to make chaffles. 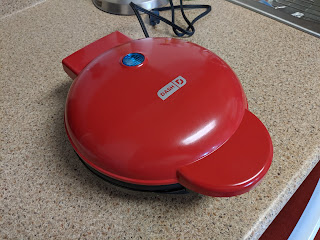 Chaffles are keto-friendly waffles made with just egg and cheese--nothing else.  Well, you can add meat if you wish.  I have never owned or operated a waffle maker so I had absolutely no idea what I was doing--LOL!  Let's just say that I totally miscalculated and had a big mess oozing all over the counter top the first time I tried it--ROFL!  But now that I got the hang of it--love them!
****
Another of the cheap dies came: Merry Christmas. 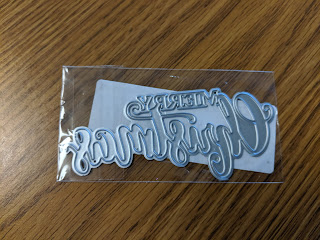 There are two left to arrive.
****
I made a regular Simon Says Stamp order, too.  (Can you tell I have craft studio on the brain!)  You know how I love bright rainbow colors...well, I saw this stamp and immediately saw hours of coloring ahead of me.  ;) 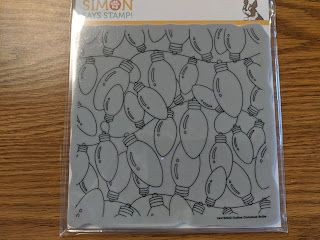 They also had this mailboxes stamp and die set that I couldn't resist with all the folks I write letters to.  So cute! 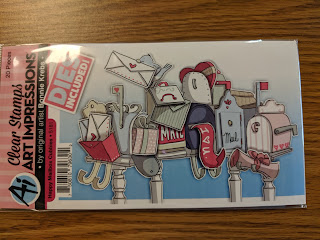 Now if I would just feel well enough to actually work on some projects...*sigh*
****
The last two weeks I have been dealing with allergies--the watery-itchy eyes, stuffed up head, and runny nose that makes it hard to sleep well.  So I'm feeling kind of run down.  *she says as she sneezes and wipes her eyes*
This too shall pass.
****
On Thursday I saw Dr. Blom.  The good news is that all those 34 tests came back just fine.  So still nothing definitive, but she has a general idea.  I do have Osteoarthritis so it could be an OA flare of some kind.  I also could have developed an Inflammatory Arthritis.  There are several kinds of IA, including Rheumatoid Arthritis--but, again, that is almost always symmetrical and my blood work said no so it unlikely I have RA...but there are other IAs.  And nothing explains the entire leg swelling up.
****
If I am presenting an Inflammatory Arthritis it could slowly disappear (never to be seen again, hopefully) or I will see it showing up elsewhere.  She asked me if I have seen people with the gnarly-lumpy-stiff-jointed hands, for example.  Could show up in other knuckles or finger joints or toes.  Don't really know.  One of those "time will tell" situations.
****
I could have had a steroid shot in my knuckle, but I passed.  I had a kind of extreme reaction to the shot in my knee and then being on steroids felt so exhausting...I couldn't imagine dealing with any of that again right now.  Besides, I have gotten back 80-90 % of the use of my hand (depending on the day) despite the swollen red knuckle.  I have adapted to pain.  After all, I've had a lot of practice--LOL!  ;)  If it is still the same in three months...I'll try the shot.
****
Dr. Blom was behind schedule that day so a little more rushed, but she still pulled her chair right up across from me and looked me in the eye when she spoke to me.  I really like her.  She put me on a prescription anti-inflammation medication (meloxicam), said it was slow to work (if it does), and she wants to see me in three months.  This medication is once a day and a bit stronger than Ibuprofen or Aleve but not as hard on the stomach...but still take it with food.
****
We talked briefly about diet.  I told her I do feel better on the low-low carbs but am also suspicious of dairy because of the chronic sinus issues (nothing to do with the allergies where I was wiping my eyes while I was talking to her--LOL!).  She said she'd had chronic sinus, herself, until she gave up dairy.  But she found she can eat a small yogurt a couple times a week and not have any issues.  Each person has to listen to their body and find out what does and does not work for them.
****
So, my "diagnosis"...
****
...some kind of arthritic flare.  Time will tell.  Keep doing what I am doing.  I told her I plan to work up to giving up dairy.  I go back end of January...unless something additional pops up, of course.
****
Then Thursday night Leah came over but we didn't do any crafting.  I filled her in more on what Dr. Blom said and she filled me in on how Dagan's visit with the liver specialist went...and that Aaron was moving out on Sunday.  Was a nice, sitting at the table, chatty night.  :)
****
Dagan hasn't shown any signs of liver problems but apparently it is a common issue for people who have had the fontan procedure.  And that's definitely not good.  Let's just say that you wouldn't qualify for a donor liver with a bad heart...and you wouldn't qualify for a heart transplant with a bad liver.  So you would have to have them both at once...or nothing.  So they are just being proactive.  Dagan has been doing so well for so long where so many others haven't.
****
So, Dagan will go in for bloodwork and a liver scan up here in Fargo.  They will keep an eye on him.  So far, so good.  We are expecting the best.  :)
****
Meanwhile, Annie and I have company every day. 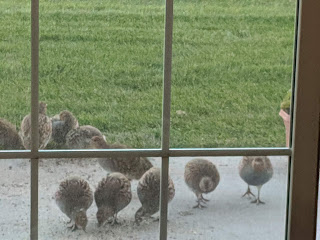 The covey has gotten so comfortable here that, if I don't walk around or Annie doesn't try to scare them, they hang about sometimes on the lawn and come back for more helpings.  Love it! 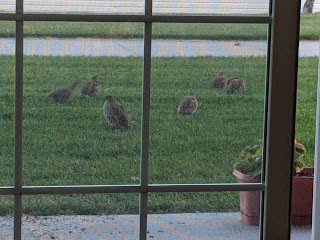 ****
When Ian was here on Saturday for Gramma Day he threw out some seed for the birds and later the big covey came.  We counted 20 of them!  I was glad they came while he was here so he could see them all.
****
We had a great day.  He read to me from his school homework books.  He brings home a pouch full of "books" that he has to read to someone.  Leah sent me a short video of him reading the "a" books to them.


He was so excited when he got here that we did that first thing.  He read me the "i" books and I got to sign the form for him that he had read them to his Gramma.  He also read me the Mog and Me book that he brought with.  We put out bird seed, watched some DinoTrux... 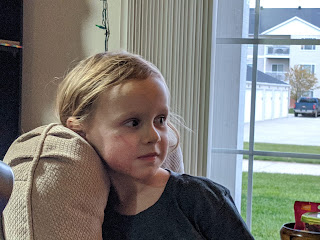 ...made chaffles with diced ham, and chatted away.
****
He did look tired to me and he "rested" lying down in the chair for a while while he watched TV. 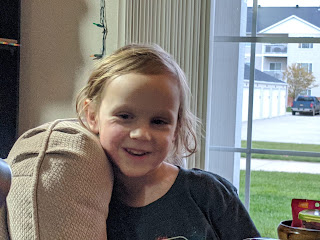 He still has that rash on his cheek and they're going back to the dermatologist.  Ian seems to have a mystery disease, too.  We had a good day and he was extra huggy saying goodbye and even gave hugs to Mama.
*****
BUT...
I guess he's been acting out after Gramma Days the last couple times.  :(  Been good here, but then throwing tantrums afterwards at home.  Not a one-off...and not acceptable behavior.  So, no Gramma Day next week.  He might have one the week after that--but he'd be on probation.  We'll see how it goes.  Ian has always been easily frustrated, often automatically contrary, and crumbles easily.  But he is also helpful, kind, charming, silly, and loving.  Growing up is hard work.
****
With everything going on I forgot to ask Leah what the Halloween plans were for this year...if they need me to hand out candy, I mean.  Meanwhile, I had a bevy of sneezes while I changed the clothes to the dryer, AnnieGirl thinks I have spent entirely enough time at the table typing (it's almost 2:30pm), and I think I have about covered the highlights for the past week, anyways.  Time to go.  I will try to be better answering comments this week.  Allergies have been dragging me down.  With it being so cold now you'd think that wouldn't be an issue much longer.  I hope I don't have to wait till the snow returns and stays on the ground--LOL!
****
Have a sneeze-less, productive, exciting week, my friends.  Bless you all for hanging in there with me.  Been a rough several months, but things are going better and I expect them to continue to get even better.  We'll chat again next week.  :)
****
"This universe is much too big to hold onto, but it is he perfect size for letting go."
Sharon Salzberg
Posted by Rita at 2:33 PM