Good afternoon!
Had a roller coaster sleeping pattern for a short while last week.  No clue why.  Tuesday night I slept 2 1/2 hours, Wednesday 11 1/2, Thursday 2, and then Friday 9 1/2??  Seem to be back to my usual 7-8 hours again now, but that was weird.  Reminded me of menopause--LOL!  Anyways, hopefully I'll remain back on track now.
****
On Tuesday I did have a burst of energy from out of the blue.  I did laundry, worked on the bullet (February headers)... 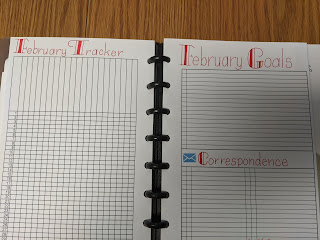 ...and addressed all the birthday card envelopes for 2020. 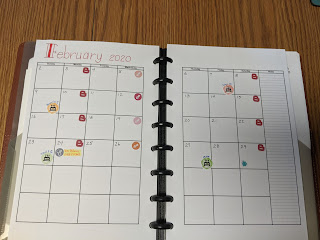 Caroline came to clean in the afternoon and she told me it was the federal government that changed the leases.  I have never heard of any rental place changing a lease date so I suppose that makes sense.  They have their mysterious reasons.
****
I also made up some meat soup for Annie. 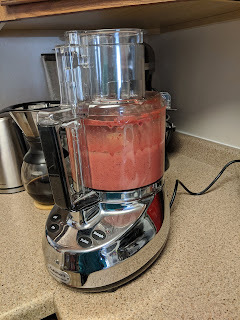 She prefers the all liver variety where I use beef and chicken livers. 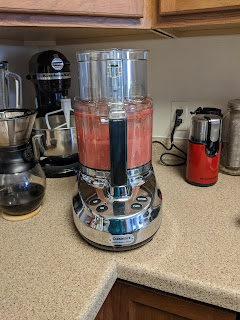 I also made some that was chicken livers and boneless chicken thighs but she's not as crazy about that one.  Might be because it was quite a bit thicker. 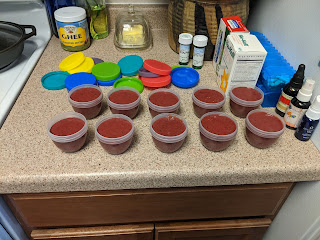 I also got her some grain-free canned cat foods that she seems to like.  The things we do for love, eh?  LOL!
****
Leah came over Tuesday night for a craft night.  We worked on some simple cards.  I needed some easy ones for Christmas thank yous,,, 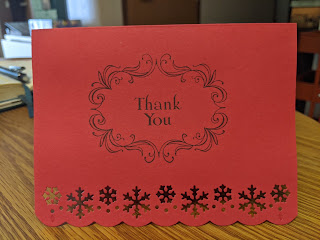 ...and Leah made a few teacher cards.  We have such a good time!!  Won't have a craft night until January.  Will likely start putting the studio cabinets together.  Whoohoo!!  :)
****
The rest of the week...
I worked some more on the new bullet journal. 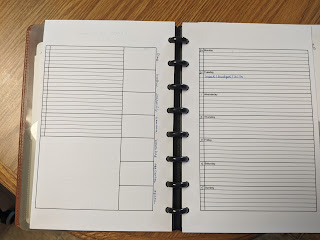 Wrote in 365 days of doodle prompts! 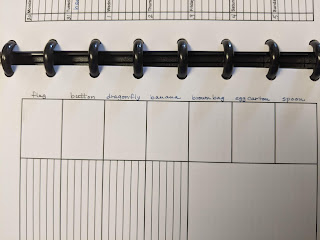 ****
Yesterday Dagan and Liam stopped by to pick up a bag full of stuff I had for Leah.  Dagan shoveled off the patio for me while it was still just above freezing so he could get down to the cement. 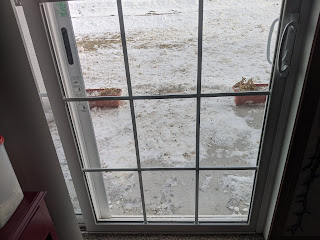 Although you'd hardly know it because it did snow some last night and there have been rabbit and partridge parties night and day.  (Poop is always the evidentiary, telltale, dark evidence--LOL!)
****
Today...I had to deal with missing prescriptions.  I called last Wednesday just to make sure they were sent since I was going to be out on Sunday.  Nothing by Saturday, so I tried to call twice and no answer.  This pharmacy is connected to the hospital, so maybe they aren't open on the weekend.  So, called this morning.  Turns out they had only filled the anti-inflammatory one...and the post office had "forwarded" it to another address because I had moved.  ??  So that one is still wandering around the postal system somewhere.  (Not too concerned as I haven't noticed that it has done much of anything and already was considering stopping it to see if my KT situation got any worse.)
****
The lady at the pharmacy said that our postal service has been just awful this year.  They've probably hired some extra help that doesn't know what they are doing or something.  She said they had some prescriptions sent to other states!!  Just crazy!
****
And in the meantime--my new doctor (GP that I liked) has left.  No one at the clinic responded to the pharmacy about the refill.  They didn't contact me or the pharmacy about the refill or that I needed to pick a new GP.  So they hadn't filled my BP medication at all.  At least it wasn't floating about the country...wherever they think I moved to.  (Makes me wonder if I have gotten all my mail??!!)
****
Since it's the holidays and all, I don't have a car, McFamily is leaving town for the holidays, and I will probably need to meet whichever new doctor I pick before they will prescribe BP pills--she said she'd have enough to get me through the holidays and Dagan could pick them up for me today.  Awesome...
****
...except when I contacted McFamily...Leah and the boys were all sick last night and this morning.  Throwing up and nauseous like a food poisoning or something, but Dagan didn't get it.  So, since I started writing this...Dagan came by to get my pharmacy card, took out my trash for me, came back with my pills and he picked us up some lunch!!  We ate and he stayed for a short visit.  :)
****
Oh, and the nice pharmacy lady gave me 30 pills instead of just a few to get me through to beginning of January!  Awesome.  Now I have some time to decide on a doctor and get in for an appointment--whew!  She was really nice and we were laughing about our crazy post office.  I'm glad she did me a solid.  ;)
****
Sick or not, Leah's going to be making cookies today because she had chilled dough.  She and her sister, Michal, usually get together for a cookie baking day.  Instead they will each make cookies at home and they'll do a swap afterwards.  At least she can go at her own pace and nap, etc.  She sent me a picture of Ian... 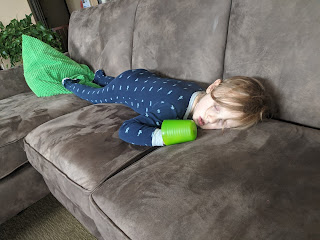 ...who couldn't even stay awake to watch Wall-E with Liam.  (He loves that movie.)  They'd all been up since 4am...vomiting was involved.  And they are due to set off tomorrow morning/early afternoon.  I hope they all feel lots better tomorrow.
****
Annie and I will definitely cuddle up on my chair and watch It's A Wonderful Life and A Christmas Story.  I don't buy movies but I do have those two and try to watch them every year.  Merry Christmas, everybody!  Happy Holidays!  Next time we chat it will be almost New Year's Eve!  Wow!  Very, very best wishes to you.  :) :)
****
"Life is not about "or"--it is about "and".  It is magical and messy.  It is heartwarming and heartbreaking.  It is delight and disappointment.  Grace and grief.  Exquisite and excruciating, often at the same exact time."
Kristi Nelson
Posted by Rita at 3:11 PM

Hi Rita. You sure got a lot done. Hope you have a very Merry Christmas. So sorry to hear that McFamily is sick. Hope they are much better soon! Doctors and prescriptions - all very frustrating. Have a great week and I will see you again soon.

Wow, Rita, I had to laugh at your post office and the missing pills. Your pharmacy really DID do you a solid. At least you are sleeping again, not roller coastering.

Goodness, McFamily sounds like they are in a horrible condition. Good thing Dagan was not sick. I feel for Leah and the boys, though. Hope they are better in time for Christmas and their trip.

Merry Christmas to you and Annie from Bleubeard, Squiggles, and me. Cuddle up with your favorite movies and have a wonderful time. Stay safe and hopefully healthy.

Merry Christmas! Hope everyone recoups from the tummy troubles...I hear that some stuff is going around. Hope you have a good week! I am loving this weather!!

I am sorry to hear the family is sick. I hope they all heal quickly and are able to enjoy their holiday. I understand your problems with prescriptions - somehow they can get in a real mess at times. I hope you and Annie have a peaceful and relaxing holiday!

Annie is one lucky cat to get homemade soup. I'd better not let my cats hear about this. You're certainly keeping busy, which is great, but I'm sorry to hear that your family is sick.

Much like you, I plan to snuggle up today and watch holiday videos. I also plan to bake a cake (that's a milestone for me, since I'm lazy). Take care and have a great Christmas.

Sorry to hear McFamily is sick, but I sure do hope you don't get it. Sleep cycles come and go, and yours is just a little more dramatic than most. Merry Christmas, dear Rita and Annie! :-)

Annie is so spoiled! What a lucky soul she is :) I'm sorry to hear the family is sick but happy Dagan was spared. It's odd that no one notified you that your doctor had left. You'd think they'd want to assign you to another one. A Christmas Story is one we re-watch every year. Back in the day we bought a lot of Christmas DVDs, but since the internet became such a part of our lives I've started finding things online. I'm making way to many pies and cakes today lol It's not like there'll be many of us here, but I was in a mood :)

Happy Christmas Eve to you and yours! "Just one more sleep 'til Christmas Day"!

Just popping in to wish you a Happy Christmas! You certainly have been busy! I've been having unusual sleep patterns too but considering we kept swapping beds so much by going up to the caravan it's not surprising! So sorry to hear about Leah and the boys - I hope they managed their trip! Enjoy your films! For us it was Home Alone and an episode of one of our favourite comedy shows! Enjoy your Christmas Day! Chrisx

Hope your McFamily feels better fast!
Stopped by to wish you the very merriest and happiest day with many wonderful things to come in the New Year!

Good morning Rita - bit slow in visiting - glad Caroline knew 'why' the leases were all changed to January 1st. You accomplished a lot this week. Hope your McFamily is feeling better each day. Good of your pharmacist to provide enough pills since the RX's seem to be having a mail mix up.
Hugs.
Joy

Oh, I hope that McFamily got off on their holiday visit. Isn't it just the way that people always seem to get sick at Christmas. So glad you have got your medications through to Jan, nice people at pharmacies and doctor surgeries can make all the difference. Annie is a lucky cat, with all that loving home cooking for her benefit, but then it IS Christmas.... I hope the rest of your week is calm and contented Rita and that McFamily come back with some nice memories.

Hi Rita..There is so much sickness out there right now! Hope you don't get it.
Sleep is elusive...some nights good....some nights bad. Only matters when I have to work in the morning! Happy New Year Rita❤❤❤❤❤❤

Those are both wonderful Christmas movies. You can't go wrong with either of them. Sorry to hear that McFamily was sick. Ian looked so exhausted on the couch. :(