Good afternoon!
First of all, before I forget...the pills did arrive after a few days and only had my address on them and nothing about being forwarded.  ??  These are the ones that were supposed to be helping with inflammation that I've been taking for two months.  I decided to not take them for now because I don't think they are doing much of anything.  I took pictures so I can compare later.  But I don't see much difference over the past several months.  See--looks about the same as it did 2-3 months ago to me. 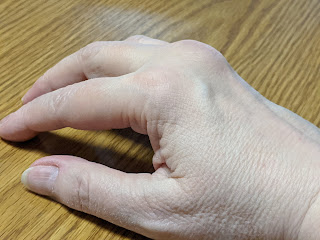 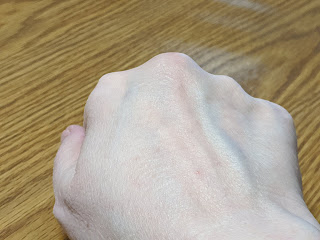 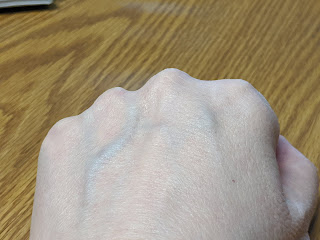 So, we'll see if it gets any worse over the next few weeks.  I don't go back to see her until late in February so that gives me time to check it out.  If it gets worse I have the prescription I can start taking again.
****
[I did take toe pictures, too, but I won't subject you to that--ROFL!!]
****
McFamily made it to the AirBNB near Henning for Christmas.  Ian got better right away.  Liam and Leah were still sick for a few days, but they still made it outside to play in the snow, Leah said.  (Flu?)  They got home before the winter storm up here started.  Perfect timing!
****
Whenever we get together for our little Christmas I have the presents wrapped in the paper that mostly Dagan and Ian made.  :) 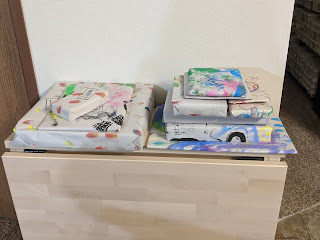 We usually have our Christmas the beginning of January some time.  No rush.  Need everybody well and the streets drivable--LOL!  :)
****
Meanwhile...my dear friend, Serena, told me about cat videos.  I can't believe that I had never known about free cat videos on YouTube before this?!  So Annie Girl got her best Christmas present ever!  Calm or relax your cat videos or just plain videos for cats...have found a few channels. 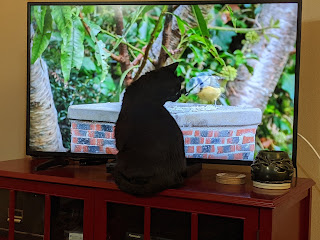 She's never shown any interest in the TV and has never jumped up on the TV cabinet before!  At first she vigorously tried to catch them, but quickly found out that was a futile effort.  I took this video after about an hour of her intoxication.
Annie LOVES her genuine CatTV--LOL!
****
Annie was not the least bit interested in It's A Wonderful Life and A Christmas Story when I watched those over Christmas.  She slept through them.  ;)
****
It was a quiet week.  I caught up online and almost caught up on letters and thank yous.  I watched a few movies that Netflix was going to discontinue soon, season three of The Crown, and a bunch of stuff on YouTube(that wasn't cat videos--LOL!).
****
On Friday I believed the weathermen who said a storm was coming in that night (McFamily drove home that day) because, once again, I saw the jackrabbit twice in the daytime...and the birds were here off and on all day filling up before the bad weather.  They're always suddenly starving before the weather turns.  :) 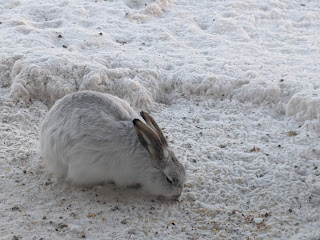 Annie no longer cared about the old real critters--LOL! 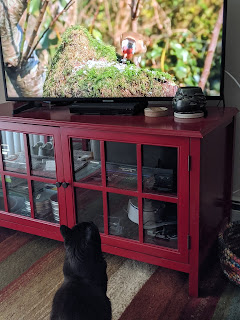 Saturday it snowed all day but it was a beautiful, fluffy, sticky snow without much wind.  Enough to show you which side the wind was coming on the evergreen across the way, though. 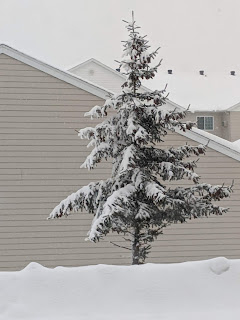 The covey always gets scared when I open the door to throw seed so they stayed nearby... 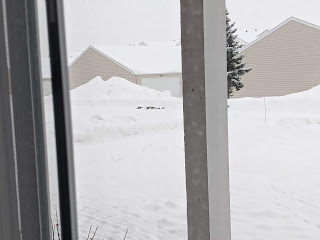 ...where they could watch from a safe distance. 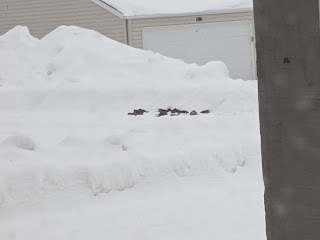 Then they'd come running over to fill up--LOL!
****
Annie was more interested in the new birds, squirrels, chipmunks, and voles on TV. 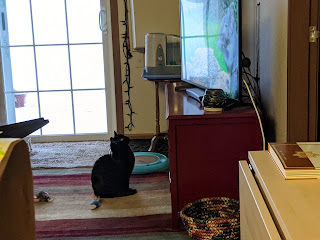 She would sit like this for an hour or two at a time. 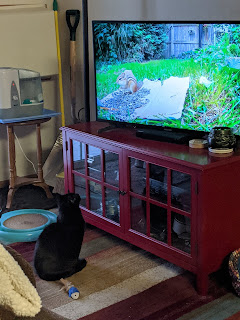 ****
By Sunday we woke up to a blizzard.  The sticky snow had plastered my patio door and screen so I could barely see out.  But who was there digging for seed? 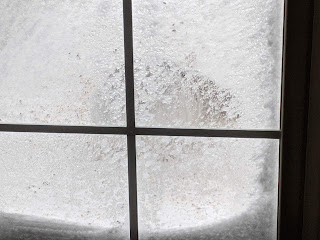 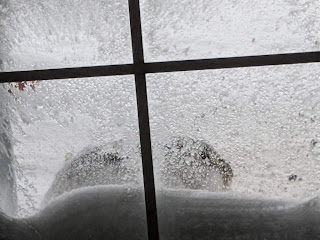 I no sooner got the door cracked open (not an easy task) to toss out some more seed than the covey was right there.  They had been somewhere close by waiting.  I barely got the door closed--LOL! 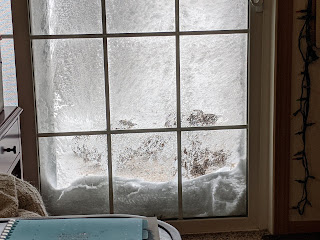 The partridges know to dig down into the snow for more seed, too.  I get such a kick out of watching them dig deep holes because they know there are buried seeds down there...and the sparrows quickly gather to catch a few of the unearthed treasures they can't reach.  Thought I'd share a video.
****
Meanwhile...I now have an Annie problem.  She sits like this in front of the TV and cries until I turn on her CatTV for her!  She complains a bit when I want to turn on the TV but, to Annie's dismay, it is for something I want to watch--LOL! 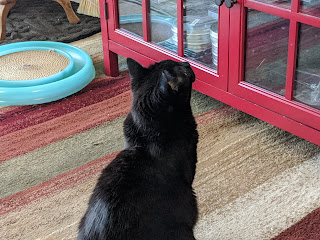 At this rate she is going to need her own TV--ROFL!
****
This morning...the storm has passed and the human digging out begins. 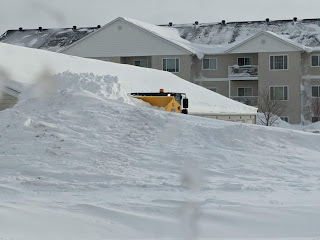 The plows are out building high snowbanks. 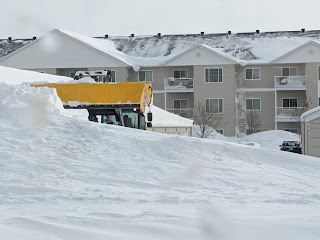 They're above the tops of the garage doors. 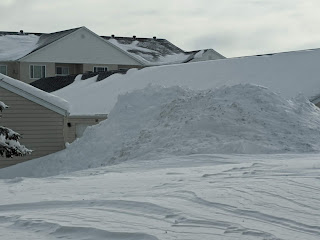 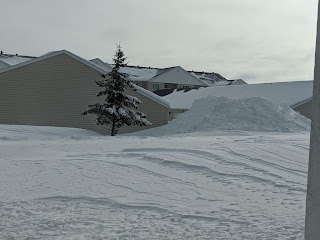 ...but there is ice underneath it all.
****
The wind funnel in the yard by me kept me from getting a huge drift this time... 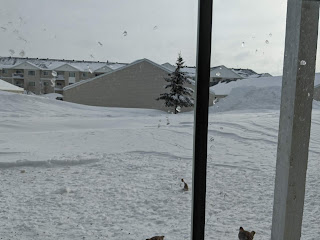 ...even though my planters are buried. 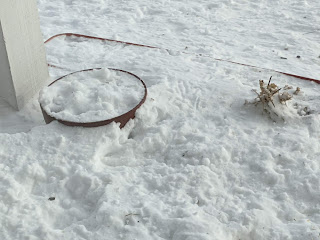 We got about a foot of snow, I guess.  I don't know if that was altogether or just during the blizzard.  Doesn't matter.  It is very white out there.  And the covey is delighted to visit Rita's Bird Cafe... 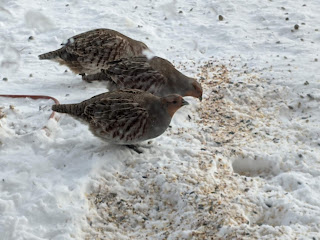 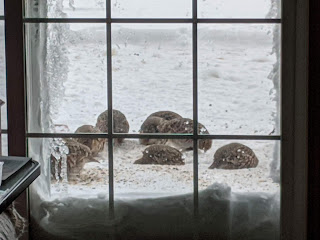 ****
The dryer is going.  Annie is watching her CatTV, of course.  2020 is almost upon us.  I do plan to get out my angel cards and burning bowl for New Year's Eve this year to welcome in the new year properly.  (Knock on wood--last year I got sick or felt awful or something as I recall.)  Wednesday I plan to start on the weekly calligraphy classes.  Friday I plan to start a Questions Day blog.  Wish me luck.  I hope this is a better year and I can pull this off as something I can stick with.  I'll give it my best effort.  :)
****
To all of you--you have added so much to my life and helped me get through 2019.  Life is good.  Think positive.  Laugh often.  Try something new.  Keep smiling.  Hug often.  May 2020 be a special year filled with good things and much love.  :) :)
****
"There are far better things ahead than any we leave behind."
CS Lewis
Posted by Rita at 3:26 PM