Good morning!
Well, first off...I was able to read every word of each of your comments but this time after I posted them to my blog none of them showed up in my inbox so I could respond to you.  And I have been in and double checked my settings like six times...should be working.  Well, I can comment on your blogs...so far--LOL!
****
I know I could go back to how I did it years ago and comment publicly on my blog.  I don't know if I remember how, could figure it out, but don't really want to, to be honest.  I have just really preferred a private email conversation...for years.  I know a few of you always respond with a direct private email instead of the public comment on the blog and that's great!  The comments that come to my inbox after moderation--well, I don't actually get an email address.  It's through Blogger somehow.  But many of you have connected via email in the past and so we know we won't lose touch no matter how Blogger messes with us--LOL!  And some of us have connected via snail mail, too!  So--if you don't want to lose touch feel free to email me soulcomfort (at) gmail.  And any of you who would like to do snailmail...let me know via email.
****
I have padfolios that I set up for letters.  Each one has a letter I shall answer and I pick out paper and an envelope and address it...so they are ready to go.  I think there are ten here right now.  (Much easier to reach them and my pens when I am settled into my chair with my lapdesk now that I have lazy susans everywhere--LOL!) 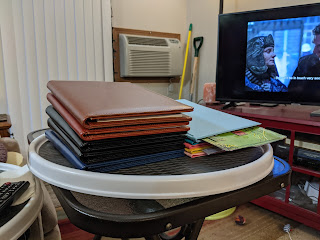 I may be slow to respond (quite often), but maybe you can see why.  I do love sitting down for a quiet, personal, paper-chat with each of you.  Thank you for being so patient my snail mail friends.
****
Anyways, back to the past week.  I made Halloween cards for the boys and a sympathy card for my BFF from high school's mom.  I moved all that furniture to the garage.  Made room for my old end table.  You can see the indentations from where the feet were on the red end table--hardly any room between it and the patio blinds.  (Sorry about my finger in the corner of the photo--LOL!) 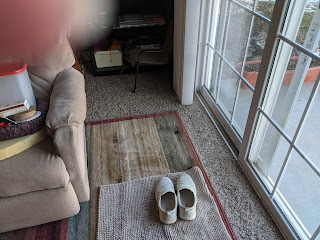 It looked like this one on the other side of the room by my big chair. 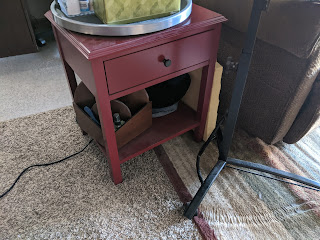 Leah dropped off the old oak end table on Tuesday.  Look at all the room I have now!  Much easier to open and close the blinds, I tell you! 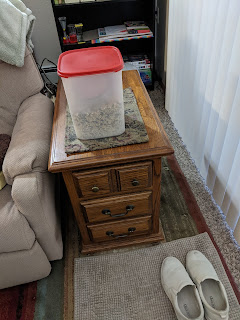 The bottom two out of the three drawers are filled with cat toys--LOL!  ;)
****
Also on Tuesday I had our video call with Leah and--the big news--Ian lost his first tooth! 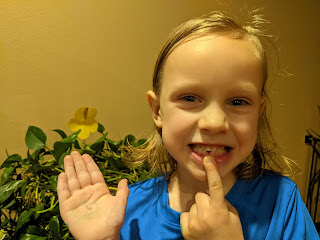 A bottom one in the front.  He tucked it into a little pouch for the tooth fairy. 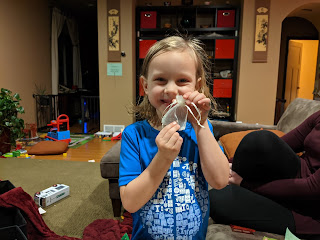 On Wednesday I got a video call from the boys.  Ian wanted to tell me all about it and show me his golden dollar coin from the tooth fairy!  So exciting!  I read more of The Seventeen Little Bears (that was my mom's when she was little). 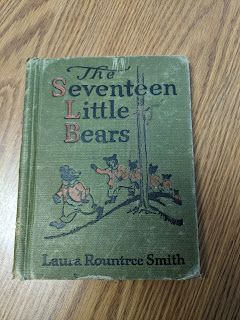 Looks like it was quite well-loved.  I think by me, too, as I vaguely recall.
****
We also call it the old-timey bear book.  Fun to explain how a family could have 17 children in the first place.  And how the kids used to take metal lunch pails to school... 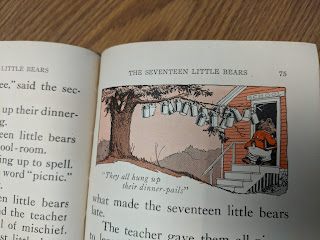 ...and how when people went into the small shops they really used to leave their babies in the carriages outside...and that's how the baby bears got switched while papa bear was inside the post office. 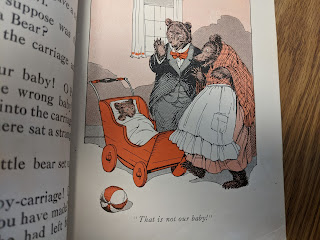 The two papa bears got the right babies back.  Men always wore jackets and hats when they went outside.   Women wore dresses and aprons.  (I remember my grandmother's did.)  Times have changed in almost a hundred years. 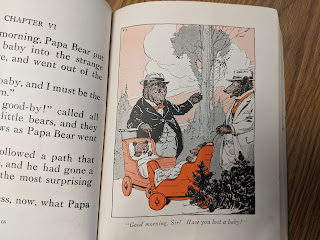 We have three more chapters to go (and the baby bears have been switched by accident twice!).  Goodness!
****
I've talked to my mom a couple of times.  One of the hospice nurses tested positive and had seen Mom, but she's feeling fine so far.  That's the only case we know of and the nurse had no symptoms.
****
On Thursday Leah and her brother Aaron went to Costco and Leah picked up Ian's work for the month at the school.  Groceries were dropped off in the parking lot--masks and distancing.  I did laundry and worked on Christmas presents for the boys to order in November.  This year it is board games!  :)
****
Friday I set up the bullet and finished with a master list of supplements to take and when that is now on the frig.
****
Critter Cafe is always busy since it's been so cold.  But it has all melted away and now this week they're predicting 50s and 60s!  A couple days ago they were saying 40s and 50s...so even warmer.  After freezing cold and snowing 4-5 times...will be quite the change this week. 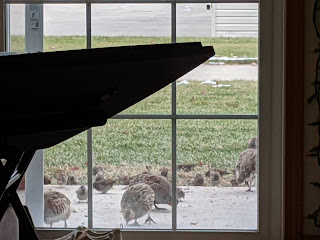 ****
Saturday I did the banking for the month.  Amazon has been awful the past two months.  I have ordered from them once a month for years and never had any problems.  The last two months they have been subtracting amounts and adding back in amounts--many of them!?  When you just have a total for one order of several items...well, I could just add up all the Amazon charges and it would come right to the penny.  Even when I ordered all the household and personal goods, etc, with my stimulus check.
****
Now it is suddenly such a chaotic mess that I can't tell what is going on.  All I can do is add up the totals of what they have added and subtracted and see if it matches mine.  Doesn't--but the bank says I have ore than I know I do so I will wait and see how this goes.  I thought September was a fluke, but October was worse.  Example: $9.04 taken out, added back in, and taken out again.  There were four different small amounts that were taken out and added back in...and then others added back in that didn't match a single amount--just a total mess.
****
I have decided that I am ordering one item at a time.  Separate orders.  Then I will have specific amounts I can track.  Good grief.  Amazon may not like it but it's their own fault and I pay for Prime...so that is what I plan to do.  Not sure for how long, but I need to be able to track my limited funds closely.  Has anyone else seen problems with Amazon and your banking lately?
****
Blogger...Amazon...DVD player is dead...
****
But...the good news!  Leah brought the DVD player back to Costco on the chance that they'd exchange it.  Don't have the same one anymore but they gave her a refund!!  So I'll have to order a new one.
****
And Halloween pics made me smile.  Liam and one of the carved pumpkins. 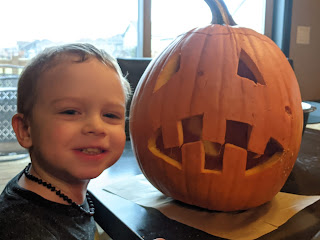 I thought this was so clever!  Leah strung glow sticks across the yard by the sidewalk and made a sign to help themselves. 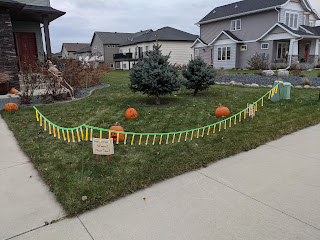 Ian and Liam didn't go trick or treating this year.  But others did in their neighborhood...so that was a great solution, I thought.  :)
****
Sunday my pill boxes arrived.  I ordered two sets of one week rainbow colored AM and PM pill boxes. 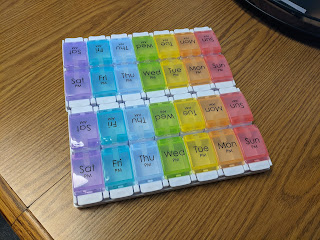 I need to have various supplements & vitamins four times a day eventually so this is the way I decided to do it.  Easier than trying to keep a tracker on paper for breakfast, lunch, dinner, and before bedtime pills.  I just needed to make a master list for when I set them up each week so I can keep track of which new pill is added as I test them out.
****
Since Leah just got the supplements, she dropped them off late last night and I am setting these up today.  No rush, as the first thing I am adding is actually not a pill but flax meal to my eggs.  [Manageable, but not a big fan.  She wants me to try to take 2-3 tablespoons a day--and I probably only added less than half that.  Going to take some getting used to--LOL!]
****
Anyways, I tried adding this video through the new link on Blogger but I can't tell if it is going to work until I post this.  If it doesn't work I will go back to using YouTube.  Regardless--this is something Google made for Leah--I know they do random things that pop up on your phone with pictures--but I have never seen anything like this!  Have you?
****
Well, that's it for this week.  I didn't get as much done as I had hoped to, but that is nothing new--LOL!  It was a very nice week, despite the frustration of things not working right.  Maybe my election anxiety is sending out bad vibes to my very apartment and its contents...
****
...if so you'd never know it by Annie.  She's been happy and doing great. 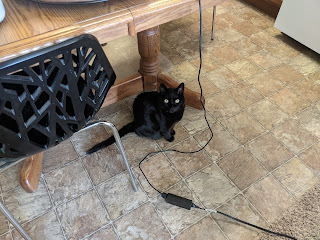 (Just to add to the frustration...that, by all cell phone appearances, was supposed to be a closeup--LOL!)
****
Time to try to get the paragraphs and pictures centered and the random space gaps closed up if possible...to see if adding a video works this new Blogger way...post the video on YT if it doesn't...and then call Dagan to wish him a happy 46th birthday!!!
****
Till next week!
Thinking positive!
Those in the US, be sure to vote if you haven't already.
****
"Imagine a country whose citizens--maybe even its leaders--are brave, calm, and open towards each other; a country whose people realize that all human beings belong together as one family and must act accordingly; a country guided by Common Sense."
Br. David Steindl-Rast
Posted by Rita at 1:40 PM