Well, this will be a short one.
The partridges are around regularly again. 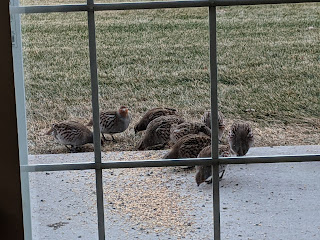 Been cold.
It's 25 degrees right now.
****
Leah came over Tuesday night for the first Craft Nite in many months.  I became really stuffed up that day.  We worked on the Christmas cards. 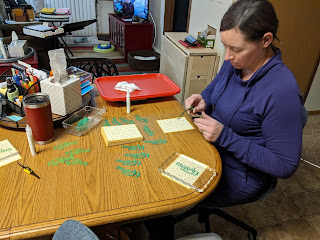 We were gluing the die cuts on to the fronts and pressing them under the red trays. 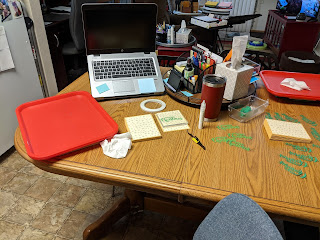 Finished them all!!  Thanks to Leah doing a lot more faster than I can. 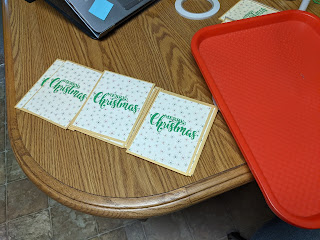 Then Leah tried to set up the DVD player and it didn't work with my TV.  Was on older model, I guess.  (No wonder it was so inexpensive.)  So have to send it back and order another one.  Leah and I had such a nice evening.  Been so long!!
****
But...
by the time I woke up on Wednesday I was feeling worse.  Head totally plugged up, headache, and even took a nap.  Finally took my temp and was running a very low temp of around 100.  So, I got ahold of Leah to warn her.
****
So--no first actual Thanksgiving in 21 years for me.  And now Leah's grandparents and brother are afraid to come over...so I was feeling like I had ruined Thanksgiving for everybody.  :(  But if they want to quarantine from the day Leah saw me for two weeks they could have it on the first.  I'd hate to see them miss out because of me.
****
I have had no trouble breathing--except for a snot-filled head--LOL!  Had the low temp till during the night on Thursday night (couple of days).  Sinuses are better.  Feel better...just tired and draggy.  But that is absolutely normal for me after being sick.  Caught up on laundry yesterday.  Never seemed to have any typical covid symptoms...but it is disconcerting that I even got sick at all when I am wearing my mask and washing my hands and have only seen McFamily the week before and they're not sick.  Just proves to me that I am one of those vulnerable people, I guess.  I mean, I know I have a compromised immune system with fibro and all...but this drove the point home, I guess.  :(
****
I got my card in the mail from the boys. 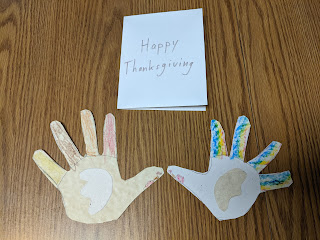 Sadly, even quarantining for 5 1/2 weeks before I visited them and Leah came over here...I somehow got sick anyways.  :( 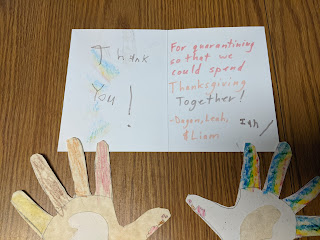 I really hope they can get together for Thanksgiving after all.  Leah's grandpa wants me to get a covid test...but unless you have symptoms or have been exposed to someone else I'm not sure you can even get tested here.  And then that would be more exposure just to go in for the testing.  So, I think I am going to call the clinic just to question them about symptoms.  A phone visit.  Just to make her grandparents feel better.  Unless I take a turn and start to feel worse (which isn't impossible) I think I just had some regular old sickness.  I'm waiting out another 14 days to see what happens.
****
Meanwhile, I got a phone call from Caroline's boss on Thursday.  I am losing Caroline.  I don't plan on having anyone new over till at least January.
****
Not one comment on the blog came through to my inbox this week, either.  And then I also had trouble leaving comments on other people's blogs this week for the first time.  Not that I tried all that many because I wasn't feeling well, but I read them all.  Just one of those weeks, I guess.
****
But we did finish the Christmas cards, anyways.  So, now I need to work up to addressing envelopes.  ;)
****
I chatted with my mom and she's doing okay.  So far so good.
****
Actually sunny today.
I hope it is a good week.  :)
Till next time.
****
"We become what we think about."
Earl Nightingale
Posted by Rita at 12:16 PM