Good afternoon!
Was another busy week.  Spent Tuesday doing paperwork, bills, and the rest of the laundry.  Wednesday Leah was bringing over her and Dagan's key fobs because the office needed to reprogram everybody's fobs "for security reasons".  I needed to make a trip to the dumpster and garage so I met her out there.  Surprise!  She had the boys with her!  So I got a quick (cold) chat with them in their car seats with their masks on.  Leah also brought me some homemade beef broth for my soups.  It was only about 20 degrees--cold enough to make the visit pretty short.  Knew it was supposed to get colder so I brought in some bird seed while I was out there, too.  Got to keep the Critter Cafe going.  ;)
****
The arctic cold front came in by Thursday.  We won't be above zero day or night till maybe Sunday.  Was a good day to start stamping card fronts. 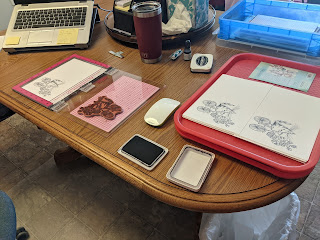 We do LOVE our Misti!  Can mass produce so much easier. 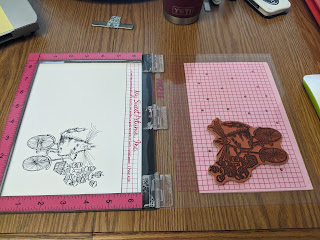 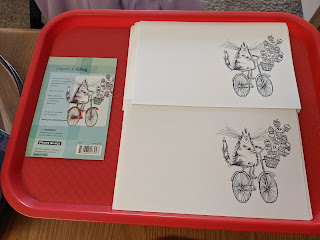 Then I started on the balloon ones. 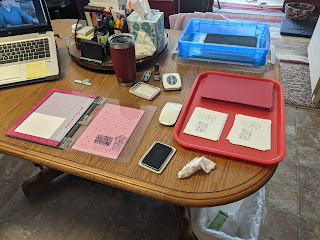 Finished 50 of each of those this week. 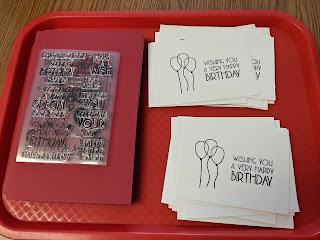 Both will also need some coloring.  Definitely keep me out of trouble, eh?  LOL!
****
I worked off and on most of the week on the Wanderlust #2 class.  My Blick craft paints were pretty thick after all these years... 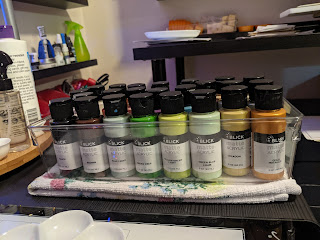 ...so I spent one afternoon adding distilled water and shaking the heck out of them. 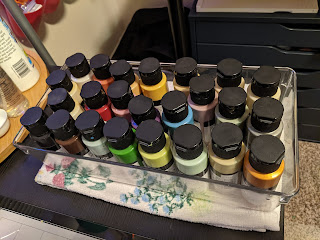 They are all set to go now.
****
One of the class steps was using high flow acrylics. 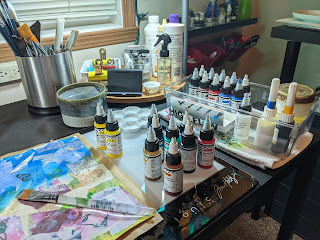 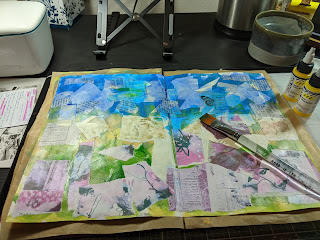 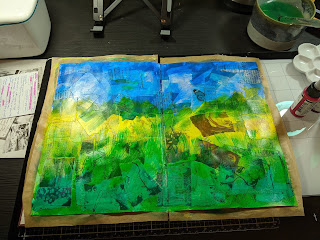 Then--too many dots of color for the bushes. 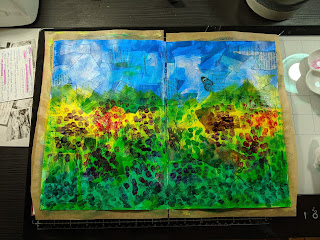 I do tend to get carried away--LOL!
****
Meanwhile...the domino effect has begun!  Started going through bookcases in the living room... 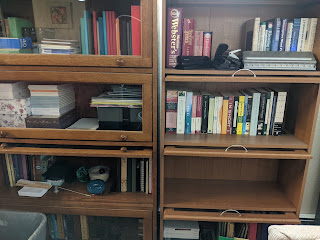 ...and the hallway bookcases. 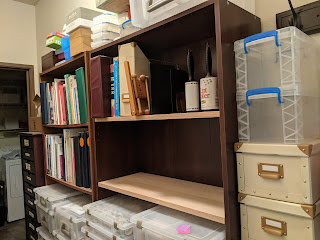 Have quite a lot of books to donate so far. 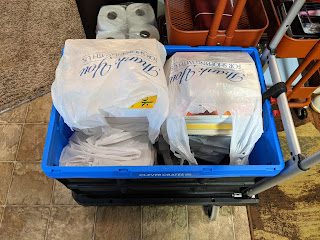 These stacks I drug out, though, are all literary journals from back when I was an English Writing major in college 1999-2004. 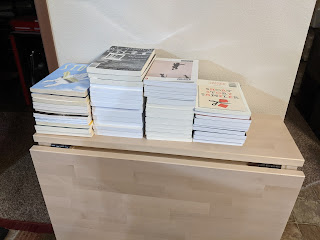 I had subscriptions to several literary magazines as a couple of my English writing professors suggested...but never had time to read them--LOL!  Haven't read any of them since...just carried them from apartment to apartment.  And now these days I am not reading so much anymore with my wonky eye.  Okay--it is easier to read an actual book than the computer screen...unless I can enlarge the print.  But will I actually ever read these?
****
Well, I am going to thumb through them...maybe keep some to read...I don't know.  Any creative nonfiction I will probably hang on to till I read those because that's my genre.  Regardless, I got a good start on the purging this week, anyways.
****
Stockpile!
Scrappy tape was on sale! 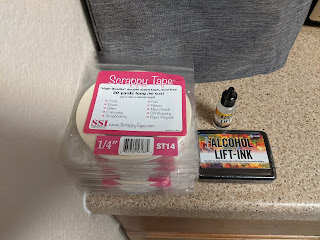 We use it for taping cards together so now we have enough for many sets of Christmas and birthday cards--whoohoo!
****
I struggled with the WL#2 for days.  Finally just said that's enough--done.  Looks like it's made of chalk...or inside a cloud--LOL! 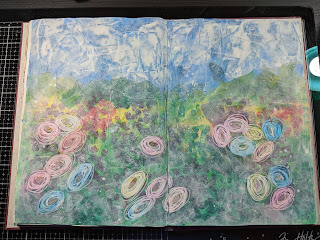 Not a fan of the abstract round flowers.
Putting white acrylic paint all over the sky and scraping some of it off...well, this watercolor paper I used to make these journals is so warpy and bumpy that I couldn't scrap decently with all the hills and valleys.  Don't care for this spread at all.  BUT I did get to use some new supplies and try some new techniques so that was fun.  Process not results...I keep telling myself--LOL!
****
I had to chuckle when I got comments on how organized I am--when it had worried me that I had forgotten to apologize with how messy my studio was/is.  It's messy to me, anyways.  But then I know that things are just shoved willy-nilly into the bookcases...and things are not labeled...well, you get the picture.  Is it any wonder I need these mixed media classes to help me loosen up?!  ROFL!
****
Oh, and when I asked Leah about my patio lights...they're solar!  They had all "burned out" because that is how little sun we had for so many days.  Still makes me chuckle.
****
Today they will get some light.  We've had some sun now that we're in the deep freeze.  When it warms up I am going to wash off the tops of the patio lights to see if that helps, too.  They were still pretty dim last I looked at night.
****
Okay...I haven't wanted to say...don't want to jinx myself (knock on wood!)...but I seem to have more spoons quite often lately.  The last few months...it comes and goes.  Been a long gradual shift.  It hit me one day that I never ever would have signed up for weekly art classes before this past fall because the very thought would have been totally exhausting and overwhelming to me.  I had a hard enough time just doing laundry and cooking for myself.  Sometimes took days to work up to those tasks I HAD to do, you know...for survival.
****
I believe it is the low carb diet.  Keto but also avoiding foods with oxalates.  All the oxalate dumping I have been and will be dealing with for some time...might have finally and gradually reached the positive turn around?  I think of what I was dealing with and how I felt a year and a half ago--swollen leg, painful swollen joint in toe made me limp, barely able to stand or walk, zero energy, falling asleep all the time...could barely even nuke food to feed myself...or work up to a shower.  What would I have done without Dagan and Leah?!
****
For years--before the leg swelling up--I had 1-3 days a week where I had the energy to do things...like laundry or making soup.  It took me days to recover from visiting or visits...even Leah coming for Craft Nites when she did most of the actual work.  Lately it is more like 1-3 days a week that I can't do anything...and more like a day or two to recover from visits.  Makes (formerly?) mostly-zombie-woman-me nervous to even say that out loud here.  I've just been starting to talk about it this past week...and nothing bad has happened so far--LOL!  I don't want my energy sky to fall.  It's not very high in the first place--LOL!
****
Anyways, that's why I am so delighted that I am able to work on cards and art every week.  I could care less if I am behind in Wanderlust.  I am not on social media with the rest of the people in the group, anyways.  Besides, you know how I love variety!  Obviously, I have card making to do...and I want to do another of my calligraphy classes...and will likely throw in other creative projects when the mood hits me.  I have missed being able to play so much!
****
Having an extra daily spoon or two for even half the week...is such a blessing.  Hard to describe after all these years...almost like going back in time.  With fibro you do have ups and downs--sometimes for longer stretches of time--that's true.  Which is why I didn't want to jump to any conclusions...and I still could be knocked back at any time.  But for now...it is a joy to be popping in and out of the studio.  (Even if I don't like what I end up making--who cares!)  To be able to go through the bookcases little by little...to work at purging and reorganizing...a joy!  (Can stand a little longer at a time--knock on wood!)  Okay--don't want to jinx myself.  I am exceedingly grateful for these past months--no matter what the future holds.
****
Until next week...may you have a week scattered with gratitude and joy!
****
"I dwell in possibility."
Emily Dickinson
Posted by Rita at 3:18 PM

I might have one of those people who commented on how organized you are. I don't remember from one week to the next. But I sure am glad to hear you are beginning to feel better all the time. That is the best news! You seem lighter in your writing, too. :-)

I like my Misti too! Couldn't do cards without it! So happy to hear you have more spoons than before! Take Care and stay warm! :)

Some progress then. Good for you. I think you accomplish a lot. More than I do, for sure.

So happy to hear you are doing better! A little at a time gets you there! I love the cat on the bicycle card! How fun! I bet you will enjoy coloring all the cards in also. Take care and stay warm!

I know what you mean about not wanting to jinx yourself. I wouldn't tell anyone that I was sure Biden would be elected. The round flowers are a bit odd, but the colors are beautiful. So nice you got to chat with the boys, even if it didn't last long. The birds say, Yay! We love The Critter Cafe!!

Every time I think it's cold here I see your weather lol Congrats on having more energy. Changes in diet are so rewarding when you see positive change from it. Enjoy your critter cafe!

I do like your weekly posts, although reaing it often leaves me feeling messy, and out off sorts. However, I also feel happy

Sounds like you are doing really well! It's amazing how food can affect one's body in such significant ways. That's good that you are going at your pace with Wanderlust. I would think that it would be more enjoyable doing at your own pace rather than rushing through the creative process.

Hi Rita! Long time no talk. I am glad to see you are doing well. I moved and misplaced your address. Would you be kind enough to send it to me again at ashley.r.shell@gmail.com . I would love to get back in touch my friend! A lot has happened since we last spoke

So very happy for you that you had a better week Rita - you write so 'happy' in this post. You completed so many of your 'want to do' projects plus you worked on art too.
Hugs.
Joy

Gosh Rita you have no idea how happy i'am for you for feeling better. You sound so upbeat and optimistic... so good to hear... I hope you knocked on some hard wood my friend when you said that so you won't get jinxed!! lol Hugs! deb

I love that you have more spoons lately. I often think that I should take a food sensitivity test so I will know what I should be avoiding.

Lots of good positives in this post, Rita, starting with seeing Liam and Ian and Leah and ending with feeling more energetic. Kudos to you on going through your bookshelves to reduce and compile giveaways. I am doing the same, but with photos by sorting through albums and removing duplicates or redundancies. All the collected photos will be sent to other family members in time. Your weather is a bit like ours in recent days and we are expecting snow Monday into Tuesday but thankfully no place to go.

It's lovely to read such news! I'm sure you won't have jinxed yourself! I eat less carbs now and feel so much better for losing weight! I've been having a bit of a craft room?book purge lately too! Your Wanderlust page looks great - sorry to see that you aren't so keen! Hugs, Chrisx