Good Morning.
Was another week that seemed like two...but I am here (bagless!) and on total R&R this week.  Endless sticky days in the 90s...but we finally got a really good steady rain with some thunder on Friday.  Still quite humid but the temps dropped down into the 70s so I've had the place opened up--so nice! 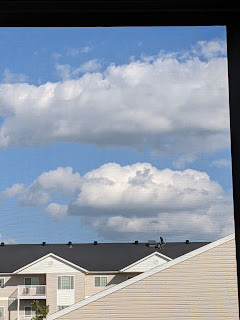 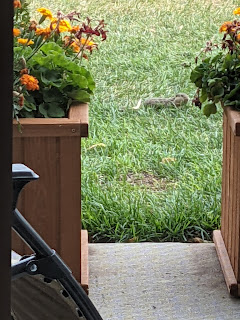 We've been able to have the place opened up since the thunderstorms and steady rain so Annie is content to observe by the screen door. 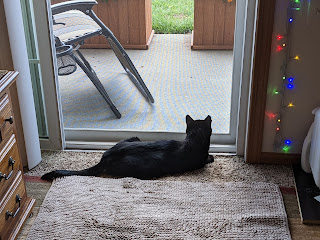 And this weekend I got quite a surprise from Deb Jones! 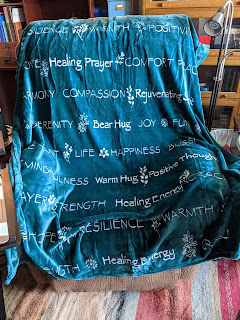 I know it looks blue in the photo but it is a beautiful teal color (a favorite color of mine).  Filled with wonderful, healing, comforting, encouraging words to wrap myself up in.  Thanks so much, Deb.  What a perfect gift!
Leah has these rotating photos of hers and mine on my smart TV.  She got some older pics from her aunt, I think, and those have been added into the rotation.  Every time I see pics of Leah when she was little (with her sister, Michal, in many of them) it just melts my heart. 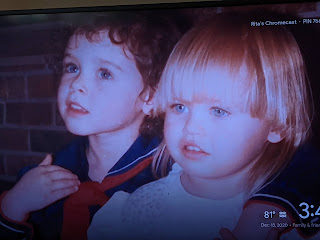 Leah's the dark-haired angel on the left.  (Yes, her hair is naturally curly but she straightens it.)  Funny--seeing pics of her when she was little does the same thing to my heart as seeing my Dagan when he was just a tiny guy.  Love them both so much.
So, another eventful week.  This coming week will be quiet and calm.  May or may not get my sauna next weekend, but other than that--R&R time baby!  I didn't realize how exhausted I was.  I fell asleep 9pm till midnight last night and was right back to sleep at 12:30am till 9:30am!!  Oh, I needed that.  Was wonderful.
Anyways, that's it for last week.  I plan to fast a couple of days this week...liquid fast..and delight in the "normal" days.  :)  Till next week...
****
"Love and hope are infinitely more powerful than hate and fury."
Heda Margolius Kovaly
Posted by Rita at 1:08 PM