Good afternoon.
I think my plants will survive.  The two philodendrons (actually pothos I discovered many years ago but since I had always known them as philodendrons this old brain has trouble renaming them) are looking good. 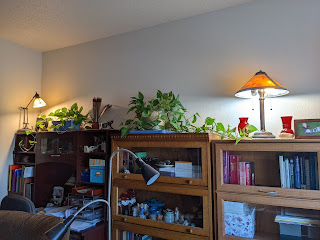 The spider plant isn't looking as good.  The mother plant lost a ton of fronds/leaves but it will survive, I think. 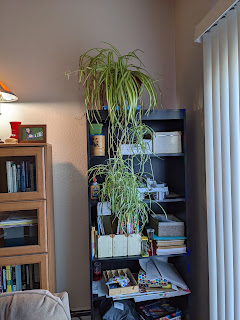 I still may have no spoons, but what a great week!  First of all I decided that I want another oncologist.  When Leah and I went on Friday we planned to ask for any other doctor who could see us on Friday afternoons.  Leah reminded me that I don't have to put up with Kobrossy.  True.  So true.  Even if I had to get a part-time one.
Back when we had Dr. Katkov for Dagan there were no other cardiologists at Children's in Minneapolis...and he was our only choice for something like the first 8-10 years of Dagan's life.  As soon as Katkov hired a partner we asked for him instead.
When I was diagnosed with cancer there was only Dr. Kobrossy, another lady oncologist who was only there very part-time and worked at three hospitals, and that was it.  Well, now there was Dr. McCune because they set me up with him for the hospital follow-up...and I found another male oncologist on their website now.  So I planned to ask to switch the doctor and time for my next appointment on the 17th if that was possible.  Fingers crossed!
We went in, got blood drawn for labs, and went to an infusion cubicle.  Did not expect to see Dr. Kobrossy--remember I opted not to see him.  Well, he popped in to haunt me--twice!  Leah said she could see the disgusted look on my face when I laid eyes on him...even with a mask on--LOL!--so I'm sure he could, too.  (People have always told me everything shows on my face--even when I don't think it does--LOL!)  I avoided talking to him or looking at him.  Just seeing him--well, really convinced me I need another oncologist.  Even though he was trying to be so nice, of course.  Anyways, my bloodwork was finally better.  (As I figured it would be once I was finally on the upswing and therefore planned to refuse any other exploratory camera work.)  That was great news as then there was nothing that Kobrossy was following up on with me anymore, either.
Instead of being there for 5-6 hours it was 2 hours!  Nice.  I got my first immunotherapy infusion and on the way out we talked to one of the ladies at the desk.  They knew that Friday afternoons were much easier for us so they didn't think anything of me asking for another doctor.  Turns out Dr. McCune is part time and there's another Dr. Bianca Ferrari who's part time, too--and they usually trade off being there.  Fantastic.  I have Bianca on the 17th.  I would gladly trade off between them and see two oncologists instead of Kobrossy.  :)
Kobrossy will find out when he sees his appointment has been cancelled.
Leah came over afterwards to help with some things, as usual lately.  She vacuumed, cleaned some Annie barf spots with the spot cleaner machine, baked some fish for me, and got the dishwasher going.  Now that I am so slowly on the mend and have three weeks off...Leah will start coming over on Thursday nights again for Craft Nites.  And I really want to do some crafts--something creative.  I have missed that so much.
I ordered a couple of Valentine's Day card supplies for the boys.  On the left is a stamp that we would emboss in black and they could color the hearts any way they want to.  On the right is a die set--oops!  Can't even see the pieces. 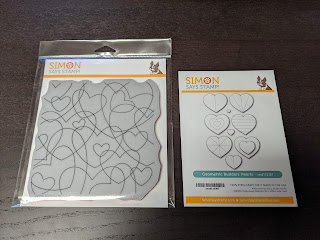 You can cut out many different colors and then piece them together.  Pinks and reds or rainbow colors or even printed paper pieces.  Will be like them putting together a small puzzle with a glue stick. 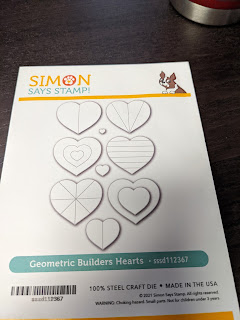 And how far have I gotten with Christmas cards?  Not far--LOL! 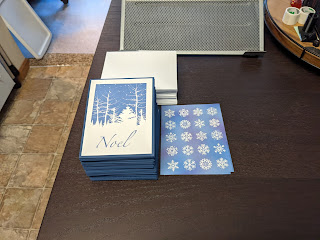 But that is what I plan to get going on this week.
And how has the immunotherapy gone so far?  I've been running a low temp off and on and have a bad headache, but that's been it so far.  By comparison--that's nothing!!  :) :)  Otherwise, I'm feeling about the same.  Spoonless, but on the mend.  And it is soooo great to know that I don't have to go back for an infusion until the 17th AND don't have to see Kobrossy.  I do have a hospital follow-up appointment with the GI lady on the 7th (unnecessary in my opinion).  Oh, and my legs have better days (or parts of days) here and there, so hopefully that will mend itself, also.  Didn't use a wheelchair last Friday--but still had Leah pick me up at the door.  That's progress.  I just need time to heal.  Going the right direction--no matter how slowly.  Life is good.  :)
I'm actually up at the kitchen table typing and not typing from my chair.  Got the table mostly cleared off for the first time in months.  Annie wanted her chair next to me right away. 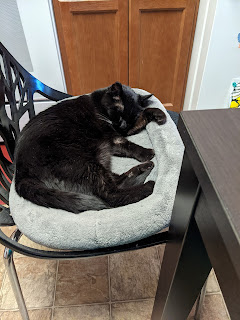 I have a long to-do list for when I feel better...but this week I will be happy if I can get started on Christmas cards...and, hopefully, the laundry.  (No--I never got the clothes put away from last time a couple weeks ago--just been grabbing them off of piles and hangers hooked on dresser pulls and door knobs--LOL!)  That would be amazing if I got the laundry done--even if I don't get anything put away again--who cares!
I haven't been up to watching anything I have to pay close attention to so I re-watched Vera and am now re-watching Shetland and eventually will finish Monk.  Still have a harder time focusing...but pretty soon maybe I can tackle a brand new show.
This will be so nice--for all of us.  Once every three weeks feels like a vacation!  I have disrupted Dagan and Leah's lives so much these past few months...and mine ground quickly to a complete halt.  Such peace to just be left alone to rest and heal.  Ahhhh!  And as soon as I am feeling up to it (and have quarantined) I can have McFamily over for a visit or even go over there for a visit.  Been such a long time.  I'm not up to a Gramma Day for a while, but now it is something I can imagine in the future again.  :)  Life is good.
Well, that's it from here for this week.  Thanks for all your prayers and well wishes.  I can always feel that positive energy from you all.
Happy thoughts!!  :) :)
Posted by Rita at 4:51 PM