Really, really hard for me to believe it is Monday as I lost most of this past week.  I'm considerably more human again today--so here we go.  Not that much to tell.

I was worried about Allie the beginning of the week for a few days as she had diarrhea for no apparent reason.  But she has been better the rest of the week.  (Although worried about me because I have been sleeping so much--lol!)

I did manage to get the 20+ year old velcro rollers out and set my hair--and it made me laugh and laugh!  It was like going back in time--LOL! 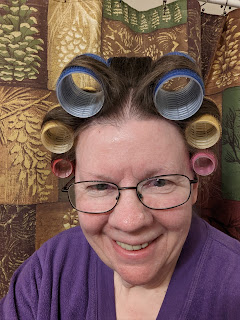 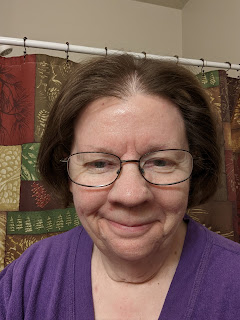 Didn't even look like me anymore with the bit of poof.  And with my straight fine hair, about two hours later it was all flat and straightened out again because I didn't put anything in my hair to help it keep a curl.  (I hated that gel that made my hair stiff and crusty.)  I might try again with all smaller rollers for the heck of it.  Gives me a good chuckle, anyways.  Thought it might for you, too.
Keanna came to clean on Tuesday.
Had insomnia until I finally crashed for 10 hours all day Wednesday.
Been awfully cold.  Highs in the 20s.  The Critter Cafe has been busy all day long--with seed put out a couple times a day. 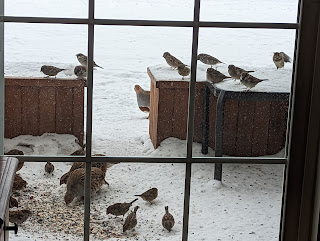 Covey of nine comes by a few times a day... 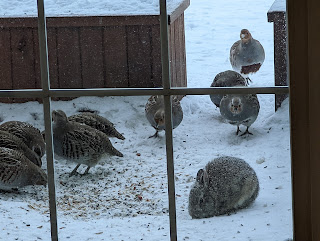 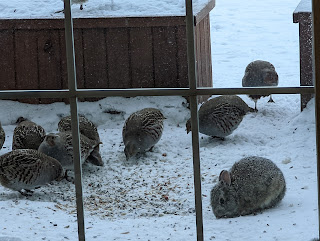 When it was super cold and windy sometimes the covey of partridges would go park themselves under that tree by the garages in-between meals.  Maybe so they can see when I toss out seed the next time? 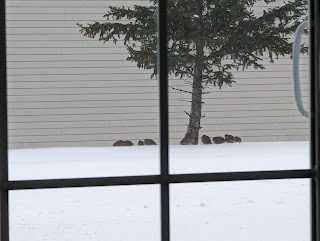 Well, the inside plants did not fare well after the transplant. 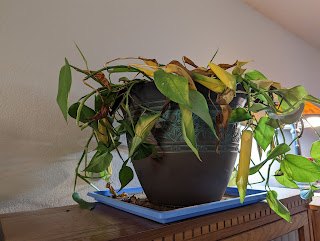 May have been too cold for them that night after all? 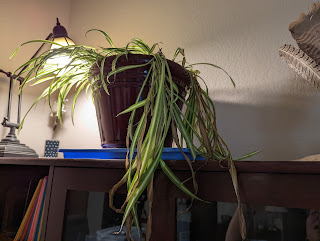 I did finally manage to get up there on a stool and pluck or cut away all the dead leaves and fronds. 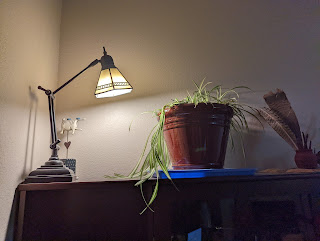 The spider above seems to have done better than the philodendron.  Hope it comes back. 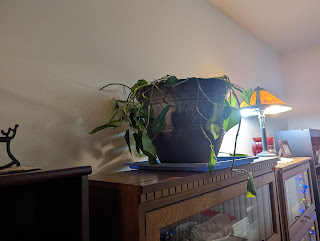 Thursday.
Infusion day.
If you remember Leah and the boys had a dentist appointment so she planned to drop me off and pick me up later.  Turned out Dagan decided to take the day off and come with me!  That was a nice surprise.  I don't get to spend enough time with my Dagan.  :)
Brittani was friendlier and more talkative than she has ever been.  (Dagan thought she was a bit cool--I told him he should see her normally!)  But she didn't bother to warn me of a change of plans for scheduling--once again.   So in that respect--she was no more forthcoming than usual--LOL!  The every other time of seeing her is altered again because she won't be there in six weeks.  So next time I do the whole 3-appointment visit (lab, Brittani, and infusion)--which means early morning again.  (Mornings are the worst time of day for me--I wish she'd warn me, at least--oh well.)
Then I went up to get my Pfizer Covid booster...the new one.  Leah and the boys were already waiting in the car for just a little while.  Almost perfect timing.  I wasn't feeling that well (not the shot--was my Keytruda/IBS stuff) so I had them drop me off at home.  They went off and came back in a short while with a late lunch for all of us!  So we all got to eat together on my "almost rainbow plates", as Ian proclaimed them.  Afterwards Dagan brought in more bird seed (he dumped in the bin) and the AC cover (Leah put on).  We had a really nice short visit!
I really thought I was maybe going to avoid all the badness of the Covid shot...because it didn't hit me until 10pm...8 hours later.  But hit it did!  Chills, shaking, all over body pain, headache.  I think I was still shivering with extra layers of clothes and extra blankets piled on when I fell asleep about 11pm.  Up and down to the bathroom, but didn't wake up fully until 2pm on Friday.
But I wasn't awake for long.
Slept from: 3-6pm, 7-10:45pm, 11:30pm till 4am,  6:30-9:30am Saturday.
By 4am I was only up longer due to diarrhea.  9:30am on Saturday it was so bad we're talking shower and changing clothes.
I was up all day Saturday.  Diarrhea.  Miserable.  Not functional.  Just watching YT videos mostly, half dozing, catching up online but barely up to typing anything...could hardly move for the flu-like symptoms.
Meanwhile...on Friday Leah had made a trip down to Minneapolis to load up her car with as many of the IKEA boxes at her sister's as she could fit in there!  (Said she got about half of them.)  She got to visit with her sister and her family and also her uncle and his family and had a nice time. 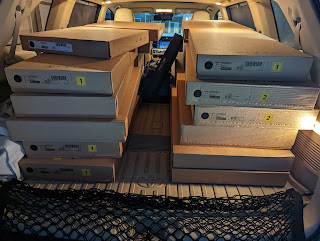 BUT--the last 2/3 of the trip home was a nightmare!!!  Was snowing and blowing so she couldn't see.  Part of that time she and two semis were driving with their flashers on so they could all see each other in the dark!!  Good Lord!!  She literally risked her life to bring those IKEA boxes up here!  You never know what you might be dealing with in the winter up here.  Whew!!  I'm so grateful she was okay!!
Leah collapsed and took it easy on Saturday.  Well deserved!
Sunday I slept over 11 hours (4:45am till 3:30pm).  A couple of hours later Leah had been over to unload the boxes into my garage. 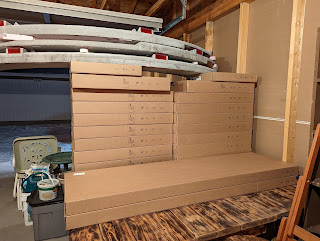 The weird curved pieces on top of the tall stack are sections of a foam Stargate that Dagan and Leah used to use when they went to ValleyCon here every year and had a Stargate room at the convention center.  This surrounded the door to the room and had dangling shimmery strips of something or other so that people had to pass through this cool fake Stargate to enter the room. 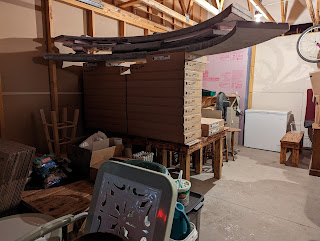 All the speckly wood furniture was for the Stargate room also. 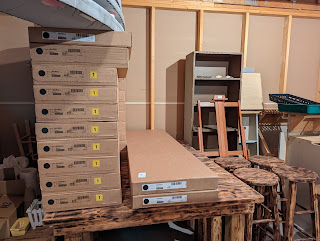 Now they hold up my furniture boxes and bags of birdseed--LOL!
Anyways, Leah stopped in briefly to drop off some food, too.  I was still barely human and non-functional.  I am finally moving about a little today.
I honestly don't know if the Pfizer booster was actually better or worse than Moderna, to be perfectly honest.  I have been having worse and worse reactions to the shots over time...and--let's face it--I'm on Keytruda.  Many things have gotten worse over this last year that I've been on Keytruda.  I'm having worse reactions to boosters which are half doses than I did to the original full doses!  Every single shot has been worse than the last.  I am inclined to believe this is just another form of the Keytruda working overtime and causing reactions.  Nothing else makes much sense.
So--I didn't get much done this past week.  But I survived another booster shot!  Hurray!!  I'm still weak and tired with no appetite...but I am definitely on the mend.  My huge project for the day--wash two load of clothes.  I doubt they will all get put way--ROFL!  ;)  And I don't care.  They'll be clean.  I will get back in gear when these old gears are working again.  :)
Till next time, my friends!  Take 'er easy!!  Happy Thanksgiving to those in the US.  Stay safe!!  :)
Posted by Rita at 4:39 PM

Aww, tough week. I hope that you have a good TG. I am opposite to you in that only the most recent one was Moderna. Sorry to say for your sake, but none of them affected me.

Wow, you had an eventful few days and sad to hear your difficult reaction to the booster, complicated by the other medication you take. I like your Critter Cafe, I just ordered a replacement bird feeder, to replace a feeder that fell and got bent. How cute you have a bunny visiting your cafe too.

Hi Rita. I am glad you survived the Covid booster and infusion and got through the week. Also so glad that Leah finally got home safely in that terrible snow storm. Winter has set in early this year it seems. I have a card going out in the mail to you today. Have a good one. See you soon.

What a nightmare is right! I am glad you are on the mend, and I do hope you realize that sometimes sleep is the only way to recover from physical and/or mental shocks. You never stopped caring for the critters, however sick you felt! Good for you, dear friend.

I know the COVID shots have been horrible for you. At least you haven't gotten the virus on top of everything else. I'm glad Leah made it home safely. You all had a pleasant day together when Dagan went with you for the infusion. Your hair looks nice with a bit of poof. If you used smaller rollers, do you think the poof would last longer? My hair is horribly fine and straight, too. I also don't like to put a lot of "product" in it because of that stiff, crusty feeling. A couple of weeks ago I went to someone new to have my hair done. I'm very happy with it. I got a perm and a color rinse and a cut. It's very curly now and has lots of poof, which makes me happy. The color is a dark reddish. If all my hair turned gray, I would be fine with that, but I don't like having bits of gray here and there. I mailed a letter to you yesterday, so maybe it will arrive on Friday or Saturday.

My goodness Rita! I'm so sorry you took the Booster so hard.. I don't know if hubs and i are getting the Booster.. Neither of us seems inclined to get it.. We've taken all the others.. with little to no reaction.. thank goodness.. Thinking of you dear Rita... I'm working on a snail mail to you!! Hugs! deb

So sorry the booster shot affected you so badly. At least you were able to sleep. I hope everyday is a bit better. Happy Thanksgiving!

I hope the benefits of the booster outwieigh the illeffects of having th shot. The wildlife that visits your backyard is simply amazing. If I lived close by I'd ask for permission to visit!

That was certainly another rough week, Rita, and a cold one as well. Glad that Leah was OK and made it home safely after getting caught in the snow with those semis. Now comes the eventual fun of assembling the furniture. We remember those days well as our VA bedroom and some pieces in other rooms were all Ikea -- it was one of our favorite places.

Happy Thanksgiving wishes sent to you and Allie from Grenville and myself here in NH. We hope you are able to spend the day with McFamily.

How exciting that your furniture -- or a lot of it -- or whatever is in those boxes is here! Sorry about the side effects of the shot but if it does the trick it's worth it. And those rollers are a real blast from the past! Made me smile big (and it looked cute when you were done, too!)

Every time you get a Covid booster, you get sick. I hope this is the last booster for awhile. Sounds like it was a roough week for you and a rough day for Leah. Let's hope for a far better week ahead (for both of us). Happy Thanksgiving, dear.