Hard to capture a sunrise lately on these dark days. 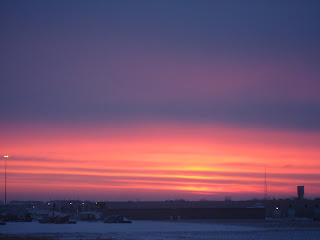 There has to be a break in the cloud cover right along the horizon. 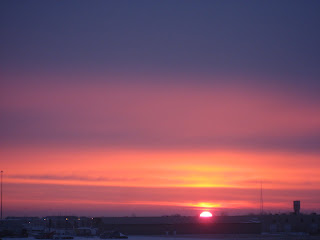 There are only a precious few minutes before the sun, in all its orange and gold glory, inches up over the horizon... 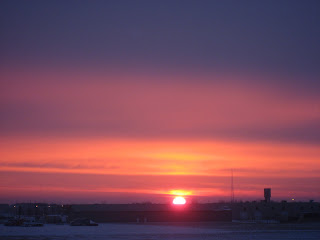 ...into the cloud blanket...and the dark, slate grey day begins. 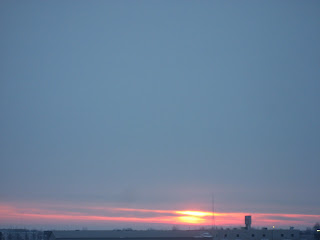 Well, I had quite the day today. Three people let me know that I had a huge warning on my blog as of some time Thursday night telling people to enter my blog at their own risk because they might get malware because of an Australian website connected to my blog--something to that effect.
****
Now, I have to say that I know this lady would never knowingly spread malware. It's a personal website of a lovely woman named Cindy who's an artist and teacher. It took about four hours with a Blogger help tech guy--waiting for responses and then trying to figure out what he was telling me (not much detail for the computer semi-literate, I tell you), but we finally cleared my blog of the huge warning sign. Sadly, the only way I could do that was to delete Cindy as a follower--which I didn't want to do. I believe the malware was on a her old website (where the last message was the address of her new site) but Blogger would not free me of the warning sign until I had deleted them both. :(
****
I'm sorry, Cindy! I didn't realize I was still even following your old website and apparently Blogger thinks your new website isn't safe, either. ?? I hope you can get the problem fixed and we can hook up again later. I tried to email you, but haven't heard back yet. I'm not even sure if you can or should email or not until the problem is fixed because I don't know how these things work. I would miss you and seeing what your talented students produce, too. I don't mean to be rude, but please don't comment yet on my blog until you're in the clear because I might get the warning again. Email me if you can, okay?
****
Karma snoozed through my long dilemma--LOL! 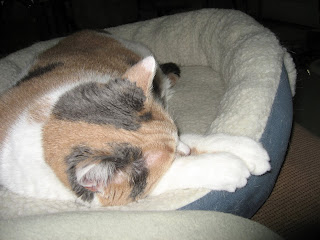 The only extra thing I did since I last wrote was play around in the pantry. I say "play" because this is probably not what will actually be in those many baskets (except for the cat food cans. I know I want those in there). I just started testing to see what would fit and what wouldn't (they are not very deep) and the next thing I knew I had filled them up. Decided to leave them like this for a while to see if they will sag at all with the heavier goods and because I have to feel up to completely emptying the pantry. I want a total cleaning and reorganizing...been years since I've done a complete overhaul...and I'm not up to that right now. 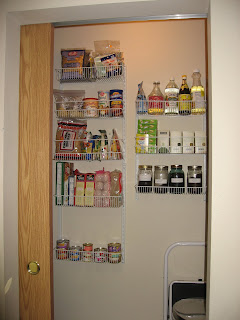 Anyways, yes! Caroline did a double take and scooted over to look. She thought the basket shelves were pretty cool. And, yes--I was in my robe with slitted eyes. Caroline even went down and collected my mail for me. I've still been sleeping evenings and not usually sleeping very long. I had one night I slept eight hours since this started. Usually 4-5 hours, which is nowhere near enough since I got fibro and can't just push through like I used to do all the time. So, playing in the pantry is about it. The only thing I have accomplished beyond the daily normal have-to-do stuff. ;)
****
Let's see...oh, the sewing machine! The guy called and told me it was a bad needle. Huh? Say what? He told me the needle was bent and I could pick up the machine any time and it was only $1.07 for the new needle. I was speechless...and suspicious...but, being the typical Midwesterner, just said in a halting voice..."Okay, I'll let my DIL know". But geez!??
****
You may remember I told you how the stitch sample was in cream colored thread and there was black thread on the machine when I got it back. So. Does this mean that after he was done testing my machine he switched from cream thread to the black thread and actually bent the needle in the process? None of this makes logical sense. Why wouldn't you just have used the black thread that was on the machine in the first place? And how rough could this guy be to, while re-threading with the black, bend a needle that had seconds ago performed just fine according to the cream stitching sample? The needle could not have bent itself while sitting inside of the case after it left his shop. I didn't bend it. Hummm...I am skeptical. I don't mean to cast aspersions, but it appears to me the man might well have been covering his behind.
****
And then--to charge me for the needle! After paying him, what was it...45 or 47 dollars to have it tuned up, cleaned, oiled, and ready to go? Nothing needed fixing, he made no repairs, and it had worked perfectly last time I used it. Well, if I ever do need repairs on my old faithful...I think I might bring it someplace else. Sad because being associated with a quilting store--they're normally the best. And he is a busy man. Hey--shudder--does that mean that maybe there's nobody else in town as good as he is? Who knows? Hopefully I won't have to worry about it and my machine will run another 37 years without a check up. (I can't believe the original belt was still good!?)
****
Okay--enough sewing machine talk. I'll find out when it gets back here again--but it had better work like a charm, right?! ;)
****
I'm going to try and remember to use this largest font so that, hopefully, on her good eye days Melynda can read my blog again. Hi, Melynda! :):)
****
I guess that's enough for today. I didn't go near blogland when all the malware stuff was going on. And then I spent way too much time at the computer so that, by the time that was all fixed, I was too sore to be on it any longer. Slept 5 hours and up the same day. No wonder I'm feeling off kilter--LOL!
****
I'll gradually catch up with you all! The very thought that I could have lost my blog...well, it shook me. Startled me as to how bereft I felt at the thought of losing all of you!! I was confident that this would be fixed somehow, but in that moment...
****
I want to thank each and every one of you...the ones who comment faithfully...and the ones who are occasional commenters...and the ones who read and never comment. You all brighten my days. Your kindness and generosity and empathy...that you share some of your time with me...I am honored. You make me smile just to think of you. I hope we stay connected. I know I would have been okay, of course, after I got over the shock...but I would have missed you...a lot!!
****
I thank the terse Blogger tech, too. ;)
****
Talk again soon!! :):):)
****
"A single rose can be my garden...a single friend, my world."
Leo Buscaglia
Posted by Rita at 11:14 PM