The last two days (or evenings, I should say) I have only gotten a restless 6 and 4 hours of sleep. I already emailed Dagan ad Leah to tell them that, unless they hear otherwise, I have to cancel Wednesday night. I am not sure how I'm going to stay awake while Caroline is here. Probably be one of the rare days I'll be greeting her tonight (...tomorrow?...what day is it?) at the door in my robe. ;) Such is life. My life, anyways--LOL!
****
Karma takes it all with a grain of salt. As long as I am functional enough to feed her, talk to her, and give her some lovin'...all's right with her world. ;) 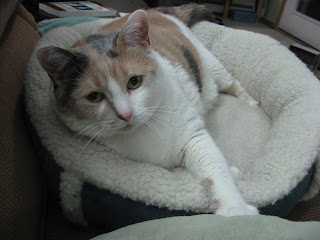 A couple days ago I tried filling a converter with some of this Parker turquoise ink that was Leah's mother's. It's the very bottom dredges, as you can see. I discovered it has become so thick and grainy that it doesn't even flow well in a fountain pen anymore at all--keeps plugging and skipping--so I decided to drip some on a damp page spread in my little art journal. 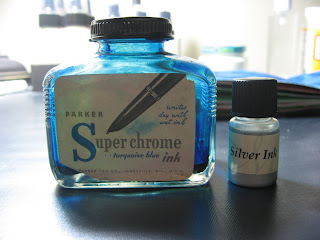 I also dripped some of the silver ink I got from Tori, too. As you can see, that didn't spread much at all. I had to tip the journal around to move the silver, but it is shimmery. Reminds me of pictures taken from high above the earth for some reason. Anyways, felt good to play with another background spread. :) 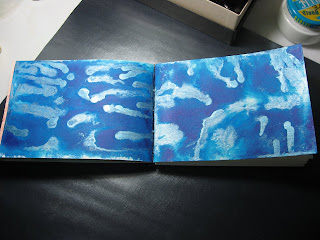 We did finally get a little snow!
Here's a before picture where it was almost melted away... 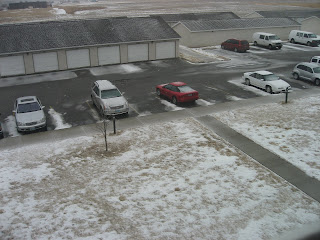 ...before I went to bed in the afternoon while it was snowing... 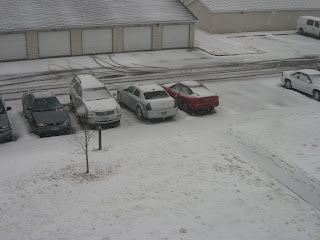 ...and after it was done. Doesn't look like too much. The mail lady told me she heard 3.5 inches but we both agreed it didn't look like that much at all. Probably because it is still bouncing in and out of melting weather out there. 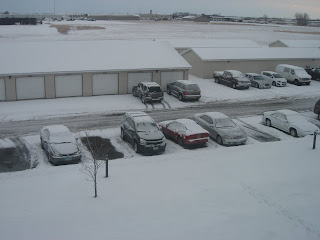 Why did I see the mail lady? :) My Amazon order arrived this afternoon. I'd been trying to sleep for half an hour--to no avail--so I didn't mind getting up and getting dressed to go down and get the package. Especially because I knew the melatonin was in that little box... 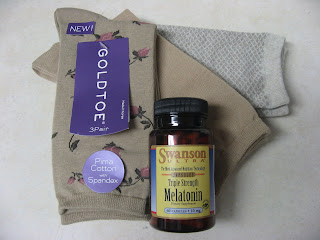 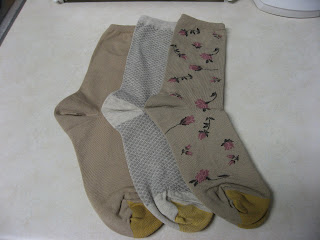 Well, I took one of the triple strength melatonin capsules. And slept four hours. Woke up with the same headache I've had for two days. :( Better luck next time, eh? I'll keep trying it when I am not sleeping well, like now. Can't hurt...I don't think.
****
The cat grass planter is jungle length now. Karma is so happy. I am happy that she can't pull out as much of the grass, too. Normally it lasts for a few weeks and then gradually dies off. Not sure if it is supposed to or I just give it too much water or not enough. I've tried trimming it and leaving it be. I suppose since it is actually barley & oat seeds and the like that it just isn't meant to flourish in a little pot? 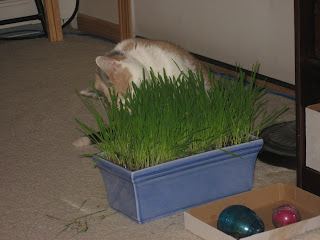 It's worth the trouble to watch Karma contentedly graze--LOL! I've had cats who weren't interested at all in the cat grass. I suppose it's kind of like catnip where some cats love it and some could care less. Karma is so-so with the catnip...but the cat grass...she loves it and keeps going back off and on...day and night. Of course that could be because she knows it only lasts for just so long. That makes it a really special treat. ;)
****
Well, I am still having strange things happen with google & blogger. I didn't change any settings at all and yet suddenly several days ago I started getting double emails for every comment. One is the black and white normal font and the duplicate is in a purple font. ??? I don't think it is doing anything else strange, but who knows? Has anyone else had this happen?
****
I had a Russian (?) man sign up as a follower at the same time this started happening. He had no blog of his own and there was nothing written in English about him and he has never commented, so I found it suspicious. Also, at that same time, I started getting emails about anonymous blog comments (obvious spam) which never went through my approval first in blogger. They just slipped directly into my emails...and are in Russian (or whatever language it is) and are selling something. I have been catching them. Yesterday I blocked that follower and we'll see if that stops the spam attempts. I have never blocked a follower.
I felt guilty.
****
Something else I feel bad about...the new double word verification. I absolutely hate it! I have been struggling to deal with it on so many blogs I follow. I really do hate to quit commenting ...but...this new word verification is driving me crazy! With my nearsightedness and the pain I get in my back and shoulders in the first place and then having to lean way forward to try to decipher the secret code to prove I'm not a robot...and getting it wrong most of the time...and often more than once...well, I have decided to skip commenting on those blogs. And even that decision is so annoying because I don't know (or can't remember) who has it until I have already taken the time to make a comment and clicked to post it. Argg!
****
So, I feel very badly about it but I am going to make a list of who has the crazy word verification and keep it right next to my laptop. That way I can still remain a follower and read the posts...but I will know which blogs not to comment on anymore. I have never understood why some people have word verification AND comment approval in the first place, but people can do whatever they want to. I am just saying that the old word verification was annoying but it was rare for me to get it wrong so it didn't take all that much extra effort. This new anti-robot version is just too difficult for me to deal with. To the point that if blogger ever forces us all to go with the new blogger version and we can't remove the word verification I will either quit blogging altogether or have to move to someplace else like WordPress.
****
With my limited productive hours each day...knowing I already spend too much time online...after the fifth time of being rejected after having written a long comment yesterday...I actually cried. Please...please...think about removing word verification. And, if I don't comment on your blog any more because of this...don't take it personally. Please come and visit me, anyways, okay? My blog family has always been such a scattering of light throughout my days...you are all so special to me...if we are ever forced to use this ridiculous version...I would be heartsick to leave you all.
****
Okay. Enough said.
There are many, many bloggers very upset over this.
Let's hope google/blogger hears us and listens to us.
Think positive, right? :)
****
Meanwhile...4 hours of sleep...zombie-ish...obviously not up to dealing with word verification at all tonight--LOL! I think I'll watch a movie or catch up on some recorded TV shows. Karma is out like a light next to me snuggled in her cat bed. The building has gone into nighttime quiet after midnight here. I feel badly that I was washing clothes till 3am last night. I really hope I didn't interrupt anybody's sleep. I'll be extra quiet tonight. ;)
****
Have a great Wednesday!
I was just thinking how I'm so grateful to have Caroline. Can you imagine how thick the dust would be and how bad my bathroom and my floors would look? She's a blessing. And she won't even care if I greet her yawning in my robe with slitted eyes.
Life is good! :):)
****
"Hold a true friend with both hands."
Nigerian Proverb
Posted by Rita at 10:58 PM