Thought I'd give you a touch of green first--LOL! 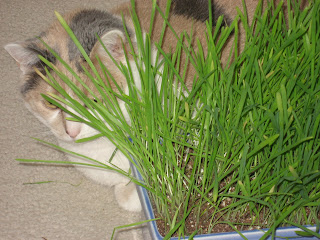 Karma peeking from behind her grass jungle. :) 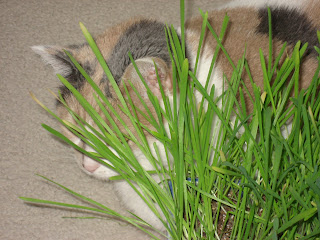 We had a blizzard hit this weekend. 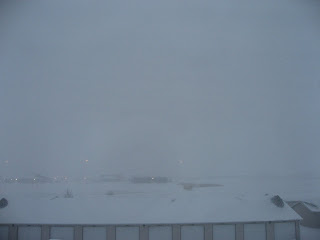 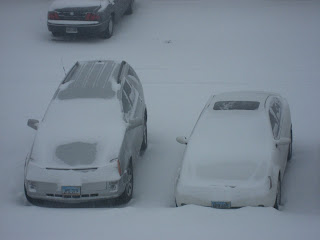 The wind was coming our direction so that the porch got some actual snow accumulation for the first time this winter. 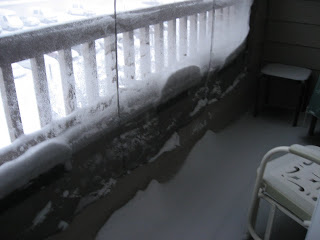 Karma was delighted! Begged to go out, of course. Here she is doing her foot shaking walk across the snow to get under the chair where it was dry... 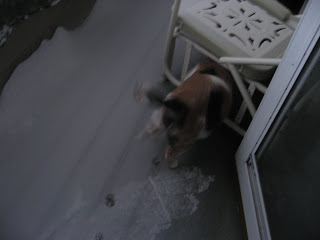 ...and she could sit in comfort and lick snow for a few minutes... 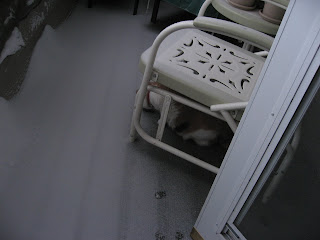 ...until the below zero windchill forced her back inside. 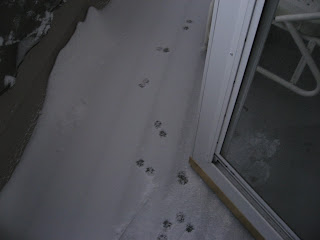 It was good "footprint" snow this time. That other "dusting" we got this winter barely stuck to her feet. This time she drug in some good sized footprints to quickly turn around and gobble up. 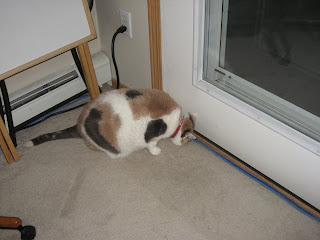 I took these pictures in the afternoon when the snow was letting up. I love when the snow drifts and hangs out over the rooftops. 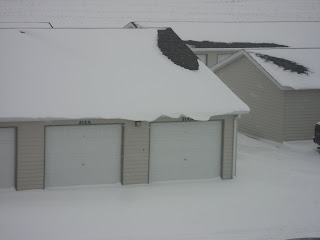 The wind was blowing like crazy so the drifting is mostly up against my building underneath me. Actually cleaned off parts of the parking lot and the vehicles--but you can see the snow hiding... 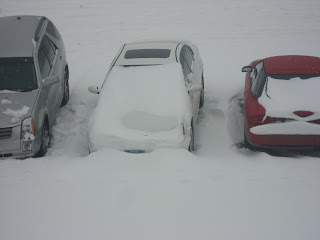 ...from the wind behind the cars--LOL! 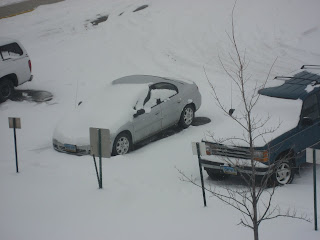 I guess the driving has been horrible. Even the Interstates were slick with ice and drifting snow and visibility is always terrible in a blizzard, of course. 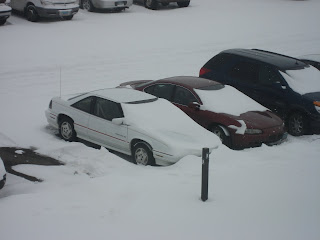 I actually put on the news this morning and there's another blizzard expected to come through Tuesday and Wednesday. I guess I'm glad that I'm not going to be the one driving on Wednesday morning to the dentist. Depending on the blizzard, I may or may not be even able to make it there at all. They're slow to plow us out here and I wouldn't want the Senior Ride van to get stuck out there. If it looks bad and hasn't been plowed yet I'd call and tell them not to try our parking lot. (We often get people stuck out there.)
Time will tell.
****
Karma has been thrilled with the snow. (Me, too!!) She'd been out five times before I went to bed yesterday afternoon as you can see by all the cat tracks on the porch--LOL! She'd make a trip out under one of the chairs, come in all cold, eat her footprints, and then snuggle up in her cat bed for a brief nap...wake...repeat. Silly, but happy, cat! 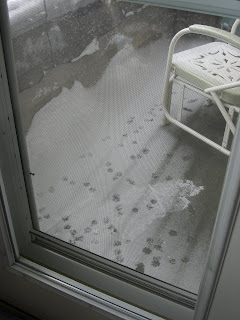 Me--I finally just collapsed. Went to sleep at 3:30pm and was up at 4am this morning! Only up five times, too! Hurray! I really, really needed sleep soooo badly! :)
****
Okay, after I last talked to you, the saga of the malware warnings continued. :( Even though the warning was gone if you used Internet Explorer or Safari--I found out it was still showing up on Chrome or Firefox. So, I was still afraid to do much of anything on my computer.
****
Even though there was no more warning on the major servers, I just didn't want to push it and take the chance of causing anybody else any computer troubles, ya know. I removed the current blog post roll on the side of my blog. Then I emailed Dagan for help--wanted to make sure I hadn't gotten something on my laptop, ya know?
****
Dagan and Leah stopped by briefly on Saturday night and Dagan started up a scan of my laptop for me. That takes a long time, but it was clean and bug free!! I also got an email from Cindy saying her blog was cleared up. Wasn't just her blog, either! Her server was attacked! And then my BFF Ruby said she wasn't getting the warning anymore (Firefox). Finally--free and clear on all fronts--TaDa!
****
But I was going on 3 hours of interrupted sleep again yesterday and was waaay too tired to even think about beginning to catch up in blogland or with my emails. I'm still tired, to be perfectly honest--LOL! But I hope to at least begin today now.
I have missed you all!
****
I hope this sleep-a-thon has gotten me around to days. It's a quieter morning up here--for today anyways. Until tomorrow afternoon they're saying. Be just enough time to clean off the roads from this blizzard before the next one arrives. It's cold--7 degrees and -17 wind chill. Roads are dangerously slick. So, anyone from up around here, drive very carefully this morning. Have a really good Monday, everybody!! :):)
****
"Umuntu ngumuntu ngabantu."
(A person is a person because of other people.)
African Proverb
Posted by Rita at 5:57 AM