Well, Saturday it got up to 71 degrees!  We had a few days in a row of gorgeous spring weather with sunny skies and 60s.  People were running around in shorts...but then they did that when we hit the 40s--LOL! 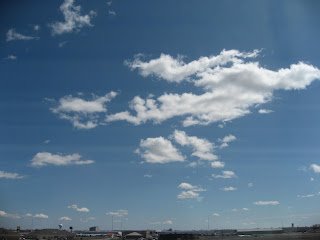 But then Wednesday morning it was in the 30s, stayed chilly all day, and right now it is 26 degrees.  Springtime in the Upper Midwest--LOL!
****
The Fargo Flood Watch--well, flooding is when the Red River gets over 18 feet, major flooding is over 30 feet, and we're at 33 feet right now.  Apparently this is around the cresting point--maybe 34 feet.  So it isn't as bad as they first predicted (which was closer to 40 feet) so that's something to be thankful for!
****
It hasn't been the most productive week for me with the leg holding me back, but I did get the little end tables wiped down on the porch and brought the chair back out there.  (Karma's now using one of the rolly chairs from the craft table instead to hold her blue bed.) 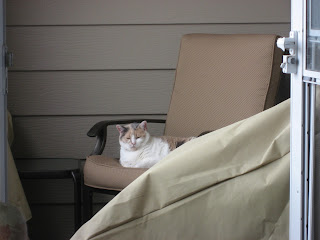 I think she was wondering if I was going to boot her out of her spot, but I was sore and restless so I let her have the chair all day. 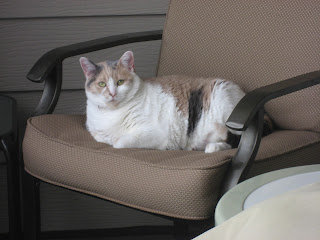 She kept thinking she saw bugs because I had killed a couple flies out there, but I didn't see any more.  Wishful, spring-fever thinking on her part.  She loves to watch bugs. 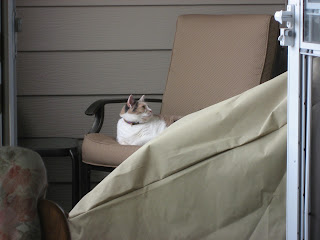 This was the snirt pile on Monday.  It was down to less than a foot yesterday, I think. 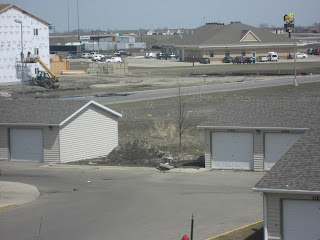 Karma was thrilled that the porch doors were propped open for several days. 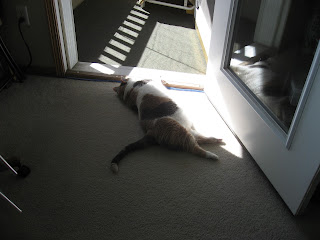 I even switched her over to her "summer" wild, colorful, lightweight collar. 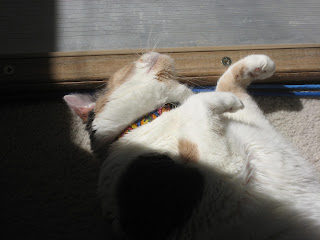 Those darn stencils were bugging me, though.  The paint was hard as a rock on there.  I was tempted to try 409 and emailed Leah about picking some up.  I was desperate.  Well, Leah--obviously better friend of the environment than myself--googled how to remove acrylic paint in a less toxic manner and one of the suggestions was rubbing alcohol.  I had some of that, so... 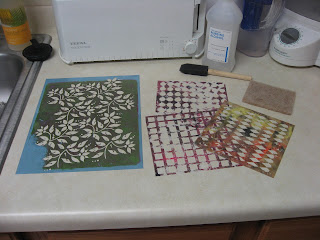 ...I tried it on a corner and it worked like a charm! 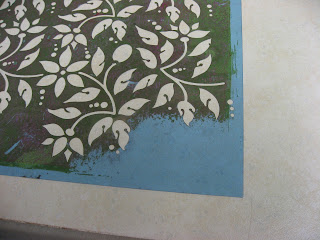 But I was going to need some more bottles and the cotton balls were catching on everything...and the foam brush started falling apart...and I hurt too much to stand there more than a couple minutes at a time so was getting nowhere fast.  (This clean corner was two very swift sessions--LOL!)  Leah and I were emailing back and forth--and came up with a possible solution (to follow).
****
In the meantime, I did at least get the holes punched in the signatures for the giant journal. 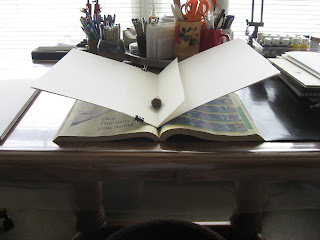 You can use a phone book as a cradle.  I clipped the template on, tipped it into the groove and punched...a couple at a time.  (Remember that movie What About Bob? and the "Baby Steps"--ROFL!) 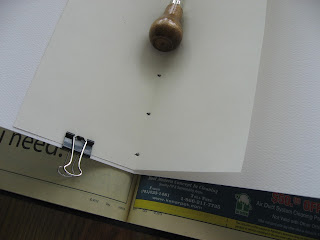 I still have to sew it together, but this gives you an idea of what it will look like. 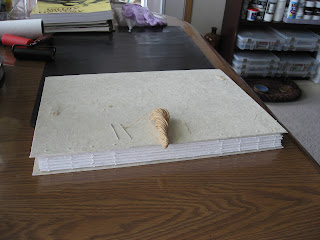 I picked out some waxed thread and am probably going to try using two needles--thread for each end's four holes at the same time. 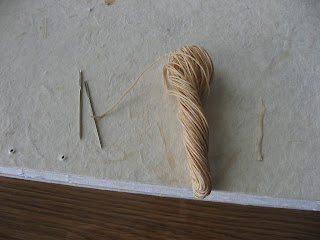 We'll see.  I have to watch videos just to try to remember how to do the coptic stitch binding in the first place and then see if I can figure out from there how to do both of the ends separately and at the same time.  Probably sounds like that makes no sense, but it does--LOL!
****
With this leg, I've basically been limited to doing only what I have to do--the usual things like laundry, cooking, being Karma's bug toy slave, etc.  The sciatica was improving--but then I did laundry Monday and that did set me back a bit.  So I have been going through the 21 Secrets workshops--watching the videos and taking notes.  I think I have nine left.  And I did get the signatures punched, so I am still accomplishing a little something, I guess.  ;)
****
Last night Dagan and Leah were here.  Leah brought her drill, screws & anchors, some more rubbing alcohol, and some cotton rounds.  (We were right--the rounds worked way better than cotton balls!)  Leah installed the two additional racks from Ikea for our punches (top and bottom ones are the new ones). 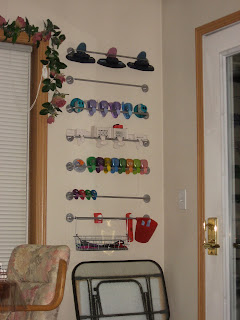 Then Dagan and Leah cleaned the stencils for me!!  TaDa!!! 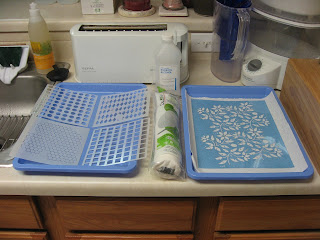 Leah remembered I had these two plastic trays and so they poured enough rubbing alcohol in one to cover a stencil, let it sit just briefly, and then with a toothbrush just swished most of the paint away!!  Was truly magical! 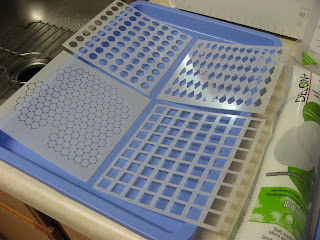 Then they picked that stencil out, rinsed it under water to get the loose paint bits off, and used the cotton rounds & rubbing alcohol to do the final cleaning up on the second empty tray. 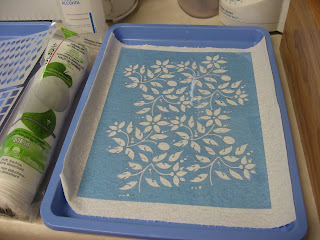 Dagan was doing the toothbrush and Leah was doing the cotton rounds and they were done in a matter of minutes!  This is absolutely fantastic!!  We have a system now for cleaning stencils.  They look practically brand new again.  Ahhh!  Thrilled...I am positively thrilled!!  :):)
****
And what was I doing up at 4:30 in the morning, you may ask?  Well, it's not only the sciatica.  It's true that my sleeping has been all off when the leg is more painful--and that comes and goes, it seems--but it's not all that bad tonight.  I just have things on my mind so that the burning leg annoyance was just enough so that I couldn't get comfortable and haven't slept at all tonight.  I don't like to say negative things about people, but one of those things is I'm just really bothered by somebody's words and actions concerning someone I loved dearly.  Enough said.  I was tossing and turning for a couple of hours--and telling myself that none of it really matters.   I know it is all moot in the larger scheme of things...but it still kept me awake...with some leg pain for good measure, of course--LOL!
****
Funny how we do that sometimes in the dead of night.  Waste our time obsessing over things we have absolutely zero control over...and that really, when you think about the source, are not the least unexpected or surprising.  But it's like we have to mill it out of our system or something.
****
I shall work on releasing this.
I hate the negative weight.
I do not want to carry it with me.
It only hurts me.
Makes not one whit of difference to the person I wasted this time over--LOL!
****
See?
How silly.
You cannot change other people.
****
But you do not have to like them.  ;)
****
We all have those vulnerable heart spots.
I need to be stronger.
****
"The weak can never forgive.  Forgiveness is the attribute of the strong."
Mahatma Gandhi
Posted by Rita at 6:30 AM