Okay, this is proof of how (artfully) conservative I have normally been all these years.  This week the Artist's Playroom challenge word was bizarre.  Believe it or not--this felt totally alien and most bizarre to me the whole time I was doing this.
****
You may remember for one of the 21 Secrets workshops I made up this manila envelope journal (there are drawing papers inside for pages).  We had to put a couple layers of gesso on the manila envelope cover...and then next we were supposed to scribble with watercolor crayons all over it.  Scribble.  Then blend with a damp baby wipe and finally rub with a paper towel.
****
Well, I wanted to try the gelatos I have barely played with so I grabbed those.  They were very pale--as you can see more so on the inside of the flap. 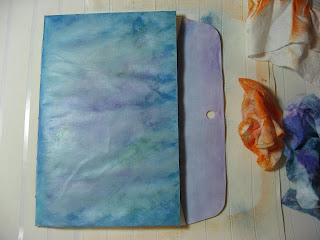 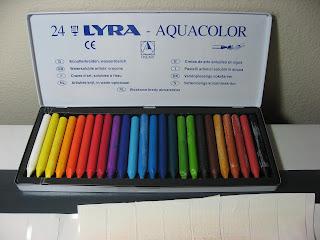 Then on the backside I did a different color scheme (which seemed richer without that first layer of gelato sticks the front cover had).  OMG!  I couldn't believe I was doing this!  And it was fun!!  :) 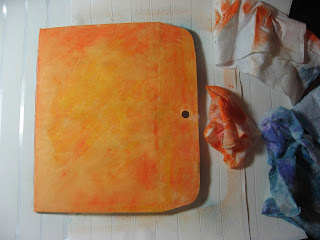 Something else that seemed bizarre to me...I used white cloth hockey tape and taped it all over some pieces of butcher paper... 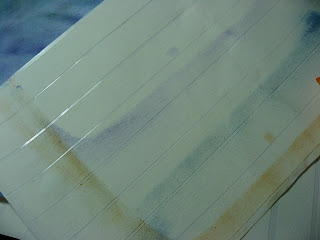 ...to use as table and page protectors as I worked.  My own version of making my own washi tape.  Not sure if it will work well or not, but this was also something that seemed so odd (bizarre) as I was prepping the butcher paper that it made me giggle to myself thinking of how, the very first time I have ever touched the stuff, loyal hockey folk would probably be appalled by what I was doing with good hockey stick tape--LOL!  This is hockey country, you know.  ;) 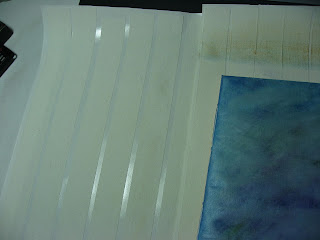 And then...I had just mentioned to someone last week how I miss what's going on around here even when I am sitting right there by the window...and, shortly after I had made that pronouncement, I looked over and saw this!  No lie!  A fire truck and ambulance...practically under my window.  I had totally missed them arriving and I was sitting right there!  In my defense, the fire alarm hadn't gone off--LOL! 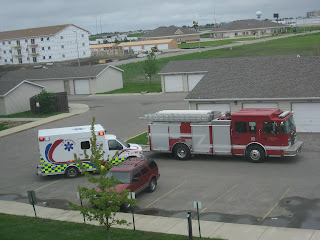 A few days later...I did notice a police car come zooming in...but...had missed the other police car and the ambulance that were already sitting there!  Good Lord! 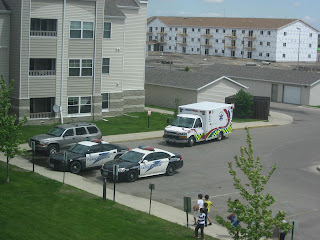 I prefer to think it is because I am so absorbed in whatever I am doing, right?
****
But I wished I had missed this. 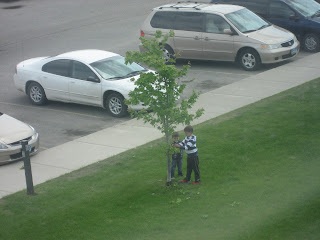 Older brother teaching younger brother how to tear leaves and small branches off one of our young trees. 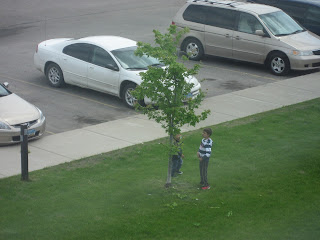 If you click to enlarge...that younger brother is way to old to be sucking on a pacifier. 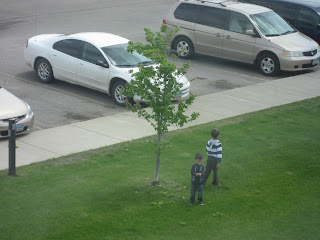 I know they live at the end of our hallway because the pacifier boy opens their apartment door and stands in their doorway and cries and cries...right in the open doorway.  They just ignore him.  As they do when he's outside and cries and cries.  All with the pacifier in his mouth.  That useless pacifier.  Too bad the rest of us aren't able to ignore him as easily as his family.  ;)
****
We went right back to chilly rain yesterday. 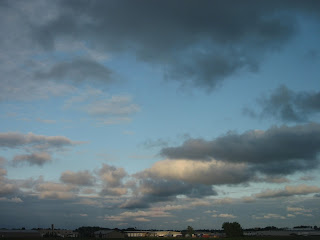 The storm clouds roll past... 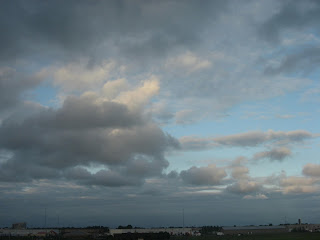 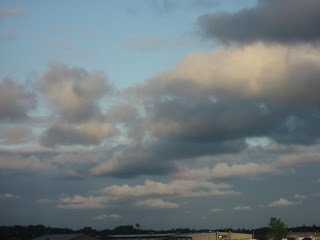 Supposed to have thunderstorms again later today, too.  But the temps are supposed to jump up about ten degrees to around 60 at night and close to 80 during the days.
****
Miss Karma wanted to be warm under the throw. 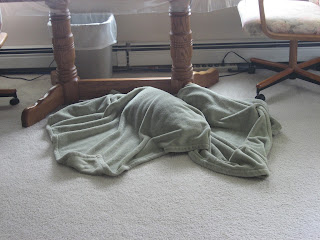 She peeked out for a while after snoozing a couple hours, but crawled back under for a couple more--LOL! 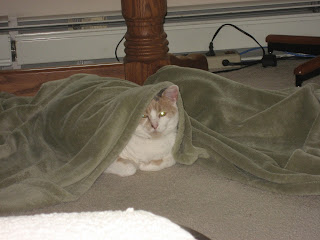 Since I am not up to standing for the gelli plate...I may do some more of this bizarre scribbling and baby wiping.  With the help of the 21 Secrets workshops, I may just beat back my OCD tendencies and become a loose woman yet!
****
Have a fun week!  :):)
****
"Begin growing from where you are - not from where others think you ought to be by now."
Steven Douglas Lawrence
Posted by Rita at 11:30 AM

I laugh every time I see Karma under the blanket. And peeking out to make sure everything is under control. I think that is a perfect NORMAL way to use hockey tape, Rita. You are not... bizarre... at all! :-)

There is nothing worse than livingin close quarters with a neglected child...makes you want to grab ther parents and scream! LOVE the picture of Karm peeking out from under the cover, I think it's a hoot that she loves to sleep under the throw! waving hi from the hills of North Carolina ♥

go throw your skills about, will you!? :)

I would email those photos to the building manager of the boys ripping up the leaves. But then I am a mean old woman.
You are getting less OCD at the time..good for you!
I had to laugh at the hockey tape..but if it works why not!
Have a great week! :)

I'm incapable of ignoring a crying child. That little guy will probably grow up to have abandonment issues. It doesn't matter that the family is there. Ignoring a person makes one feel abandoned. And it's so sad that no one teaches them to respect trees.

We used to call the pacifier "the plug."

Glad to see you playing with your art supplies ♥ I did a crazy doodle with makers today and that's about it. Had errands and other things that got in the way .

Did you ever find out why the police, ambulances, and fire truck were there?

Poor kids. I feel sorry for them...and for you...having to endure the cries of a child whose parents don't seem to care. :(

Love the pics of Karma. She sure is enjoying that throw. lol

Hope you have a good week, both health wise and weather-wise.

So sorry those two kids have such inept parents. They need to wake up before it's too late.

You are so talented, and I know Miss Karma is, too. Has she ever tried paw painting, or anything like that?

So sad about the unsupervised boys!!! OF COURSE they're going to get up to no good with no one around to teach them anything! So sad, and even more sad that it's become the norm now!! Grrrr!!!!

Karma looks like she has the right idea! WTG, Karma!

Sounds like you are feeling a bit better. I "LOL"d when you keep referring to yourself as loose. No idea why, but it cracks me up! Have fun and get messy!

Great that you got "bizaare". And the tape idea is great. I don't think I'm going to make it for the challenge this week.

The whole thing about that child is sad.

Dear Rita, for about three weeks, I've been away from reading blogs and so I've returned this morning to yours and discovered that you've been so buy working at becoming "loosey-goosey!" As you know I'm going to work on that also. The paints came and I'm getting ready--a little tentatively, a little nervously, a little gauchely--to begin. I'm going to be learning how to do this by following your blog! Peace to you and a big meow from the cats to Karma.

how funny that Karma is still under the throw... and the leaf ripping children sound like they are no fun at all... going to be a long summer perhaps...xx

I enjoyed your pos, and don't envy you your neighbour boy.
I also enjoyed your bizarre take on the APR theme ov Bizarre.

As long as the ambulance isn't there for you - it's okay to miss it.

:) They play ice hockey in Tampa Florida now... it just boggles my mind. :)

Love your experimental approach! Karma as usual trying to steal the show, what a sweet cat she is :)

I have made my own "artist tape" as well! I used fabric and paper bandage (medical) tape! I never thought of hockey tape! Good one!

so much fun to BE there with you. I love your envelope experiments and hope you save those baby wipes. I have been using up my stash so I am thinking I just need to paint some stuff to make a new batch. I used them to make my giraffes and a non paper postcard and also a bookmark. most of my stash, though, I gave for the kids I was teaching at the museum.

have a BEautimous day in your own little World!!
xoxo

What a wonderful and funny post - although I wanted to smack the hands of both of those boys. Ahh - the joys of living in close proximity to others. Keep having fun - it's actually the best way to discover!

Enjoyed reading your post and the amazement of seeing the various vehicles just outside the window and I am sure the family should start giving attention to the pacifier boy. The colors you created are wonderful.

Doesnt sound as if that boy is being raised the right way. Sad, when it is possible to raise kids to be good..... sigh.... makes me sorry to see such things.

What a frustrating situation to live down the hall from a neglected child who cries all the time. The fact that the parents don't do anything would be enough for me to call CPS and have a welfare check done on the child. When I see kids being destructive like that I wonder what they will be like when they are older. Hopefully their lives will turn around for them.

On a more positive note, I loved how Karma was so nice and cozy under the blanket and then peeked out for you. Such a lovely cat!

Ha! Love Karma under the blanket!!