We had a couple sunny days this past week (including my trip to the dentist day--go back Monday the 24th to fix the filling)... 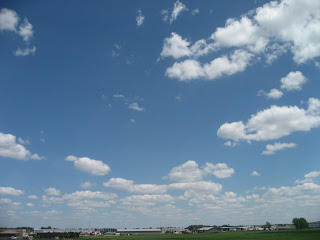 ...but most days were a mixed bag or totally overcast. 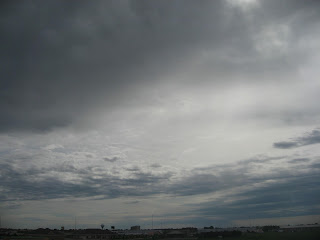 It did jump up about 10 degrees this week, though--from 70/50s to 80/60s.  Hot enough that I shut the place up and put the AC on.  I've kept it closed and after a couple days--well, my bones started to feel a little better--LOL!  So, for now, I am keeping it closed up.
****
Note: Just thought I would let everybody know that the Pacifier Boy (who sometimes doesn't have the plug in his mouth, BTW) is not deprived or lonely.  From what I can tell, he cries because if he just cries long enough he finally gets his way.  That's him in the motorized car. 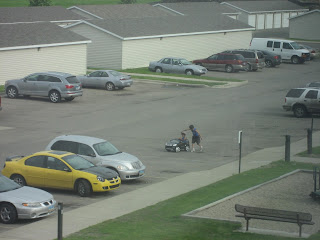 Center of attention and very happy zooming around the parking lot.  I have no doubt he probably stands in his apartment doorway crying because he wants to go drive his special car.  So don't worry about him.  The parents have just taught him what works in their family. 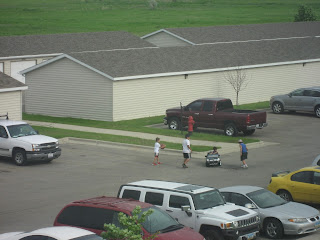 Anyways, Dagan and Leah were here on Wednesday.  Leah wanted to make a bigger phone pouch (hangs on her belt) for her new cell phone.  The one she bought for her old phone is on the left.  Leah got the pattern made and cut out of the neoprene on the right...but that's as far as we got.  :( 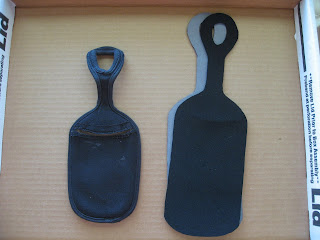 Some of you might remember all the trouble I had with the quilt store sewing machine repair guy in town...well, I knew it still skipped straight stitches here and there, but I was hoping it would work okay using the zig zag.  Nope.  In fact, it got worse and worse until it was missing half an inch of straight stitches in a row!  *sigh*  We read the instruction booklet and tried everything we could think of to no avail.  So Leah took the machine with her when she left and is going to drop it off at another place in town--Blow's Sew n' Vac.  [Such a funny name! I know. I know. I am so juvenile--LOL!]  We'll see if it is just too old to fix or not.
****
My mom bought me my sewing machine when Dagan was crawling, so it's 38 years old.  With his heart problems he was so skinny and then he's long waisted to boot--so it was impossible to buy him baby clothes where he didn't look like he was a drowning in fabric little stickman.  I sewed most of his clothes for several years--lots of jumpers, overalls, and knit t-shirts and pants.  Does anyone else remember the Stretch&Sew stores?
****
From the time I began sewing I let him pick out the decals for the front of his overalls or the breast of his one-piece jumpers.  Guess what I found in the box of sewing paraphernalia? 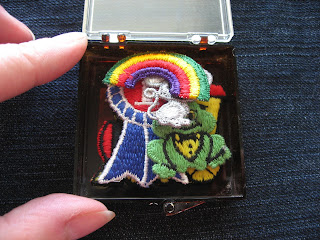 I wish I had a picture.  (I usually seem to forget about the camera when I have company.)  There was my Dagan--38 years later--looking through these decals and smiling.  I remember standing in the aisle at the fabric store with Dagan on my hip taking down the ones he wanted to see as he seriously made his final decision on the one or two he could pick.  We spent a lot of time in fabric stores back then.  :) 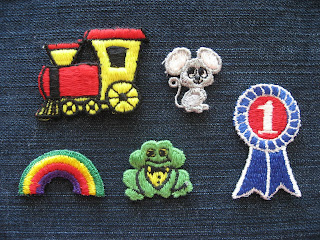 I do remember the next one he wanted me to use was the train.  But then, before I could sew a new outfit, he decided he wanted to be a big boy and use the potty chair...and those jumpers and overalls just drove him plum crazy.  He wanted pull-on pants, of course...and these embroidered decals have waited in this old Avon container for nearly four decades...just to be held in Dagan's hands and see his smile again.
****
Miss Karma loves the heat.  I pull back the chair cover on days it looks like it could rain any minute so that she can use the chair...to bathe... 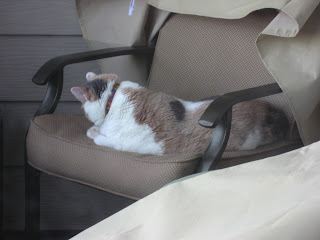 ...or take a toasty snooze. 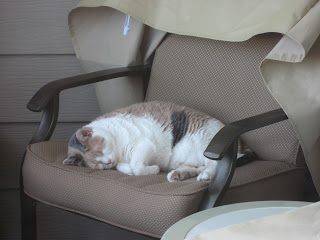 I have the table all set up for playing with the gelli plate this weekend.  Thinking positive, right?  (This will be a real sciatica test.)  Wish me luck!
Have a glorious weekend!!  :):)
****
"It is not how much you do, but how much love you put into the doing that matters."
Mother Teresa
Posted by Rita at 10:57 AM