Do you see the cloud hedge? 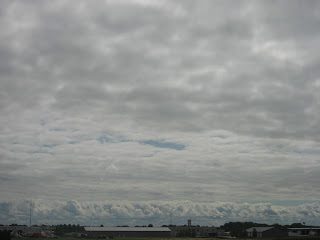 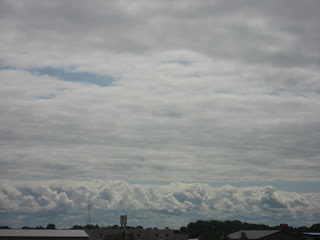 ...all along the horizon.
Little things make me smile.  :) 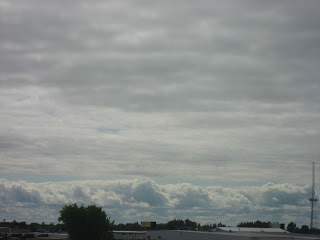 This machine loaf is a potato bread recipe I was given by Connie over at Far Side of Fifty. 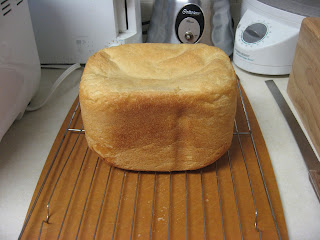 The top kind of collapsed, but it fits better into the toaster--LOL!  I grabbed Leah's old yeast, so that may be why it is flat-topped.  This bread is so moist I don't even have to toast it to munch it down.  Thanks, Connie!!  Delicious.
****
Since I knew I had red towels coming from IKEA (yes--RED towels--going wild and crazy over here!), I decided to take down the shower curtain I bought in 1990.  Nothing but a clear liner now, so this ultra shy girl needs a bright new shower curtain pretty soon--LOL! 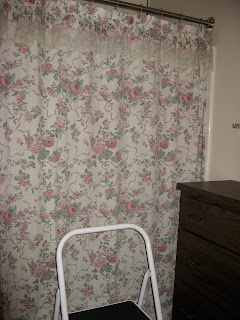 I also took down a lot of pictures off the walls (that won't fit with my plan for that new bright color scheme--not that I have much wall space to begin with--LOL!) and hauled them out to the garage.  All this change had Karma wound up tightly, as she doesn't care much for big changes...or company, for that matter.
****
I thought I'd take a before picture of the art desk area. 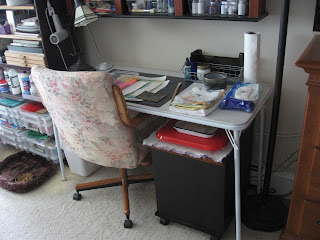 I am so excited!  Dagan and Leah called from Minneapolis and said there was a desk--well, a table that I will use as a desk--almost identical to what I had picked out but with a glass top!  Which is what I wanted in the first place!  And it was the same price--$39.99!  Awesome! 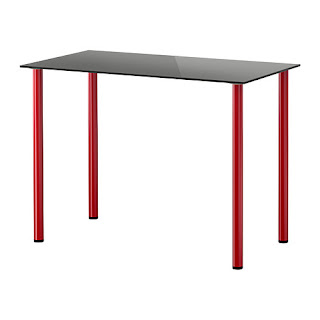 It's a little smaller in width, but it has a glass top!  Nothing better for an art table in my book.  (Notice the black top and red legs...a red accent theme, ya think--lol!)
****
Anyways, I pulled out the chair to get a better shot of the "before" folding table and Karma came racing in (from the disturbed bathroom she had been fussing over) sounding like a herd of angry horses and flew up on the chair ready for a fight! 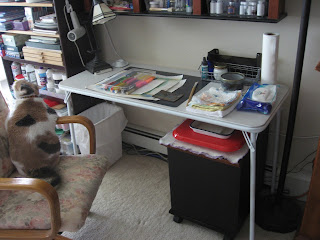 If there had been another cat around she would have beat the crap out of it...you know that kind of cat mood? 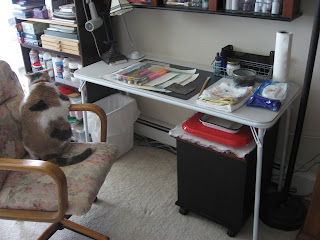 I have told you that Karma is moody... 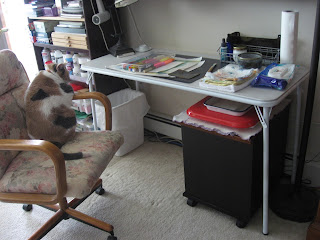 ...but I so seldom happen to be taking pictures... 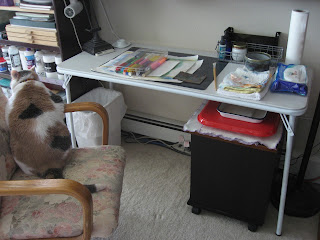 ...right at the moment she is majorly pissed off at me for messing with her world. 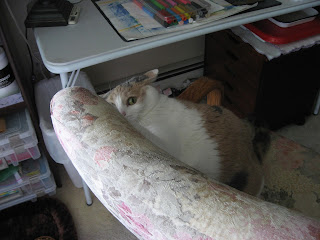 I told her to knock it off. 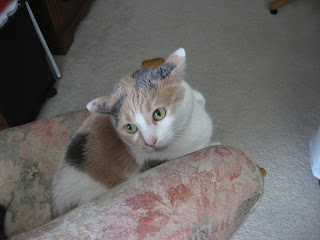 She was not happy... 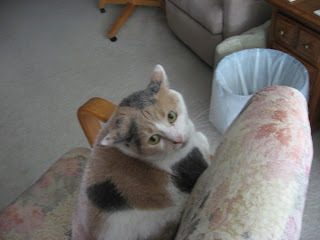 ...but when she saw I wasn't willing to play her victim cat... 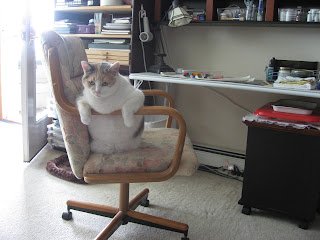 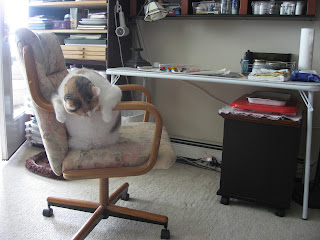 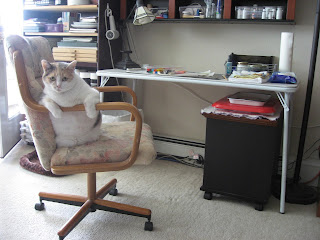 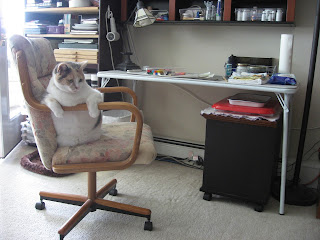 I told you she is highly opinionated and moody--LOL!  There's some proof!
****
Meanwhile, I tried once more with this gelato sticks and smearing them with baby wipes technique for a background. 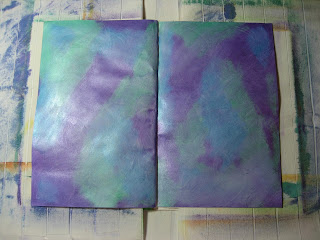 I just don't think I have the knack or something.  Or maybe it's because I have metallics.  They're okay, but I think it just makes me want to get out my watercolors.  ;) 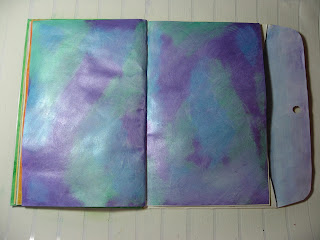 Dagan and Leah brought Leah's brother Aaron to the airport Sunday morning.  He was home on leave from the Navy before heading off to be stationed in Japan!  Wow!  Talk about an adventure!
****
This morning before they went to work Dagan and Leah dropped off the table top... 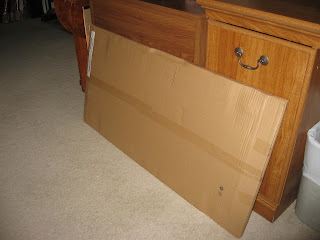 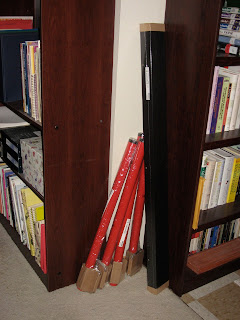 ...and I have red towels in the washer (second time--trying to reduce dye leakage).  And the library lady emailed this morning.  Her volunteer, Holly, is gone already and never told Pam about our book date.  So Pam should be here any minute.  Gotta fly!  See you again soon!  :):)
****
"Laughing is the shortest distance between two people."
Victor Borge
Posted by Rita at 11:46 AM

like that red legged table! and your cloud hedge.

That is ONE TEED off cat! I've seen that look. Bleubeard has resembled that look. And it's not a fun thing if you're on the glaring, hissing end of it, either.

If I'd had those towels, I would have added bits of muslin or old bed sheet bits, and dyed them for future art projects while the towels were washing. Maybe THATs why I love red so much, too. To say I'm jealous is an understatement.

That bread looks YUMMY. And I've never seen clouds look like that before. You find such fascinating cloud images.

Oh my goodness! I think Miss Karma could join me in my kickboxing class and scare a few people! Poor baby- her world was disturbed and she had to fight back! Oh, that made me smile-

How well I know about cats displeasure with any kind of change in their environment. :) Love the new art table and can't wait to see it up and in use. I have a long standing love affair with the color RED ♥ And so very happy to hear that you have the library issue straightened out.

Wow! Karma is really spitting fire! I wonder what she will think of a glass top - will it appear to magic holding things up over her head? :)

Karma is adorable. Moody, but adorable. One of our cats is a calico, too, and she's on the small side. Very cuddly, and oh-so-very spoiled. As is her tabby "sister".

I'm also a nut for splashes of red. I have a high-dollar (i.e. one buck at a flea market) red watch band on my Timex that pleases me to no end, and a red leather hippy purse that I use almost exclusively. What can I say? Red says "happy". That new table of yours with the happy legs is gonna be super.

Lovely new table, I like the red scheme.
Red is a favourite colour of mine too.

Love Karma's ears! Those horizontal ears are a sure sign someone's not happy. So funny!

I think it's a good idea to change things up every now and then. However, my current change should do it for me for a looooong time! LOL

I think I am in love with your round pale calico cat, Karma. OMG.
That is all I have to say about that.
~Dawn

So glad you liked the bread it is our favorite go to bread machine recipe.
I like red too..it always cheers me up. Poor Miss Karma Crabby Pants ears off to the side and everything..silly girl:)

Those cloud pics were cool!

I loved those pictures of Karma and her many moods and expressions. She has quite the personality. LOL

The bread looks good. Wish I had some right now. :p

Red...that's a wild color. Have you ever tried those Shout Color Catchers? I use them often. They work well when you don't want to seperate your smaller loads of laundry.