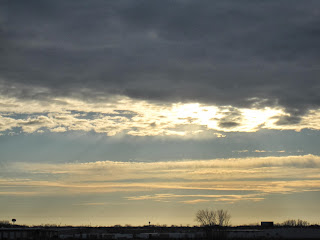 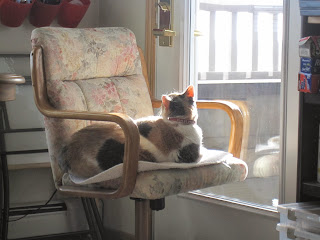 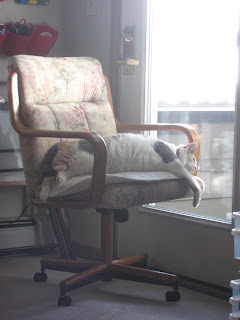 ...so Karma could catch the last rays. 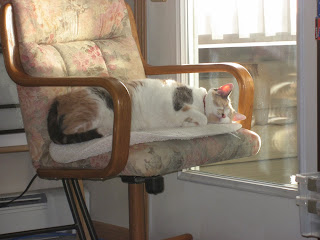 Woke up this morning to the first little bit of snow I've seen. 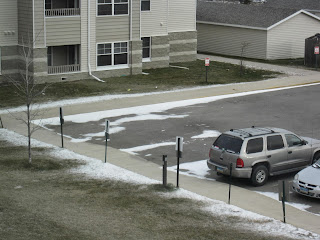 It's 14 degrees right now and solid grey outside.
****
I did get all the card fronts cut out. 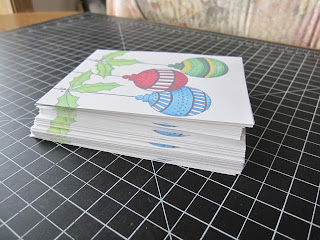 And Dagan and Leah approved my tiny bit of bling idea so I'll start working on that.  Saturday (with or without me, I never know how I will be for travel) Leah's planning on going to the craft stores to buy card stock, etc.  I've been feeling pretty decent so the odds are favorable.  ;) 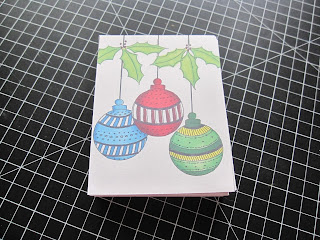 We got sidetracked last night.  I blame David Blaine.  I had recorded his TV special and we ended up watching that while we ate dinner...and until it was done--LOL!  Since Dagan and Leah didn't arrive until after 7pm (Leah's working the later shift again) and it was quarter to nine before we were finished being grossed out by Blaine being amazed by the talented crazy man...I just wanted them to help me with the junk drawer box.
****
They certainly did!!
This box had been piled high and was overflowing!
Looks pretty good now--TaDa!! 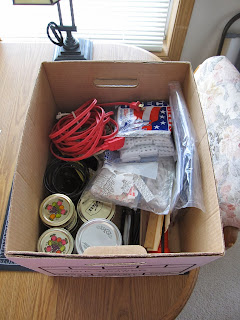 We threw a lot of things away and I have these three bags for give-away. 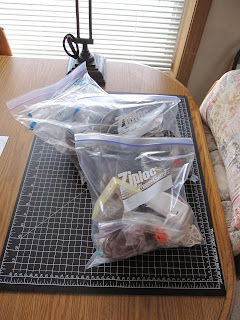 And Dagan had a surprise for me!! 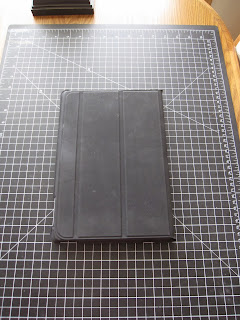 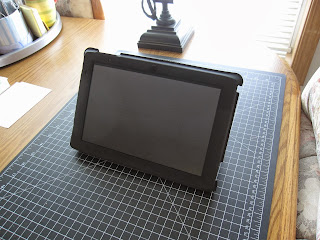 Leah will help set it up more and explain things to me on Saturday after craft shopping...but WOW!  Happy me!!  A new toy!  I've never had a tablet before.  Nice!  :) :)
****
Caroline asked to switch to today instead of Tuesday.  That happens sometimes with her new job (she has two positions there now) and I certainly don't mind.  I'm always here, anyways.  I'd rather have her than get anyone new, of course.  Caroline has been coming to clean every two weeks for must be around seven years now--maybe longer.  :)
****
Anyways, another shorter (for me) post.  Hopefully I will have things to show you on Sunday, for sure...unless plans change, of course.  Leah does have plans earlier in the day and they could possibly go long.  We're always flexible.  But for now--today--I am exhausted.  I wondered why I was wide awake at 2:30am and couldn't get to sleep--sure Dagan and Leah were here a lot longer than they normally are and left at almost 11pm and I do need time to unwind, but 2:30?  Then I remembered I had shut off my pill alarm...but had forgotten to take my melatonin.  So I took it and got to bed by 3am.  I guess I do need to take it, don't I?  LOL!
****
And, since I've turned into a day person, Karma has morphed into one of those cats who wake you up for morning food (her treat of a tablespoon of canned food).  She sometimes cries annoyingly in the hallway but keeps her distance.  Knows better than to try to jump on me or anything so intrusive...and risky.  If I tell her "No!" she usually stops...after a couple more cries as a show of protest and defiance.  (Karma finds the obvious display of her subordinate position hard to swallow.)
****
But if it gets to be a late morning for me and I am snuggled in bed past about 9am...Miss Karma has been known throw herself on the kitchen floor and cry piteously...where she pretends there's no way she could possibly hear me telling her to shut up from that great distance.
****
Oh--did I wake you?  So sorry.  I was just crying to myself in my misery as I was wasting away from this dire hunger...but I am so delighted that you're here to save me!  (leg rub...leg rub...purring loudly...sucking up)
****
Sometimes she wins these occasional morning battles now that I am a day person.  But don't let on that I told you.  I am still the boss around here.  ;)
****
Have a battle-free day!!  :):)
****
“I hate to be a kicker, I always long for peace,
But the wheel that does the squeaking is the one that gets the grease.”
From a poem by American humorist Josh Billings (1818-1885)
Posted by Rita at 11:29 AM

i like your description of karma's early morning routine. :) song and dance.

Is that a heating pad on the chair that Karma's laying on? What a hard life!!

Your tablet looks big. I have a small one that I'm always curled up with. I think I have a permanent dent in my gut from it. Can't be healthy, can it?

I look forward to finding out how to like the tablet. And your description of Karma's activities is really funny. I'm glad your posts are shorter, since they are so much more often! I can barely keep up. :-)

Karma is such a cutie and she knows how to get what she wants!! lol

I haven't been around for awhile ( sorry ) but some things don't ever change, Karma is still spoiled rotten! lol I can see how hard her life is on her heated chair pulled over to the window! lol waving hi from the hills of North Carolina ♥

Karma knows how to throw a tantrum. Please let me know if you like the tablet. I always wonder if there's something about them that makes them better than laptops.

I see you latched on to my "rolling office desk" idea to keep in the sunshine!

:) Hope you enjoy the tablet! I love my Nook!

Enjoy your tablet!!! Some day I will have one too :) My cat wakes me up by gently placing a paw on my face while staring deeply into my closed eyes. He will sometimes give very soft meows too. Funny how cats learn that they have to be gentle with us.

(Karma finds the obvious display of her subordinate position hard to swallow.) This made laugh, and hard! Poor baby! I can imagine her meowing piteously- gotta love our sweet animals and their personalities!

I am certain you will like that tablet! Poor Karma starving to death whilst you are lounging around in bed. LOL animals can be so funny:)

You're so creative - those cards look wonderful!

Lucky you and a new tablet. How awesome. I believe you will probably love it. My friend Sally loves hers.

Poor Karma. So mistreated. Bleubeard sleeps with me, so when I move, he wakes and is ready to go. Even if it's still "early morning night time."

To answer your question, yes, I plan to sew the folders together, or bind them together if they are too thick to sew. I'll have to use my awl to make a few holes, then string some fancy fibers through the holes, if I do it that way. Thanks for asking.

Enjoy the tablet. I hope to have one someday.

Have a great weekend!

Tim has a tablet but he says he rarely uses it so I am going to ask him if I can have it to use for a while to see if I like it and if I would like one for myself.

Now Karma what can I says she is so bloody adorable

Have fun with the tablet, but I was thinking Jeannie gave you her old Kindle last year? About the only one who uses my tablet is Ryan (my 4 year old grandson to those who may read this and don't know me). He loves playing games on it.

I am in two minds about our tablet. Well, I don't enjoy using it much, but I think I might like an iPad better. On the other hand, I'm not about to spend all that money on something I THINK i MIGHT like better! LOL

I can just picture Karma thinking those things as you're getting her food. ;) She looked so relaxed laying in the sun. Your cards turned out beautifully, Rita!