I brought this box home from Dagan and Leah's a week or so ago.  You may remember Leah picked it up for me at Target.  :) 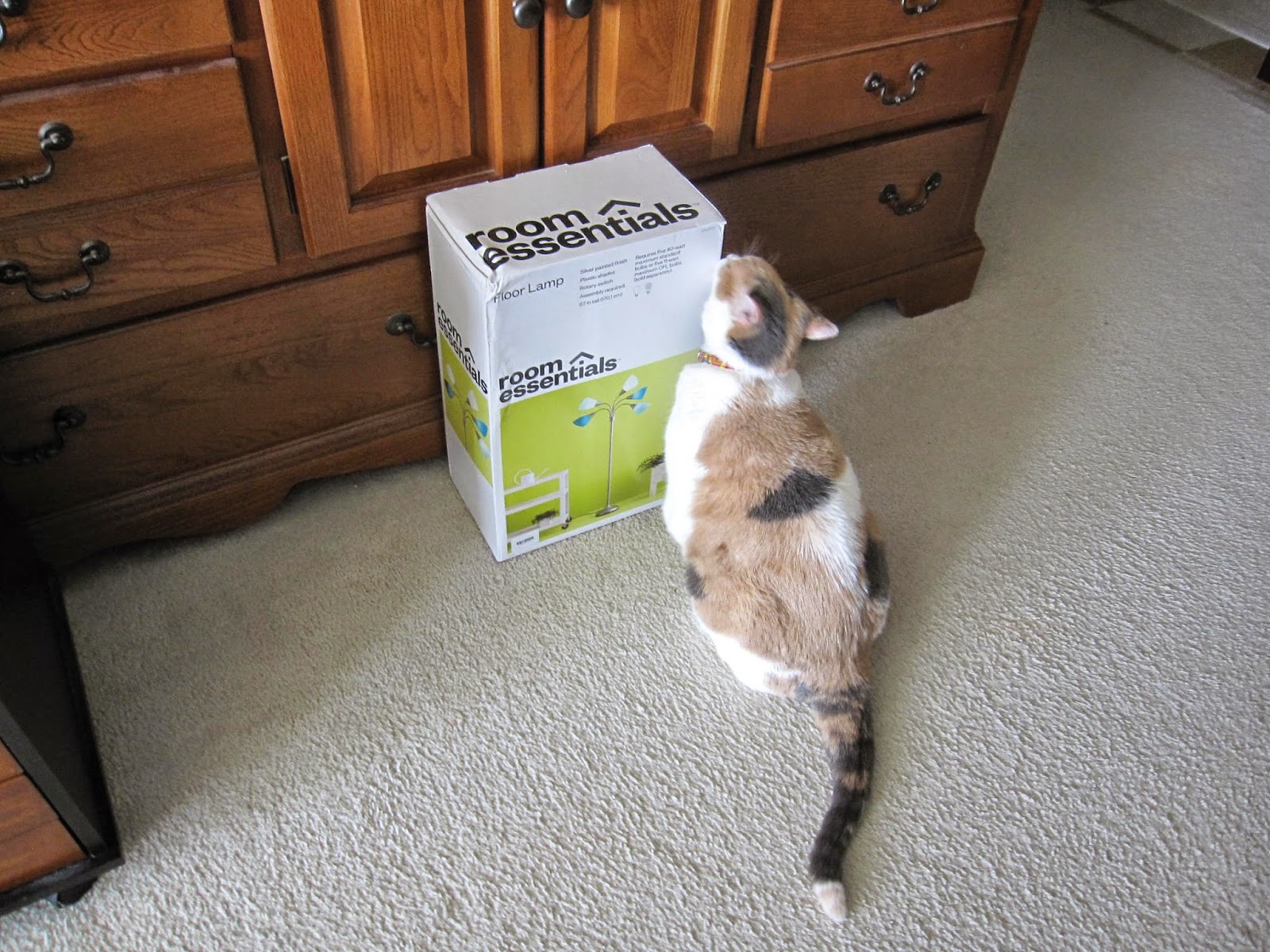 Karma gave it the full inspection. 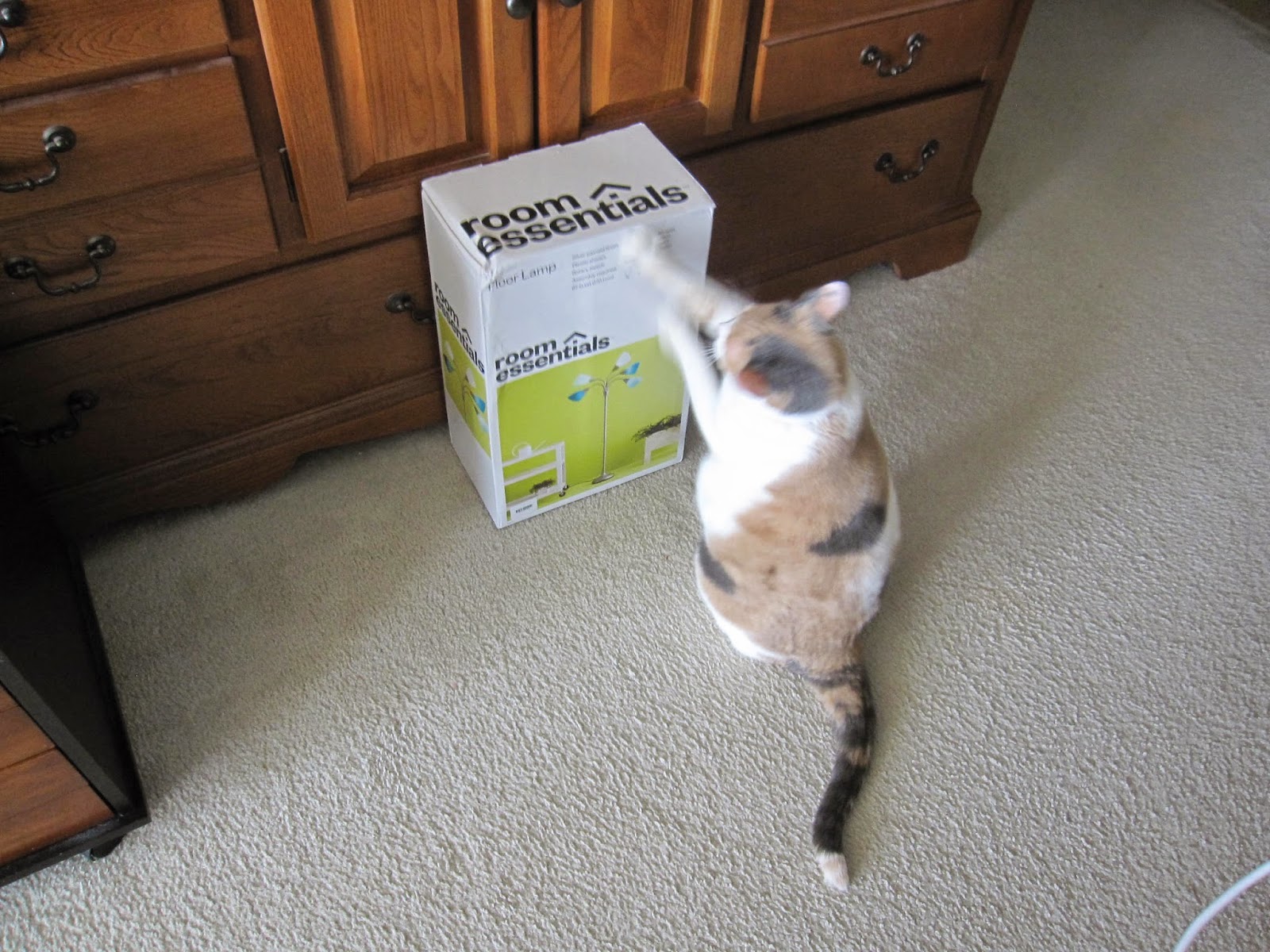 Noise in the hallway... 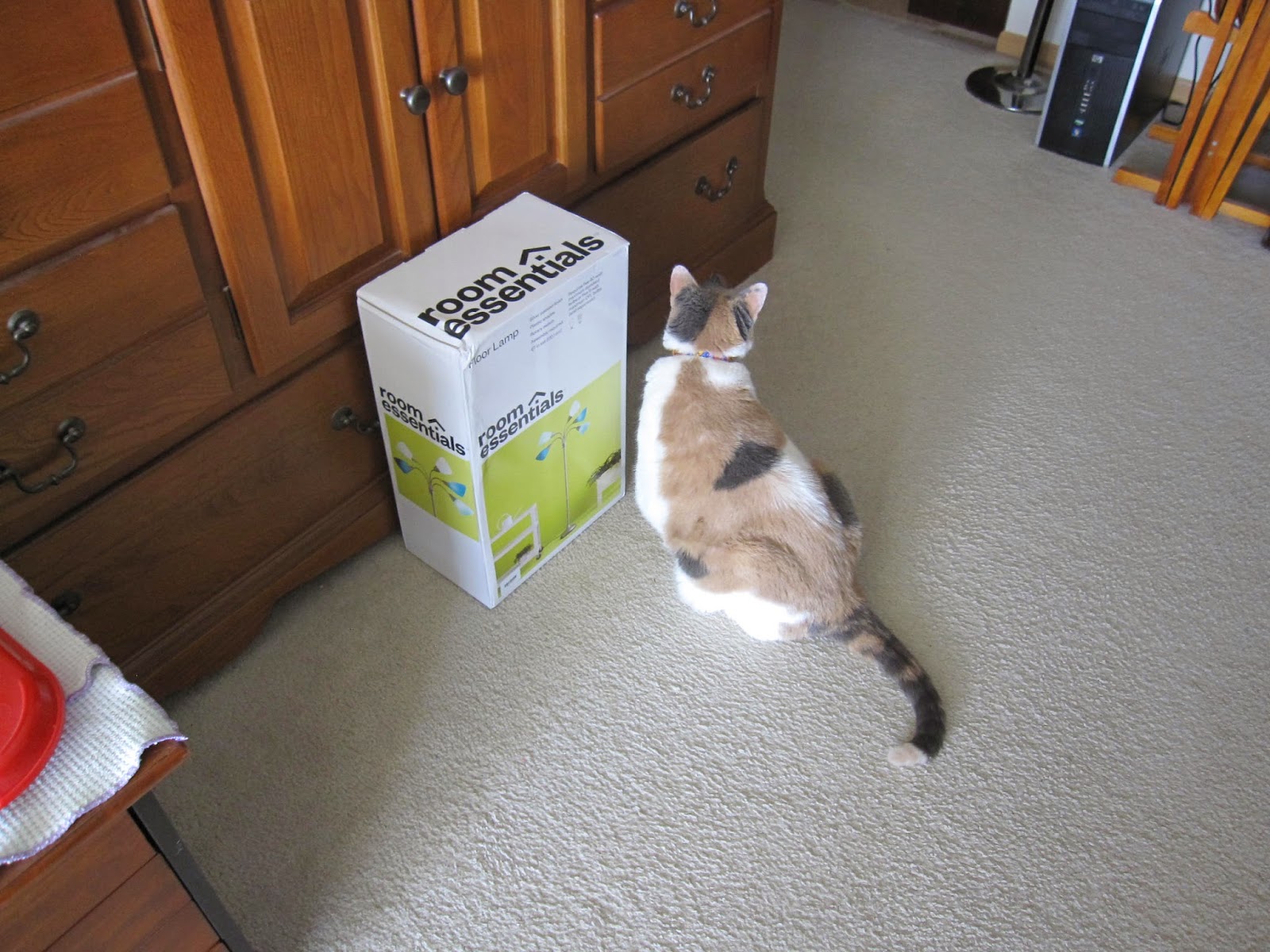 ...back to sniffing and face rubbing. 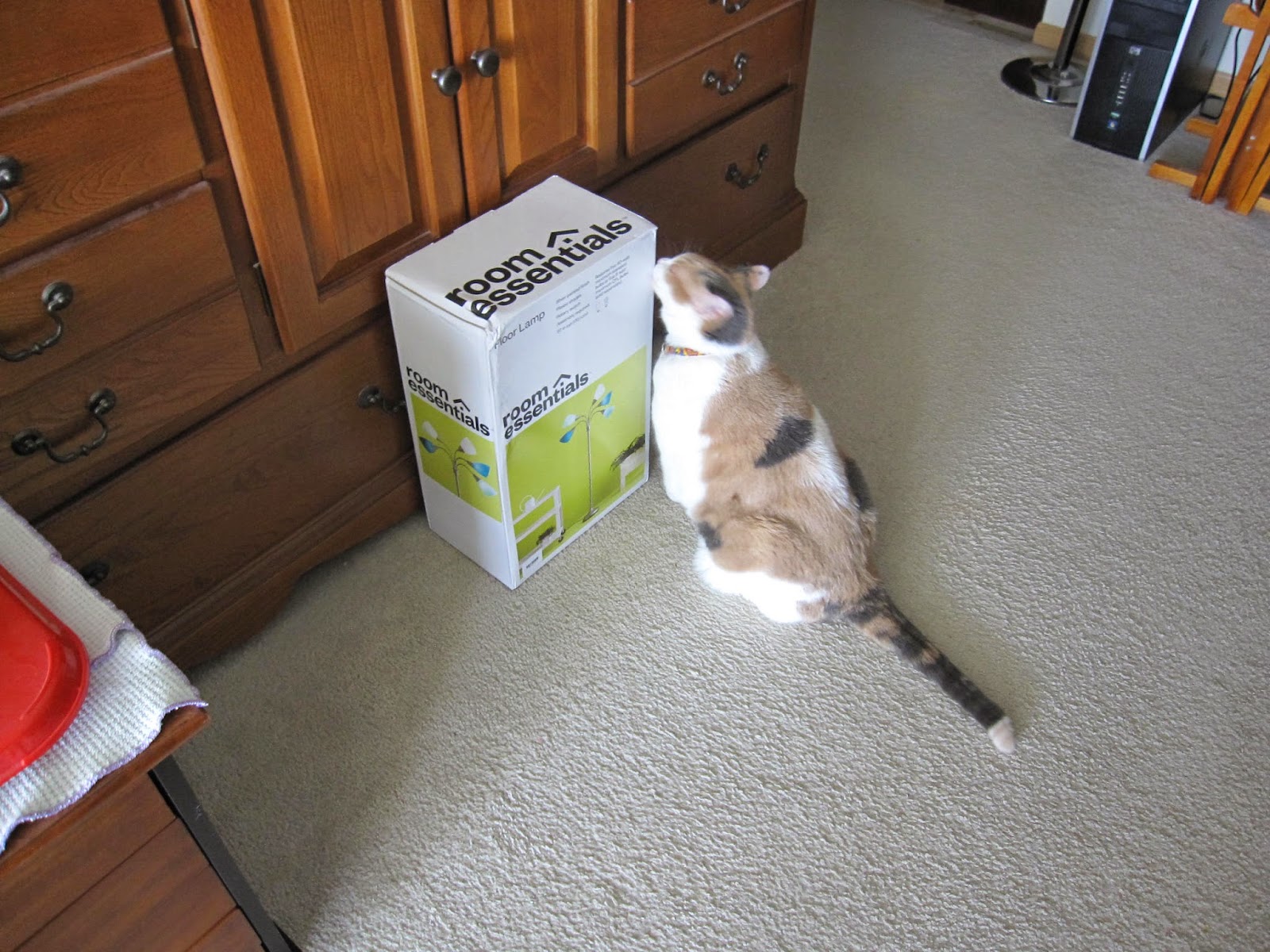 It's a cheap 5-arm lamp (on sale for $13.99) that may have believed it was created to live in a spicy dorm room...but will live quietly here with me and shed light upon... 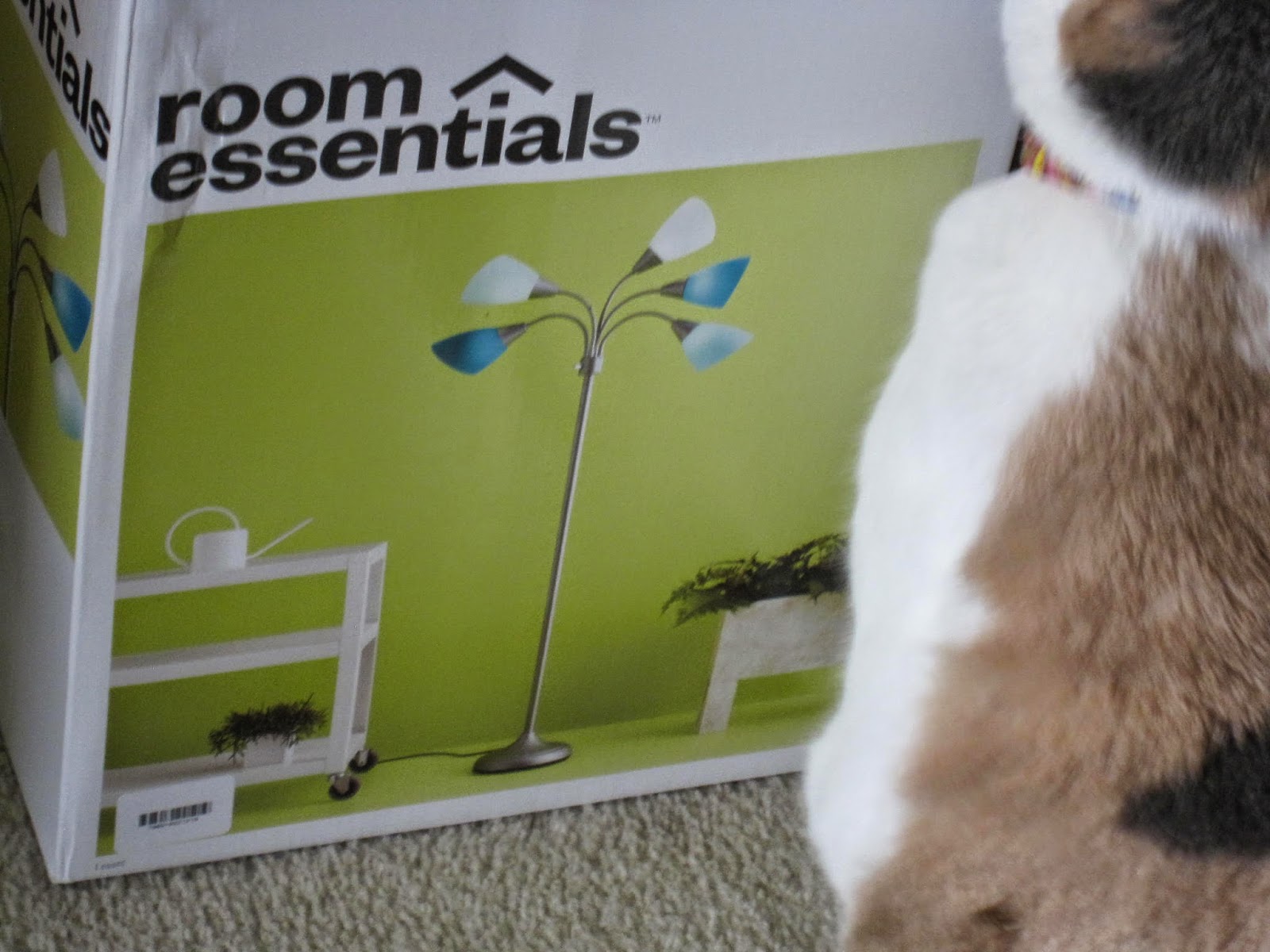 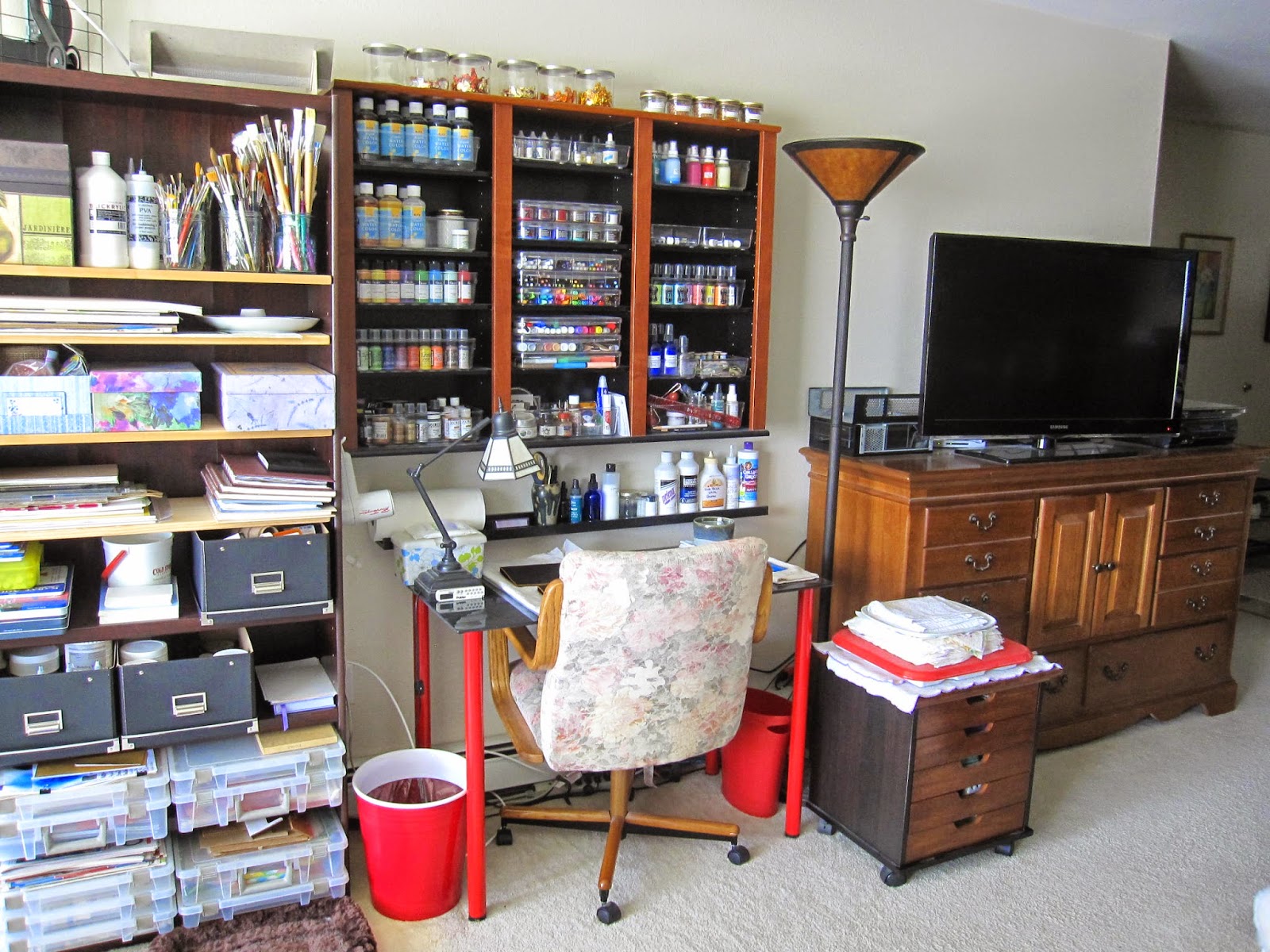 I've have this spotlight desk lamp, which I love... 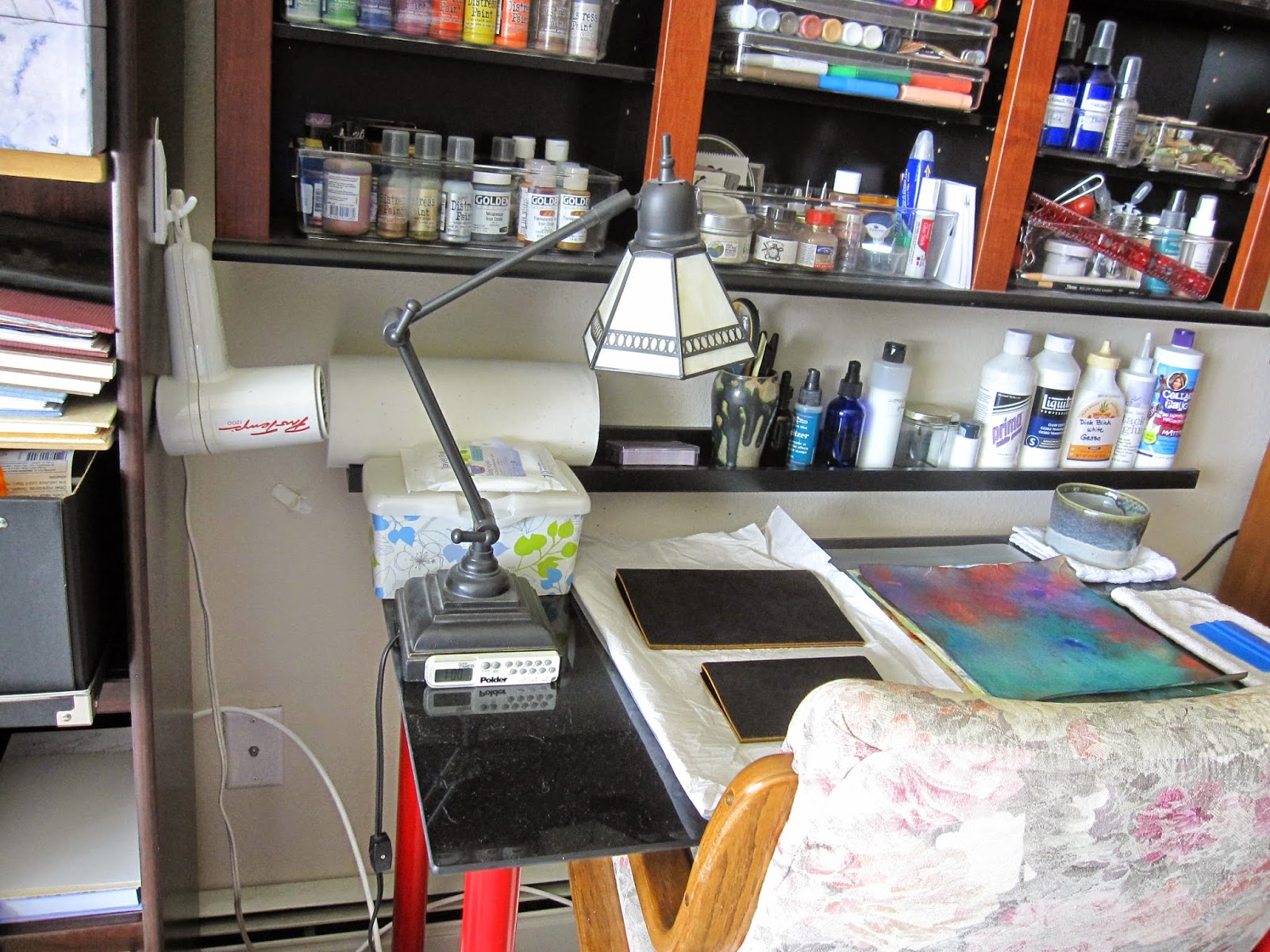 ...and this basically useless (except for general, ambient lighting) floor lamp. 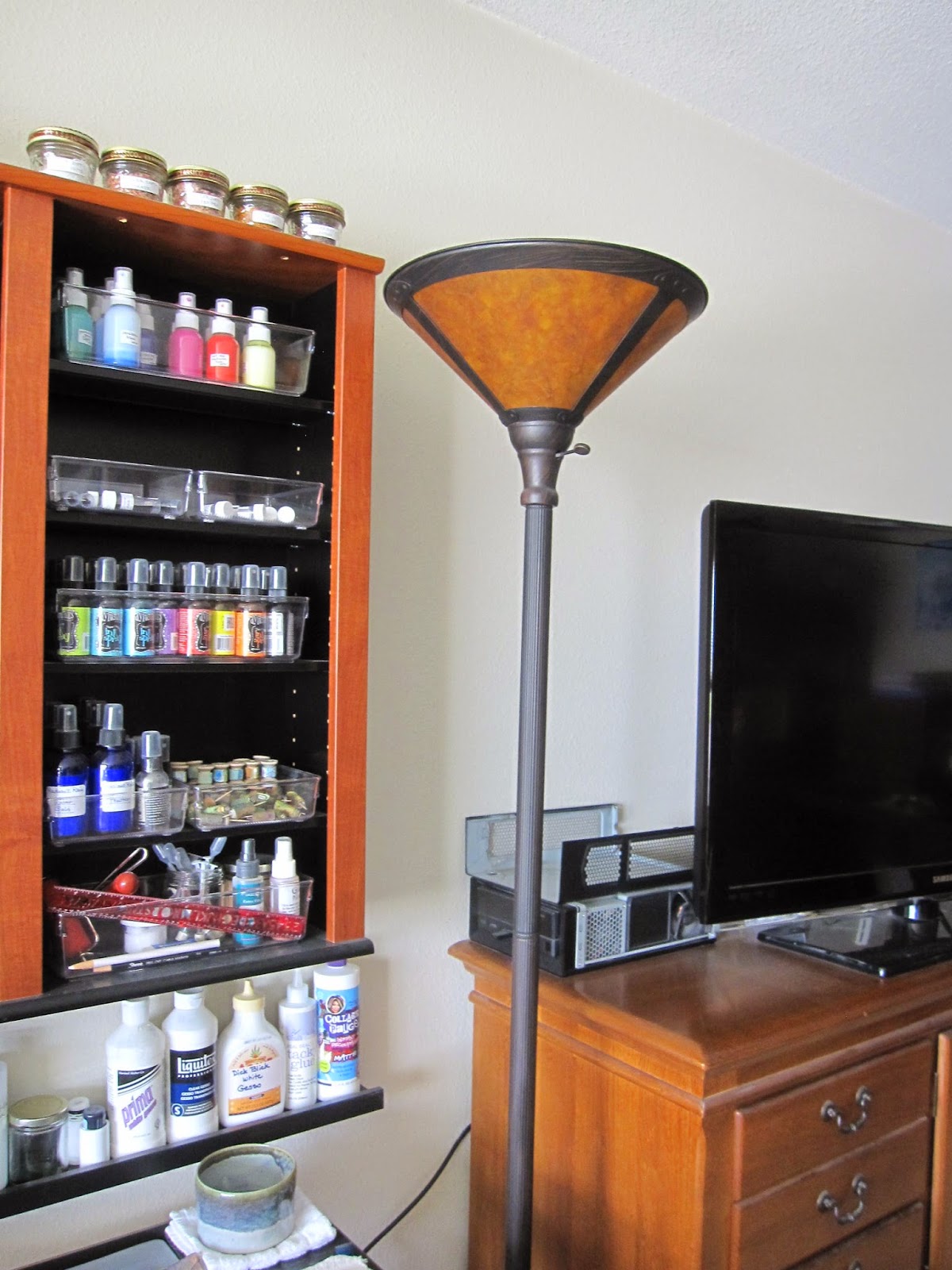 My very nearsighted, bifocaled eyes can't read by it or write or do any kind of art or craft with such indirect lighting.  I'll give it away on freecycle if Caroline can't find anyone who wants it.
****
Oh, and I took the thick brown leather fauxdori covers that I have been struggling to remove the coconut oil from for five months, as you know, and absolutely soaked them in hot sudsy water.  I scrubbed them liberally with liquid soap over every inch with a toothbrush and soaked them for an hour or so.  Rinsed and rubbed them thoroughly with hot water--three times.  Drained them for an hour.  Then left them overnight to dry.  As you see them here they are still damp.  So I put computer paper over, under, and inside and left them another day. 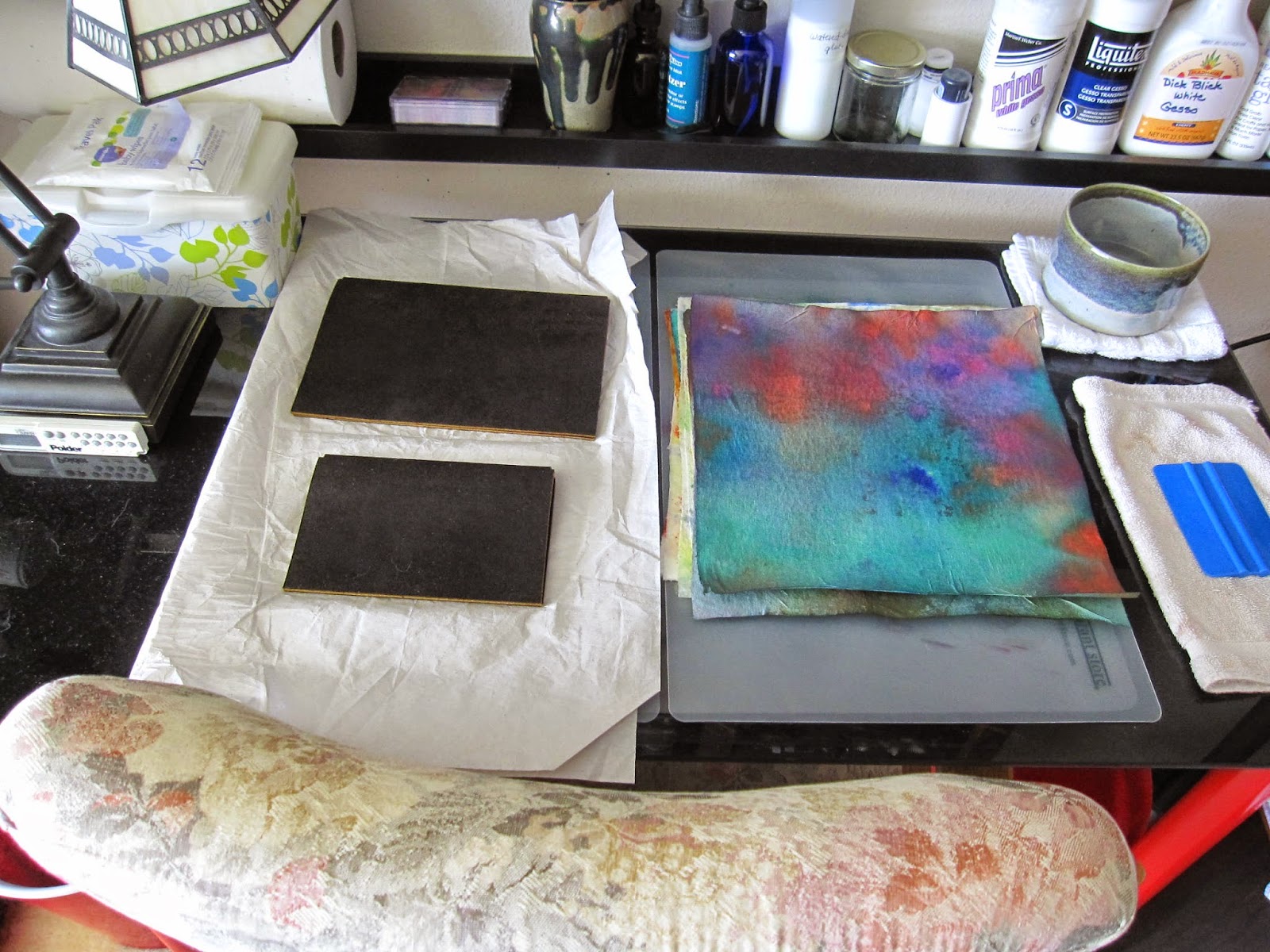 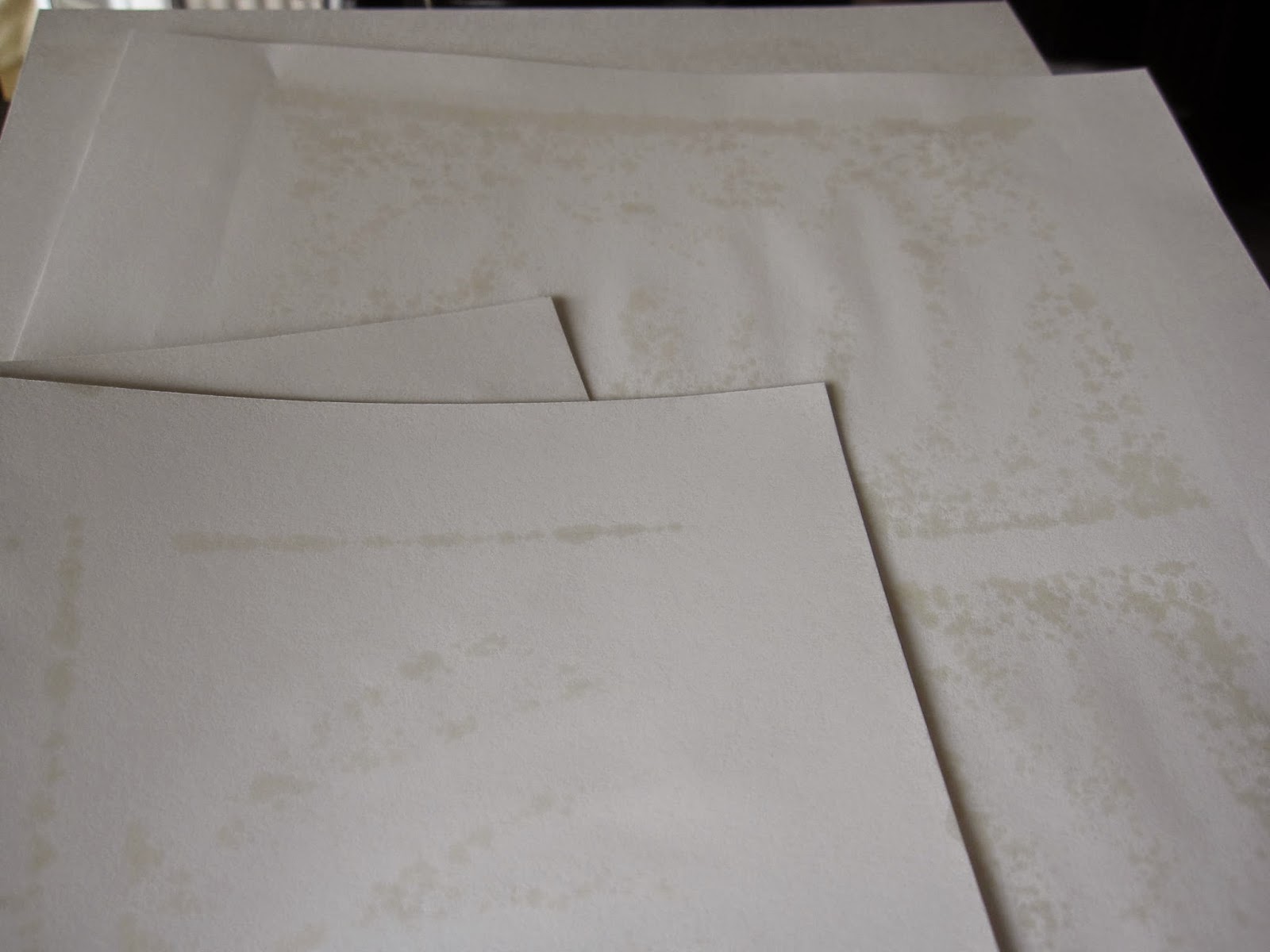 Therefore, I finally gave up and threw them away.  Can't say I didn't try.  I definitely learned never to use coconut oil to soften leather--LOL!
****
Tuesday Leah and Ian arrived a little before Caroline.  Leah wanted to surprise Caroline with a visit as long as she was going to come over and put the floor lamp together for me.  :)
****
Miss Karma had been sleeping under my desk and was completely thrown to see Leah (who hasn't been here for quite a while and Karma was fully expecting Caroline because I was emptying wastebaskets and picked up all her toys & beds like usual before Caroline comes).  She hid under the desk while Caroline cleaned the bedroom (she always does that first so I can carry Karma in there and shut the door while Caroline finishes the rest of the place because Karma hisses at her and hates the vacuum).  As soon as Caroline was done in the bedroom Karma slunk in there all on her own to get away from the alien, frightening sounds Ian was making in the living room--LOL!
****
Caroline cleaned and got to really meet and hold Ian before she left.  :)  I let Karma out of the bedroom.  She was hoping beyond hope that everyone was gone.  But instead Leah and the new creature were still here.  ;)  I held Ian and rocked him in my chair while Leah put the lamp together.  Karma did come over, sit up and try to get a peek once...but he was too scary.
****
I got a few pictures right as they were getting ready to leave. 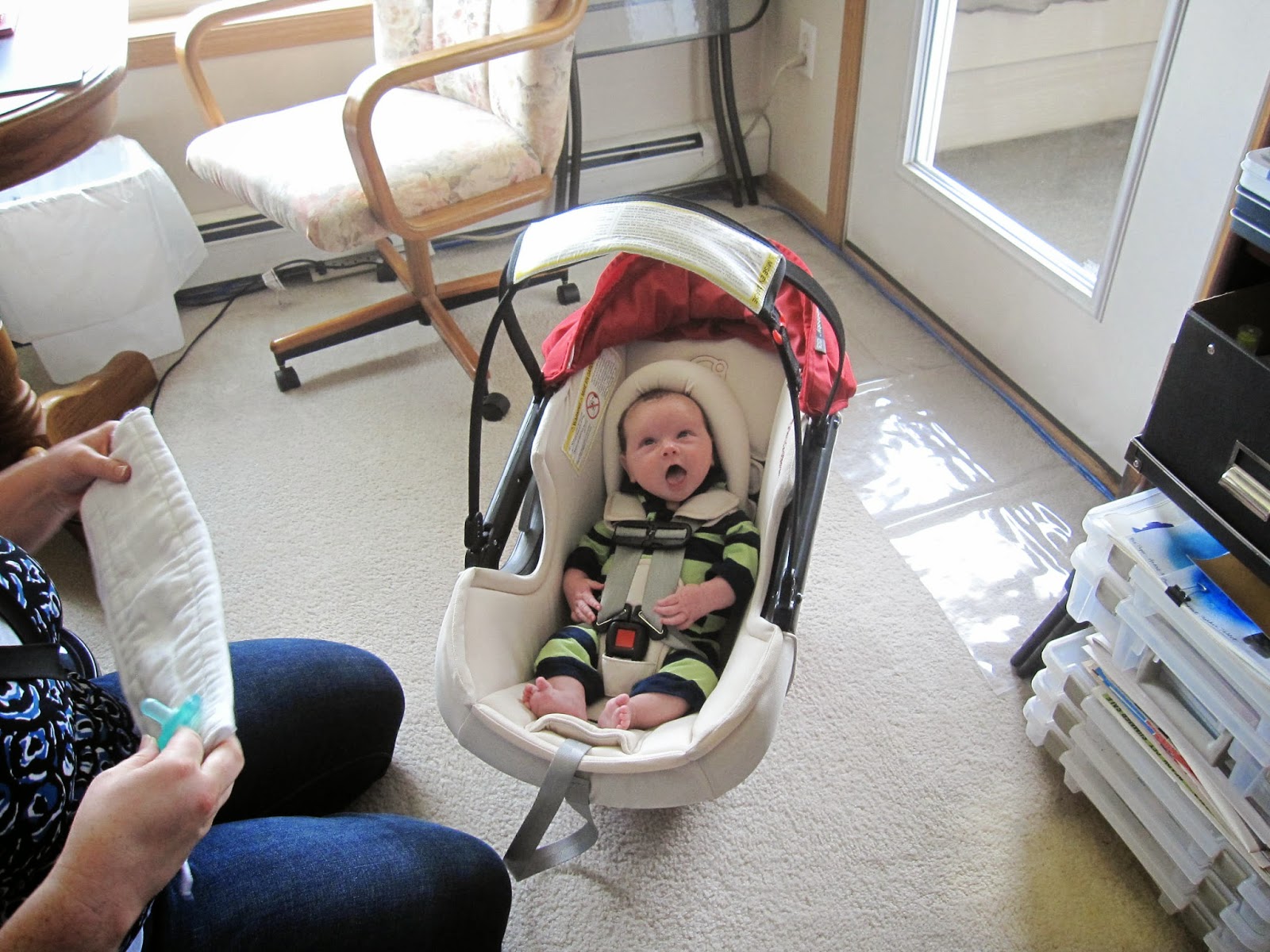 Ian was watching me with the camera again... 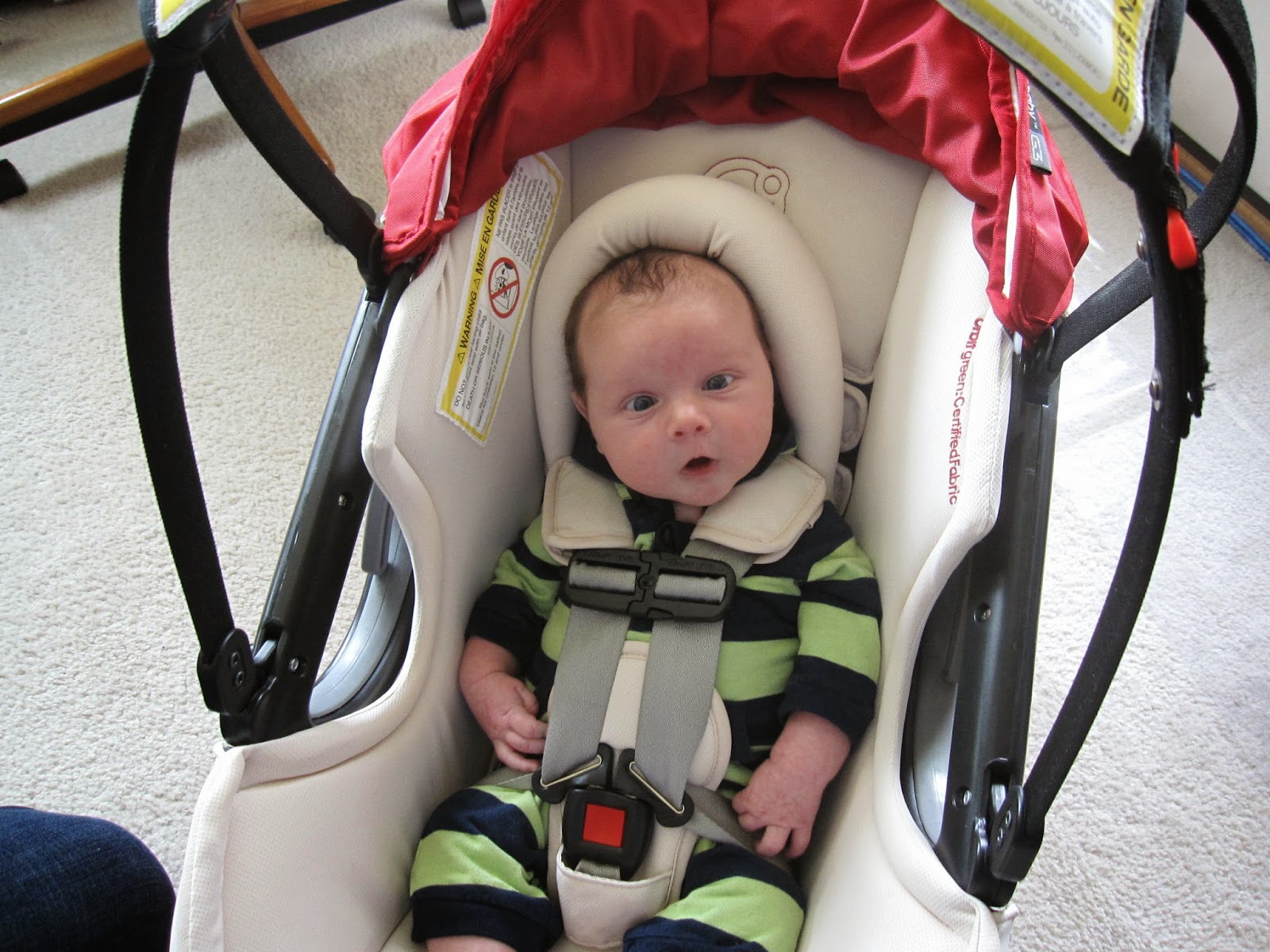 ...and made such faces that Leah and I were laughing. 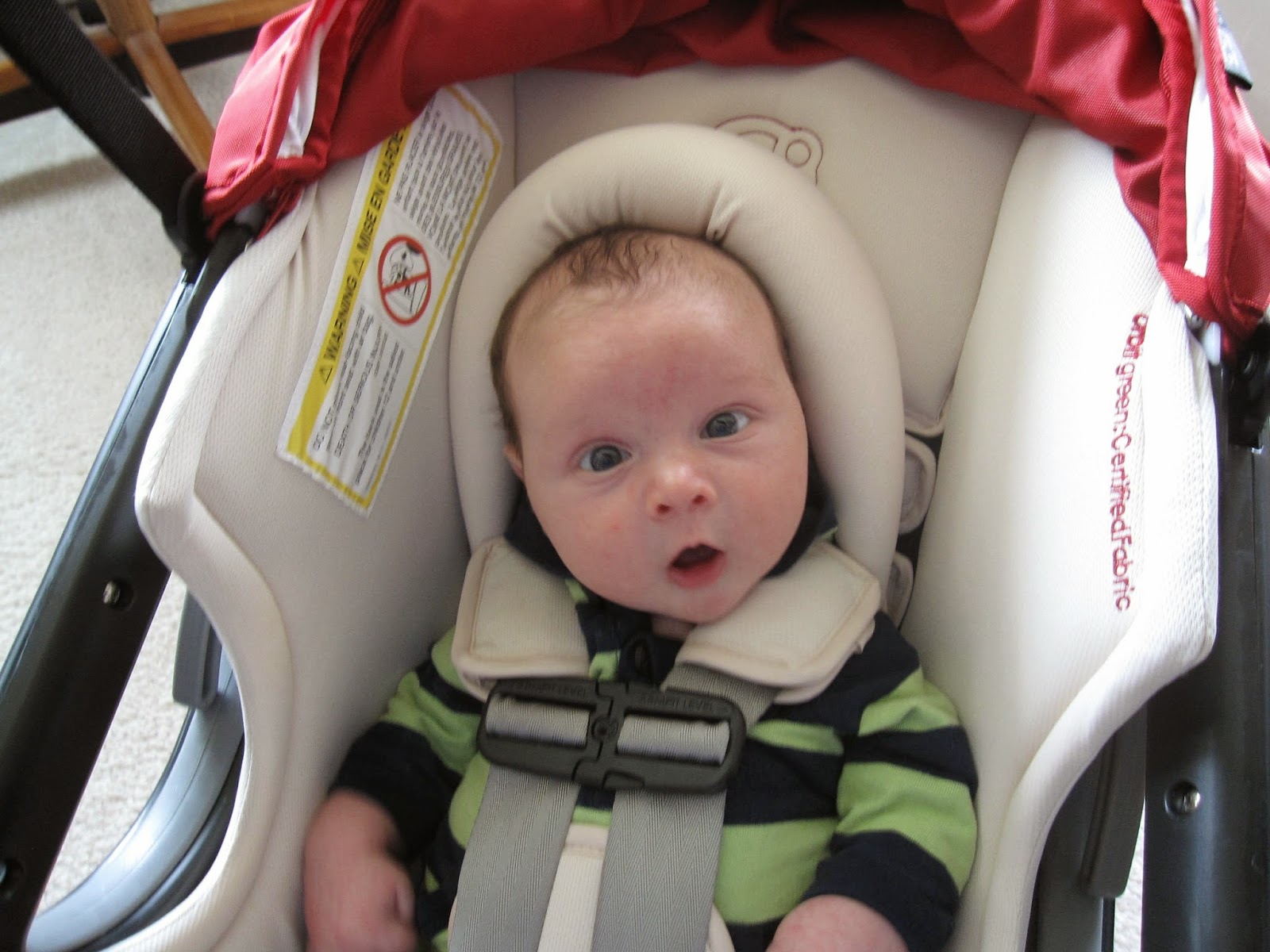 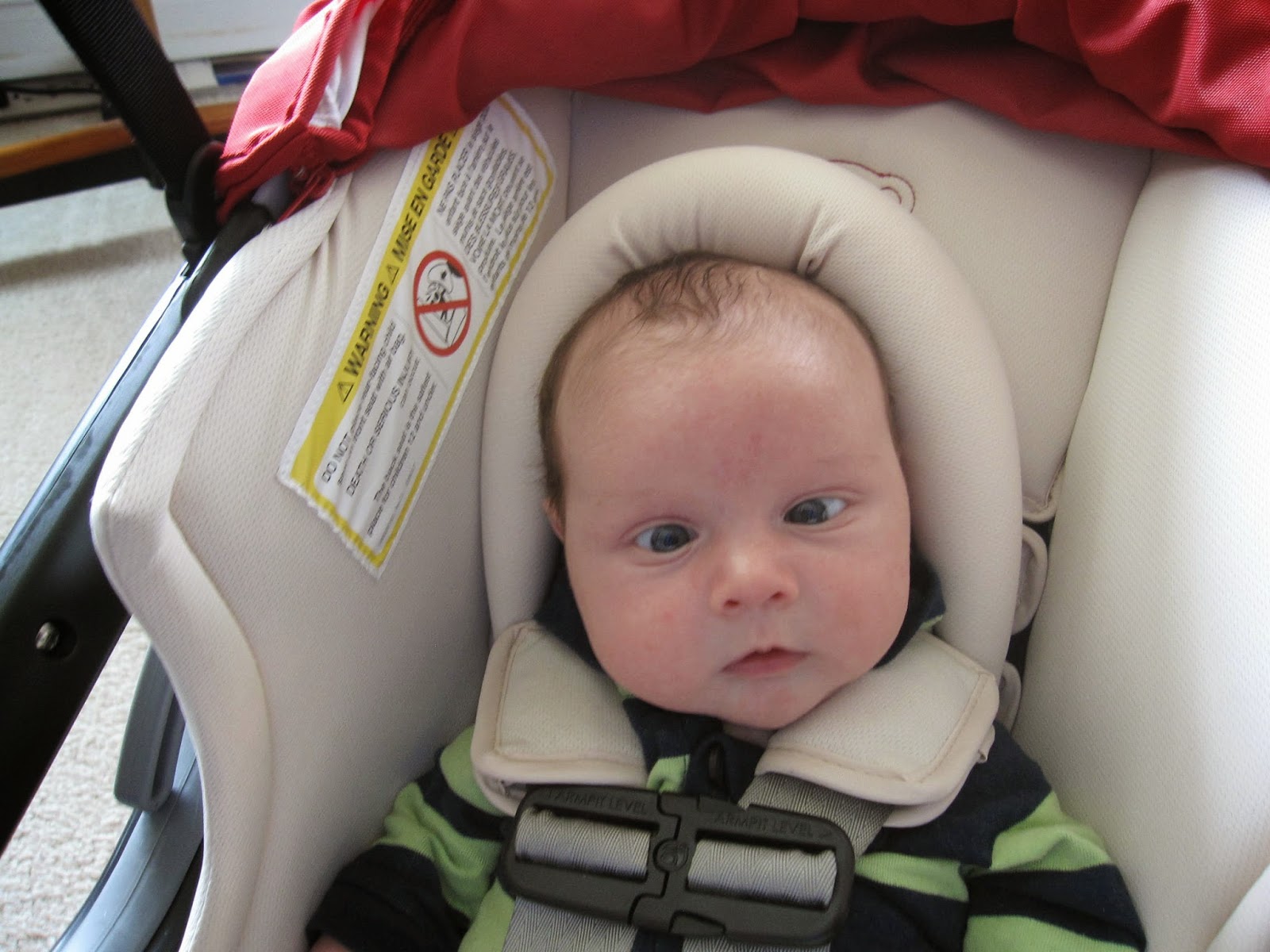 And where was Miss Karma?
Safely under the end table the whole time. 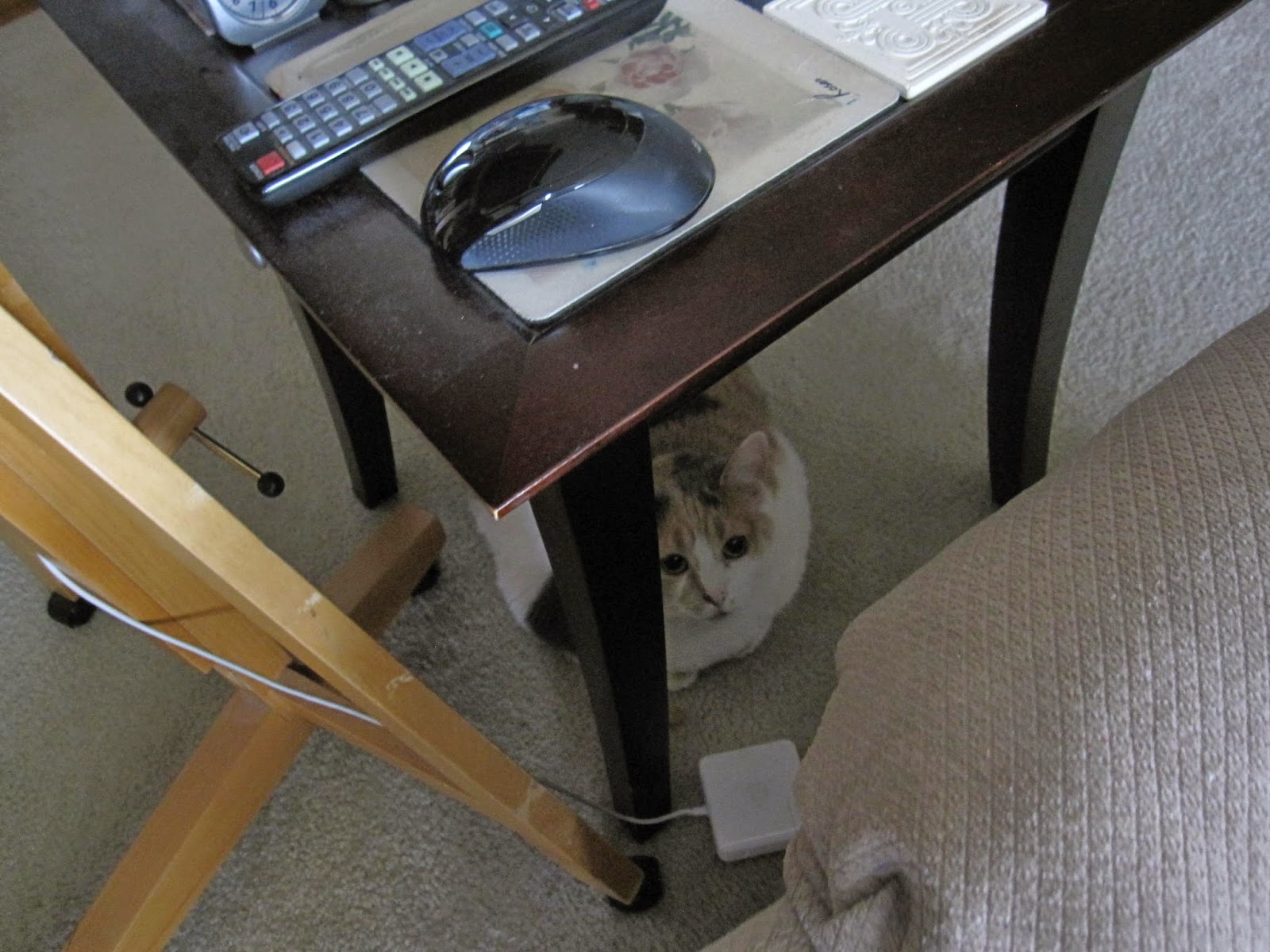 She never hissed at Ian, though.  :)  Was really curious, but too scared to get any closer.  Kind of the same reaction of Sammy and Annie (the McFamily's cats).
****
Love the new lamp!  I set it up so I can have the two top lights on by themselves, the three aimed at the table (whoohoo!), or all five at once. 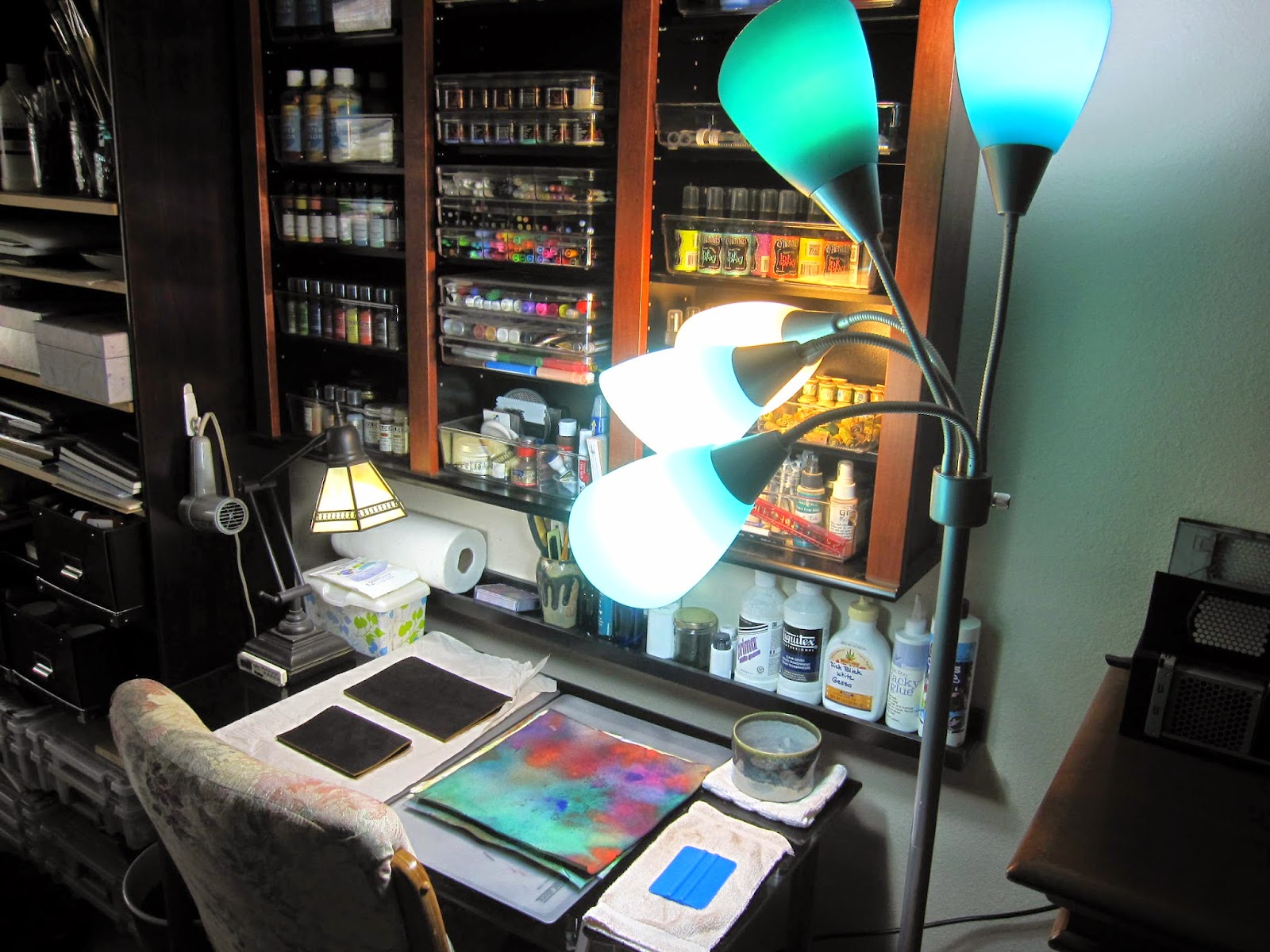 Note: I was going to get into my wanting to move, but I think I should make a whole separate post on that.  It is depressing just for me to even write about (why I've been putting it off for a couple weeks)--and if it's in a separate post then you can just skip it if you want to.  Hopefully I'll get it written later today or tomorrow morning.
****
Anyways, some of the Johnson Clan is arriving tomorrow from the Twin Cities.  My folks aren't coming up this year.  I guess their older car they keep in Minnesota (so they can fly up) broke down and they went back to Florida early.  But sounds like my brother and his wife, my sister, and her son and his new wife are all driving up.  We're meeting over at Dagan and Leah's and I will take pictures.  :):)
****
So--I am going to take a break and start on the say-a-prayer-I-want-to-move post--LOL!
Have a great weekend!!
****
"My family is my strength and my weakness."
Aishwarya Rai Bachchan
Posted by Rita at 2:16 PM

I understand the need to move from a place you love because of things you can't control. That's why we moved from one apartment to another two years ago in the same complex. And by the end of this month we will have a FOURTH set of downstairs neighbors. Gretchen is being evicted because of her cat, which she lied about when she signed the lease. :-(

Funny how cats and dogs seem to understand babies are not to be treated like grown up people.

glad karma survived the space invasion! and i laughed at your lamp with dreams of living in a spicy dorm. :)

That is a great new light! Love those photos of your Ian:)

Moving? Did I miss something big? I can wait for next post...

I love your work-space!

Yes, you most certainly did try your best to get the oil out of the fauxdori covers. Too bad they ended up being tossed but at least a valuable lesson was learned.

How lovely that Leah and Ian came to visit. Babies can pull some hilarious faces at times and still manage to remain cute while doing so.

I love your new lamp too!

I'll be glad when you are able to move to a better place than where you are at.

Oh, you can be such a tease ;) I look forward to reading your next post.

LOL I have one of those lamps in storage. Wisely haven't given it away because I now can see using it for better lighting while crafting in my future.

Thanks, again, for the pics of the baby!

It's a shame your parents can't visit. *snort* Ian looks so surprised in those photos, almost as if he's shocked by what he sees. To the first of many visits by Ian.

Moving stinks! You have such a nice organized space so wherever you go, you will do fine. Karma, on the other hand.......
Cutest baby! Love how they cross their eyes!

Such a cute picture of Ian with his eyes crossed! I'm glad Karma didn't hiss at him. But if she's scared of him now, wait until he's crawling and walking!

You know, I wish I could read Karma's mind once - and find out what she thought was in that box!!

Ian is adorable and growing like a weed. :) I can hardly wait to meet my new grandson. Should be in the next couple of weeks. :)

Love the new lamp. Looks like it will do the job you wanted it to do. I have a hard time reading with dim lighting so I can understand what you mean.

Prayers for the new move. (sorry...reading from newer to older because I'm way behind on blogs)

That face is so precious. :) And the lamp is a steal at that price. Good for you. And Karma.. she knows that all self-respecting cats must hide when there's a new baby in the house. They're weird little beings. ;)

Gramma Rita...Marga Rita... Easily confused. :P I LOVE the pics of Ian! What a cutie!