Good Morning!
There were so many raindrops on the windows... 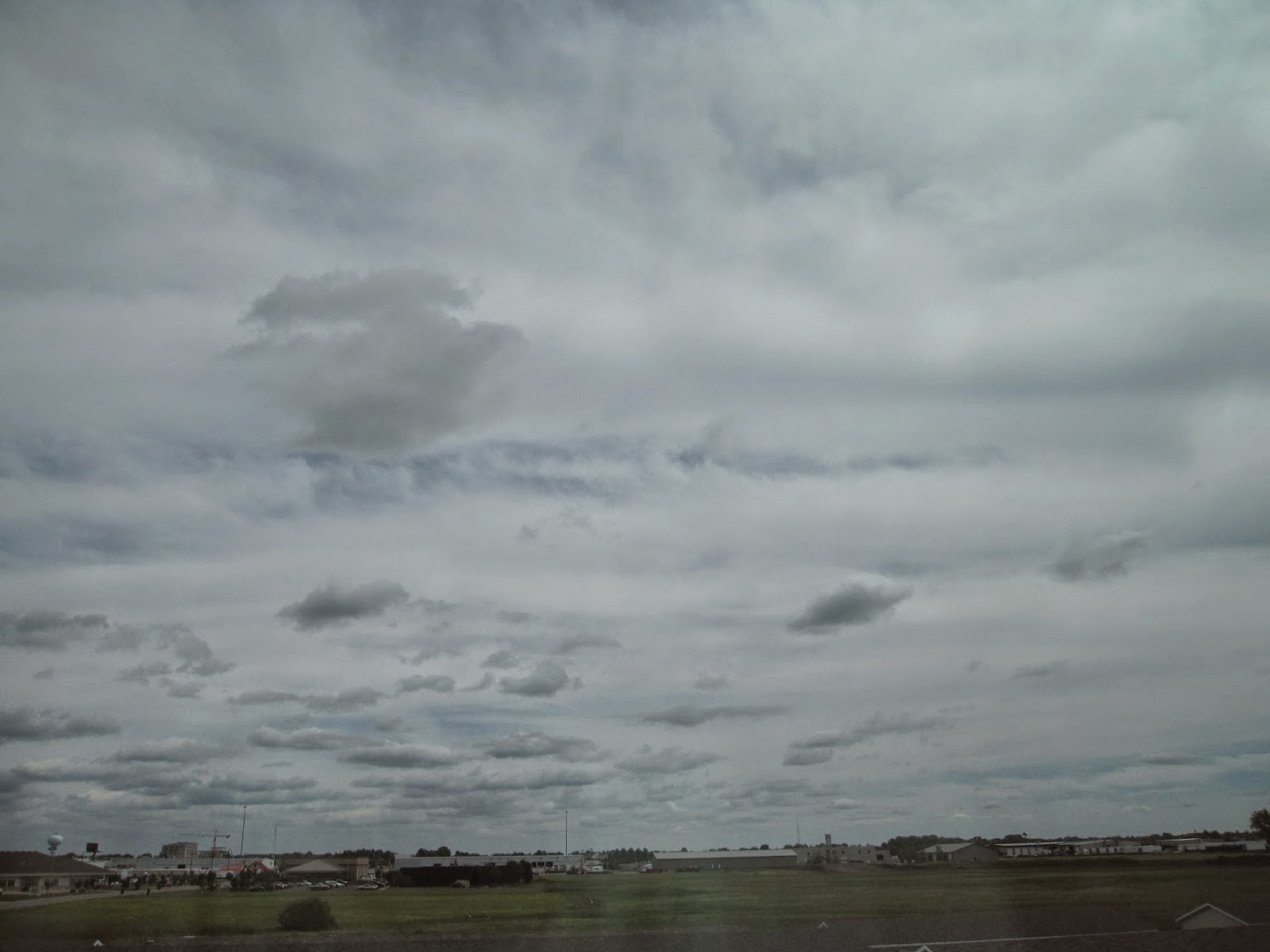 ...that I went out and took pics from the porch. 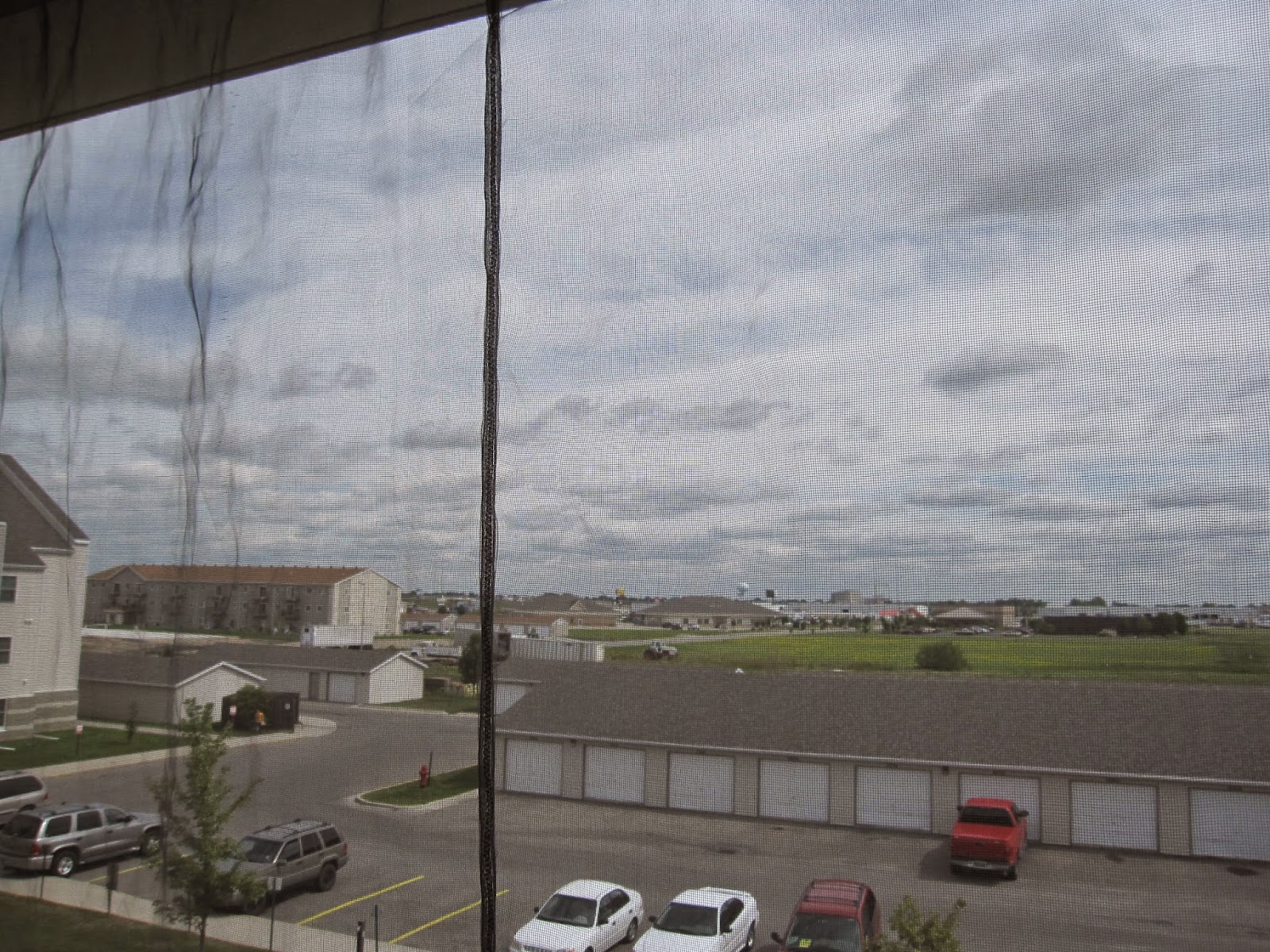 When it's been nice out, Karma and I have spent a lot of time by the open windows. 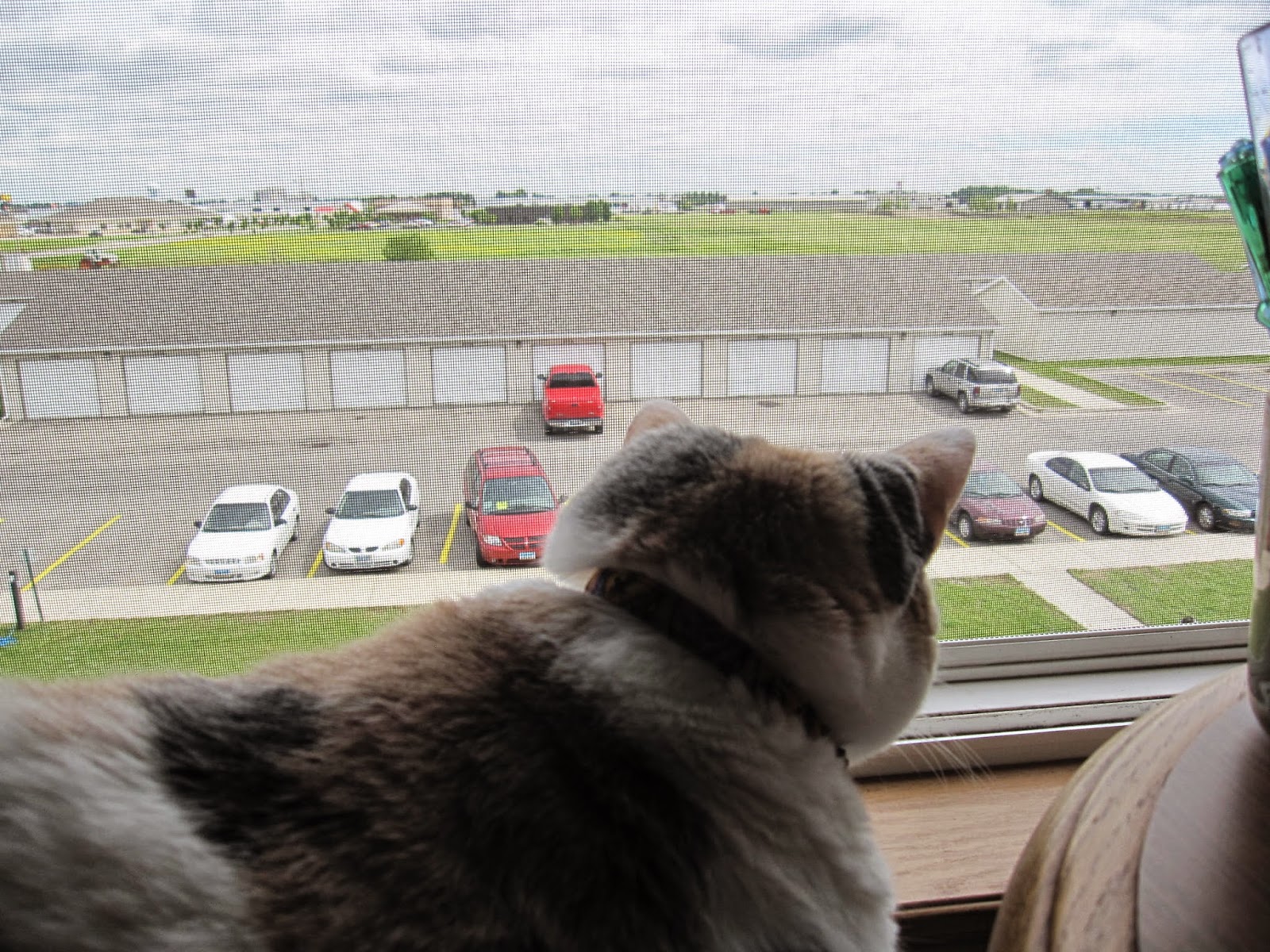 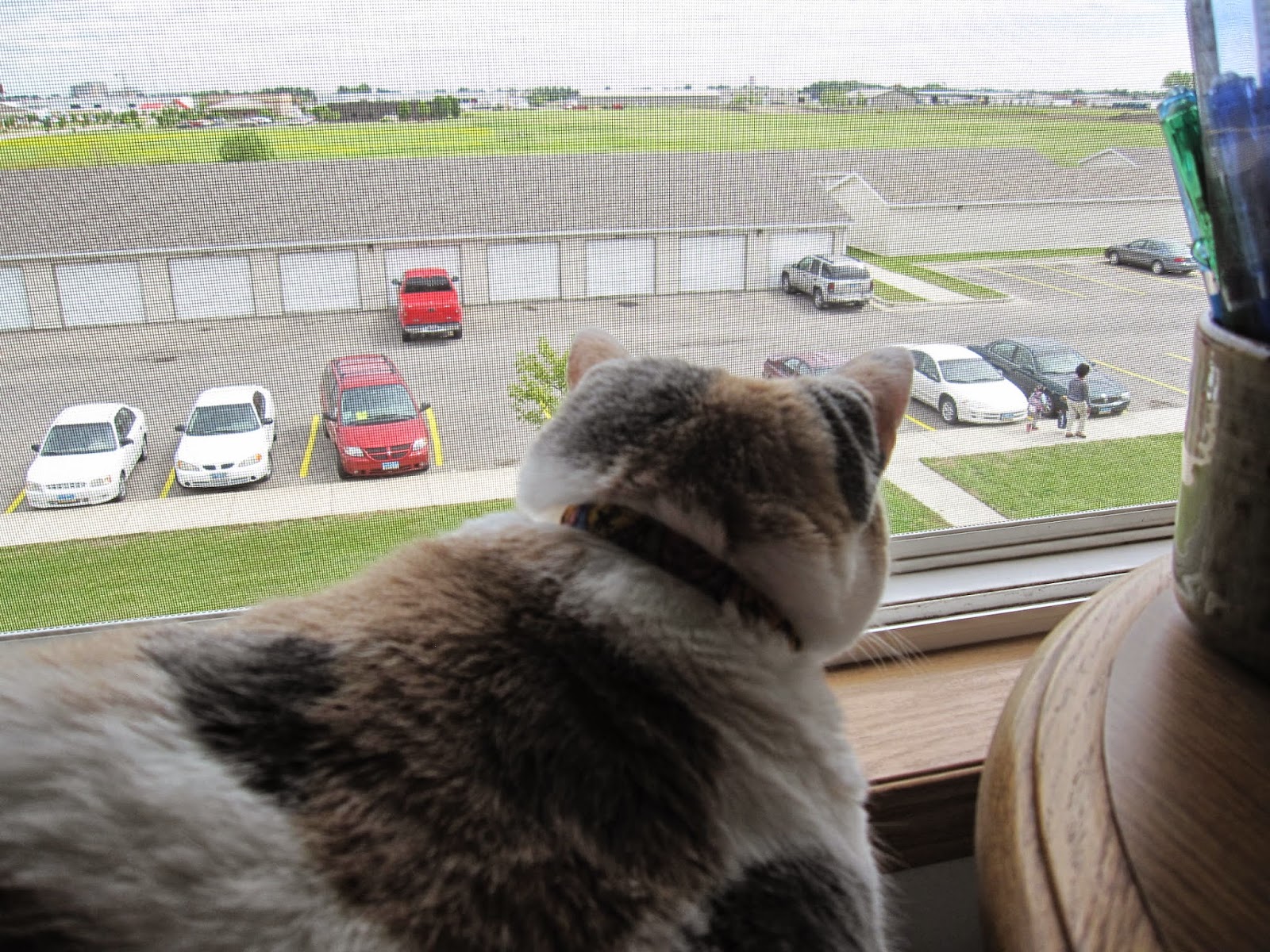 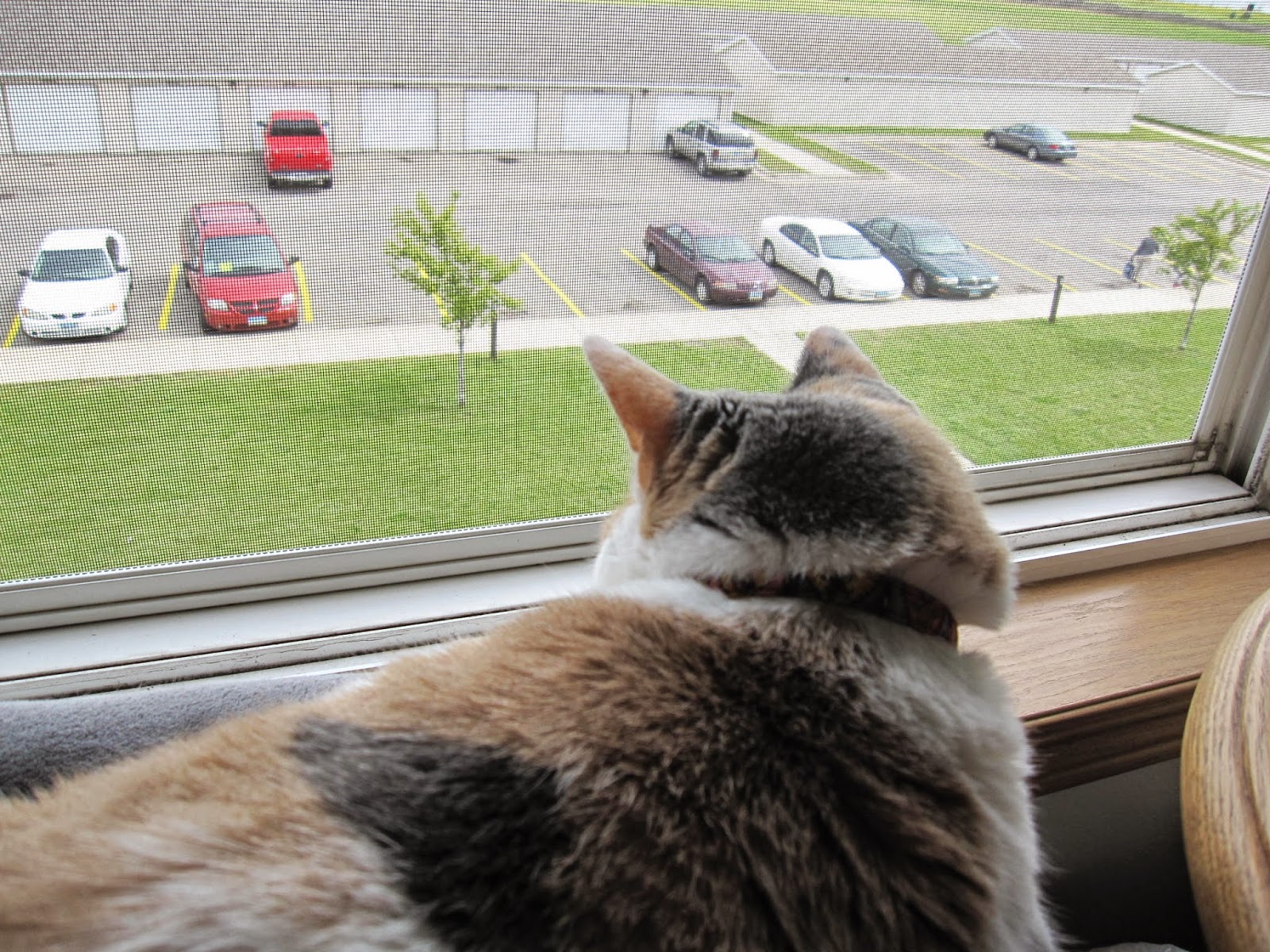 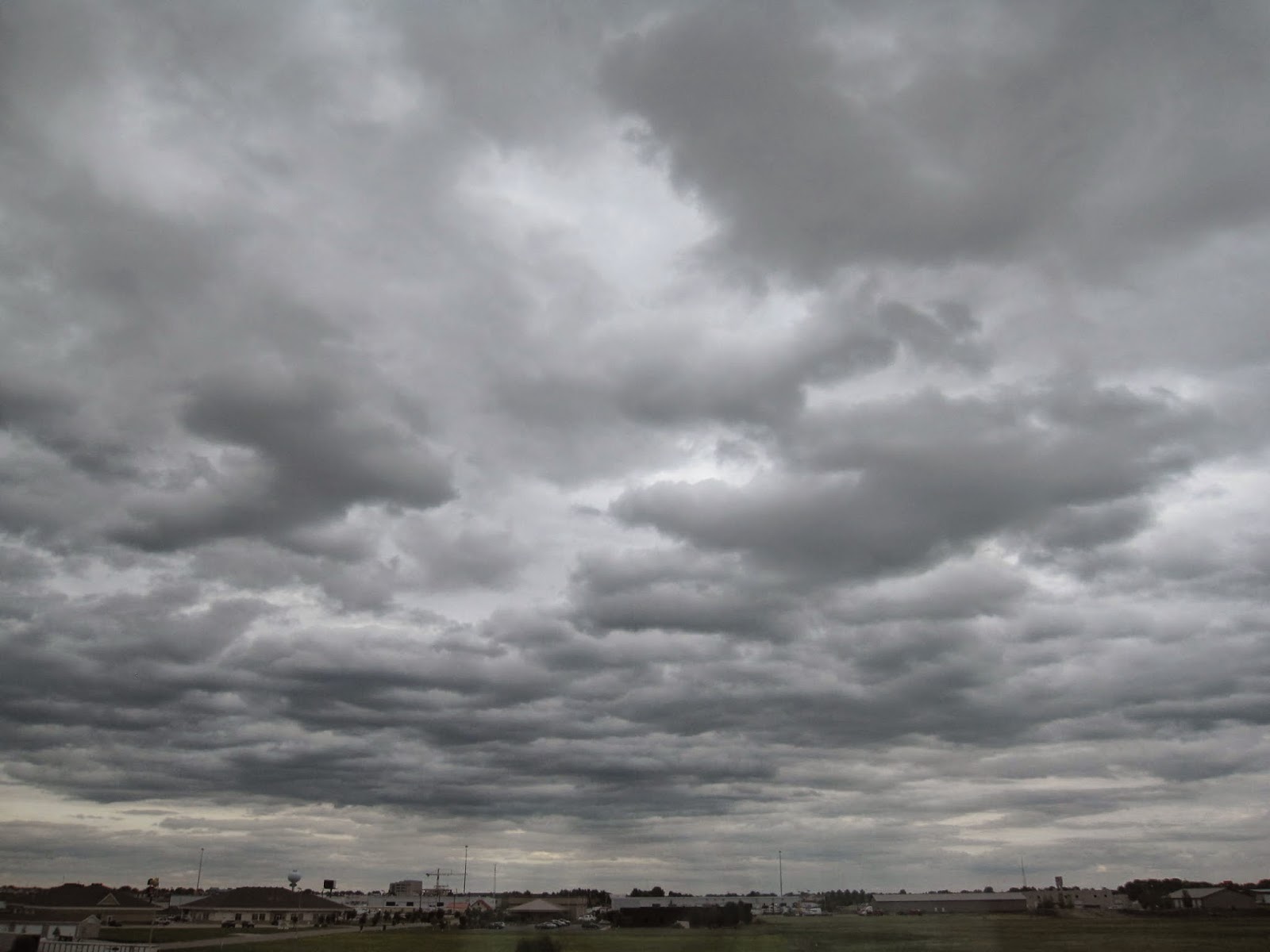 I have been emptying my desk and paring down files.  Leah dropped off more brown duck cloth (didn't get enough) and some "ultra-firm stabilizer" for the diaper tote.  All the fabric has been washed and I drug out and dusted off the ironing board and iron--LOL!  Ready to iron today and start marking off all the pieces to cut.  I actually made up blueberry crumble bars, too. 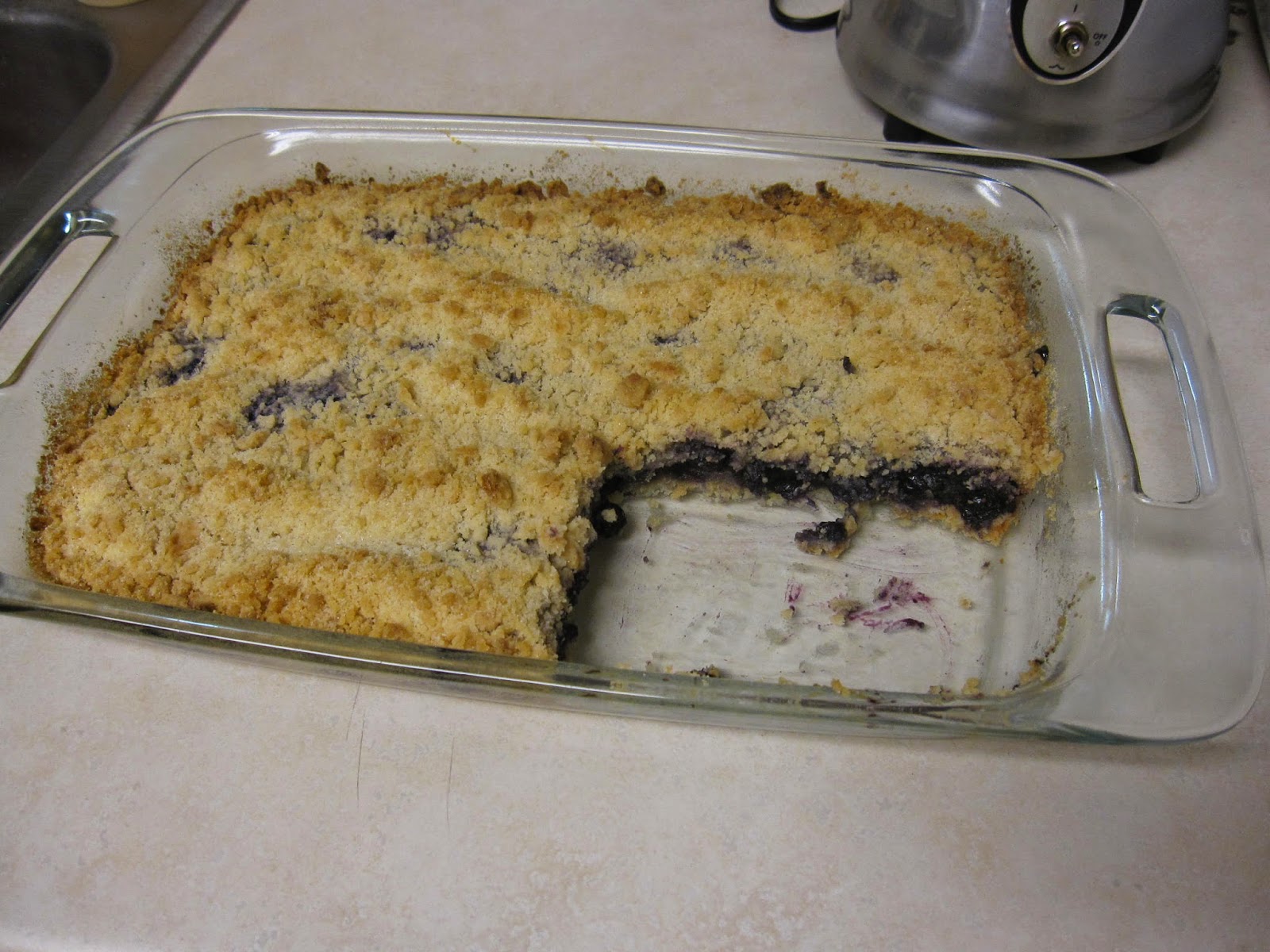 I am up, clean, combed, and dressed early this morning because some time during the day (8am-6pm) the new desk is supposed to arrive!  I made room for the big box to wait against the wall in the entryway until the old desk is taken apart and given away.  :) 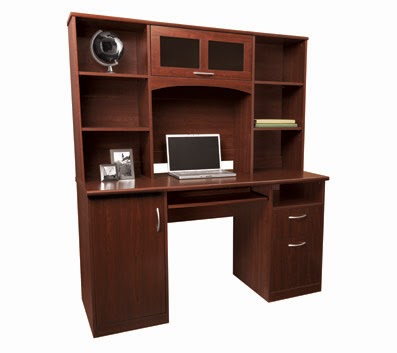 Not only was it $70 off on sale but I happened to get an email with a $20 off code if you spent over $125 online and the code worked!  I saved $90.00!!!  Whoohoo!  I took that as a sign that the universe is opening doors.  ;)
****
The most exciting news, though, is that I called and left a message with my new federal housing worker Monday asking her if I am on the waiting list and if she could find out where I am on the list.  Well, Tuesday I got a call from the lady who is actually working on the waiting list for North Sky and she was just the sweetest lady!  We had a nice long chat and she was soooo nice!  She was just starting to enter names and said there must be 75-100 applicants already and only 24 apartments total are available in this first building that's opening in Oct/Nov and 30 more opening next fall.  The third building doesn't even have funding yet.  (In other words, slim chances for me.)
****
But we chatted...truly chatted.  She knows I am housebound with a companion cat (no problem-just need a form filled out) and want to move because this complex was on the local news for being filthy and run down.  That I don't plan to ever move again so this is IT for me.  She knows I want an apartment with den (because I truly am here 95% of the time and if I had an art and craft room I could actually have a living room and my place would look like a real home), but only am allotted a certain maximum amount.  She told me--yes, the more expensive ones are on the third floor with the vaulted ceilings. She even voluntarily looked up the price for a one-bedroom with den on second floor (yup, I had already told her about wanting second floor) and I am golden price-wise for the one-bedroom with den!  I even asked her if she knew which directions the buildings would be facing and she said she thought they were all east-west--so east would be perfect (that's what I face now!!).  I explained that to get my one-bedroom with den facing east on second floor I would gladly wait a year or two for the next buildings--because this is IT for me.
****
Before we parted she told me that she had written my name and number on a post-it note and stuck it on her computer!!  And that she would call me back in a couple of weeks when she knew more!!  :):)  I was soooooo happy when I got off the phone!!  At least I have connected with somebody that matters.  I am a person to her and not just a piece of paper.  She knows how deeply, deeply grateful I would be...
****
Hope is a marvelous thing!!
****
All your prayers and good wishes and positive thinking and picturing Karma and I in our new apartment with den on second floor facing east (LOL!)...I can feel it is opening doors!  My new worker at federal housing is a young woman who is in a hurry and doesn't want to take any extra time for anything--not that she isn't good at her job, but you maybe know what I mean.  I knew I wasn't going to have Ashley to do any extra nudging, shall we say.  But if Ashley wasn't who she was...well, she wouldn't have bumped me up to the right person.  So you never know who might be a blessing in your life.  ;)
****
All those years ago when Dagan and I got in twice into new developments when everybody said odds were stacked against us...I had people praying and wishing for us...and both times I quite randomly connected with somebody up the line who really counted...with some influence.  Back then I also had already been getting ready to move and gotten floor plans...so that when I talked to them I was specific about which apartment I dearly wanted.  I got the floor plan and the direction I wanted to face both times and in one I even got to pick out the carpeting!  After I talked with this kind woman on Tuesday I had intense deja vu...like I was being helped along to meet the right people and doors were being opened again, you know?  I was dancing around the apartment and freaking out Karma!
****
Now, I realize this doesn't mean anything.  That until I am told that I am actually able to move and which one-bedroom and what direction and which floor...IF I can get in at all...this is all hope and prayer and dreams.  But I am still dancing!!  I am still dancing!!  :):)
****
Just thought you'd like updates.  ;)
****
A couple days ago we had some blue skies with scattered clouds. 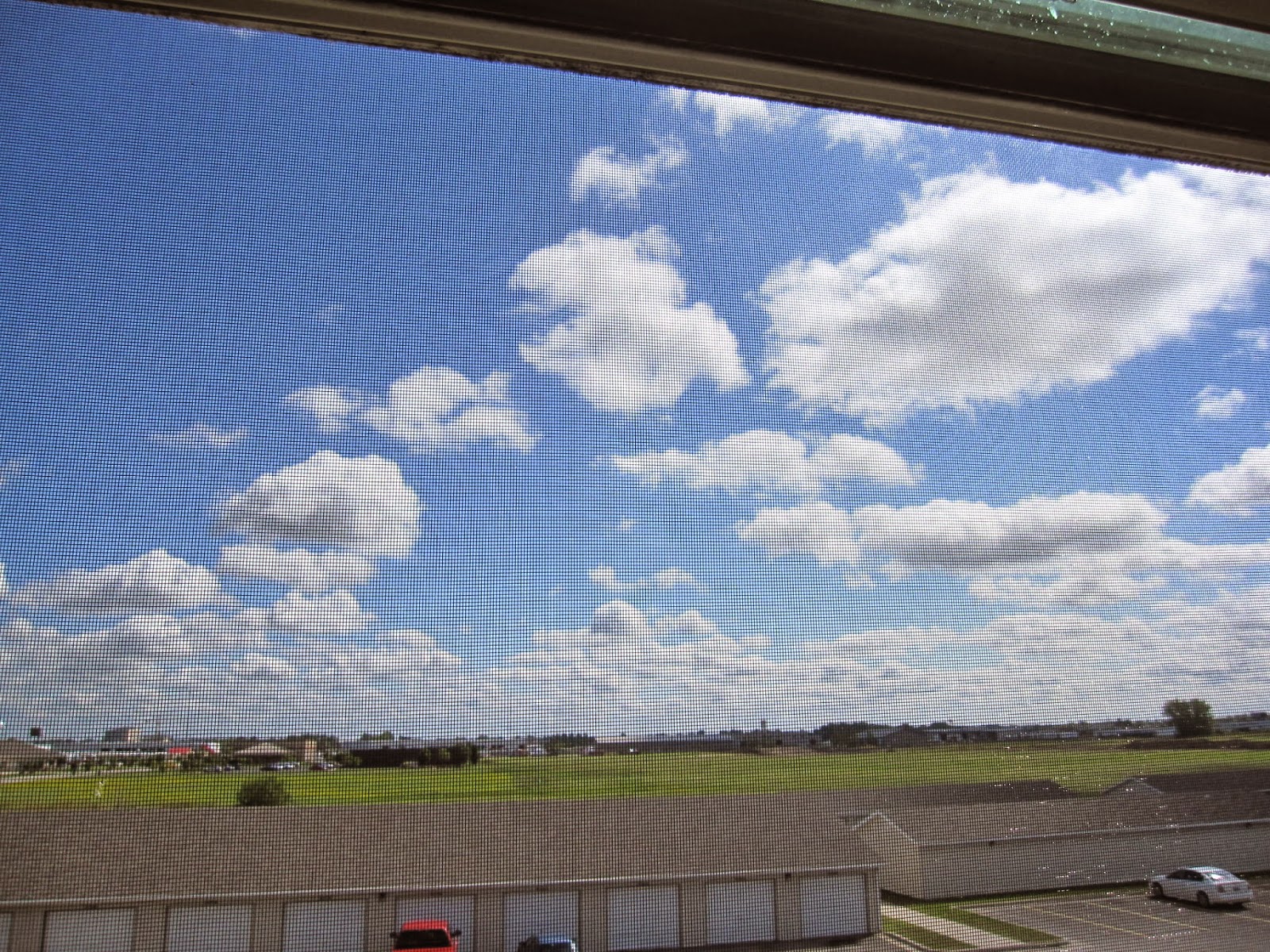 I took some pics from the porch because I so seldom do that... 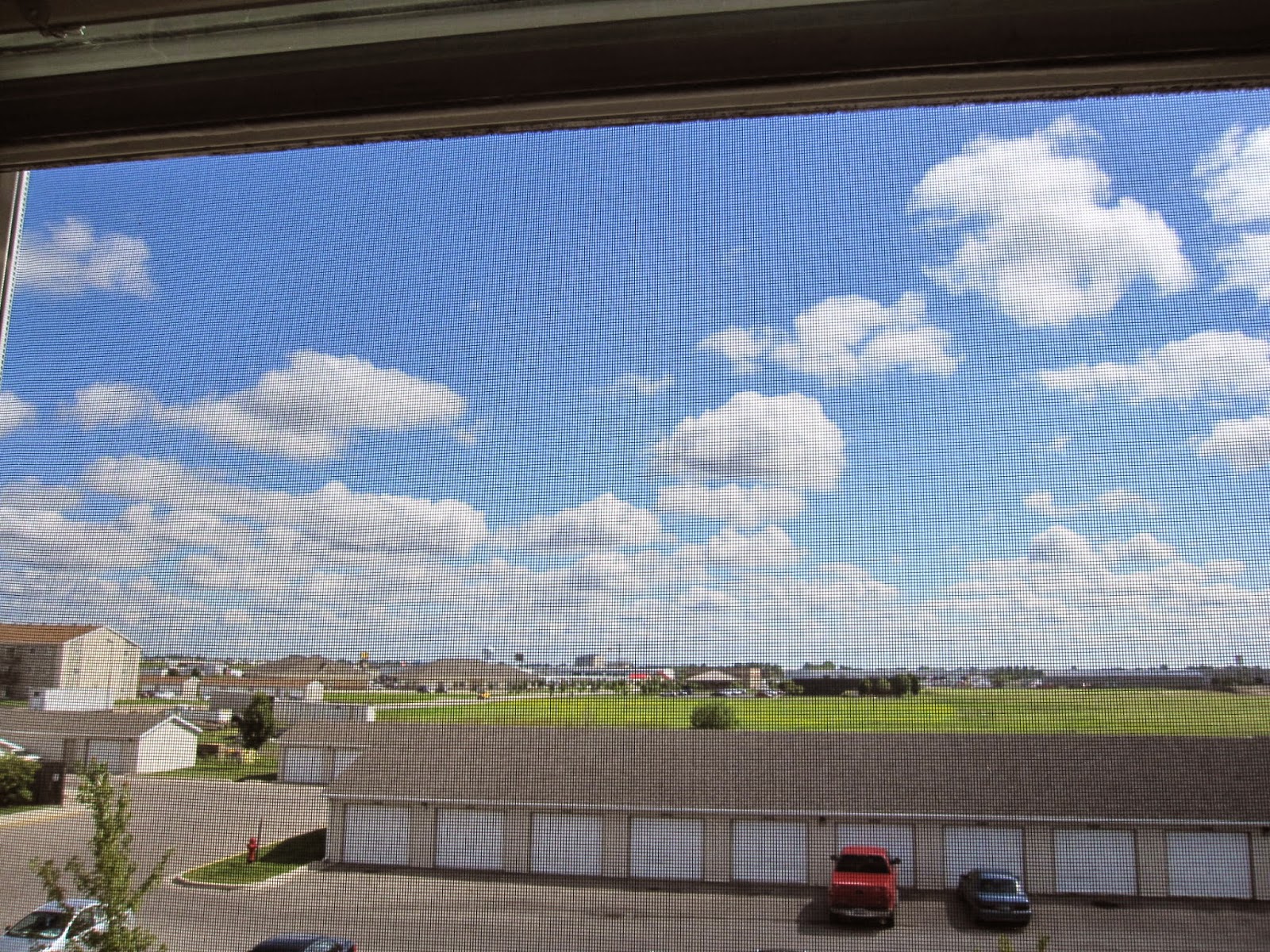 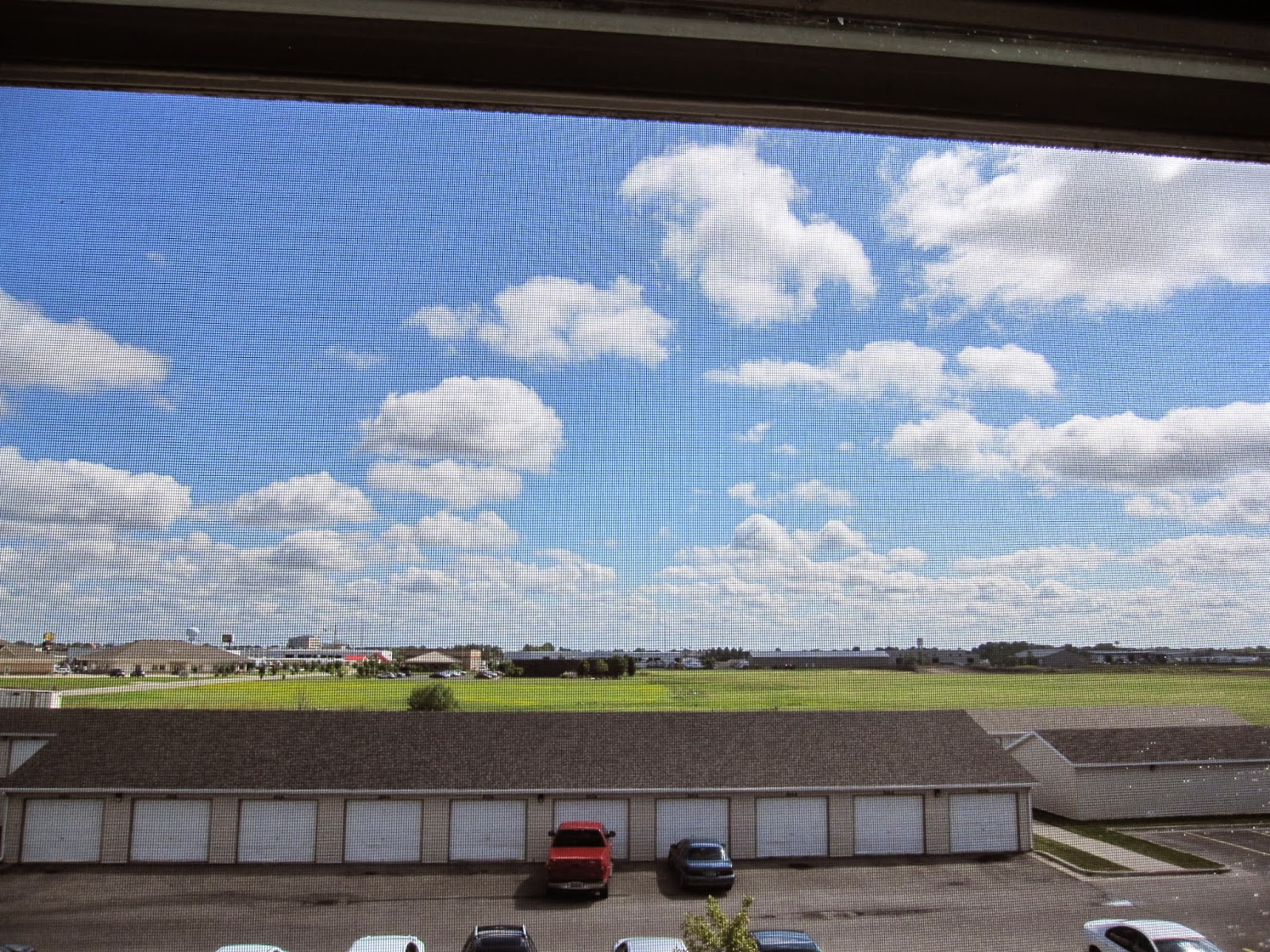 I've been telling Miss Karma that she will be living someplace else one day...but it goes in one ear and out the other. 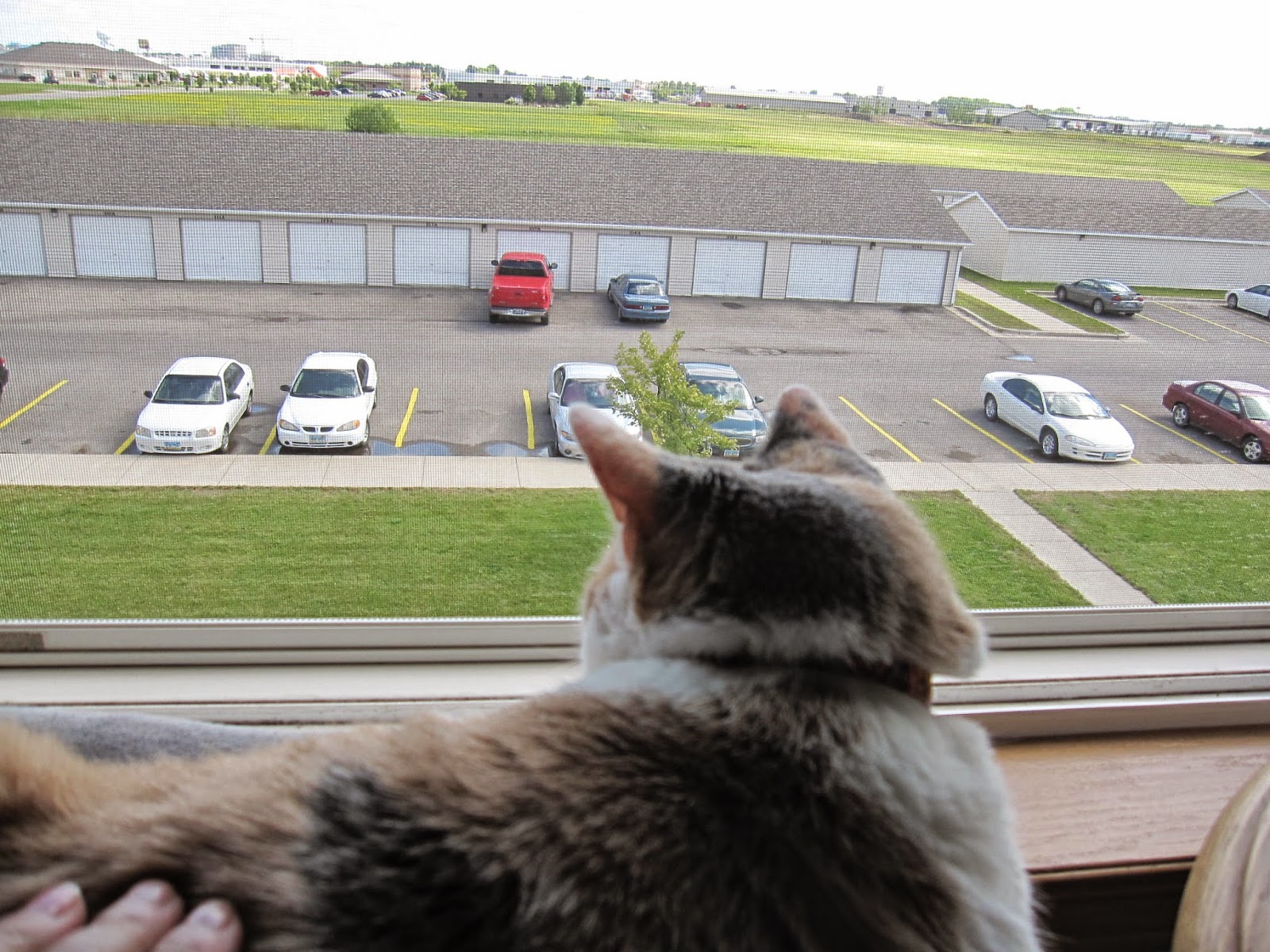 I don't think she can imagine another channel on her Cat TV--LOL! 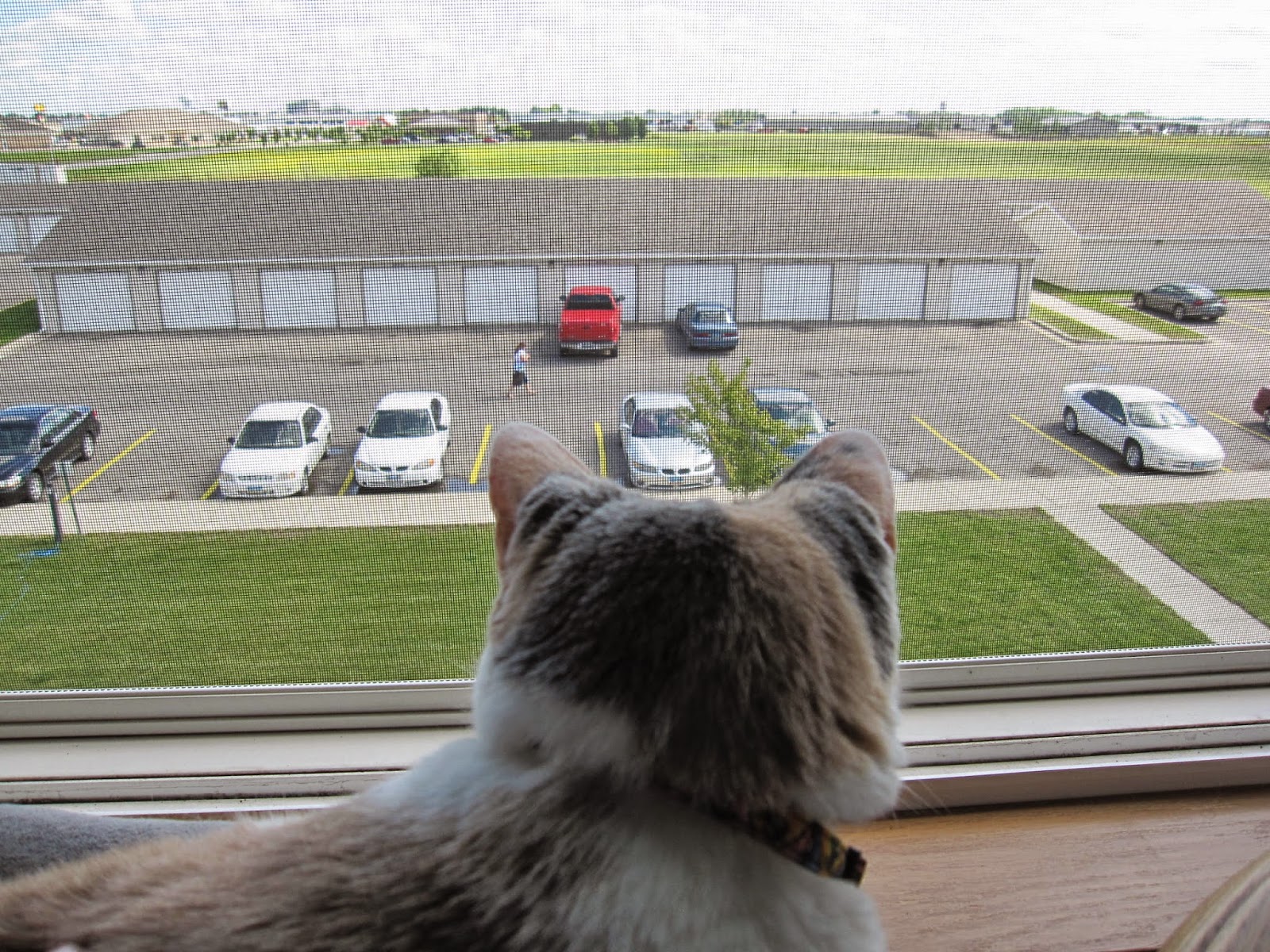 Or workers not discussing clients in the hallway and doors not chiming when they open and close across the hall. 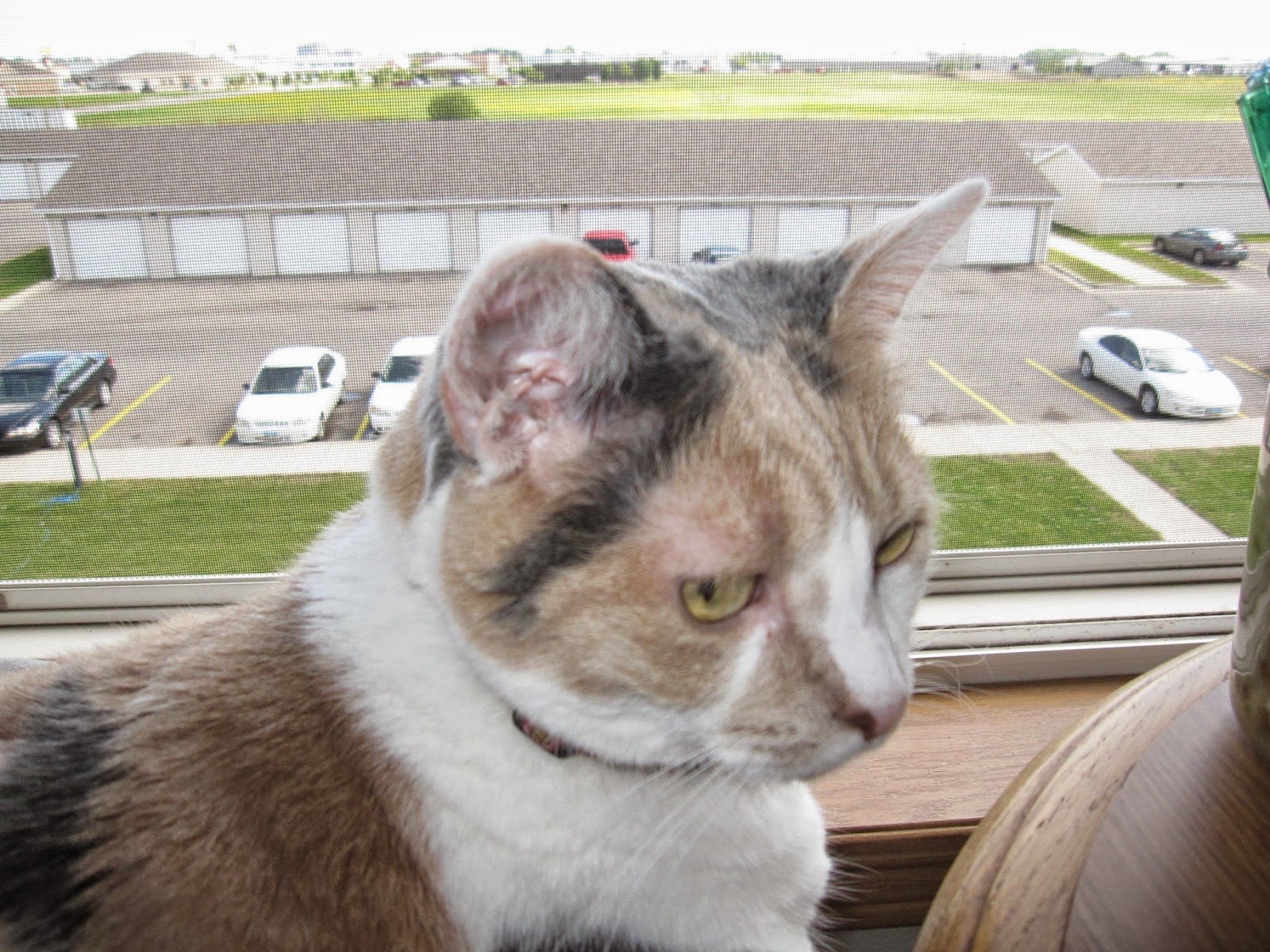 The thing I keep thinking about is being able to go down to the community room or the library!  Furniture!  People I could chat with!  I think they will even have an activity director.  How totally different that would be?!
****
Anyways, sorry...I can't help but talk about it.  I think about it a lot...every day.  I am so grateful to everyone who has sent any positive energy, thought, or prayer our way.  It sure feels like it is working!  :)
****
Yesterday we had a gray blanketed sky and some rain. 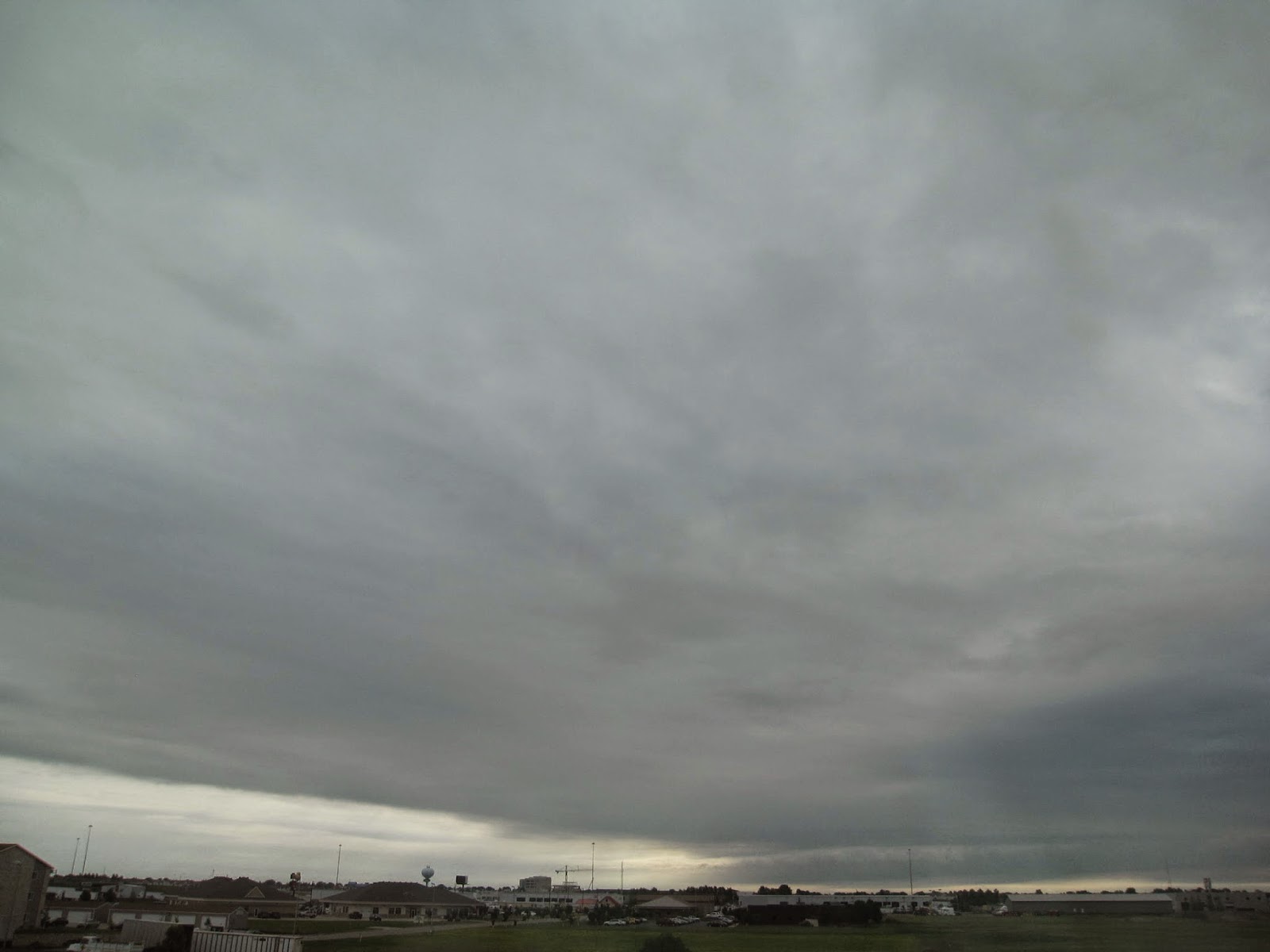 This morning we had fog under a similar sky and expect more drizzle.  It's 70 degrees right now with 83% humidity.  Supposed to get up near 80.  I think I am going to have to close up if I am going to be able to get anything done on the diaper tote today.  The dampness has me lurching about like Quasimodo!
****
Karma stiffly hobbles, also, when she wakes up from her myriad of naps.  We are quite the pair! 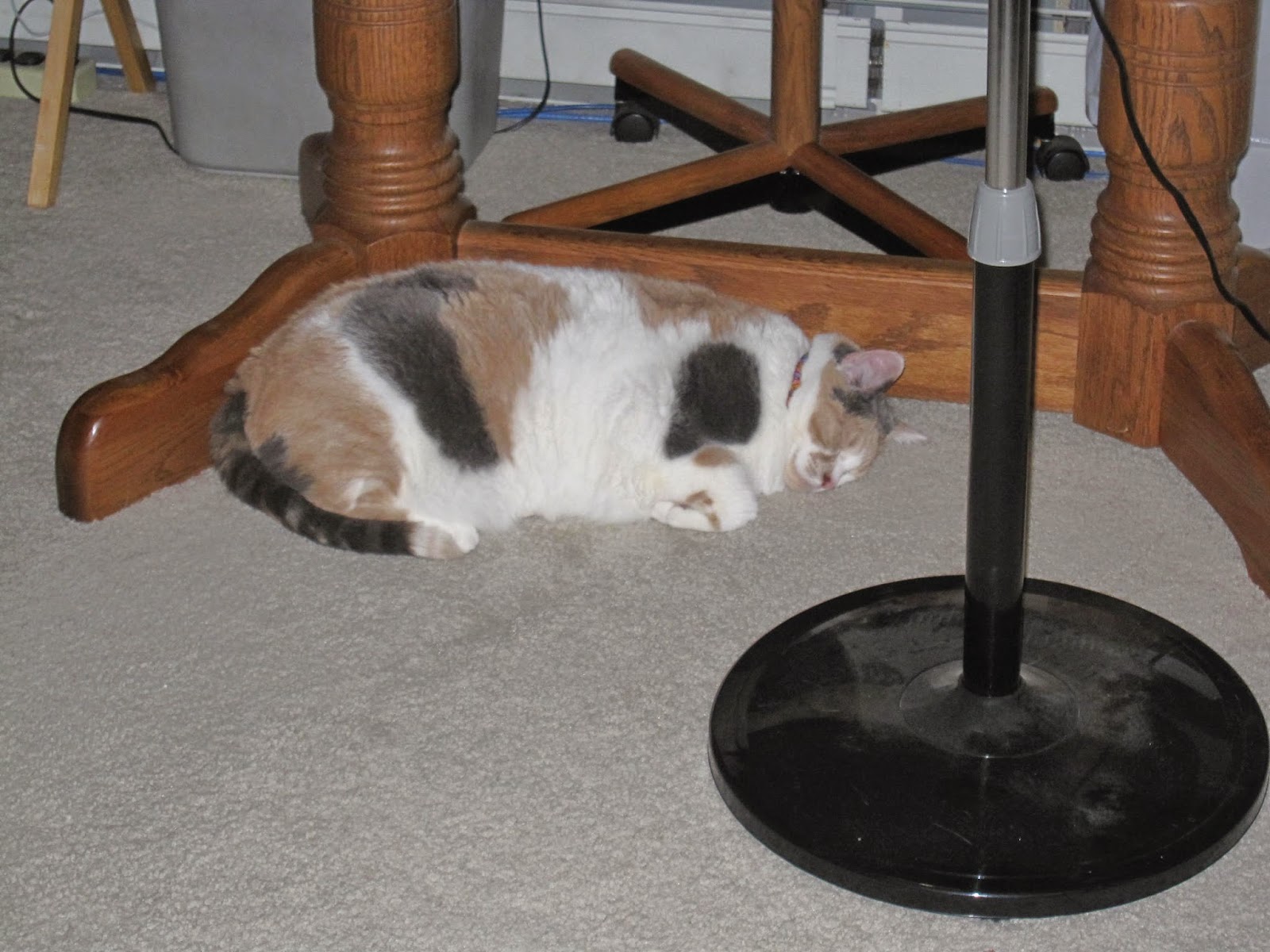 Oh, I had to laugh!  Remember how I complained to Netflix about them dropping selections on streaming and only giving a week's notice--especially when it is a series?  Well, for the very first time I got a month's advance notice for them dropping a series.  Trouble is they dropped ten of the series I had listed in my streaming queue--ROFL!  Well, I may get to watch one or two of the shorter ones.  I guess they're trying, eh?
****
Well, that's it from Fargo today.  I am off to spend another day puttering away and day dreaming.  ;)
Keep smiling!!
****
“We can complain because rose bushes have thorns, or rejoice because thorn bushes have roses.”
Abraham Lincoln
Posted by Rita at 10:25 AM