I was up to greet the dawn this morning. 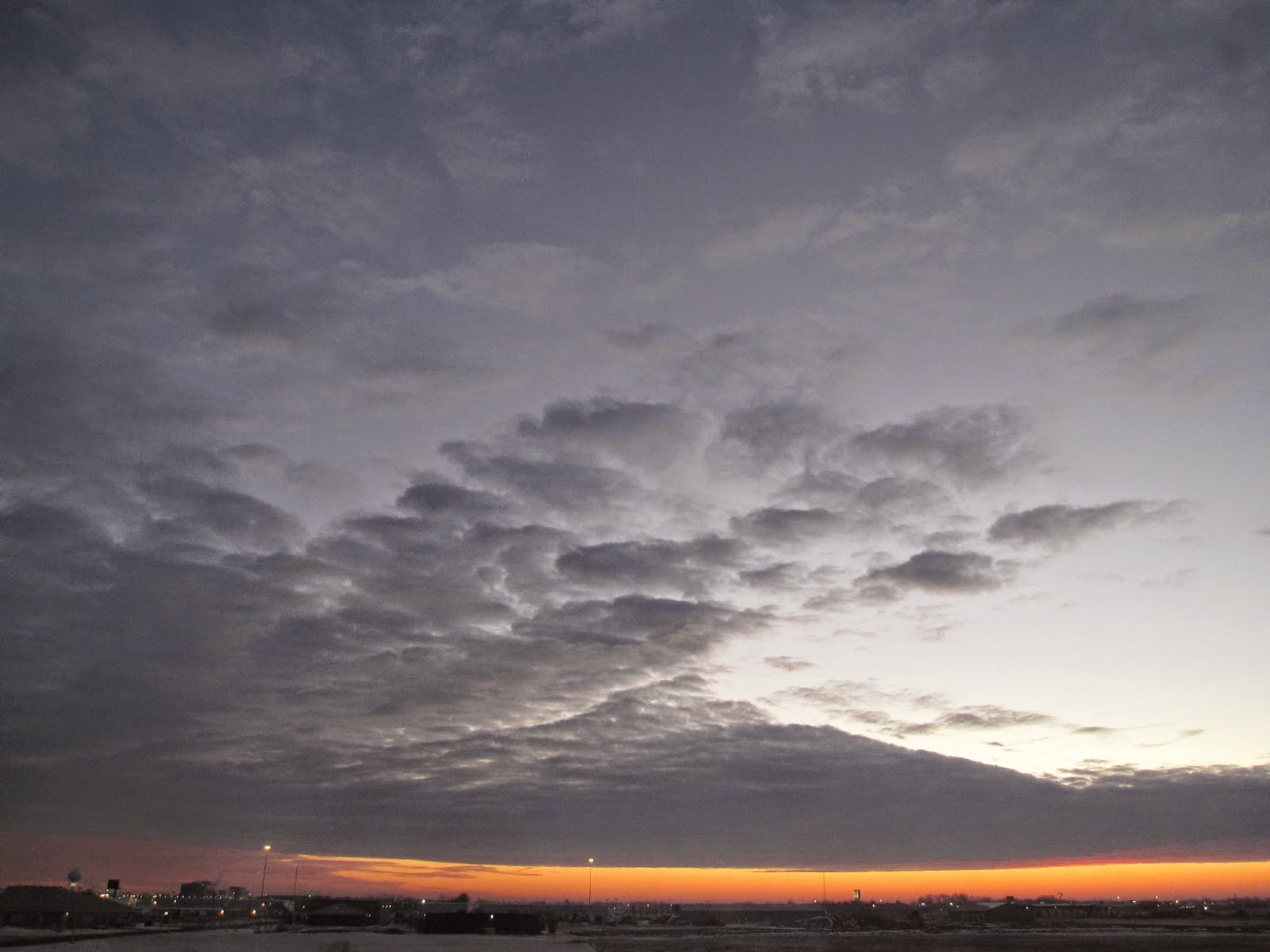 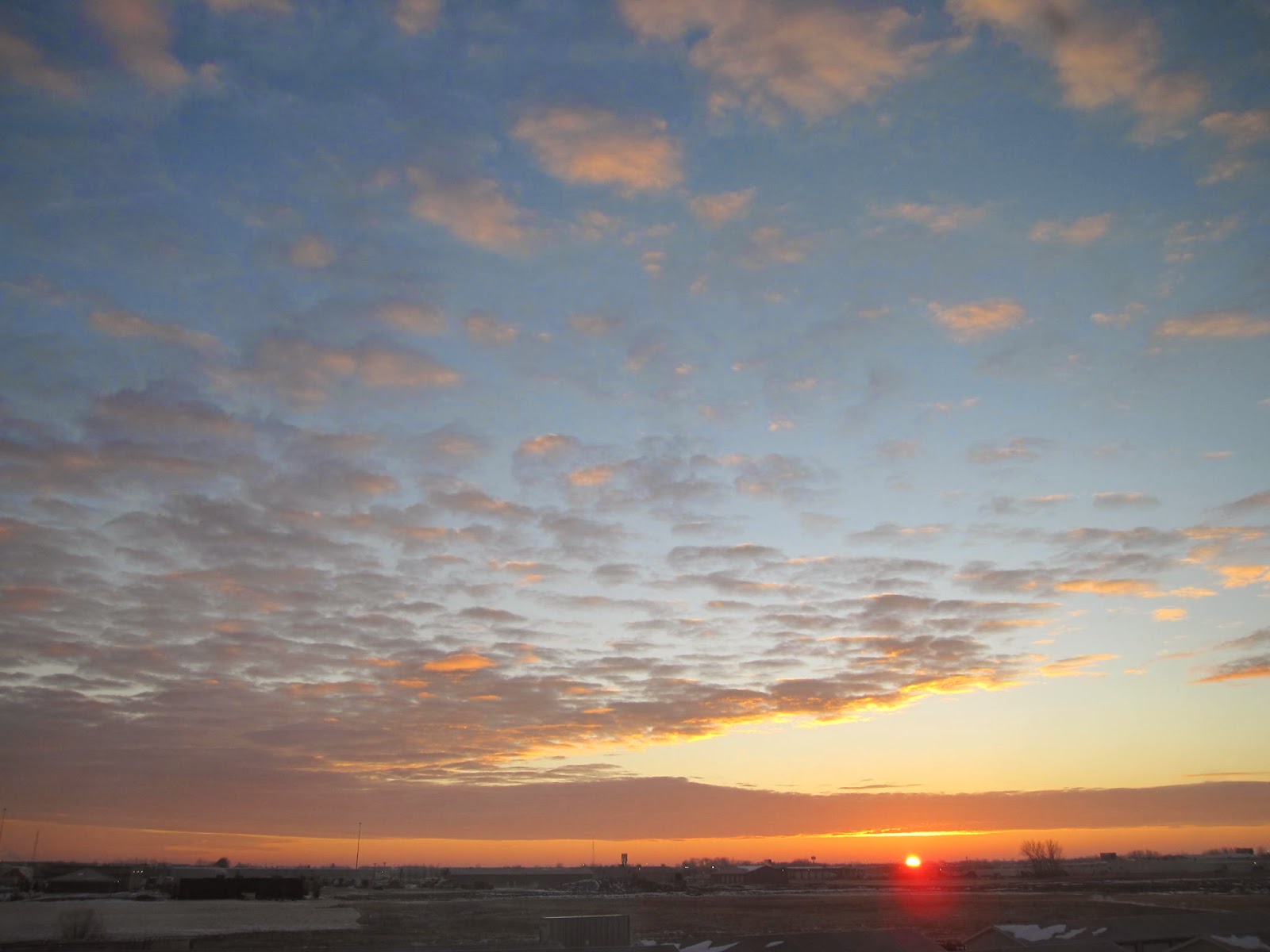 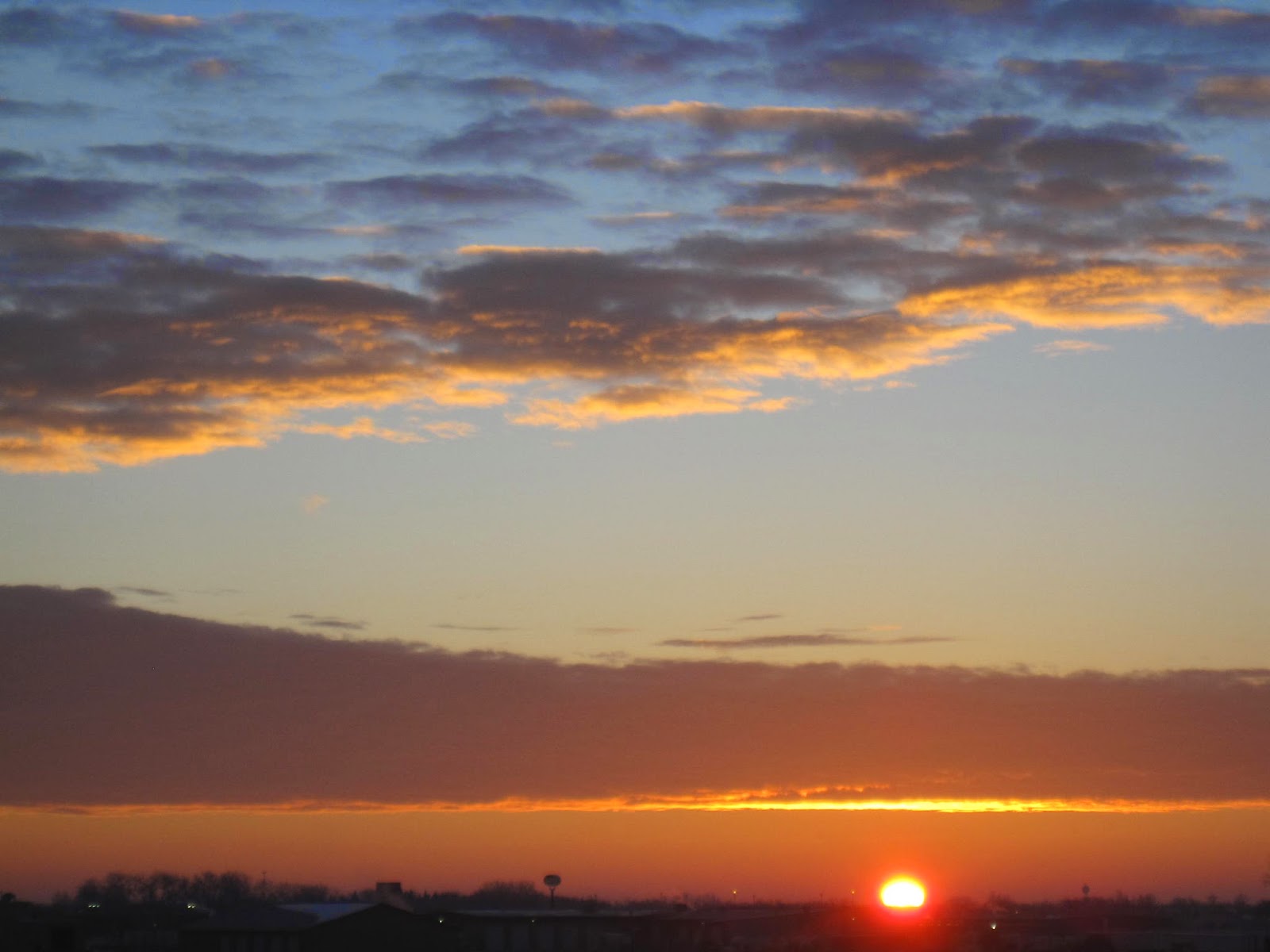 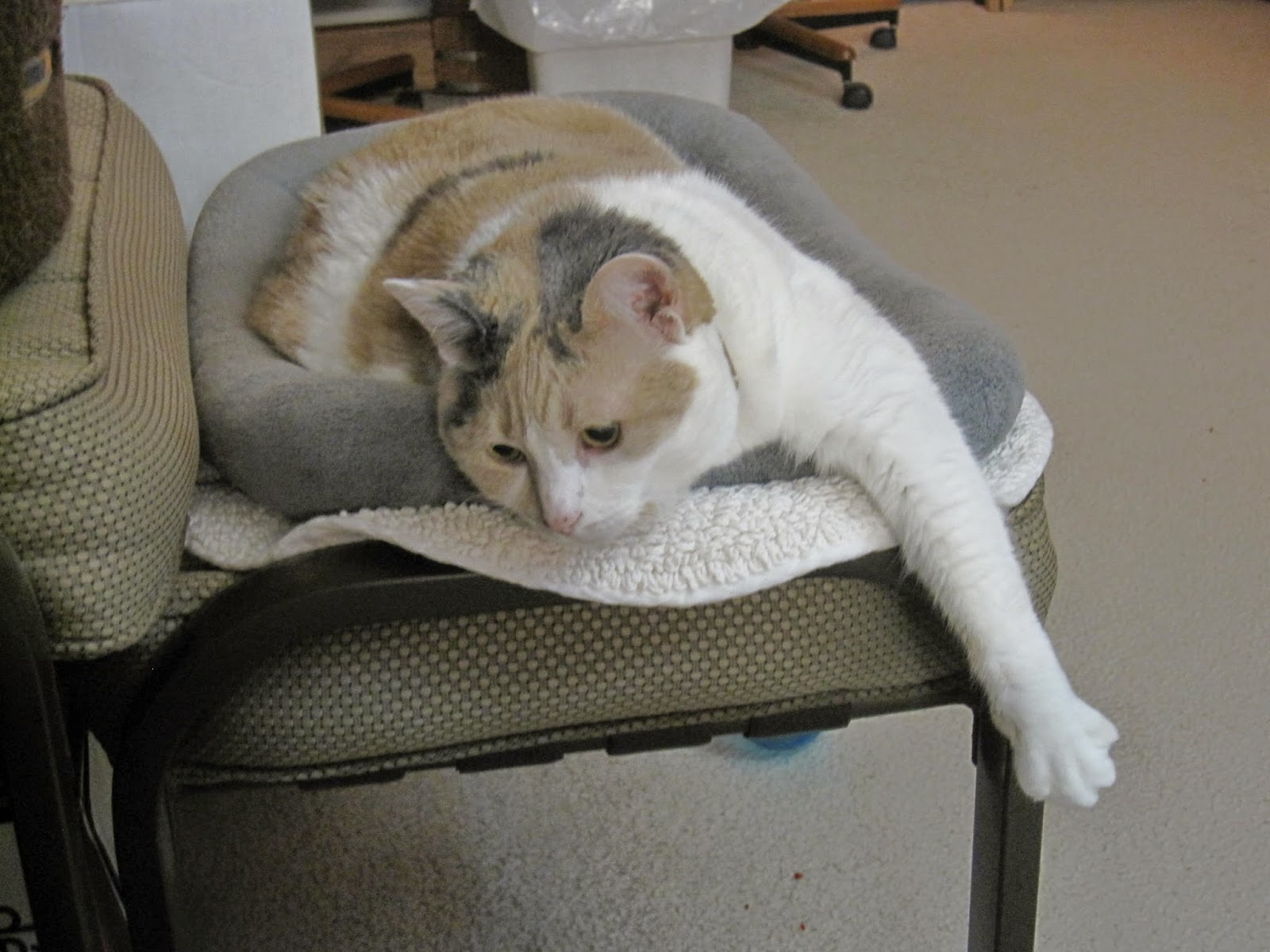 I went to leave to go over to McFamily's on Tuesday and the garage door wouldn't go back down.  As you know, I have had problems with the garage door since Dagan and Leah got the car running again this last spring.  They even finally had a garage door repairman come out this summer, but it still has been reluctant to open and/or shut.  Could take up to 4-5 tries sometimes to get it to work.  Just randomly stops cooperating at any point during the procedure.
****
So, I went to the office and a new younger guy I haven't seen before was sent out to look at the garage door.  Within about a minute he had adjusted the speed and told me it would work now.  Since I have heard that before...and I had Caroline coming to grocery shop for me the following day...I told him I needed to put the big white cart in my back seat just in case I couldn't get back in the garage when I came home that night.  He even put the cart in the backseat for me. Nice young man (who may have actually fixed the garage door because it has been working like a charm since then--knock on wood).
****
I head off to McFamily's.  Now I hear this ticking sound coming out of the vent!  What next, eh?  Tick-tick-tick.  Engine?  Heat vent?  Would stop when I was at a light...not heat vent.  Engine?  Oh no.  Last time I drove it the tires made clunky noises for a while because they had frozen flat on the one side sitting in the garage.  I was hoping this ticking sound would go away, too, after I drove for a while.  Nope.  All the way there.
****
So, I asked Leah if one of them could take the car to Costco to put gas in it for me after Dagan got home from work (not far away and they had suggested me getting gas there before because it is cheaper) and listen to this ticking noise.  So, meanwhile, it was Christmas card stamping and had some playtime with Mr. Ian.  Here he is in his jumpy seat thingie.  He has discovered squealing with delight since I saw him last.  They change from week to week.  :):) 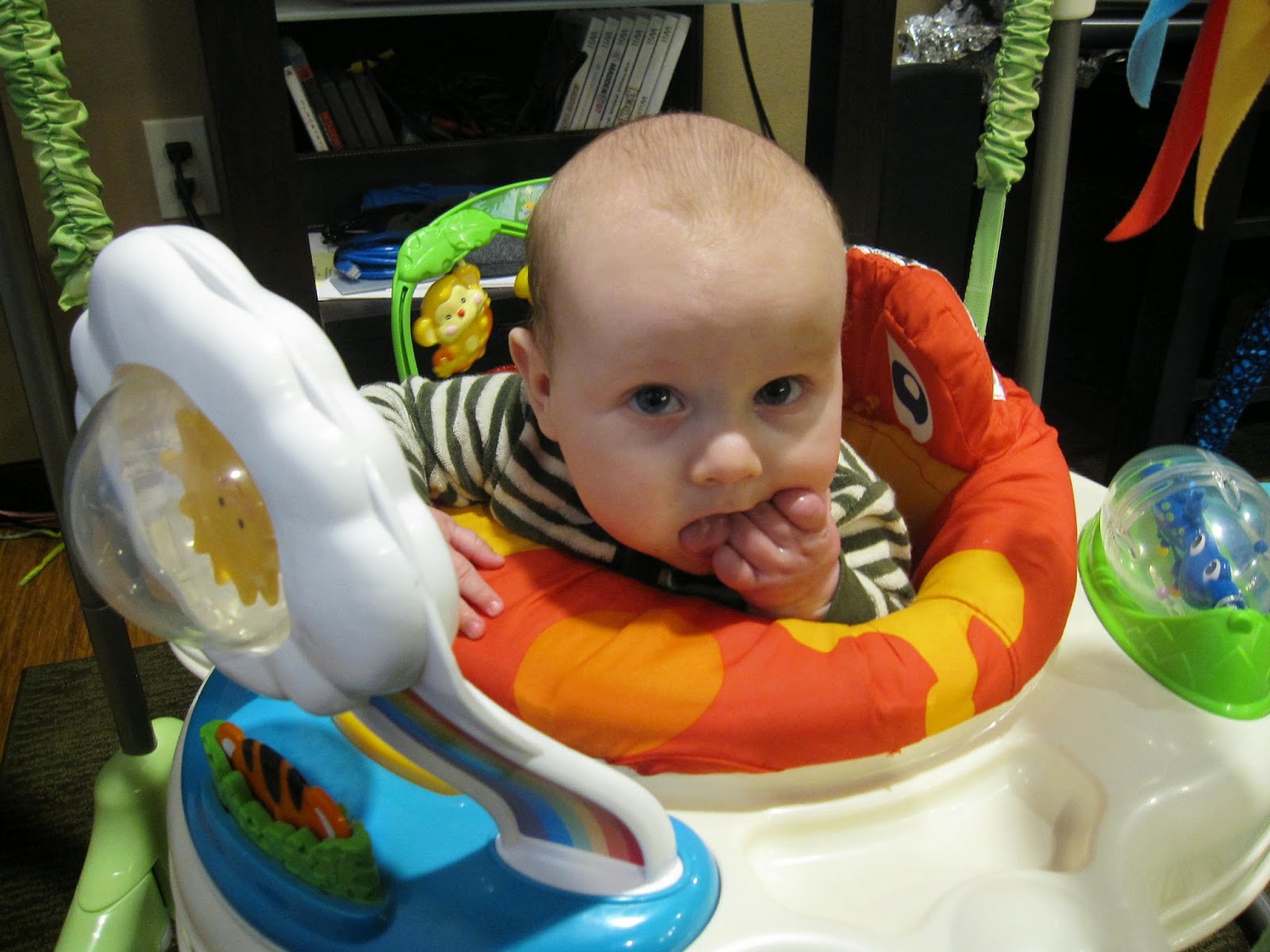 Dagan came home.  Leah and I left Ian with Daddy and took off for Costco.  Leah drove because she knew where we were going.  I was in the passenger seat.  The ticking started shortly after we took off.  OMG!!!  It was the white cart in the back seat jiggling in the little car!!  ROFLMAO!!!  Absolutely cracked me up!!
****
Backstory: I can't hear well at all out of my right ear.  My left one wouldn't win any contests, either, but my right one is really pretty bad.  Why?  Well, one night at a house party when I was a teenager I was dancing away with some girls in the living room when this guy tapped my shoulder for a dance as the music ended.  Fine.  The music started and so did he!  Clingy, grabby...this total stranger was professing his undying drunken love for me.  I laughed, extricated myself, told him he was just drunk, didn't even know me, thanks but no thanks, and went back to dance with the girls.
****
Next thing I knew I was thrown violently across the room.  I was body-smashed into the door--my ear cracked into the doorknob--and I crumbled to the floor--dazed.  While my crazy drunken new suitor tried to escape running down the block pursued by guys from the party, I remember gazing up at the glass doorknob in that old house and thinking how I had never noticed how truly beautiful it was.
****
So, I could have used the excuse all my life that I had been quite literally knocked silly at a young age, but I was already silly before that.  ;)  Sadly, I heard the guys caught Romeo and beat him up pretty badly.  He was just a drunken guy with anger issues.  Beating him up wasn't going to make him less angry...
****
I think he broke my eardrum.  For weeks I had gurgling and popping in that ear and couldn't hear out of it.  Never been the same and never have been able to hear well out of that ear since.  So that is why I got a distorted ear-view of where the sound was coming from in that tiny car.  It sounded like it was coming from in front of me out of the heat vent.  But in the passenger seat--I heard the sound coming from the back seat right away!  Burst out laughing!!  But what a relief that there wasn't anything wrong with the 22 year old car!!  :)  And I now have gas in the car.  First time it has been filled since they got the car running again this last spring.  Shows you how little I get out and about--LOL!
****
The garage door has been working, too.  I went out to get the cart before Caroline came to make sure--but it worked when I got home and that next day.  Don't even have to hold the button or the key the whole time, either, anymore.  Knock on wood!!  Maybe he fixed it?  Whoohoo!  And Caroline got my groceries for me on Wednesday--saved me money again because she can call me and ask me questions. Nice!!
****
I ordered Ian's highchair.  Early Christmas present.  It arrived at their place yesterday and Leah sent a Thank You Gramma picture!  He's fascinated by being able to sit and look out the window.  New perspective on life--LOL!  He hasn't had any solid foods yet, but that's probably coming soon. 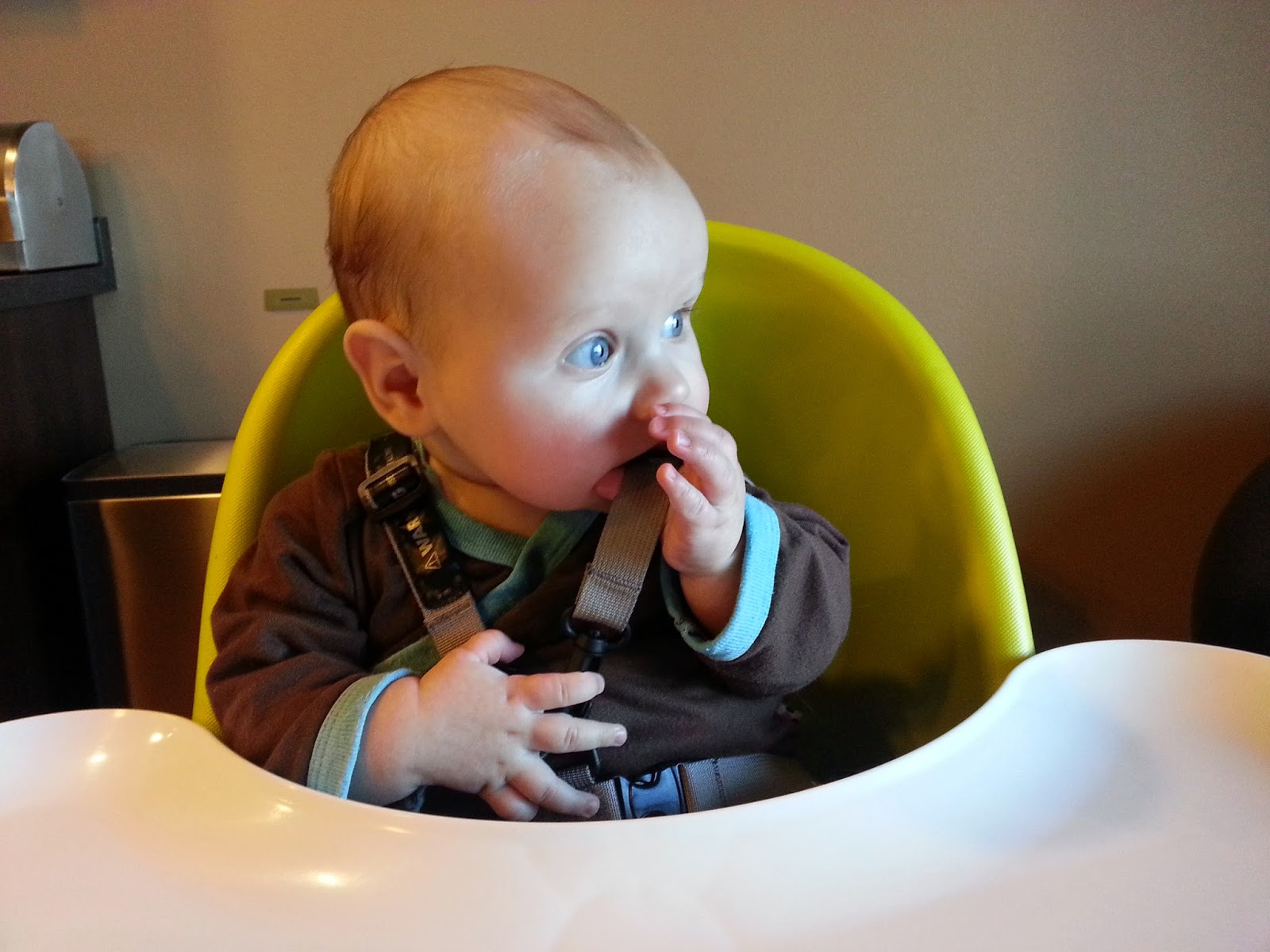 And I got Happy Mail!!  Actually decided to try making a box-opening video.  Thanks so much, Felicia (Mouse Potato Designs)!  I was shocked!  Obviously.  All I could say was--Oh My Gosh!  Oh My Gosh!


Who knows...I may get to making a few videos again.
Well, that's about it from Fargo for today.  Just a happy, happy day with Christmas carols on Pandora.  Life is good!
Have a great weekend!!
****
"Gratitude makes us feel bursting with delight, just to remember the gifts we have received. Thus we are doubly blessed when we receive something: for the gift itself and later, in recall, for the miracle of having been given it."
M.J. Ryan
Posted by Rita at 10:05 AM