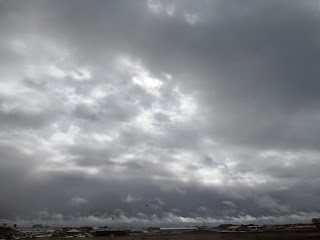 Thursday morning I had my appointment with Dr. Sleckman.  Because of all the recent changes they asked me to come in 50 minutes ahead of time to fill out paperwork.  The rheumatology department has moved and changed floors, too. 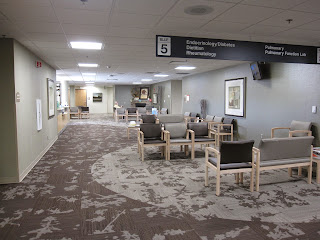 When I got there no one knew why they would have had me come so early because they had no clue what paperwork I was supposed to fill out since I've been coming there for years. 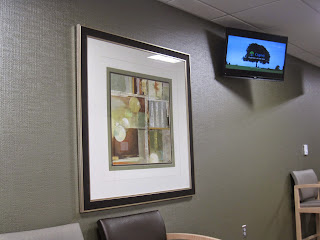 But everything happens for a reason, I guess. 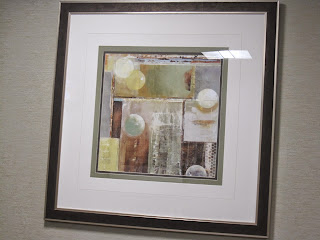 I always arrive early and had forgotten my cell phone.  I never forget my cell phone.  But I was really tired and sore...hadn't been sleeping well since I got the call from federal housing and had been up since 2:30am.  Apparently I had never checked the phone before I left, either.
****
Anyways--good news!  Dr. Sleckman will fill out the forms for Karma if I am accepted at North Sky (no pet building and I needed a doctor to say she's a companion animal I need).  He also gave me a new-to-me, non-narcotic pain and anti-inflammation medication to try out.  (I have troubles with meds quite often.)  After I was finished, had new appointments set up and got to the car I realized I had forgotten my phone (because I was going to text Leah to tell her I felt okay enough to drop off the DVD I rented for them to watch).  I was feeling so happy and relieved about Karma that I decided to drive over there even if I didn't give her a heads up.  If I didn't catch her before she went on her errands I had a key and I was too sore to stay long, anyways.
****
When I got there Leah was still home.
****
That's when I found out that my sister had been trying to call me all morning...and so had Dagan and Leah.
****
My folks had been in a terrible car accident that morning in Florida.  Apparently my dad died instantly.  (Thank goodness!)  He was in the passenger seat and they were T-boned by an SUV on his side.  He was pronounced dead at the scene by the paramedics.
****
My mom was in the hospital in critical condition.
****
Leah was wonderful!  She didn't leave on the errands, told me I could stay as long as I wanted, offered to make me food or something to drink--but I had no appetite (even though I hadn't eaten because of the doctor appointment).  I just sat in the recliner...numb.  Dagan called from work and talked to me for quite a while. They are such a blessing!
****
And Ian is just plain good for the soul. 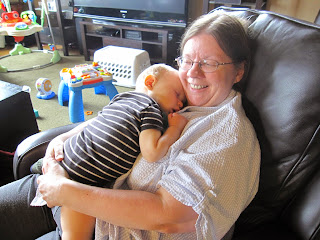 He came up and took a nap on Gramma. 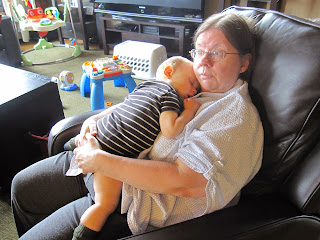 I think little ones and animals pick up on the energy shifting.  When I am there and Mama leaves the room to go upstairs and Daddy isn't home--Ian keeps and eye out until she comes back as he plays or he crawls over to the gate.  But Thursday for the very first time...Leah ran upstairs and Ian crawled over to me and wanted me to pick him up...and he just cuddled with me.  Put his head against my cheek.
****
Ian is good medicine.
****
I was so numb and drained--was going to try to wait for Dagan to get home but I figured I should get home to check my phone and emails while I had the strength left to drive--left before 3:30, I think.
****
My brother, Blaine, and sister, Renee, were flying down from Minneapolis right away that afternoon.  Eventually found out that Mom is doing okay!!  Better than expected, actually, with her multiple cracked ribs, bruising, and broken ankle.  I was able to talk to her on the phone in ICU on Friday morning and she's doing well, considering.  Was happy the chaplain had been there to see her a couple times and he was there when I called.  Mom sounded tired and weak, but in decent spirits.
****
Renee said the nurses loved her already and were surprised she was able to even sit up on Friday with minimal pain medication and all those broken ribs.  Said she must have a high pain tolerance.  (Does run in the family--LOL!)  The specialist doesn't think she needs to have a loose bone chip in her ankle removed, but she has a big heavy boot on her broken ankle.  I guess they don't wrap ribs these days.  Doctors don't think she has any internal injuries, either.  Wow!  Mom is supposed to be moved to a room today!  She doesn't remember anything until she woke up in the ambulance--so that's wonderful!
****
The last time I saw my dad was in 2013, because they left early for Florida last year during their summer visit to Minnesota. 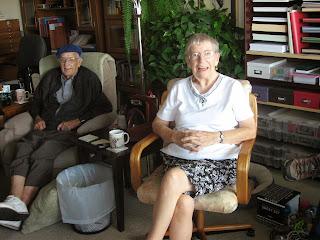 He was 94.  Mom is 86.
****
Honestly, this was a blessing in disguise for my dad.  His health has been deteriorating...congestive heart failure, pulmonary edema, legs swollen and weeping fluids...and he was more and more unhappy.  Not his old silly self the last year or two.  He hated being in the hospital (which he was in twice recently) or the nursing home (which he was in after his hip surgery when he was 90) or being stuck in a wheelchair (why he had hip surgery at 90).  So, now I just see him younger, healthy, telling his puns, flirting with waitresses, laughing and being silly.
Love you, Dad!  :)
I will miss you.
****
And Mom...she's another tough old Swede.  Good news there.  I do believe she is going to be fine.  Being alone will be quite a shift for her when she gets back home--but we are strong, optimistic, practical, stubborn folk.  I'll be calling her every day during her recovery.
Love you, Mom!  :)
****
That's kind of all I can manage for today.  I am so grateful to my brother and sister for being able to go down to Florida to deal with arrangements and be there for Mom.  Thank you, Blaine and Renee!  :)
****
Thanks to anyone and everyone who sends prayers, positive thoughts, and healing energy to my mom.
Life is precious.
Be generous with your love.  :)
****
"We are never more than one grateful thought away from peace of heart."
David Steindl-Rast
Posted by Rita at 9:38 AM