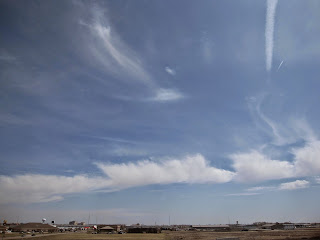 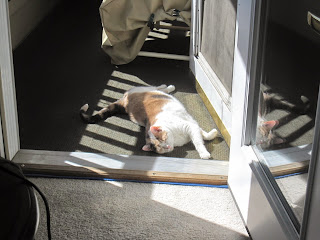 Karma soaked up the morning rays. 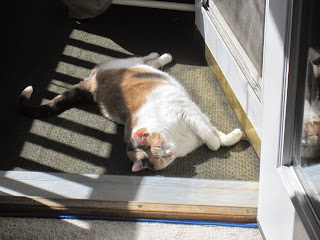 We were teased with clouds... 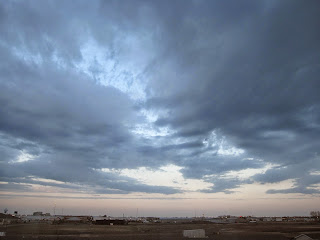 ...but one day there was actual thunder and lightning!  Got all excited!  But it only lasted all of about 20 minutes.
More please. 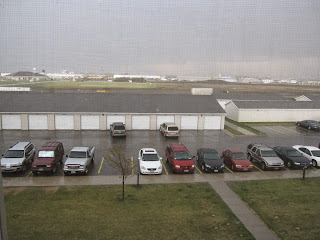 They have predicted the "possibility" of rain all the rest of this week.  Here's hoping.  That bit of rain greened it up really nicely, but we need a lot more before it becomes a dust bowl up here.
****
I finally got over to see McFamily briefly on Sunday.  Ian is not exactly sitting still anymore--LOL!  I had a terrible time getting pictures that weren't blurry. 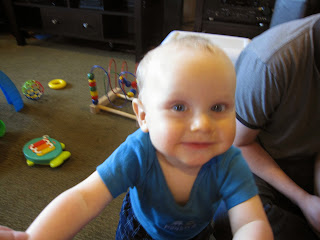 I was trying to get some pics of him learning to walk holding Mom's fingers... 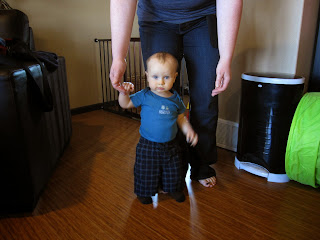 ...but I took like 30 pictures and these were the two that weren't very blurry. 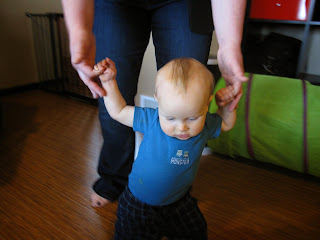 So I decided that, in that case, it is time to take more videos, right?  :)
****
First, though, I had planned to show you this one of McFamily in Japan on the back streets outside of their hotel.
And I am counting all those vending machines filled with drinks for the T Stands For Tuesday group over at Elizabeth's--LOL!  You must get bored seeing me with my red coffee thermos mugs every Tuesday, right?
****
Anyways, here's the short video of Ian "walking".  [Sorry about these two videos with the sound.  Apparently there's a microphone someplace I must be covering up at times with a finger or two--but I am loud, anyways, so it's not like you can't still hear me--ROFL!]
As soon as I turned off the camera Ian waved for the first time.  We all three hooted, clapped, laughed and startled the heck out of him.  I quick grabbed the camera to see if he would do it again.

Good job, Ian!
****
Okay...
Big, big, exciting news!!
Do you remember Leah and I making up this furniture floor plan last summer for my perfect apartment in the new North Sky senior buildings that are going up closer to Dagan and Leah's house?  One bedroom with den, facing east, on second floor, right? 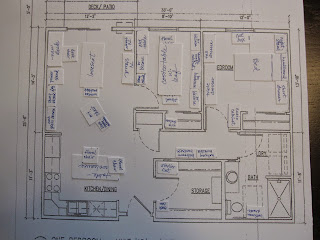 Well, I almost fell over when I got a call from federal housing yesterday asking me if I was still interested in a one bedroom with den.  YES!!  ONE BEDROOM WITH DEN!!!!  They had two of them still not filled on first floor.
****
[Now, as an aside--I have to tell you that I got that same negative feeling when she said first floor (don't like that feeling of cars shining lights in your windows and people always walking right close past your windows--been there, done that)...but out of the blue, that very instant I started to have a sad reaction, I got one of the "pictures" (or visions) that I feel are popped into my head by GA (my guardian angel).  I suddenly saw grandkids safely playing on the little cement patio and the grass right outside of the sliding glass door...never thought of that before...or how they'd never be able to go out and play when they were little on the balcony...slivers...dangerous...(neither would Karma, for that matter)...and I knew I was wrong and that it would be better to be on first floor.  Poof!  Never thought of those things before.]
****
Anyways, the first thing she asked me was did I have a lease and when was it up?  I've been here over ten years and I think I only have to give 60 days (actually I heard afterwards from another resident who's been here longer than I have that it's only 30 days, but I absolutely would like 60).  So she told me to call a lady named Sherry and arrange for a viewing.  I had forgotten to ask which directions they faced.
****
Of course, I immediately called Leah to ask her if she was open this week to go look with me...and to apologize ahead of time for being such a burden because they would have to move me (but they still say not to worry about it).  Who would have ever, ever thought I'd hear from them this year?!  Remember I was #98 on the list for a one-bedroom and #53 for my preferred one-bedroom with den, as I recall.  Something like that.  And there are only 24 apartments in the first building!!   But that lady I had spoken to long ago, Heather, had recommended me, she said.  :):):)  And I know how all of you had sent prayers and good thoughts for me, too!!!  Do you believe this!!??
****
Leah was open this week...so I called that Sherry...and Leah, Ian and I have an appointment for this afternoon at 1:30pm!  There are two one bedrooms with dens and two two bedrooms open.  I don't qualify for a two bedroom...and one of the ones-with-den was more expensive than the other one so we needed to check with my worker as to what my limit was.  One had a single garage and one had a double.  And I forgot to ask about direction on either of them (heat and I don't get along well and west is a bear up here--hot in the summer and freezing wind in the winter--awk!)
****
So, all day I am thinking about whether I could handle facing west...for the rest of my life basically...and fantasizing about a place that "if you get there before I do there's a bench to sit on in the entryway".  Such a simple thing.  A bench.  Furniture!  Unbroken furniture.  They will probably have pictures on the walls and maybe a fake plant or two...like we used to ten years ago when I was first here.  Ahhhh!
****
And then it got even better!  Sherry called me back last night to ask more questions about which one-with-den I would qualify for because they had someone else interested in the other one.  I had already drug out everything I had from last year (of course!) and had been drooling over the floor plan so knew the limit my worker had given me at the time.  And the one-with-den that I qualify for has the two-car garage!!  Whoohoo!  More storage space!!  (Makes you wonder why the cheaper one would have the two car garage?)  And...I remembered to ask her which direction that one faced and she said...EAST!!!  I whooped and I think I startled her as much as I had Ian the day before--LOL!
****
Honestly.  I can't quite believe this is even real!  This morning it almost felt like I had dreamt it, you know?  But Leah was so excited...and knew I have not been feeling that well...so she ran over to find the place and took pictures of the outside of the building for me last night and sent them to me.  Awww!  East side...faces garages for the adjoining apartment complex.  But the car parking is on the west side--tada!  So this looks much more private than I expected for living on first floor, doesn't it? 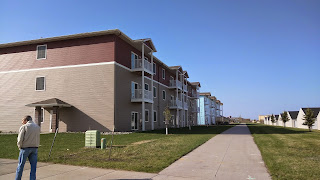 I believe that is a walking path right there, but I'm not positive.  There's supposed to be a walking path somewhere close to the buildings and that sure doesn't look like a regular city sidewalk.  ??
****
So...today we shall be going over to see if this feels like "the" new home for me and Miss Karma.  I have moved so many times in the past that I always trust my gut feelings about a new place to live--and I never know for sure until I am right there walking through the place.  Seems doubtful that I would have bad vibes about this place, but you never know.  Have to keep an objective mind and heart, right?  Dagan had a meeting this afternoon, couldn't take a late lunch to come with us, so asked us to take lots of pictures.  :)
****
This furry lady has no clue what might be in store for her this summer. 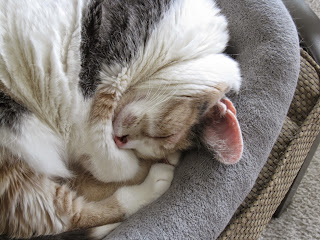 So, that's what's happening here in my little corner of the world.  :):)
****
Oh, and before I forget...tomorrow is the 50th anniversary of the Fridley tornadoes!  I was in the Junior High participating in the Science Fair...walked home inbetween tornadoes.  You can read about the basics here and see some images here.  I had been planning to share my personal memories of that night today, but I am too excited about North Sky Senior Apartments, to be honest.  So, I'll have to tell you soon.  If I can pull it off--tomorrow--on the actual date.  And then I can tell you what happened when we saw the apartment, too...and show you some pictures!  Whoohoo!!  But, if I do, it will take me all day to write it, so I might not be posting till evening.  I'll try.  :)
****
So, hopefully might see you tomorrow.
THANK YOU!!!
THANK YOU!!!
THANK YOU!!!
I honestly felt all the positive energy from all of you just wash over me when I got that call yesterday morning.
You're the best!!!
****
"Let your dreams outgrow the shoes of your expectations."
Ryunosuke Satoro
Posted by Rita at 8:23 AM