Fooled you!  I usually start out with some sky pics.  Don't worry.  I do have a few.  LOL!  But boxes are what I have mostly been seeing lately.
In the living room... 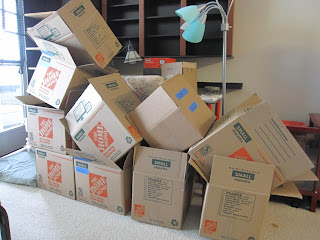 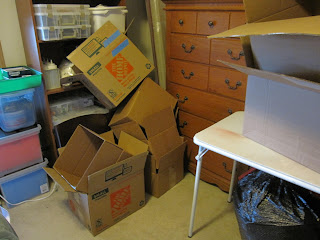 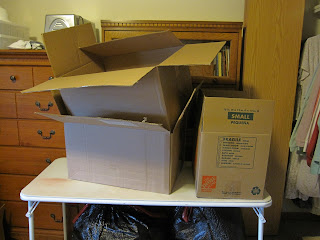 Told you Dagan put together a lot of boxes for me.  :)  Ian was back to normal--acting and temp--so they headed off to Canada for their scheduled visit.  I have been resting and packing.  I try to pack some of them right where they will be stacked so I don't have to lift them. 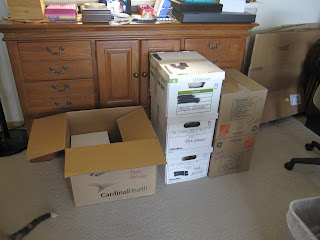 Not much else happening up here.  Here's action shots of Miss Karma petting her own self... 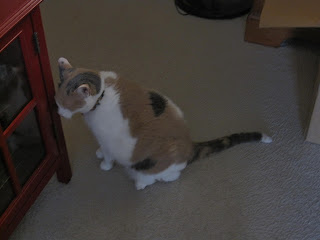 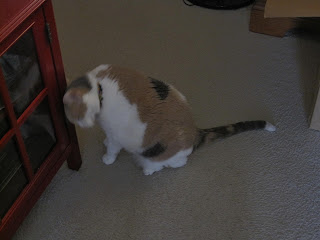 She's been wandering about the apartment crying at random times...even 3am!  Leah's going to bring us over to the vet's for her shot updates on Thursday the 23rd at 10am.  Only appointment I could get in July.  (I hope she behaves and doesn't have flashbacks from her hospital stay where she went feral in fear.)
****
I have often been unable to get back to sleep after 4-5 hours, so have been awake to see far too many dawns.  Only got pics of this one, though.
Predawn. 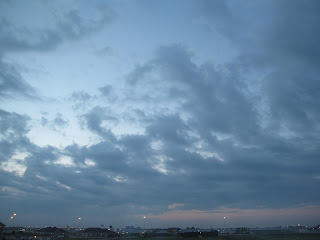 We still had the orange ball of a sun... 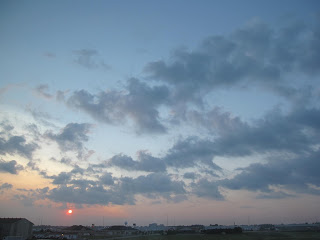 ...from the Canadian smoke. 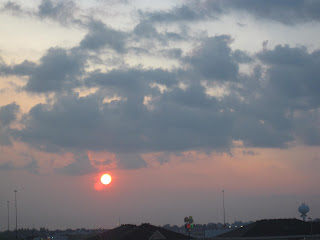 When my packing gets too stressful for Karma she naps outside on the porch in the heat for a couple hours...or she hides under the bed. 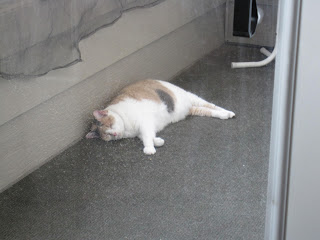 I keep plugging away.  Emptied and packed the triple dresser and my desk.  The skinnier box in the front is a new laptop table!!  Not opening it, of course.  (Not that I didn't want to--you know how I am like a little kid with new stuff--but Leah put the kibosh on that idea--LOL!) 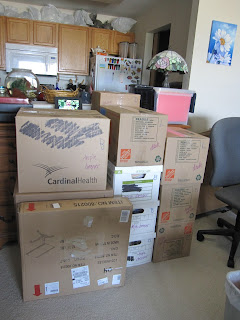 Pic from last night.  The five boxes to the left are packed and labeled... 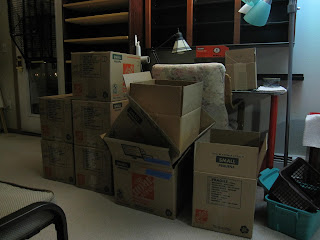 ...from the craft bookcase. 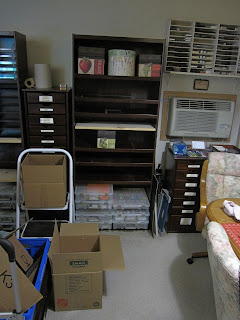 Just have some of my pretty boxes left to pack that had been on the top of the bookcase...and the satchels, of course.  Just don't have the right size boxes for those square satchels.
****
This weekend I hope to pack up the ink pad shelves and my ink bottles from my pen case in the bedroom.  Not sure if I will get much farther than that.  The longer this cleaning and packing goes on the quicker I hurt and the more recovery time I need...and I am starting to not care if the supplies going into boxes are dusty, so you know I am fading fast--LOL!  But next week Leah will be coming over to help with the kitchen and pantry.  Caroline is coming over on Thursday to clean.  And whatever I have done by next Sunday night--that is it for me.  One more week.  The packers can deal with whatever is left.  My only concern will be gathering up whatever I need to kind of live out of a suitcase for a while.  :)  and to make sure I have all the address changes done and utility changes set up.  (Having trouble finding internet provider because it's all so new over there--may have to go with the dreaded CableOne--awk!--find out this coming week.)
****
Well, and Miss Karma, of course.
She is always a concern.
Still barfing now and then. 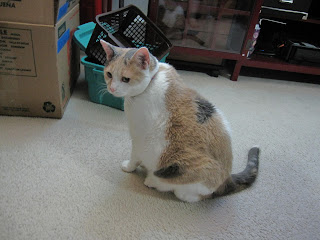 She really doesn't understand what the heck is going on.  Has been needing a lot more cuddle time than Miss Independent would want me to admit to you.  ;)
****
On my many breaks I have been watching Leave It To Beaver on Netflix streaming.  They're canceling it on streaming on 7/30 it says.  (Sure--when I just found it...and have a grandson I'd love to show it to when he's older.)  I was absolutely glued to the TV when Beaver was on!  The music just made me excited as I would settle in on the floor in front of our big console TV.  Beaver was on from 1957-1962--when I was 6-11 years old.  He was about my own age (3 years older) so I felt like I grew up with Jerry Mathers.
****
I remember thinking that the seasons used to go on and on, episode after episode...and I was not old-lady-mis-remembering.  Each of the six years Beaver was on--39 episodes!!  Do you believe it!?  Can you imagine them doing 39 episodes a season now?  I am loving watching Wally and The Beav...and smarmy Eddy Haskell...and Ward and June...all over again.  I'll watch as much as I can the rest of the month.  Probably be lucky to get through the first season--LOL!
****
Did anyone else love watching Beaver?  Was my favorite show when I was a kid.  Of course when Andy Griffith came on (1960-68) then it was a tie.  (Andy Griffith Show went from 32 down to 30 episodes per season in seven years, BTW.)  At least Andy Griffith is still on streaming.  I checked, of course, after finding Beaver.  So you know next month there will be some whistling along to that theme song going on in my new place.  ;)
****
Well, as soon as I have thawed out a bit more I will see if I can do some more packing today...or if I need a day off.  (Can't tell anymore till I try.)  Have a great weekend.  You know I'll be spending some time with The Beav today--LOL!  :):)
****
"Do all you can with what you have, in the time you have, in the place you are."
Nkosi Johnson
Posted by Rita at 12:28 PM