Quick hello!
Miss Karma and I are moved!
First post from North Sky!! 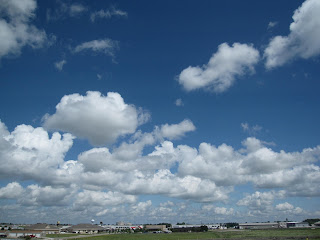 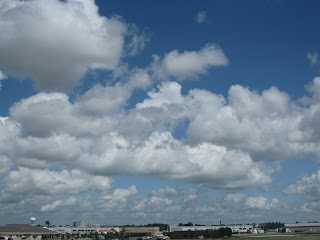 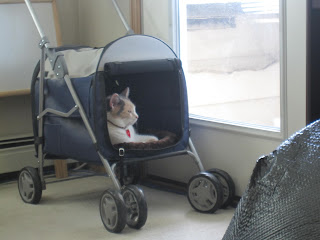 ...Karma relaxing in her stroller by the porch door. 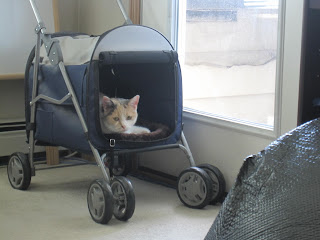 I must say, moving day went so well.  Dagan brought Karma and I over to the new North Sky Apartment early in the morning.  Linda had given the movers the wrong address so the Five Star moving truck had actually just arrived over here at the new place when we drove up.  We directed them to the old apartment.  Not their fault.  And they were absolutely marvelous!  From start to finish took about 6 hours!
Whoohoo!
****
Dagan and Ian dropped Karma and me off and then went home until they brought lunch for Leah and me.  We had hauled over quite a few things to the new place the day before--like a chair of Dagan and Leah's (in a pantry pic below), a few boxes, the fish, Baby Phil, etc.  That morning Dagan carried in the cat box, Karma's food, my suitcase, and some of the last minute packing stuff.  After Dagan and Ian left I let Karma out to wander about.... 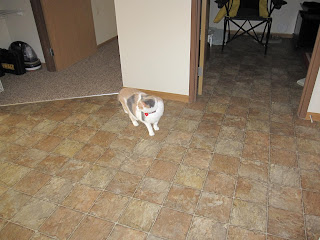 ...and look over all the empty rooms, which she did quite quickly. 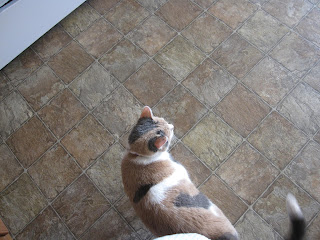 Definitely decided she didn't like all the open space--LOL! 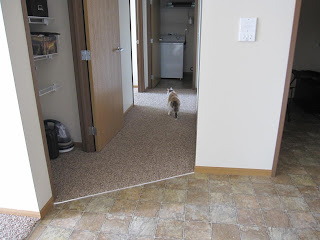 She stayed in the pantry and wouldn't come out once she'd cased the joint. 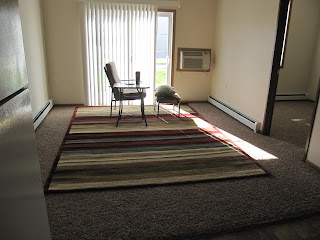 After all, she is used to a very packed apartment--so all that emptiness gave her the creeps--LOL! 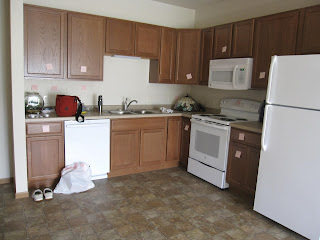 When Leah texted to say they were on their way I moved the chair, ottoman, and the TV tray into this pantry/storage area, too.  For quite a while Dagan, Ian (in his car seat), Karma and I were all packed in there with the door shut.  The pantry still smelled like french fries the next day--LOL! 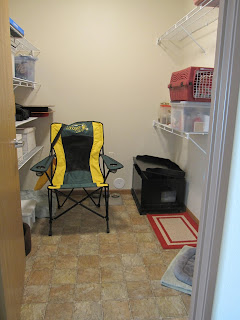 Karma had her food and water and cat box, so she was all set. 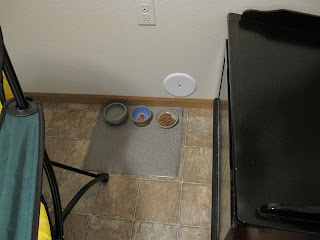 But it didn't matter.  She just hid way back inside of her stroller the entire time the moving men were here...for hours...even after everybody was gone she still had to be persuaded to come out when it was only me here.  But when she saw the place was full of stuff--boxes and familiar smelling furniture--then she became fascinated...well, in a cringe-y sort of way.  I think she checked out every inch that night.
****
She stuck close to me, wanted to be held a lot, and I'm not sure she ever left the bed during the night those first two nights.
****
Here's the first morning pics at North Sky. 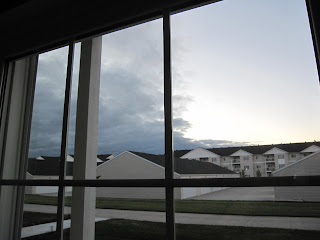 I can still see quite a bit of sky... 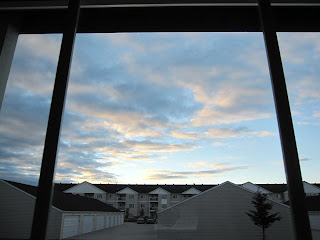 The first morning Karma followed me around, howling, staring at me, and crying for a good solid hour.  Was definitely..."Take me home!  I want to go home!"
****
Remember how Karma liked hiding in the desk cubby hole at the old place when I had emptied the desk? 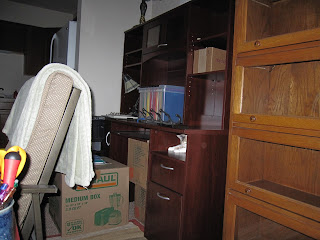 Well, she sat under there and cried till I lifted her inside (too narrow for her to jump into from the floor) and she slept in there for a couple hours.  Reminded her of home, I imagine. 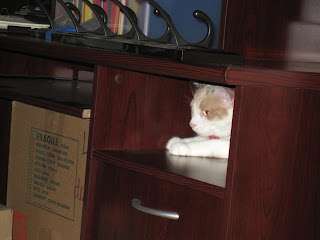 This is my view from my chair in the living room.  Not bad!  Be a little wider once the stack of boxes on the left is gone, too.  :) 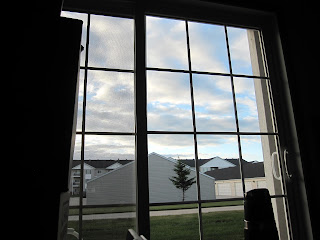 I went with Leah out to the garage with some things, had my camera, but was so tired I forgot to take any pictures.  So on her next trip out Leah took some pictures for me. 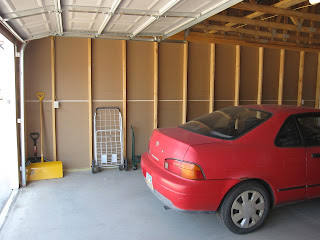 Those four strong moving guys moved the big metal rack of shelves all in one piece! 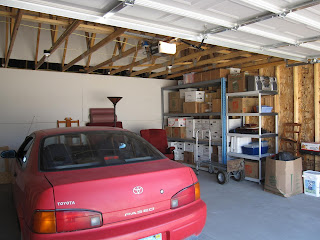 They moved the desk and my craft table all in one piece, too. 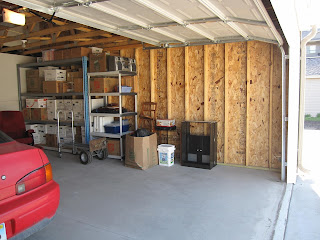 Wow!  What a lot of room in a double garage! 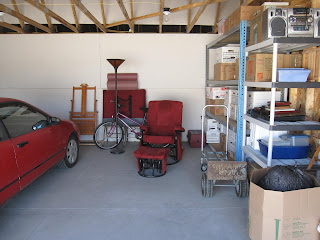 At least half of those boxes are full of art and craft supplies. 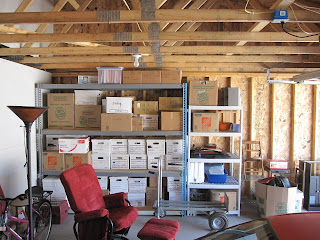 I didn't even get a video made until this morning.  So, it isn't quite as cluttered as it was on moving day, but still basically pretty much the same.  I think we only took out four empty boxes and shifted things around so it's easier to walk through.  :)

I am so glad I found the little gorilla tripod so that I could use that to hold the camera so I didn't have all the sound issues.  Who knew repositioning your fingers on a camera could make that much noise or block sound!  Or maybe it's my camera that's too sensitive?  Anyways, the gorilla do-dad worked like a charm.  :)  I'll have to try to remember to use that whenever I make videos from now on.
****
Karma is markedly more relaxed already after three days.  She's still wanting a lot of cuddle time and she still tends to follow me around...but it's already not nearly as much as it was.  She's adjusting well.  No barfing so far that I have seen.  She's still not eating well--but I'm sure that will improve, too, over time.
****
I am recovering from the move, of course.  Just doing a little puttering every day...baby steps for sure again.  :):)  Got internet last night.  Found out that I am stuck with CableOne only because they have a contract with the building--which is the case sometimes.  I guess when you are inept and more expensive you have to force people to be customers--LOL!  Even the guy that hooked up my internet...well, he screwed the cord onto the box & into the wall, never double checked, and my service was never actually activated.  Dagan found that out in the evening when he had to call tech support.  Duh!
****
Oh, and the reception for my cell phone is terrible here.  One bar--so lost calls and texts that sometimes won't send or let me read them.  :(  Leah said it might be because of the aluminum siding on all the buildings.  I might need some kind of signal boost contraption.  ??  I hope we can find something that works well.
****
And we're still trying to figure out a way for me to avoid having to use CableOne for TV.  I'm checking out Hulu right now--and I already have Netflix--and some shows I can watch for free online.  I'm going to try that for a while and see how it goes.  When you're basically housebound you really want internet, cell phone, and some movie & TV access.  They'll figure something out.  I trust my tech support.  ;)
****
That's about it from Fargo.  Karma and I will be quietly enjoying a box-filled weekend.  Dagan and Leah will be working on landscaping.  I'm going to try to rest, maybe do some baby-stepping, catch up some online, deal with more moving changes/paperwork, and investigate Hulu options.  :)
****
Enjoy your weekend!!  :):)
Hope to be back on Tuesday.
Love my new home!!
****
"Success is the sum of small efforts, repeated day-in and day-out."
Robert Collier
Posted by Rita at 1:50 PM