Good Afternoon!
This is the view out the window this beautiful fall afternoon--69 degrees and sunny. 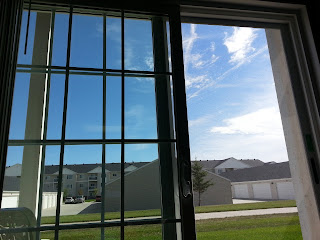 A couple days ago Karma woke up to a little gift that was left just for her right outside the patio door. 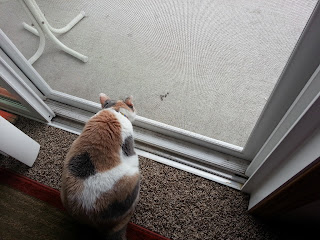 She'd press her head against the screen in an attempt to get a closer whiff. 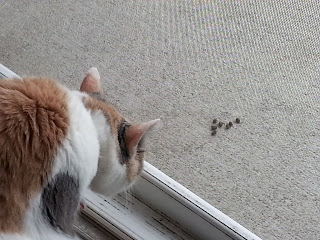 Looks like it's probably baby bunny poo, but I'm not sure.
****
Karma stayed near the screen door all morning--watching, waiting, and hoping the mystery creature would return. 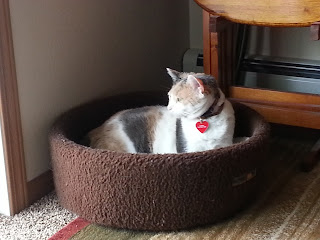 Since it has been a little chilly, she's been appreciating the comfort of her big brown bed once again. 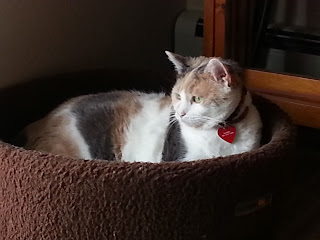 Well, my arm was bothering me so badly I couldn't write letters or type for more than a few minutes until Thursday.  Before Dagan and Leah showed up yesterday I did finally unpack what I could.  My desk was full of pottery and jars and canvases (on top)... 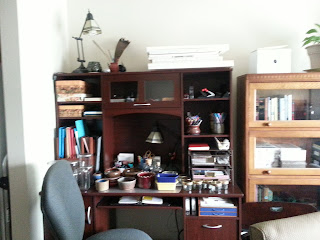 ...got most of the stacks by the studio door dwindled down... 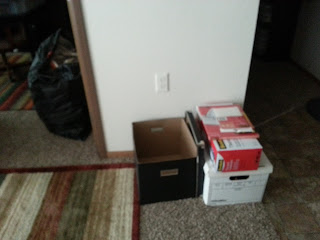 ...found one small box with paints and sprays to put away in the wall shelves... 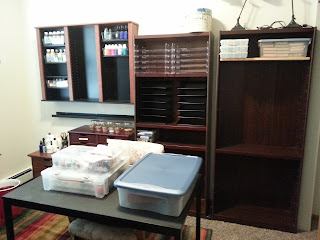 ...still had a mess on the kitchen table Friday morning. 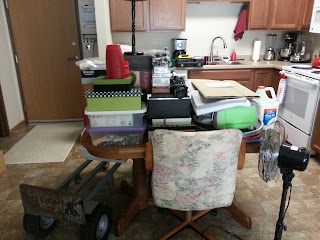 Even half the kitchen counter was full of Leah's tools and hardware. 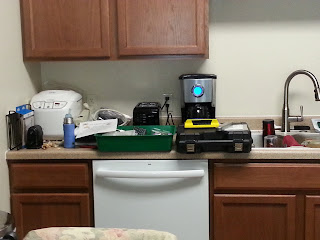 While unloading boxes I had partially filled a big black trash bag with crumpled newspapers we had used for packing.  Karma was feigning lack of interest, as cats do... 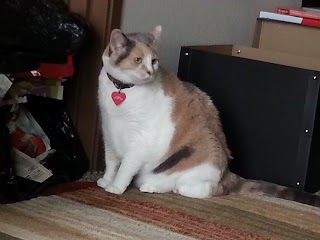 ...but she disappeared inside the bag when she thought I wasn't looking. 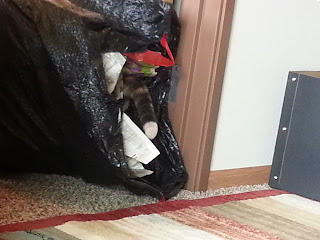 Before McFamily arrived last night I just started shoving stuff here and there to partially clear off the kitchen table. 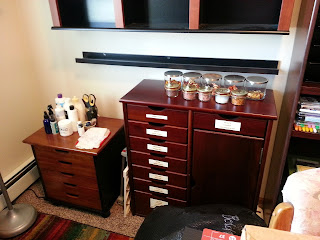 Didn't matter where I stuck things...just wanted to clear some space. 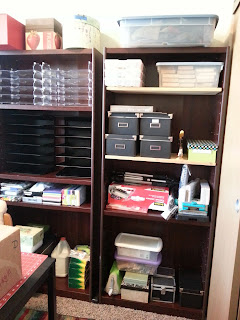 Leah taught me how to make a veggie-pasta-pesto dish and we had that for dinner.  Yummy!  Dagan brought in load after load of boxes from the garage. 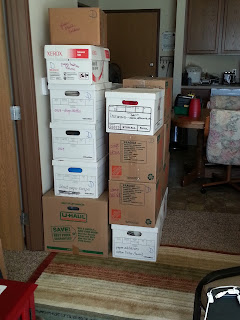 He thought he had gotten everything that wasn't marked "G" for garage. 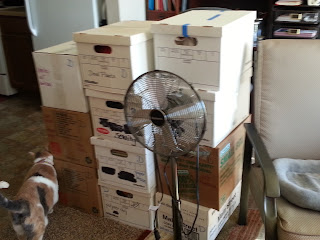 There are boxes piled everywhere, as you can see. 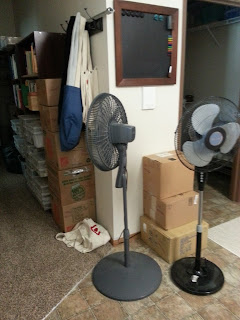 But now I am really free to organize!!
****
It's difficult to organize when you don't know how much space you need for this or that and so much of this chaos is going in different spots.  Fun--but challenging!
****
They got the power strip behind the bookcases on the wall by the door... 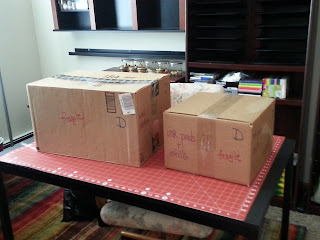 ...and Leah put together the black wire cubes in the closet... 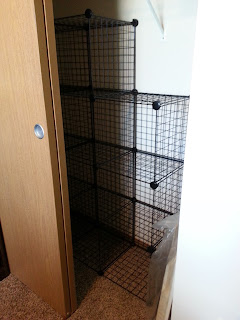 ...while Dagan hauled in boxes--tada! 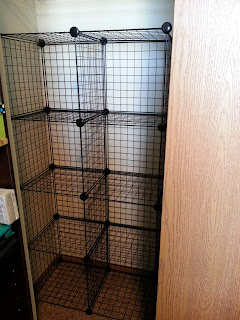 So, now I will be able to organize all my toys!!  I have my work cut out for me, don't I?  But I am SOOOO excited that this is the last of the unpacking!  Then all that's left is to rearrange a bit in the garage before the snow flies.  There will be room out there now for Dagan and Leah to store some things out in my garage, too, so that they can get both cars in their garage this winter.  :):)  So nice to have some extra space to help them out.
****
Even though all but one of the little poo-balls has dried up and rolled away in the wind, Miss Karma keeps watch. 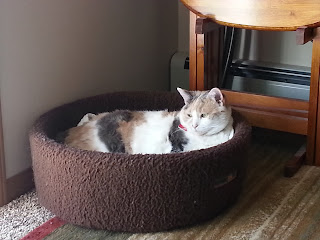 And you know what I'll be doing...putting the final room together in my dream apartment...ahhh!  "Studio" Baby Steps here I come.  :):)  Enjoy your weekend!
****
"If you have built castles in the air your work need not be lost. That is where they should be. Now put the foundations under them."
Henry David Thoreau
Posted by Rita at 2:05 PM